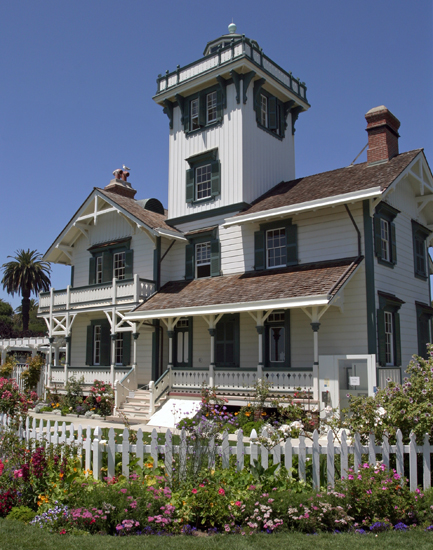 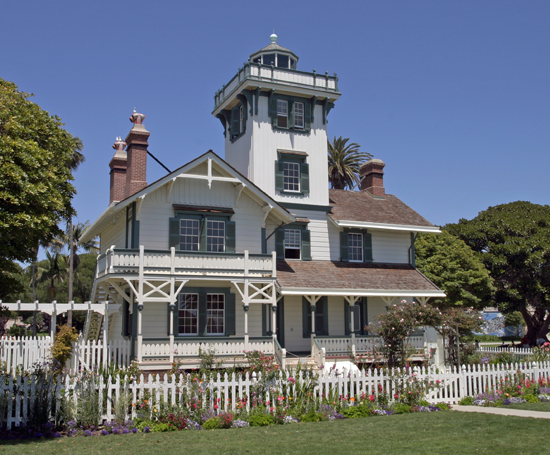 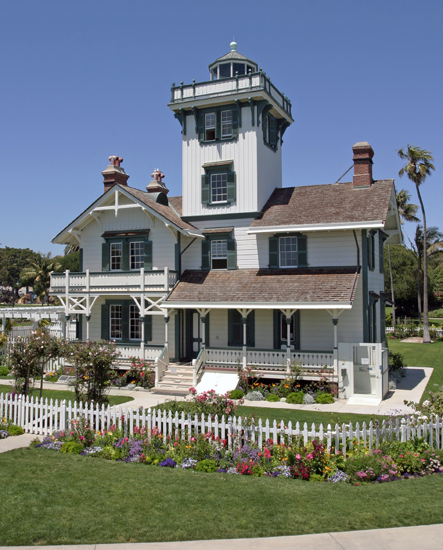 In 1792, British explorer George Vancouver stopped at the Carmel Mission near Monterey and met Father Fermin Francisco de Lasuen, who had succeeded Father Junipero Serra as father-president of the California missions. Vancouver was impressed with Father Fermin, describing him as about seventy-two years of age, whose gentle manners, united to a most venerable and placid countenance, indicated that tranquilized state of mind that fitted him in an eminent degree for presiding over so benevolent an institution. When Vancouver sailed into San Pedro Bay the following year, he named Point Fermin and Point Lasuen in honor of the Franciscan Father. Lasuen was unhappy in California, stating that only obedience kept him there, but his name will now be forever linked to California and its Point Fermin Lighthouse. The harbor at San Pedro, which is overlooked by Point Fermin, started to boom in the late 1840s as Los Angeles grew. A site for a lighthouse at San Pedro was selected in 1855, but want of an approved title to the site delayed the project. Southern Californias first railroad, the Los Angeles and San Pedro Railroad, was built in 1869 and consisted of a twenty-one-mile stretch of track connecting Los Angeles with the bay. When the railroad went into service, a request was made to the Lighthouse Board for a lighthouse on Point Fermin to mark the harbor.

A site on the bluff was selected in 1872, after Congress appropriated $20,000 for a lighthouse and fog signal in June of that year. As the desired parcel had multiple owners, with several being minor heirs, purchasing the land proved impossible, and condemnations proceedings had to be carried out under California law. The suit resulted in a favorable ruling for the government on November 4, 1873, and work on the lighthouse commenced on February 21, 1874.

The redwood and fir needed for the project were delivered by ship, and by late fall of 1874, Point Fermin Lighthouse was finished. In addition to the lighthouse, the station included two large cisterns and various outbuildings, all of which were enclosed by a substantial fence. The lighthouse had its inaugural lighting on December 15, 1874, when the first keepers, Mary L. Smith and her sister Ella lit the lamp inside the fourth-order Fresnel lens and wound up the weights that rotated the lens and produced the lights characteristic of alternating red and white flashes, spaced by twenty seconds.

The ornate Victorian lighthouse is similar in design to the original Port Hueneme Lighthouse, built just up the coast, and the Hereford Inlet Lighthouse in New Jersey. Mary and Ella Smith transferred to the arid climate of Southern California from Ediz Hook Lighthouse in Washington, but after eight years at Point Fermin, the sisters resigned, saying the life was too lonely, something that is hard to imagine given the areas present population.

Mary and Ella were not the only pair of sisters to care for Point Fermin Lighthouse. Keeper Willie Austin took up residency at the lighthouse in 1917 with his wife and six children. The family soon added another child, Paul Fermin Austin, but after eight years at the lighthouse, tragedy struck when Mrs. Austin died following an operation. Two months later, Keeper Austin followed his wife to the grave, dying of a broken heart. Rather than leave the lighthouse, Thelma, the oldest daughter, and her sister Juanita decided to look after the light, reasoning ...we had a sacred duty to perform: to promulgate the heroic work which our parents started. Thelma kept the light until 1927, when the Los Angeles Park Department struck an agreement with the Lighthouse Service that permitted a park superintendent to live in the dwelling in exchange for looking after the now-electrified light.

Point Fermin Lighthouse remained active until December 9, 1941, two days after the attack on Pearl Harbor. Most lights on the west coast were extinguished during World War II to avoid aiding Japanese submarines, which were occasionally spotted offshore. Shortly after the light was deactivated, the lantern room was removed, and the top of the tower was converted into a box-shaped lookout tower, known locally as the chicken coop and used for spotting enemy vessels. After the war, a light on a metal pole close to the edge of the bluff replaced the lighthouse.

The Coast Guard considered tearing down the lighthouse in 1972, but Bill Olesen, who first visited the lighthouse when he was eight and had lived and worked near the lighthouse for years, came to its rescue. Olesen recruited John Olguin, coordinator of the Cabrillo Marine Museum, to join his crusade, and together they led a campaign to save the light that started with having the ninety-eight-year-old lighthouse added to the National Register of Historic Places in June 1972. During the next two years, the chicken coop" was removed from the top of the tower, and using the original blueprints, extensive restoration was carried out and a new lantern room was built. According to Olesen, the exterior restoration was completed about 15 minutes before the centennial celebration, held on November 2, 1974.

Dick Denham, a forty-something bachelor and employee of Los Angeles City Parks and Recreation Department, lived in the lighthouse in the 1970s and enjoyed climbing to the top of the tower during storms. I know its crazy, he said, but I really enjoy watching the white caps and the ocean pounding down on the shoreline. Lightning and thunder make it all the more exciting. While he wasnt afraid of storms, ghosts were another matter. Ive heard footsteps up there, he said pointing to the tower, but Ive never found anyone. During his residence, curiosity seekers would come to his door at all hours of the night.

In 2002, a $2.6-million-dollar face-lift was initiated on the lighthouse. The makeover was completed in 2004, and the before and after pictures are quite dramatic. In addition to a new coat of paint, the lighthouse also received new plumbing, electrical work, alarm systems, air conditioning, and period furnishings. Point Fermin Lighthouse is now the crown jewel of Point Fermin Park and has opened its doors to visitors after having served as park employee housing for years.

In preparation for the lighthouses centennial celebration, Olesen and Olguin attempted to locate the Fresnel lens removed from Point Fermin Lighthouse just before World War II. While in a restaurant one day talking about the lens, the pair reportedly met someone who knew the lens whereabouts. This tip led them to the real estate office of Louis Busch on Pacific Coast Highway in Malibu, where, sure enough, a fourth-order Fresnel lens was on display.

When contacted, Mr. Busch did not believe his lens was from Point Fermin Lighthouse. From what Busch knew, the lens had been displayed in a nautical museum on Santa Monica Pier established by Cap George Watkins, who worked as a lifeguard captain in Santa Monica. When the pier was damaged in a storm, Watkins took the lens to his home near Malibu for safekeeping. Then, after Cap Watkins died, his son took the lens to the real estate office of Mr. Busch, a family friend, and presented it to him.

Whether the lens had been used at Point Fermin remained unresolved for several years. When Kristin Heather was made curator of the lighthouse, settling the matter was one of her goals. Is it ours or isnt it? If it is, lets prove it and not have to worry about it anymore. I dont want to have to deal with this for the rest of my career, said an exasperated Heather.

Joanna Nevesny, a member of the Coast Guard Auxiliary, stepped in to serve as an intermediary in settling the issue. Armed with a historic 1912 photograph of the Point Fermin lens along with a digital picture of the one on display in Buschs office, Nevesny and Jim Woodward, a Fresnel lens expert, set out to positively identify the lens. As the lens had been crafted by hand, the slots in the screw heads ended up in somewhat random positions. Woodward found that every screw slot was exactly the same in the two photographs. It was like the fingerprint, or DNA, of the lens. There is no other lens on the entire planet that has their screw slots in this same arrangement, stated Woodward.

On December 16, 2006, a homecoming celebration for the lens was held at the lighthouse, featuring a parade, free cake and ice cream, and fireworks. Councilwoman Janice Hahn presented a congratulatory plaque to the Point Fermin Lighthouse Society, and John Olguin explained the quest to recover the lens. After the program, the public was invited inside the lighthouse to view the lens.

On May 2, 2012, Point Fermin Lighthouse was made available under the National Historic Lighthouse Preservation Act of 2000 to eligible federal, state, and local agencies, non-profit corporations, educational agencies, and community development organizations to be used for educational, recreational, cultural, or historic preservation purposes. Interested entities were given sixty days to submit a letter of interest expressing their desire to submit an application for ownership. Included with the lighthouse were an adjacent guest quarters and a coastal lookout, but the Coast Guard would retain ownership of the lens. The Los Angeles Department of Recreation and Parks had managed the site for numerous years and seemed a likely candidate for ownership, though the availability notice explicitly stated that no preference would be given to government agencies.

For a larger map of Point Fermin Lighthouse, click the lighthouse in the above map.

From the southern terminus of Interstate 110, proceed south roughly three miles on Gaffey Street which ends at Point Fermin Park. The lighthouse is located in the park and is open for tours Tuesday through Sunday between 1:00 and 4:00 p.m. For more information, you can reach Point Fermin Lighthouse at (310) 241-0684.

The lighthouse is owned by the City of Los Angeles and managed by Los Angeles Department of Recreation and Parks. Grounds open, dwelling/tower open during tours.


Point Fermin Lighthouse appears in the movie "500 Days of Summer." It isn't exactly obvious, but just keep your eyes pealed during the wedding scene. And no, they haven't moved the lighthouse to Santa Barbara. It is still in San Pedro.