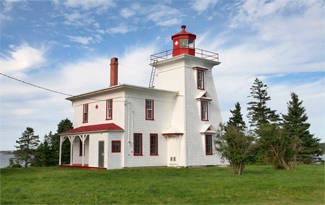 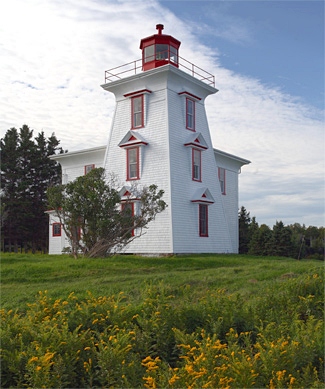 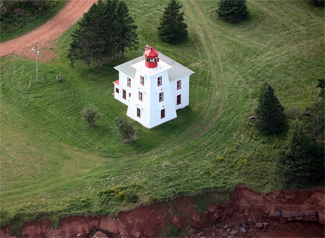 Blockhouse Point Lighthouse is located on the west side of the entrance to Charlottetown Harbour, overlooking Northumberland Strait on the south shore of Prince Edward Island. This historic area was the site of large Mi'kmaq gatherings each summer. In 1720, the French established a settlement called Port-la-Joye nearby, and in 1758 the British built Fort Amherst to assert control over the area.

In the Journal of the House of Assembly for Prince Edward Island of 1846, it is recorded that Thomas Owen was paid £10 for the expense occurred by him in constructing a Lanthorn at the Blockhouse, as a Harbour Light for Charlottetown, and keeping the same in operation. Given the amount spent on establishing the light, it was likely a makeshift affair.

In 1856, a more substantial structure was constructed as indicated by the following expenditures. John Smallwood was paid £46 for building and fitting up a place on the upper part of the Block-house for a light using 11,000 ft. hemlock boards, 24lbs. wrought nails, 3,000 ft. pine plank, and six lights of plate glass. James Millner was then paid £25 to supply zinc, sheet iron, copper and labour to make the lighthouse secure from fire. Finally, George W. Millner was paid £2 to paint the exterior and interior of the lantern.

A year after Prince Edward Island joined the Confederation of the Dominion of Canada in 1873, the General Superintendent of lighthouses toured the island and found its lighthouses and lighting apparatus were very inferior and required large amounts of repairs and improvements. The following observations were made for Blockhouse Point Lighthouse. The buildings at this station are so much decayed by age as scarcely to merit repair, and it was thought advisable to perform only slight temporary repairs, till arrangements could be made to erect a new light-house and dwelling. It is proposed to erect a tower of the height of 30 feet to show a fixed white light to all points of approach, and to show also a powerful red light in the direction of the outer buoy on Governor Island Reef.

After Parliament appropriated $4,000 for a new lighthouse on Blockhouse Point, the current structure was built in 1876 by James W. Butcher at a contract price of $2,750. The lighthouse was built of wood and consists of a square tower, 12.8 metres (42 feet) high, attached to a dwelling. The surrounding red sandstone cliffs contribute to give the light a focal plane of 18.3 metres (60 feet) above the water. Besides the main fixed white light in the lantern room, a red light was shown from a lower window to lead mariners to a bell buoy in Hillsboro Bay.

Blockhouse Point Lighthouse is a considerable structure, the tower being broad and short and the two-storey, flat-roofed dwelling being larger than most. The flared cornices on the tower and dwelling and the pedimented tower windows were installed between 1890 and 1914. The cornices were originally bracketed and the tower windows were similar to the windows presently on the dwelling.

The dwelling consists of a kitchen, a parlor and two bedrooms on the ground floor and four more bedrooms and a bathroom on the upper floor. The inside of the tower is lined with tongue-and-groove wallboarding. The beacon was originally a catoptric light, but in 1909 a more efficient fourth-order Fresnel lens was installed with a mercury vapour light source. The present seven-foot, octagonal lantern room was put in place the following year. The current signature of the light is a three-second flash, followed by a one-second eclipse.

Made unnecessary by the establishment of the Hazard Range Lights, the red light shown from a window in Blockhouse Point Lighthouse was discontinued with the opening of navigation in 1890.

Blockhouse Point Lighthouse has seen a few alterations over the years. A porch that ran down the dwelling's south elevation was removed along with a balustrade on the dwelling's roof and an attached shed.

Several keepers have served at Blockhouse Point Lighthouse. Archibald McLaine was appointed keeper in 1867; Alex S. McNeil was made keeper in 1901; Nelson Currie was appointed keeper on May 6th, 1912. William Stanley Taylor became keeper of the light on October 15th, 1936, a position he would hold until February 3rd, 1963. He then took on the role of caretaker of the lighthouse until January 1st, 1967. The lighthouse was automated on July 25th, 1962.

Merrill Taylor, son of Keeper Taylor, leased the lighthouse as a summer residence for several years until the Coast Guard discontinued the Blockhouse Point lease and one for the New London Rear Range Lighthouse in 2000.

Blockhouse Point Lighthouse has twice escaped planned replacement, first in 1963-64 and again in 1969-70.

Blockhouse Lighthouse Preservation Society, formed in 2011, submitted a petition for ownership of the lighthouse under the Parks Canada Heritage Lighthouse Program, but then in 2015, it learned that the Mi'kmaq Confederacy had filed a claim for the lighthouse, along several others and surrounding Crown lands across Prince Edward Island. In 2017, members of the society, concerned about the neglected lighthouse, contacted their MP and officials from Fisheries and Oceans in 2017. "From far away it looks like, 'Oh gee, it could just get some red and white paint on that and it would look great,' but now we're talking about structural damage," said Carol Carragher, a nearby resident and member of the society. "This is our history. When it's gone, you cannot bring it back  it's gone. And shame on those people who let it happen."

Spurred by the feedback from the public, the Canadian Coast Guard sent a team to inspect the lighthouse, and in November 2017, construction workers arrived at the lighthouse. Scaffoling and plastic wrap were placed around the structure, and when this covering was taken down in March 2018, a gleaming white lighthouse was revealed. Rotted wood and old shingles were replaced. New deck posts were installed, and the foundation was repaired. Carol Carragher was pleased with the work, noting "It's a great feeling to see a building that's so important to our community to be looked after with that type of care which is really all that we all wanted."

For a larger map of Blockhouse Point Lighthouse, click the lighthouse in the above map.

From Charlottetown, travel southwest on Highway 1, then take Highway 19 south passing through Meadowbank. Shortly after the bridge, follow Highway 19 east to Fort Amherst/Port La Joye National Historic Site. When you near the southeast tip of the peninsula, go east on Blockhouse Road from Highway 19 and continue to its end at Blockhouse Point Lighthouse.