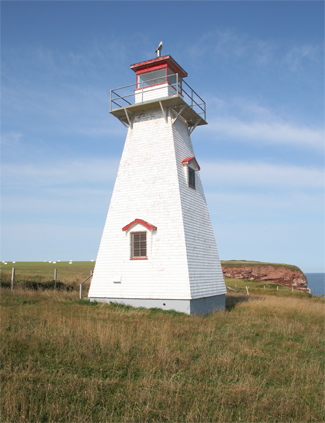 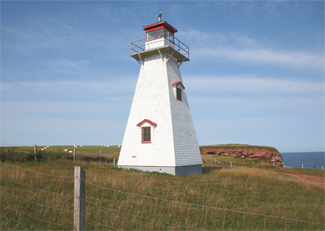 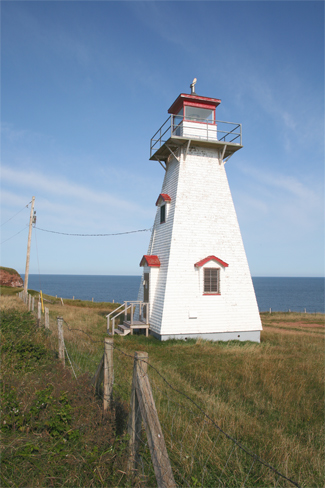 Cape Tryon, located 2.4 km (1.5 miles) northwest of New London Harbour, is a remarkable red sandstone cliff with a height of 33.5 metres (110 feet). From this lofty perch, the Cape Tryon Lighthouse guides mariners along the northern coast of Prince Edward Island between Richmond Bay and New London, warning of the shallow water that extends out a considerable distance from shore.

The first Cape Tryon Lighthouse was put into operation on the opening of navigation in 1905 and stood on ground 15.2 metres (50 feet) back from the edge of the cliff. B. D. Huntley of Vernon River Bridge was awarded a $1,590 contract to construct the lighthouse, which consisted of a rectangular, wooden dwelling, painted white, with an octagonal, red iron lantern mounted on the north end of its gambrel roof. The lighthouse stood 11.3 metres (37 feet) tall from its base to the ventilator on the lantern, and its first beacon was a temporary seventh-order white light, visible for sixteen miles from all points of approach.

In 1906 the temporary lens was replaced with a fourth-order Fresnel lens manufactured in Paris, France by Barbier, Benard & Turenne. The lens had four lenticular panels and completed one revolution in twenty seconds producing a 0.638-second flash every five seconds. The illuminant was petroleum vapor burned under a mantle. Captain William Bell from French River was the first keeper of the Cape Tryon Lighthouse, serving from 1905 until his passing in 1915.

The lantern deck was recanvassed and the flashing around the lantern base renewed in 1928. An unused chimney was also taken down at that time, the resulting hole boarded over, and leaks in the roof and plaster in the dwelling were repaired.

James Graham was hired as a temporary keeper in 1936 but resigned in early 1937 only to return as a permanent keeper later that year after William Brander was relieved of duty. Keeper Graham took a leave of absence in September, 1942 to join the armed forces and returned as keeper in 1948. Arthur Paynter kept the light from 1953 until it was automated in 1962.

The original Cape Tryon Lighthouse was replaced in 1962 by the present square, pyramidal tower, which stands 12.4 metres (40.7 feet) tall, has a focal plane of 33.4 metres (110 feet), and exhibits a two-second flash every six seconds.

After the original Cape Tryon Lighthouse was decommissioned, it was moved a short distance to Cape Road, where it sat empty and neglected for a few years. Around 1964, a family from Montreal, Quebec purchased the lighthouse and relocated it a few kilometres to the west to their property in Sea View.

Ron and Alberta Somers purchased the lighthouse in 1990 and moved it to its current location in Park Corner, where they lovingly restored the lighthouse to serve as a summer cottage. The Somers just happen to be related to two of the keepers who served at Cape Tryon. Ron's great-uncle is James Graham, and Alberta's great-great-grandfather is Captain William Bell, first keeper of the lighthouse.

Lucy Maud Montgomery, author of Anne of Green Gables and numerous other works set on Prince Edward Island, was living in Cavendish, on the eastern shore of New London Harbour, when Cape Tryon Lighthouse was established. In 1909, she recorded the following about Cape Tryon and its new lighthouse.

Away to the westward six or seven miles the view was bounded by New London Point [now called Cape Tryon], a long, sharp tongue of land running far out to sea. In my childhood I never wearied of speculating what was on the other side of that point  a very realm of enchantment surely, I thought. Even when I gradually grew into the understanding that beyond it was merely another reach of shore like our own it still held a mystery and fascination for me. I longed to stand out on the remote, lonely, purple point, beyond which was the land of lost sunsets. I have seen few more beautiful sights than a sea-sunset off that point. Of late years a new charm has been added to it  a revolving light which as seen from here, flashes on the point in the dusk of summer nights like a beacon Oer the foam/Of perilous seas in fairylands forlorn.

Montgomery's Annes House of Dreams, published in 1909, is set around Four Winds Harbour, in actuality New London Harbour, and features the Four Winds Lighthouse kept by Captain Jim. The following description of the setting of the lighthouse, given in Chapter 9 of the book, leaves little doubt that it was based on Cape Tryon Lighthouse: The Four Winds light was built on a spur of red sandstone cliff jutting out into the Gulf.

In May 2016, L.M. Montgomery Land Trust, whose purpose is to preserve the seashore familiar to L.M. Montgomery, became the new owners of the lighthouse.

For a larger map of Cape Tryon Lighthouse, click the lighthouse in the above map.

From Highway 6 in New London at the Lucy Maud Montgomery Birthplace, go north on Highway 20 for 6.9 km (4.3 miles) and then turn right on River Road (Route 263). Follow River Road until it ends, then turn left onto Cape Road. After 1.0 km (0.6 miles) there will be a dirt road (Cape Tryon Road) on your right. Cape Tyron Lighthouse is located at the end of this private dirt road. Note that in 2013, the dirt road was blocked and posted with a No Trespassing sign. The farmer who owns the land over which the road passes has decided to block the road until the Department of Fisheries and Oceans improves it so people don't drive in his fields. It is okay to walk roughly 1 km on the road to reach the lighthouse.


Cape Tryon Lighthouse is believed to be the Four Winds Lighthouse that Lucy Maude Montgomery used in Annes House of Dreams. The following description of the lighthouse is given in chapter 9 of the book: The Four Winds light was built on a spur of red sandstone cliff jutting out into the Gulf.