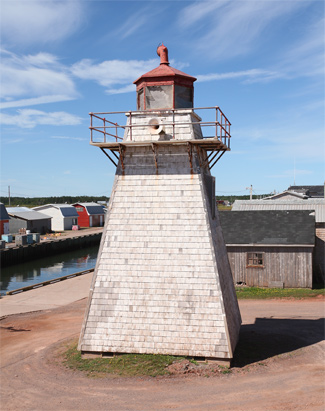 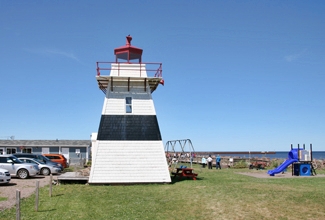 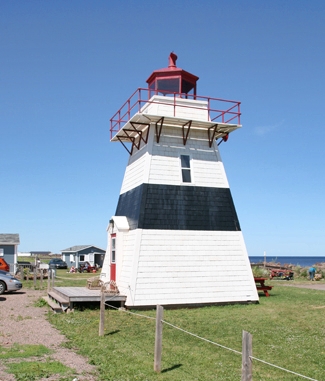 Tignish Harbour is formed by the mouth of the Big Tignish River, where it enters the Gulf of St. Lawrence on the northwest shore of Prince Edward Island. In 1868, the Government of Prince Edward Island commenced construction of piers on each side of the mouth of the river to contract the outflow to a width of 12.2 metres (40 feet). This restriction provided enough current at ebb tide to keep the mouth of the river open. Prior to this project, gales from the east would stir up sand from the surrounding beaches that would obstruct the entrance to the river.

In 1877, two fixed beacons hoisted atop masts were established to guide vessels into the harbour. The front light was placed at the outer end of the breakwater and the back light stood about 320 metres (350 years) shoreward from the front light. The lights were erected by Theodore Bernard at a cost of $130, and Isidore Chasson was appointed the first keeper of the lights at an annual salary of $100. The lights were called a great boon to the fishermen of that place, but after just a year of operation, the beacons were destroyed by a gale on October 29, 1879.

Temporary range lights were exhibited the following season while a formal lighthouse was being constructed by Henry Williams for a contract price of $545. The new tower, situated on the beach at the inner end of the north breakwater pier, first exhibited its light at the opening of navigation in 1881. The Big Tignish Lighthouse, which remains standing today though relocated, was 10 meters (33 feet) tall and displayed a fixed white catoptric light from a focal plane of 10.7 metres (35 feet). The iron lantern and lighting apparatus cost $493.76, bringing the total cost for the lighthouse to $1,102.

The gallery surrounding the lantern room is mounted on iron brackets, which is not uncommon. The shingled lighthouse has no attached dwellings and only minor changes have been made to the tower over the many years it was in operation. Originally, it had one broad black band around the middle, but this was later painted over.

On September 15, 1883, a second light was established atop a pole at the outer end of the north pier to mark the location of the pierhead and, when aligned with the inner light, to guide vessels between the breakwaters. The light was fixed red, exhibited from a height of 4.3 metres (14 feet), and was located at a distance of 189 metres (620 feet) from the main light.

In 1888, a new mast and shed had to be erected to replace the former front light that was carried away by a gale the previous fall. In 1895, Captain J. Gallant replaced the rotten wooden foundation under the main tower with a stone foundation at a cost of $125.

Big Tignish Lighthouse was operated by oil until the tower was electrified in 1962. At this point, Alphonse Gaude, the last keeper who as being paid an annual salary of $590, was replaced by John Pitre, a caretaker who earned just $100. The tower continued to serve as a rear range light until 1989, when it was converted to a coastal light. The light was decommissioned in 1997, and in 2008 the tower was relocated from the harbour entrance to Fishermans Haven Park at nearby Tignish Shore.

For a larger map of Big Tignish Lighthouse, click the lighthouse in the above map.