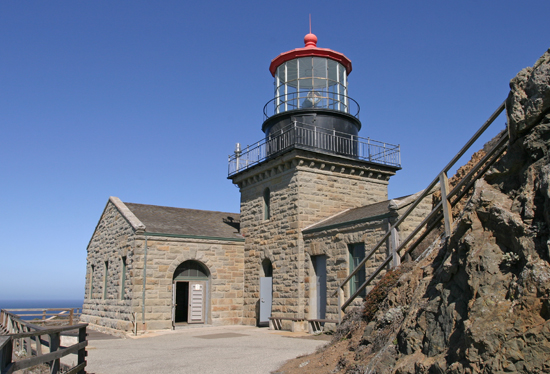 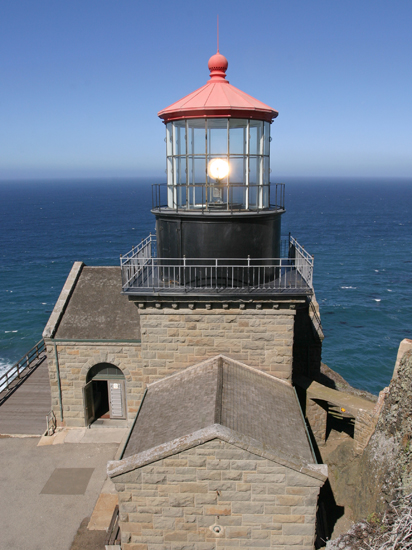 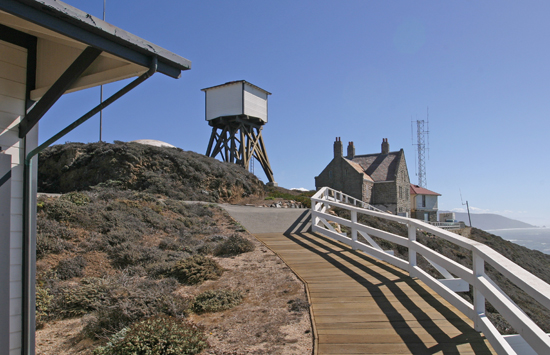 Two tall coastal towers, Piedras Blancas Lighthouse and Pigeon Point Lighthouse, were constructed in the early 1870s to help light the California coast. However, between these two, distant towers, no major light existed, leaving a good portion of the shore dark to mariners. The 1874 Annual Report of the Lighthouse Board read in part: Vessels leaving San Francisco for the south, having proceeded as far as Pigeon Point Light, take their departure for Point Sur, some sixty miles distant, the great indentation of Monterey Bay intervening. Vessels to the southward bound to San Francisco having arrived at Piedras Blancas, take their departure for Point Sur again about sixty miles distant; hence Point Sur is a most important point and should be the site of a lighthouse. In considering the various points on the California coast where lighthouses are still required Point Sur claims the place of greatest importance. Further punctuating the need for a lighthouse at Point Sur, the steamship Ventura ran aground on rocks just north of the point during a dense fog on April 20, 1875. All 225 passengers were safely taken to shore, but the ship and its cargo were a total loss. After a decade of requests, Congress finally allocated $50,000 in both 1886 and 1887 for a first-order light and duplicate steam fog signal at Point Sur.

Point Sur is a large, 361-foot-tall rock, which seems as if it has been broken off from the nearby mountains and pushed oceanward, leaving a low lying area of land in between. The low land connecting the rock to the mainland is known technically as a tombolo, and in the past, water has swept completely around the rock, cutting it off from the mainland. Early navigators took note of the prominent rock, with Juan Cabrillo calling it a moro rock in 1542, and Sebastian Viscaino labeling it a point which appears as an island on his 1603 map.

Construction materials were landed through a heavy surf near the point in late May 1887, and twenty-five men set to work making a corduroy road across the sand dunes to the mainland and building a railroad trestle and stairway up the giant rocks landward side. Before construction of the buildings could begin, various parts of the rocks ten-to-twelve-foot-wide summit had to be blasted to provide level areas large enough to accommodate the light station buildings. The needed logs and blocks of sandstone were cut and quarried from the surrounding hills, and the stations buildings built with these materials are scattered over the rock at varying heights. The lighthouse was placed in a notch on the northwestern extreme of the rock, several feet below the summit, so its light could be seen below the typical fog level. The northern wing of the sandstone lighthouse housed the boilers for powering the twelve-inch steam whistle, and the southern wing served as a watchroom and storage room for fuel.

A three-story, sandstone triplex was built near the southern end of the rock and was designed to house three keepers and their families. As four keepers were assigned to the station, a building used to house the assistant engineer during construction of the station was left standing to accommodate the fourth keeper. A picket fence was placed around the dwelling area to prevent the keepers children from falling off the rock. Next to the triplex, a one-story sandstone structure housed the steam engine for powering the tramways winch. A 53,000-gallon cistern was also built atop the rock to store water pumped from a well located in the flats near the base of the rock.

When funds ran out on November 1, 1888, work on the station came to a halt, and a watchman was put in charge of the site. Congress provided an additional $10,000 on April 16, 1889, and twenty-six workers were sent back to the rock with material to finish the station. After all the buildings atop the rock were complete, all but one of the temporary wooden dwellings were torn down, and the resulting material was used to construct a barn on the sand flat at the foot of the rock.

After two years of construction, the station was finally ready to fulfill its purpose. A first-order Fresnel lens, manufactured in 1887 by Barbier & Fenestre of Paris, was shipped around Cape Horn on a square-rigged sailing vessel, and the 4,330-pounds of glass and brass were then assembled in the lantern room, where a kerosene lantern illuminated it for the first time on August 1, 1889. The signature of the light was alternating red and white flashes, spaced fifteen seconds apart and cast out to sea at a focal plane of 272 feet above the ocean. A 450-pound weight was suspended beneath the lens, and after being cranked up by the keeper, it would rotate the lens for four hours. Besides minding the light, the keepers were also kept busy feeding the steam-powered whistle that issued a five-second blast every thirty-five seconds.

As Highway 1 was not completed until 1937, the keepers and their families lived an isolated life. Soil had been hauled to the top of the rock to permit the families to cultivate a small vegetable garden, but other food staples and most of the supplies for the station arrived aboard a lighthouse tender, which called at the rock about every four months. A second tramway was constructed on the southern side of the rock, where it led from the summit to a wharf perched above the water. Supplies were placed in cargo nets and then hoisted from the small skiffs to the wharf where they could be placed on the railcars and winched to the dwelling area. A combination carpenter/blacksmith shop was also built atop the rock to help the keepers be even more self-sufficient. A live-in teacher schooled the keepers children, until a one-room schoolhouse was built near Highway 1.

In 1900, the road that snakes around the seaward side of the rock was carved out for transporting supplies to the summit, and a barn was built atop the rock to replace the one on the sandspit. After Congress ignored multiple funding requests to build an additional keepers cottage, the building that housed the tramway hoist engine, which was no longer needed, received a second story in 1902 and was converted into a dwelling for the head keeper.

During the 1930s, Keeper Thomas Henderson kept a cow in the barn and sold its milk to the other keepers. It seems Assistant Keeper Bill Owens did not get along too well with Henderson. After a quarrel between the two, Henderson refused to sell any milk to Owens, so Owens arranged for three quarts of milk to be delivered to the stations gate on Highway 1 each day. When Henderson lifted his restriction, Owens declined the offer and continued to receive the daily deliveries. Not surprisingly, Owens soon requested and received a transfer to Point Arena Lighthouse.

Though various shipwrecks occurred near this stretch of coast, perhaps the most famous wreck was that of the USS Macon, a rigid airship which went down in a squall on February 12, 1935, not far from the lighthouse. The helium-filled dirigible was 785 feet in length and housed four biplanes used for reconnaissance. Keeper Henderson witnessed the event and at a Naval Board of Inquiry gave the following testimony: When it was just abreast of the Point the fin seemed to go to pieces very suddenly. The fabric drifted back, some of it caught on the rudder. I know that there was a portion of the frame remaining but I cannot say whether any of the frame carried away. The failure seemed to start at the forward end of the fin. The front part [of the Macon] rose up, then crumbled up swiftly. I could see a hole at the top of the hull. The Naval ships, which the airship was accompanying, were able to rescue all but two of the Macons eighty-three-man crew.

A radiobeacon was placed in operation atop Point Sur on December 1, 1925, as an additional aid to help mariners determine their position.

Point Sur Light Station was automated in 1972, and following the departure of the final Coast Guard crew that year, the support buildings were boarded up. Fearing vandalism, the Coast Guard removed the first-order Fresnel lens from the lantern room in 1978. In 1992, the lens, which had been replaced by a revolving beacon, was loaned to the Maritime Museum of Monterey, where it was on exhibit until the museum closed. In November 2017, the lens was removed from the museum and placed in storage. Point Sur Lighthouse needs be seismically upgraded before the valuable lens is placed back in the lantern room.

Point Sur Light Station was placed on the National Register of Historic Places in 1980, and four years later, the State of California acquired all but the lighthouse with the intention of preserving the structures as an example of a late-nineteenth-century light station. The California Department of Parks and Recreation along with the Central Coast Lighthouse Keepers have done a great job restoring the facilities. Most of the structures built on the rock still stand, making it one of the most complete light stations in California. Restoration of the blacksmith/carpenter shop was completed in 1999, renovation of the barn was finished in 2000, and a water tower, which doubles as a cellular tower, was reconstructed in 2000 with funding provided by a cellular company. International Chimney Corporation wrapped up a $309,000 restoration of the lighthouses lantern room in January 2001. Before this restoration, the base of the lantern room was white, but it has now been returned to its historic black coloring.

During World War II, roughly forty men were stationed at the rock to help protect the surrounding coast. Two rectangular buildings, a mess hall and a bunkhouse, were built south of the head keepers dwelling to accommodate the additional personnel. The stations visitors center is now housed in the mess hall and has an exhibit on the USS Macon that features artifacts recovered from the airship by a joint Naval and Monterey Bay Aquarium Research Institute expedition in 1990.

On April 23, 2004, Point Sur Lighthouse was officially transferred from the Coast Guard to California State Parks, under the National Historic Lighthouse Preservation Act of 2000.

Renovation of the head keepers residence began in 2009 and concluded in 2012, when a grand opening of the structure was held on August 5. The second story of the dwelling was returned to its original half-timbered exterior, and the interior was remodeled to reflect station life during the 1950s. Restoration of the interior of the triplex is the last major project remaining.

For a larger map of Point Sur Lighthouse, click the lighthouse in the above map.

Docent-led three-hour tours of Point Sur State Historic Park are offered on Saturday, Sunday, and Wednesday throughout the year. For a list of specific tour times and more information on the ongoing restoration work, see the Point Sur Light Station website. You can also contact the lighthouse at (831) 625-4419.

The meeting place for tours is along the west side of Highway 1, roughly 23 miles south of Monterey. Tours are first-come, first-served. The lighthouse is located on the far side of the large rock formation west of the highway. Visitors get the chance to climb the lighthouse and tour one of the keeper's dwellings. A distant view of the station is possible from Highway 1.

The lighthouse is owned by California State Parks and is part of Point Sur State Historic Park. Grounds/dwelling/tower open during tours.


Gerald Salyer contributed this photograph of his receiving a re-enlistment oath at Point Sur Lighthouse on November 12, 1976. At the time, he was living at the Naval facility at Big Sur. The photograph shows that the lens was still in the lantern room but its function had been replaced by a modern aero beacon mounted on the roof of the fog signal building.


Tour and lighthouse are both wonderful and a "must see." It would be spectacular with the original lens back in place. A visit to see the lens in Monterey is worth the drive up the coast from the light. The lens is amazing!