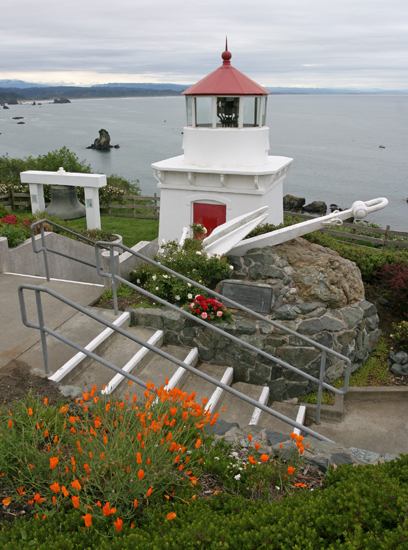 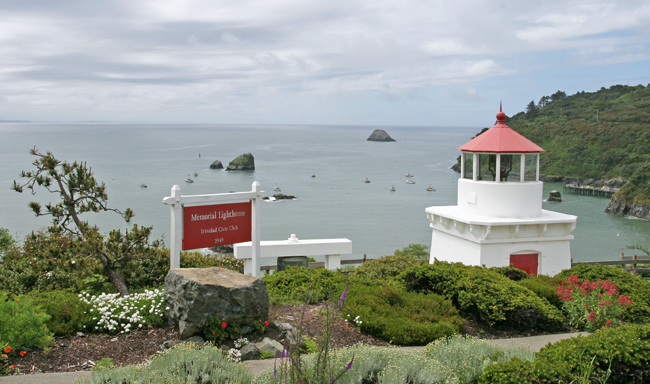 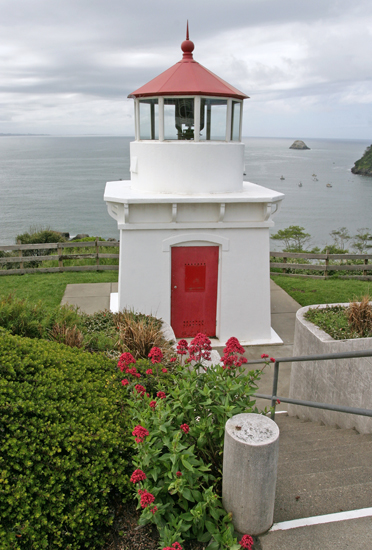 After modern counterparts replaced the original fog bell and Fresnel lens at Trinidad Head Lighthouse in 1947, the Coast Guard donated the historic artifacts to the Trinidad Civic Club for display in a planned memorial park overlooking Trinidad Bay. Earl and Neva Hallmark donated a forty-five-by-fifty-foot parcel of land for the park in 1948, and in 1949 the club built a concrete Trinidad Memorial Lighthouse, an accurate replica that many visitors believe to be the actual Trinidad Head Lighthouse. The historic Fresnel lens was installed in the lighthouse's lantern room, and the fog bell was suspended from a wooden frame built adjacent to the lighthouse. The replica lighthouse was dedicated on June 26, 1949. For its work on the memorial, the Trinidad Civic Club received the 1949 California Grand Sweepstakes Prize in the Build a Better Community Contest sponsored by the National Federation of Women's Clubs and the Kroeger Company.

In the early 1970s, the Trinidad Civic Club decided to establish a memorial at the lighthouse for those lost at sea. The memorial started as a marble slab engraved with sea gulls and the words "Lost At Sea," but has steadily grown through the years. In 1975, the club created a four-sided, pyramidal, rock-cement monument, located near the fog bell, that supports plaques inscribed with names of those lost at sea. Inscriptions were later added for those who were buried at sea, and the list of names soon outgrew the plaques on the small monument, so additional plaques were placed along the adjacent cement retaining wall.

Each year on the last Sunday in May, friends and families gather to remember those whose names are recorded on the plaques. Originally, the fog bell was only rung at the Memorial Day gatherings, but through the generosity of Dave Zebo, a long-time resident and a former mayor of Trinidad, the bell has been automated to toll each day at noon in memory of those buried and lost at sea. Click here to hear the bell toll a couple of times (the flag at the memorial was at half-staff due to the then recent passing of President Ford).

In August 1998, new windows and a new stainless steel dome were installed atop the tower thanks to the efforts of community volunteers and Tom Odom, a former mayor of Trinidad.

Following a season of heavy rains, the ground surrounding Trinidad Memorial Lighthouse started to slip in March 2017. SHN Consulting Engineers & Geologists of Eureka investigated the unstable slope beneath the lighthouse and submitted a report based on drill borings and readings from slope inclinometers to the city. The report read, in part: In light of the observed ground displacements over the previous two wet seasons, we are of the opinion that failure to stabilize at least a portion of the head of the landslide complex or move the lighthouse prior to the onset of the coming winter could result in the structure and foundation being comprised.

The Trinidad Civic Club felt they had to act before the next rainy season and eventually decided to relocate the lighthouse twenty-two feet to the east on property it owned. This decision, however, sparked protests from supporters of the Tsurai Ancestral Society, who felt the lighthouse endangered Tsurai village, an Indian burial ground. Protestors occupied the lighthouse and demanded the lighthouse be moved elsewhere.

An agreement was worked out between the Civic Club and the Cher-ae Heights Indian Community of the Trinidad Rancheria and the Yurok Tribe to temporarily move the lighthouse to the harbor area, owned by Trinidad Rancheria, until the parties could agree upon a permanent location for the monument. On January 20, 2018, the lighthouse and fog bell were relocated to the harbor area.

For a larger map of Trinidad Head Memorial Lighthouse, click the lighthouse in the above map.

The lighthouse is owned by the Town of Trinidad. Grounds open, tower closed.


I have not stayed there, but I noticed that right across the street from the Trinidad Head Memorial Lighthouse is the Trinidad Bay Bed and Breakfast. You couldn't ask for a better view from your bedroom window.