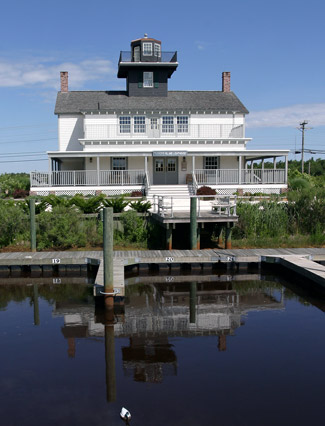 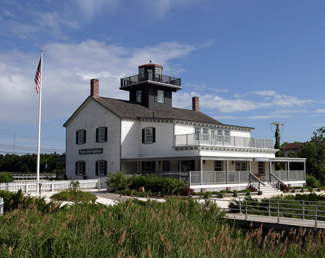 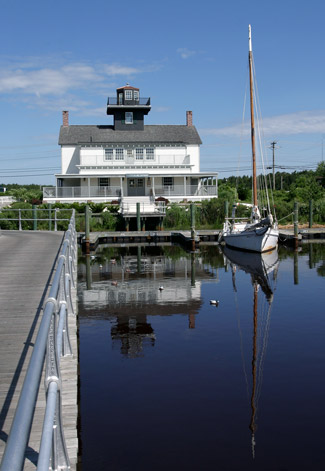 Reuben Tucker purchased the southern portion of Long Beach Island in 1765, around the time when people from Philadelphia and Burlington County first started regular visits to the Jersey Shore, bringing their own supplies and typically setting up tents on the beach. Reuben Tucker realized he could make some extra money by offering more comfortable accommodations, and his farmhouse soon doubled as an inn. Following Reubens death, his widow, Mammy Tucker, continued the inn-keeping tradition, and it wasnt long before a small community called Tuckers Beach was established. Mammy Tuckers Inn was later replaced by the larger Columbia Hotel, and with the addition of the four-story St. Albans Hotel, Tuckers Beach had become an ocean resort. Sometime around 1800, the ocean cut an inlet between Holgate and Tuckers Beach, and Tuckers Beach was now also Tuckers Island. A lighthouse was added to the island in 1848 to guide traffic into Little Egg Harbor, located west of the barrier island. A brick tower, known both as Little Egg Harbor Lighthouse and Tuckers Beach Lighthouse, displayed a fixed red light using an array of fifteen lamps set in fifteen-inch reflectors, and a one-and-a-half-story dwelling was built nearby for the keeper.

The following report on the station was filed in 1850:

These buildings although nearly new, are miserable indeed, both in materials and workmanship; the mortar is nearly all sand, or, if properly proportioned, it is poor stuff, for I could take a stick and dig the mortar out of the joints. The buildings are very leaky. It rained yesterday and the day before, and the water is still running and dripping through the inner wall. It ought to be repaired soon, by digging out mortar and filling the joints with cement. Found the lighting apparatus in good order, and clear.

To make matters worse, the poorly constructed lighthouse was also developing a poor reputation with mariners, as exemplified by this 1852 report by Captain H. K. Davenport, skipper of the U.S. Mail Steamer Cherokee: As for Egg Harbor Light, that had better be put out than kept as it is now, a decoy to draw vessels into difficulty looking for it. It is not as bright as the light I carry at my masthead.

In 1855, the lighthouse was fitted with a fourth-order Fresnel lens fabricated by Henry Lepaute of Paris that displayed a fixed light varied by alternating red and white flashes, but the Annual Report of the Lighthouse Board for that same year indicated potential changes at the station. When the first class light is lit at Absecum, the Tuckers Beach light will be unnecessary and inconvenient for purposes of general navigation. Indeed it will be of small local importance, as vessels cannot safely enter Little Egg Harbor at night. It will be quite sufficient to reduce it to a small harbor light, perhaps distinguished by a red or green color. Absecon Lighthouse commenced operation in 1857, and Tuckers Beach Lighthouse was discontinued in August 1859.

Rethinking its drastic move, the Lighthouse Board decided to reestablish Tuckers Beach Lighthouse, and after Congress provided funds on July 28, 1866, the following work was performed at the station:

Congress having made an appropriation of five thousand dollars for repairing and relighting this station, a party of workmen, with building materials, were on the 15th of April sent there. New floors were placed in the dwelling, and the building thoroughly repaired, a new brick water cistern built, new spouts and conductors, and a new pump supplied to the cistern. A new fourth-order lantern was placed upon the tower, the walls repointed inside and out, new window frames and sash, and a new granite sill to the door were provided. Both dwelling and tower received two coats of cement wash on the outside. A sand fence was constructed along the sea front of the light-house lot and the buildings enclosed by a cedar post and rail fence. A fourth-order lens, fixed varied by flashes, was placed in the lantern, and the light re-exhibited on the evening of June 20, 1867.

In September 1871, the color of the dwelling and tower were changed from gray to red to provide a better daymark for mariners passing the station. In 1874, the Lighthouse Board requested funds for enlarging the keepers dwelling or building a new one as the stations two keepers were forced to share the thirty-five by twenty-foot dwellings two ground-floor rooms and attic. What made this situation tolerable was that since the light was re-established Eber Rider had been serving as head keeper with one of his sons as assistant. Eber would serve as keeper through 1903, being assisted during this time by a daughter and three sons, one of whom, Arthur, replaced him as head keeper on January 1, 1904. Eber and his wife Mary Ann had twenty-one children.

The original lighthouse was converted into an oil shed in 1879, and a square tower supporting a lantern room was fitted to the roof of the enlarged keepers dwelling. That same year, the characteristic of the light was changed from fixed white varied by flashes to fixed white for one minute followed by six red flashes during the next minute.

The inlet north of Tuckers Island was fickle. At times Tuckers Island was attached to the larger Long Beach Island, while at other times it stood alone. During a blizzard in 1920, the inlet broke through and started to move south. Foot by foot, Tuckers Island was being erased, and one by one, hotels and houses were washed away. On September 10, 1927, Keeper Arthur Rider noted the following in the stations logbook: New light of increased power at Little Egg Inlet put in operation. Light at Tuckers Beach discontinued.

Displayed from a red skeletal tower, the new light was located 110 yards inland from the old lighthouse. On October 12, 1927, Tuckers Beach Lighthouse toppled into the water. Paul Rider, nephew of Keeper Arthur Rider, was at the lighthouse when it fell and captured the lighthouses final moments in this sequence of photographs. Of that final visit, he stated: I slept in the old lighthouse, camera in hand, the night before she toppled. The government had officially abandoned her some weeks before and we knew she could go any minute. Earlier storms had broken and undermined the foundation and the sands around it were constantly being washed away. The remains of the lighthouse were burned on October 14.

Six years after the lighthouse was lost, the nearby Coast Guard station was claimed by the sea. The schoolhouse followed in 1938, and by 1940 shorebirds were the only residents of the small patch of remaining land. The entire island had disappeared by 1952.

In the 1980s, a group of southern Ocean County sportsmen expressed concern that the old ways of bay life were in danger of extinction. This groups vision led to the eventual creation of Tuckerton Seaport, where the areas rich maritime heritage is captured through displays and demonstrations of boat building, decoy carving, and basket weaving. One of the many buildings at the seaport is a re-creation of Tuckers Island Lighthouse. Located some six miles west of its original location, the lighthouse should be quite safe from the sea. The replica lighthouse looks quite authentic and even houses a Fresnel lens, though not in the lantern room. To celebrate the New Year, visitors were granted free admission to Tuckerton Seaport on December 31, 2013, and an LED light was activated that evening atop the lighthouse.

For a larger map of Tucker's Beach (Replica) Lighthouse, click the lighthouse in the above map.

From the Garden State Parkway take Exit 58 and follow Route 539 south to the traffic light at Route 9 (Main Street). Make a right onto Route 9, and Tuckerton Seaport will be on your left across from Lake Pohatong.