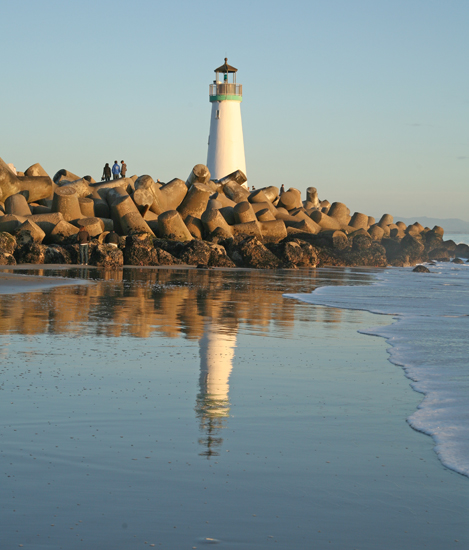 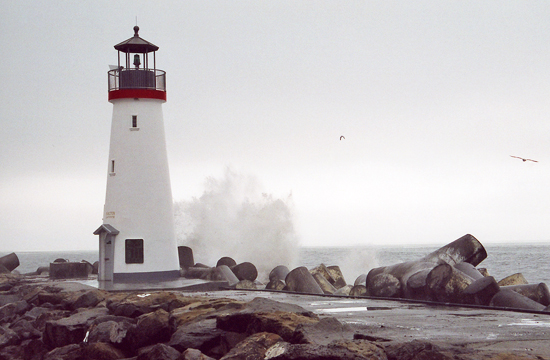 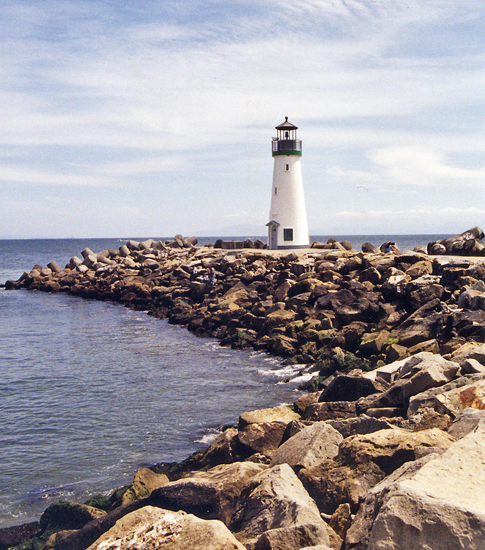 Located at the northern end of Monterey Bay, Santa Cruz Harbor is a haven for fishing craft and vessels. A harbor light, located at the west jetty, has marked its entrance for forty years. The original light was a box light structure which served from 1964  1996. It was replaced by a cylinder nicknamed the water heater which was used from 1996  1999. From 1999 until May 2002, a simple pipe structure held the light which marked the way into the harbor.

In 1998, the Santa Cruz community, under the leadership of Bill Simpkins and Jim Thoits, proposed replacing the unsightly harbor light with a lighthouse of classic design, adding a little more character to a community renowned for its characters. Fundraising efforts began in earnest, and with the contributions of many people, including a major donation from Charles Walton of Los Gatos, enough money was raised to begin construction of the new lighthouse in 2001.

The lighthouse, designed by Mark Mesiti-Miller and constructed by Devcon Construction, Inc., stands 41 ½ feet tall above the level of the west jetty, and 59 ½ feet above the mean low water mark. It weighs 350,000 pounds and is built to withstand a quarter million pounds of wave energy.

The construction began with a cylindrical inner core which houses electrical equipment and a circular staircase of forty-two steps which lead to the top of the lighthouse. Surrounding the inner core is a network of reinforcement rods, onto which shotcrete was blown and then hand-troweled to form the conical shape. These shotcrete walls are 4 ½ feet thick at the base. Finally, a durable weatherproof white finish was applied to the exterior of the lighthouse and a copper roofed lantern room topped it all off.

On June 9, 2002, the new harbor lighthouse was dedicated, and the signal, a green light flashing every four seconds at a focal plane of thirty-six feet, was activated. It is named the Walton Lighthouse, in honor of Mr. Charles Waltons late brother, Derek, who served in the merchant marines and was lost at sea during World War II.

As shown in the top two pictures at the left, which were taken in November 2002, the lighthouse originally had a red band day mark. In March 2003, the day mark was changed to a green band, after boaters protested that a green beacon should not have a red day mark. The green band can be seen in the bottom photograph.

For a larger map of Santa Cruz Breakwater (Walton) Lighthouse, click the lighthouse in the above map.

From Highway 1, near the junction with Highway 17 in Santa Cruz, exit south onto Ocean Street. Continue for 0.5 miles and then turn left onto Water Street. After 0.6 miles turn right onto Seabright Avenue. Proceed south for 1.2 miles and then turn left on Atlantic Avenue and follow it to its end. There, you will find a sidewalk, which leads to the breakwater and the lighthouse.