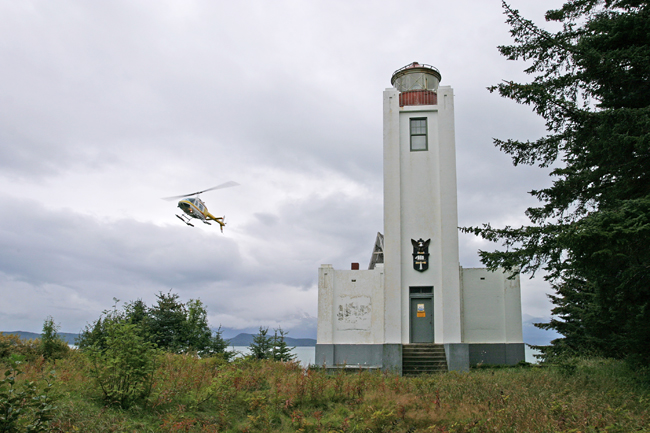 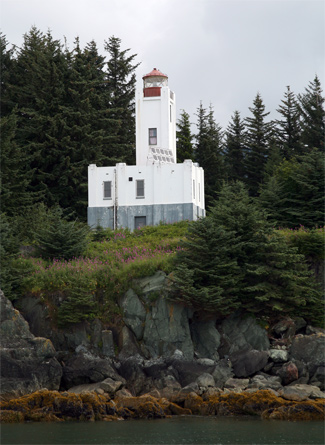 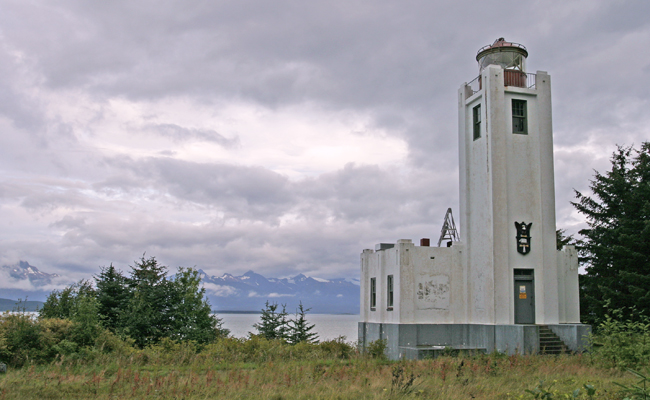 Cries of Gold! Gold in the Klondike! sparked one of the greatest gold rushes in history. In 1896, when George Carmack and his two brothers-in-law discovered the precious metal where Bonanza Creek flowed into the Klondike River in Canadas Yukon Territory, the area was almost uninhabited. Soon, however, an army of fortune seekers surged northward from Seattle and other Pacific port cities to try their luck in the gold fields.

The route taken by most of the stampeders led them to Skagway, situated at the northern terminus of Lynn Canal and the Inside Passage. From Skagway, the goldseekers still faced an arduous 600-mile trek before they could start panning in the frigid Klondike waters. In observation of the centennial of the Gold Rush, Alaska issued colorful license plates depicting the determined gold seekers threading their way up to Chilkoot Pass en route to the Klondike.

Before the influx of people produced by the gold rush, Alaskas waterways were marked by an occasional buoy, but the United States had yet to build a lighthouse along the vast coastline it had acquired in 1867. Strong currents, fog, rain, and a rocky shoreline made navigating the Inside Passage most challenging, and in 1898 alone, over three hundred maritime accidents were reported along the twisting waterway. Something had to be done to improve navigation, and the Lighthouse Board requested a hefty sum of $500,000 in 1900 for constructing several lighthouses in Alaska. Congress, however, only budgeted a paltry $100,000, which was dedicated towards lights at Five Finger Islands and Sentinel Island. The following year, an additional $200,000 was granted, and the task of lighting Alaskas coast was gaining momentum.

The inspector and engineer of the Thirteenth Lighthouse District sailed for Alaska on June 23, 1900 to select lighthouses, and after their return in August, they submitted a joint report recommending eleven lighthouses in Southeast Alaska and four in Western Alaska. All eleven of the lights recommended for Southeast Alaska would be built over the next five years, but those at Five Finger Islands and Sentinel Island were considered the most important.

George James, a Juneau resident, was awarded a $21,267 contract for the construction of Sentinel Island Lighthouse, and work on the project commenced on July 25, 1901, when men and materials were landed on the island. To reach the six-and-a-half-acre island from Juneau, one had to sail along Gastineau Channel to Auke Bay, and then follow Favorite Channel to its northern end where it joined Lynn Canal, a total distance of twenty-three miles.

The original Sentinel Island Lighthouse was the only one of its kind built in Alaska. The lighthouse consisted of a square wooden tower attached to the center of the westerly front of a keepers duplex, which was a large, two-story building with hipped cross gables. Atop the tower stood a helical-bar lantern room that housed a fixed, fourth-order Fresnel lens, manufactured in Paris by Henry-LePaute. The focal plane of the lens was forty-two feet above the island, and eighty-two feet about the surrounding water at high tide.

In addition to the lighthouse, the following outbuildings and structures were built at the station:

Sentinel Island Lighthouse was activated on March 1, 1902, though substantial work was still needed to complete the station. Sentinel Island could not stake sole claim as Alaskas first lighthouse as Five Finger Islands Lighthouse, located at the entrance to Stephens Passage some eighty-plus miles south of Juneau, went into service the same day.

Navigating Lynn Canal was still treacherous even with a light on Sentinel Island. Early in the morning of August 5, 1910, the Princess May was southbound from Skagway carrying eighty passengers and a crew of sixty-eight when she ran aground on a reef just off the northern end of Sentinel Island. The passengers were safely off-loaded on the island where the keepers did all they could to make them comfortable. Efforts to float the vessel off the island at high tide failed, so sliding ways had to be built and rock blasted away before the Princess May was finally pulled free on September third. After a week of repairs in Juneau, she continued her journey south.

Louis Betteker, whose career with the Lighthouse Service would span three decades, was head keeper on Sentinel Island when the Princess May grounded, and though this incident happened near the beginning of his service, it remained the most vivid in his memory. Betteker had served as an assistant keeper at Five Finger Islands before being promoted to head keeper at Sentinel Island, and he would go on to serve at three lighthouses in Washington before retiring from West Point Lighthouse in 1938.

Unfortunately, all shipwrecks near Sentinel Island did not occur without loss of life. On October 24, 1918, the S.S. Princess Sophia was also traveling south from Skagway when she slammed into Vanderbilt Reef in bad weather. Passengers were thrown from their berths and dishes fell shattered to the galley floor. The captain radioed approaching rescue vessels that there was no immediate danger and that the ship would likely float free at high tide. Later that day, however, it was evident that the ship was stuck fast on the reef. The lighthouse tender Cedar along with the steamer King and Winge were standing by, but the reef made approaching the stranded vessel difficult in the approaching darkness.

The rescue vessels sought safe harbor for the night by following the light from Sentinel Island, located just over four miles southeast of the reef. By morning, the winds had increased to gale force preventing the transfer of passengers. The rescuers waited for the storm to abate, and by late afternoon, blowing snow and waning light hid the Princess Sophia from view. Then, at 4:50 p.m., the Cedar received the following distress message: Taking water and foundering. For Gods sake come and save us. Thirty minutes later, the ships final radio transmission was heard: Just time to say goodbye. We are foundering. A total of 343 people perished in the accident. The only living creature to survive was an English Setter that showed up at Auke Bay two days later coated with fuel and oil.

An incandescent-oil-vapor lamp was being used as the light source inside the towers Fresnel lens in 1913, but by 1921, an acetylene light had been installed, changing the lights characteristic from fixed white to a group of two flashes every six seconds. The acetylene light was described as not entirely reliable, but it appears to have remained in operation until 1929, when the light was electrified.

During the 1930s, many of the original wooden lighthouses built in Alaska were replaced with stout concrete towers built in an Art Deco style. Such a structure was constructed on Sentinel Island between 1933 and 1935. When the new lighthouse neared completion, a wooden trestle was built between it and the old lighthouse, enabling the lantern room to be slid into place atop the new tower. The replacement lighthouse consisted of an eleven-foot-square tower that rose to a height of just over fifty feet from the eastern face of a two-story fog signal building, measuring twenty-eight by thirty-four feet. Pilasters, placed at the corners of the tower and fog building, project a few feet about the roofline and give the otherwise plain lighthouse a distinct flair. Another ornamentation found on the tower was a crest exhibiting an eagle, a sailing ship, and a lighthouse.

No longer needed, the top of the tower was removed from the original duplex, but the dwelling continued to provide shelter for the keepers until the station was automated in 1966. At that time, the fog signal was discontinued, while generators provided power for the light. To reduce maintenance costs, the Coast Guard burned the distinctive dwelling to the ground in 1971 and added solar power to the lighthouse in 1987. The foundation of the original duplex/lighthouse is still clearly visible in the grassy area south of the modern lighthouse, while the foundation of the original fog signal building is just to the west.

On April 26, 2004, Interior Secretary Gale Norton announced that the Gastineau Channel Historical Society was the recipient of Sentinel Island Lighthouse, the first Alaskan lighthouse to be transferred under the National Historic Lighthouse Preservation Act of 2000. The society had been leasing the lighthouse from the Coast Guard for the previous six years and had demonstrated a commitment to preserving the historic buildings on Sentinel Island.

Present at the announcement ceremony was Governor Frank Murkowski, who has an interesting connection to Sentinel Island Lighthouse. In the early 1960s, Murkowski was stationed aboard the tenders Sorrel and Thistle, which regularly serviced the lighthouses of Southeast Alaska. Murlowksi recalled that the Sentinel Island light was a particularly difficult one to service, because it has no good landing area and is exposed to the wind, sea, and swells of Lynn Canal. If the weather was not amenable, we didnt go in. Later, when Murkowski was serving as a U.S. Senator, he introduced the legislation that now permits the transfer of lighthouses to deserving organizations.

Governor Murkowski concluded his remarks stating, Lighthouses are a significant, historical part of the sea-going traditions of Southeast Alaska. I appreciate the efforts of Secretary Norton and the Department of the Interior, the Coast Guard, and the Gastineau Channel Historical Society to keep the lights burning brightly at the Sentinel Island Lighthouse for generations to come.

For a larger map of Sentinel Island Lighthouse, click the lighthouse in the above map.

The best way to see the lighthouse, however, is on an overnight stay that can be arranged through the Gastineau Channel Historical Society by calling 907-586-5338.

Another way to possibly see the lighthouse is on one of the many whale watching trips out of Auke Bay. The tours offered by Allen Marine Tours seem to pass by the lighthouse most regularly, but they seem to cater primarily to cruise ships. If you are traveling between Juneau and Haines/Skagway on the Alaska Marine Highway or Alaska Fjordlines, Inc., you will also get a view of the lighthouse.


An overnight stay at Sentinel Island is not like a traditional lighthouse B&B experience. First, there arent real beds, and second the only breakfast you get is what you bring and cook yourself. This isnt a drawback. Rather, it is what makes a visit to Sentinel Island unique and memorable. Your transportation options to the island are either a helicopter or a boat (or a kayak, I suppose, if you are really adventurous). For sleeping arrangements, you can use the supplied foam mattresses on either the queen-sized plywood bed in the hoist house or on a pair of plywood bunk beds located in the lighthouse. Living conditions for the lighthouse keepers and Coastguardsmen might have been less spartan, but for the duration of your stay the entire island is all yours just like it was for the keepers.

Humpback whales frequent the waters surrounding Sentinel Island, and we spotted several spouting just offshore during our stay. The whales are not too hard to spot, just look around the whale watching boats. We went on a whale watch the day before our stay on Sentinel Island, and I was able to capture this shot of a breaching humpback


Do the overnight stay! While rustic and somewhat primitive, there is no experience like it. Eating wild blueberries, waving to the ferries/whale watching boats and watching for spouting whales are just a bonus to the whole experience.