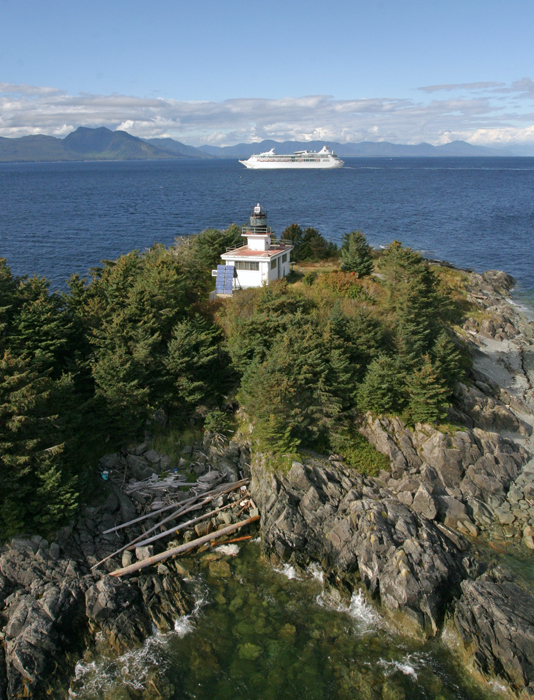 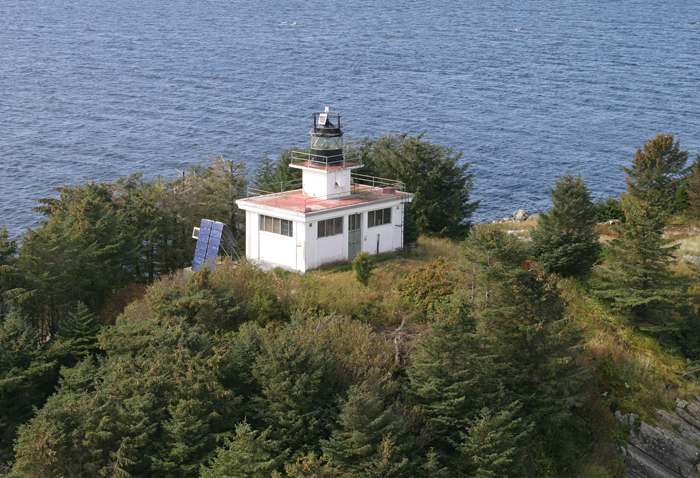 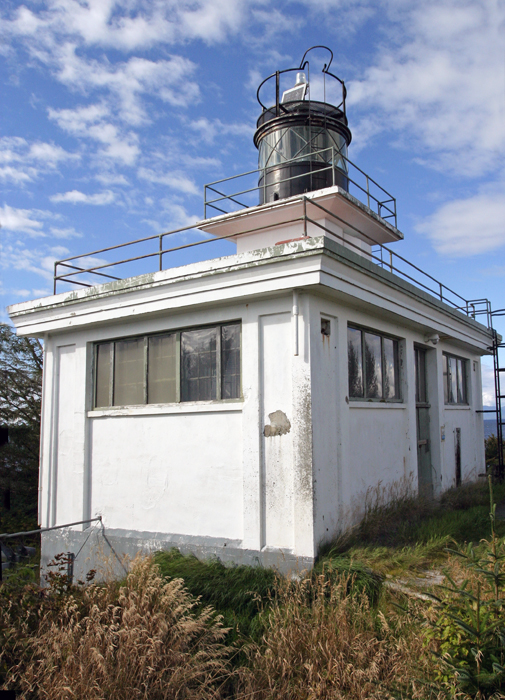 Guard Islands, a pair of small, rocky islets, stand sentinel over the northern entrance to Tongass Narrows, which leads south to Ketchikan. Atop the northern and larger of the two islands sits Guard Island Lighthouse, one of the most accessible lighthouses in Alaska. Its history is brief but eventful, much like the history of Alaska itself.

Purchased in 1867 for $7,200,000, Alaska was quite a bargain at roughly two cents an acre. Because much of it was considered an uninhabited arctic wasteland, many decried the acquisition as foolish, but thirty years later the discovery of gold precipitated a boom no one could have anticipated.

For years Native Americans and Russian fishermen, hunters, and traders had plied the waters near Ketchikan, and countless lost vessels attested to the dangers of the shallow inlets and dense fog. Although only two years after the United States acquired Alaska the Senate requested a review of the Northwestern coasts to determine suitable spots for lighthouses, funding was not provided for another thirty years. Several day beacons and buoys were installed as minor aids to navigation, but it wasnt until the Gold Rush, triggered by the 1896 discovery, that private citizens, and traders clamored loudly enough for the Lighthouse Board to receive funding for much-needed light stations.

Some speculated that Congress dragged its feet in the hope that private enterprise would provide necessary development, or perhaps the naysayers who viewed Alaska as the countrys largest white elephant prevented federal funds being diverted to it. Whatever the cause for the delay, in 1901 Congress finally appropriated $100,000 for lighthouse construction, ushering in an Alaskan building boom that lasted five years and resulted in twelve lighthouses, with four more constructed in later years.

Construction of Guard Island Lighthouse was authorized on April 21, 1903, and the following November, after plans were prepared, work commenced on the island with a force of men clearing and grading a site for the lighthouse. Work was discontinued on January 1, 1904 on account of rough weather, but resumed in the early part of June. A temporary light was established on the island on December 1, 1903 to serve until the permanent light was ready.

Illuminated for the first time on September 15, 1904, the square, pyramidal, wooden tower stood nearly forty feet tall and housed a lens lantern that produced a fixed white light with red sectors covering Roca Reef and Vallinar Point. A 1,200-pound fog bell, suspended from a beam on the north face of the tower, was struck a single blow every twenty seconds when needed. Also on the island were a

In 1918, the Lighthouse Board requested $28,000 for improvements at the station, writing:

At Guard Island, an important station on the principal inside route, at the northwesterly end of Tongass Narrows, it is desired to replace the present unsatisfactory fog bell with an air diaphone and to construct a suitable permanent light and fog-signal building to replace present temporary wooden tower; also to erect another dwelling in order that two keepers may be assigned instead of one as at present, and thus provide for continuous day and night watches.

Guard Island initially had a head keeper and an assistant, but the position of assistant keeper was discontinued by 1913.

The wood used for Guard Island Lighthouse, as well as for several other contemporary Alaskan lighthouses, soon deteriorated in the harsh conditions. After all, Ketchikan is one of the rainiest places on earth, with 176 inches annually, and the winters are foggy, windy, and freezing cold. By the 1920s all the lighthouses except Eldred Rock (1906) were falling apart, and on March 28, 1922 Congress finally provided funds for a new lighthouse, fog signal, and dwelling at Guard Island.

Work on the improvements began on July 1, 1922 and was completed the following year, save the installation of the fog signal equipment. A reinforced, concrete building, measuring twenty by thirty-six feet and with a square tower protruding from its roof, was built to house the fog signal and new light, and a second dwelling was built about 100 feet north of the new lighthouse. An acetylene light placed inside a drum lens in the towers helical-bar lantern room produced a double flash every six seconds. A type C diaphone fog signal was placed in operation on February 25, 1924, sounding a five-second blast every thirty seconds during thick weather.

The rough conditions and close quarters on this small Alaskan island proved too much for some of the lighthouse-keeper families, whose constant squabbling was no secret to mainlanders. The most dramatic conflict resulted in the murder of the assistant keepers wife, who had been having an affair with the head keeper. During Prohibition, life wasnt exactly smooth sailing for those on the mainland either. One Ketchikan old timer recalled, Bootlegging and gambling were rampant in the Southeast. It wasnt that uncommon for folks who got in over their heads to show up dead. And a couple of them did arrive in that condition at Guard Island, stashed in the cabin of a drifting boat that two keepers discovered near the station.

The change from civilian lighthouse keepers to Coast Guard personnel came in 1939, a year that also saw the installation of a radiobeacon on the island. According to locals, the coastguardsmen were cut out of a different cloth than the old lighthouse keepers, who, like the early trappers and gold seekers, could stand the harsh conditions and isolation (except for the occasional homicide).

Otto Gibbs arrived at Guard Island in December 1947 with his wife Dorothy and two small children. One evening, Dorothy was listening to the popular radio show Truth or Consequences, when she was stunned to hear that the consequence for William Livingston, one of the guests on the show, was to deliver a bucket of ice to Guard Island Lighthouse! Not too long afterwards, Livingston, with bucket in hand, showed up at Guard Island accompanied by Coast Guard Lt. Commander Cannon. This photograph shows Livingston on the left, an unknown woman, Keeper Gibbs (with bucket), Dorothy Gibbs, and Lt. Commander Cannon. The weekend after the visit, the Gibbs family traveled to Ketchikan to be part of a Truth or Consequences broadcast, wherein their isolated existence on little-known Guard Island was described to people all across America.

Eventually, Guard Island Lighthouse was converted into a stag station, run by four coastguardsmen. For company, the crews usually had a dog or two, but for several years the station was well known for its pet deer. In fact, during the first few months of 1966, there were actually two fawns at the lighthouse, Wickie and Kado. The station dogs were not too happy with the situation, as they had been supplanted as mans best friend.

The deer had a pampered existence at the lighthouse. Wickie loved to be petted and to have her chin and ears scratched, and, at night, she would sleep at the foot of Daniel Youngs bunk. A feeding box was kept in one corner of the living room, but the deer didnt exactly keep to their vegetarian diet, becoming quite fond of such delicacies as pepperoni and sausage. The deer were free to roam around the entire island and wandered in and out of the dwelling at will. The only complaint the men had regarding their unique pets is that they couldnt figure out how to housebreak them.

April 25, 1966 was a sad day at Guard Island. Kado came up missing. Based on past experience and a thorough three-day investigation, it was believed that Blackie, one of the stations dogs, had chased Kado from the island. Blackie was accordingly brought to trial, with three of the coastguardsmen filling the roles of judge, prosecutor, and defense lawyer. The scars on Wickies legs were presented as evidence against Blackie, but absolute guilt could not be proven. Spared a harsher sentence, Blackie was banished to a nearby island for the remainder of the year. Sadness returned to the station just a few months later when an accident claimed the life of Wickie on August 1.

Just three days later, a plane landed at the station bringing an unexpected surprise, another small doe. The entry in the stations log for that day reads: Due to the recent death of Wickie and the new deer coming from the sky, the deer was named Angel and was sincerely welcomed by the crew at Guard Island. Almost two years later, Stan Oaksmith of Ketchikan flew out to the station by float plane and presented a one-month-old buck. Angel apparently didnt care too much for the new arrival, but eventually grew to accept his presence.

The final entry in the stations Register of Visitors, made on July 31, 1960 by William McKey, reads Disestablished Guard Island Light at 14:45 this date. Thus ended the reign of keepers on the island. The vacant buildings repeatedly fell victim to vandals in the hippie sixties, prompting the Coast Guard to dynamite the outbuildings and keepers dwellings to rubble.

The Southeast Area Council of the Boy Scouts was prepared to enter into a long term lease for Guard Island in 1997, but the amount of work to restore the lighthouse and some requirements in the lease agreement made them decide against it. Guard Island Heritage, Inc. hopes to obtain the lighthouse under the National Lighthouse Preservation Act of 2000. The group wants to transform the lighthouse into a maritime art gallery and to circle the island with a boardwalk. A self-guided trail would inform visitors about the wildlife, vegetation, and history of the island. If their plans are realized, many interested visitors could experience, at least briefly, what life would have been like for the hardy keepers of Guard Island Lighthouse.

For a larger map of Guard Island Lighthouse, click the lighthouse in the above map.

A Lighthouse Excursion to Guard Island Lighthouse is offered from Ketchikan. However, Guard Island Lighthouse is one of the few in Alaska that you can view by car. From downtown Ketchikan, drive north on the main road (Tongass Avenue) for just over eleven miles. You can see the lighthouse from the main road, or, to get closer, turn left onto South Point Higgins Road and follow it downhill. On your left, there will be a grove of trees from which you can get a good view of the lighthouse.


When I was in Alaska, I was quite shocked to learn that between 1917 and 1953 the Territory of Alaska would pay $2 for each pair of eagle talons. This bounty was intended to reduce eagle depredations on fox farms and the fishery stock. As a result, over 100,000 eagles were killed during this period. Some of the lighthouse keepers in Alaska shot their share of eagles including this one being displayed at Guard Island.