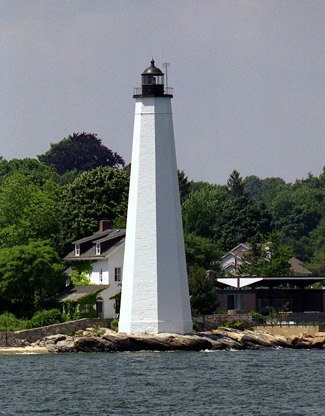 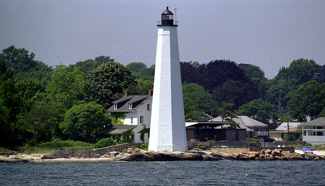 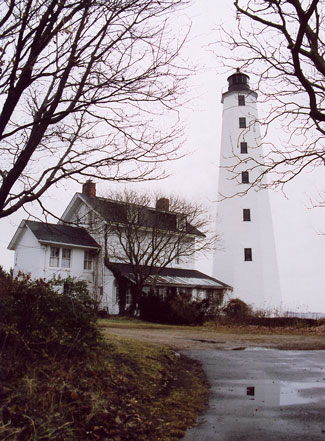 New London, Connecticut is a veritable paradise for lighthouse lovers. The Coast Guard Academy, which operates a museum featuring a number of exhibits relating to lighthouse history, is found at the north end of town, and at one vantage point on the towns Pequot Avenue, which runs alongside the Thames River near its entrance from Long Island Sound, it is possible to see at least five lighthouses (New London Harbor, New London Ledge, Race Rock, Little Gull Island, and Avery Point) at once, if there is no fog. Locally known as Pequot Avenue Lighthouse to distinguish it from the lighthouse just offshore, the present New London Harbor Lighthouse is Connecticuts oldest and tallest lighthouse and provides an interesting architectural counterpoint to its much newer and flashier neighbor, New London Ledge Lighthouse. Its also a reminder of the glory days early in the countrys history when New London was the third busiest whaling port, behind New Bedford and Nantucket. The busy port also attracted several immigrants, leading to the beach area near where the lighthouse stands being used as quarantine ground in the 1750s for recent arrivals to the New World infected with smallpox, a recurring problem at the time.

In 1760, the colonial legislature of Connecticut passed an act creating a committee to pursue the funding, construction, and staffing of a new lighthouse for the harbor entrance at New London. The following year, thousands of lottery tickets were sold to raise £500 for the lighthouse (a popular method of raising funds for construction projects in those days). The lighthouse, a sixty-four-foot-tall stone tower with a wooden lantern at the top, was finished that same year at the west side of the harbor entrance. The construction cost came to £715, and the construction committee, who had paid for the overrun out of their own pockets, was reimbursed using the colonys public treasury. The lighthouse was the first one in the harbor and only the fourth to be built in the American colonies.

Nathaniel Shaw sold the land for the lighthouse to the government and also served as the first keeper of the light. Visitors to New London today can tour the Shaw Mansion, where one of the 1760 lottery tickets for building the lighthouse is on display. Led by Benedict Arnold, British forces raided New London on September 6, 1781 and burned most of the town to the ground in an attempt to destroy the Revolutionary privateer fleet and naval stores warehoused there. Being built of stone, both Shaws mansion and the lighthouse survived the attack.

By 1799, the lighthouse had developed a crack extending ten feet down from the lantern. In addition, the light was so dim as to often be indistinguishable from the lights of the surrounding homes, and from the west the beacon was completely obscured by a point of land. Congress allocated $15,700 for a replacement lighthouse on May 7, 1800, and later that year, a New Londoner by the name of Abisha Woodward began construction on the current octagonal, tapered, eighty-foot-tall tower. Sitting on a foundation of a mixture of granite, brownstone, and native stone, the tower was built of freestone, hammered smooth and laid in courses. The towers thick stone walls are lined with brick, and a wooden spiral staircase originally led up to the lantern room. Since construction of the tower, various renovations have been affected such as installing a new lantern with a copper dome, repainting the exterior walls with hydraulic cement and whitewash, and replacing the interior stairway with a metal one.

When the new station opened in 1801, its flashing light was produced by oil lamps and an eclipser. This apparatus was replaced in 1834 by eleven lamps with thirteen-inch reflectors. Finally, a fourth-order Fresnel lens, which remains in the lighthouse today, was installed in 1857. The first keepers house deteriorated quickly and was replaced in 1818 by a five-room, frame dwelling. The current gable-roofed, two-and-a-half-story keepers residence was built in 1863, and in 1900 it was expanded to provide quarters for the assistant keeper.

During the War of 1812, New London Harbor Lighthouse was extinguished. The British did not attack the station during the conflict, as it was guarded by colonial troops, but instead invaded the undefended Little Gull Island Light, taking all of its lamps and reflectors.

Following the defeat of President Martin Van Buren, a democrat, by William Henry Harrison, a Whig, many Whigs in New London pressed Thomas Ewing, the new Secretary of the Treasury, to dismiss Keeper John G. Munn, who had been a vocal supporter of Van Buren. The move was successful, and after nine years as keeper, John G. Munn was replaced by John Mason on July 1, 1841. Upon learning of his dismissal, Munn reportedly blackened the reflectors and put the lamps in such disorder that it took weeks for Mason to repair the mischief. John Mason was quite popular locally, having fished out of New London for over thirty years and served as one of the towns selectmen, so there was quite the uprising when after just four months he was removed as keeper and Munn was reappointed. The situation was soon resolved when Keeper Munn died shortly after being reappointed and Mason was appointed keeper on December 8, 1841.

New London was not the first town where landlubbers found themselves at odds with the maritime community. In 1903, the thorn in the town residents side was the fog siren newly installed at the lighthouse. The sizable number of seasonal summer residents was especially dismayed after arriving for their annual period of rest and recuperation from big-city stresses only to have the new fog signal prevent any possibility of a good nights sleep. While city residents complained about the horrible groaning and shrieking, local ship captains found the sound of the long-requested signal to be sweet music to their ears when attempting to navigate the harbor through a pea-soup fog.

A fog signal was first installed at the lighthouse around 1857 in the form of a steam whistle. This was later upgraded to a Daboll trumpet, which was the type of signal that had been in operation for many years before a new fog signal house was built and the troubling fog siren was placed in operation during the summer of 1903. The problem was finally resolved on February 1, 1906, when the maligned fog siren was replaced by a Daboll trumpet. The whole issue became mute in 1911 when New London Ledge Lighthouse was activated, and the harbor lights fog signal was turned off for good. The harbor lighthouse was automated in 1912, and the property, which had been divided in half by the construction of Pequot Avenue in 1868, was auctioned off as two separate parcels.

Alice Bunner purchased the keepers dwelling adjacent to the lighthouse for $21,100 in 1928, and in 1971, Laurence H. Bunner, Alices son, was the sole occupant of the nine-room residence. The dwelling is reportedly still owned by members of the Bunner family.

New London Harbor Lighthouse is not the easiest lighthouse to visit, as the keepers house and surrounding ground is privately owned. Limited views are available from the sidewalk on Pequot Avenue, but the best views are from the water. In October 2009, the New London Maritime Society became the new legal steward of New London Harbor Lighthouse, after the Coast Guard excessed the tower through the National Historic Lighthouse Preservation Act of 2000. A formal transfer ceremony was held at the lighthouse on October 13 of the following year, wherein the deed for the lighthouse was presented to the New London Maritime Society. The tower and surrounding land, however, remains off-limits to the public except during special tours offered by the society.

In 2014, volunteers from the local carpenters union erected scaffolding around the lighthouse so that volunteers from Painters Local 1122 could clean, repoint, and paint the historic tower. The Maritime Society had raised $150,000 for the restoration project, and besides paying for needed materials, some of the funds were used to construct new retaining walls at the base of the tower to replace those washed out by Superstorm Sandy.

For a larger map of New London Harbor Lighthouse, click the lighthouse in the above map.

From Interstate 95 in New London, take Exit 83 and travel south on Highway 1 (Colman Street) for 1.6 miles to Bank Street. Turn left onto Bank and then take your second right onto Montauk Avenue. Follow Montauk for 2.2 miles until it ends at Pequot Avenue. Turn right on Pequot, and the lighthouse will be ahead on your left. The keeper's residence is privately owned, and the grounds are not open to the public. In fact, during our visit, there was a "No Trespassing and No Photographs Sign" at the entrance to the property. I'm not sure how they can prohibit photographs, but the best views surely are from the water.

The tower is owned by the New London Maritime Society, Inc., and the keeper's dwelling is privately owned. Grounds/dwelling/tower closed.