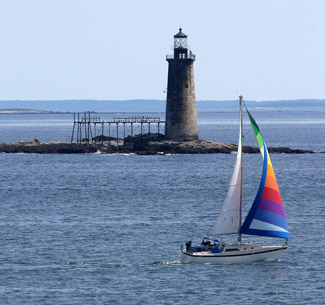 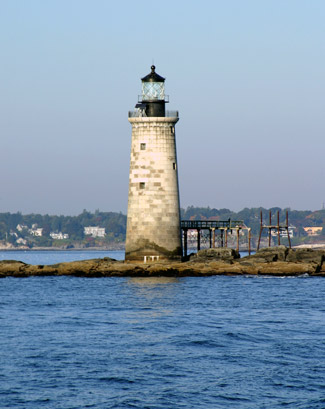 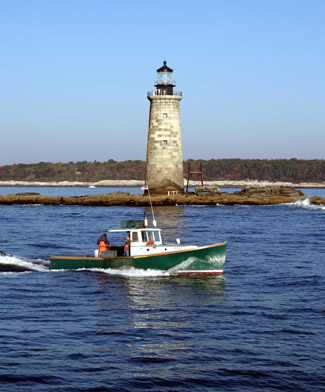 Ram Island Ledge is a jagged finger of rock one-quarter mile long, marking the northern entrance into Portlands outer harbor. The ledge runs southwest off nearby Ram Island, and has long been one of the most feared spots by local mariners, despite being just over a mile from Portland Head Lighthouse.

The first navigational aid marking the site was an iron spindle placed at the southern edge of the ledge in 1855, although it was only of practical use during daylight. In 1873, a fifty-foot-tall wooden tripod replaced the spindle. This was a definite improvement, but the force of the open ocean frequently assaulted the exposed structure, and it was washed away at least three times.

On the evening of February 24, 1900, the 440-foot steamer Californian left Portland just before midnight in a brisk southeast wind with splatters of rain. Less than an hour later, not long after the pilot had left, the Liverpool-bound vessel was hard aground on Ram Island Ledge. Captain John France had let his vessel drift slightly off course, and before he discovered his error, the ship hit the reef straight on, scraping forward and coming to rest in a small hollow in the reef.

Fortunately, the twenty-one passengers and crew were all safely rescued, and the ships cargo was also unloaded. The ship remained stranded on the reef for six weeks before it was finally pulled free. The hull was badly damaged, but it was patched up, and after repairs in Boston, the steamer returned to service.

This high-profile near-disaster focused public attention on the hazard posed by the reef. The next year, the inspector and engineer of the First Lighthouse District, after noting the increase in the grain trade from approximately one million bushels in 1895-1896 to over fourteen million bushels in 1900-1901, included the following paragraphs in a report to the Lighthouse Board recommending an additional navigational aid to assist vessels calling at Portland.

[The vessels] course leads them between Ram Island Ledge and Jordans Reef which are three-quarters of a mile apart. But Witch Rock, upon which there are only four fathoms at mean low water, stands about 1,000 yards directly in front of this passage, in the middle of the fairway and in the track of these deep draft ships, to which it is a grave peril; for they cannot take a safe berth from it on either hand without danger from Jordans Reef on the one side or Ram Island Ledge on the other.

Considering the excellence of this port, the class of ships engaged in its growing commerce, and their great peril from these three ledges, in an otherwise excellent fairway, we recommend that a light and fog-signal be established on Ram Island Ledge, to guide ships in safely between Witch Rock and Ram Island Ledge.

A Congressional act of June 28, 1902, authorized the construction of a lighthouse and fog signal on Ram Island Ledge at a total cost of $166,000 and appropriated an initial $83,000 for the project. Work was delayed until the following spring, as plans had to be prepared and accessing the rocks that were under water two-thirds of the time would have been almost impossible during the winter. In the meantime, more ships were lost on the reef. On September 22, 1902, the British three-masted schooner Glenrosa wedged itself on the rocks after its captain was misled by the sound of the foghorn at Portland Head Light into thinking his ship was steering down the middle of the channel. The crew was able to stay aboard for the night and row to shore at daybreak, but the ship was a total loss. Less than three months later, the schooner Cora & Lillian suffered a similar fate.

Title to the ledge was obtained on March 10, 1903 through the payment of $500 to two Cape Elizabeth families, and later that month a $33,679 contract had been signed with the Bodwell Granite Company of Rockland to supply the granite stones for the lighthouse from its quarry on Vinalhaven. The plans for the lighthouse called for a granite tower twenty-eight feet in diameter at the base, seventy feet in height to the surface of the lantern deck, and consisting of 699 blocks set in thirty-five courses.

Work at the site finally began on May 1, 1903, when the foundation rock was leveled and cut down to three feet above mean low water. A staunch timber bulkhead, one hundred feet in length, was bolted to the ledge seaward of the site to offer some protection for the workmen. After a platform, equipped with a hoisting engine and derrick was built on the ledge, the first stones, weighing nearly four tons each, were landed and set in place on July 9. Work continued until September 30, when sixteen courses had been finished and two cisterns constructed inside the base of the tower. During the project, the workmen slept in temporary quarters erected on Ram Island, about 600 yards from the construction site.

Work on site resumed in 1904, after Congress had provided an additional $50,000 on March 3, 1903 and $33,000 on April 28, 1904, and the last course of stone was in place by July. The tower, which was lined with enameled bricks, received its thirteen-ton, sixteen-foot-tall lantern room that fall after it had arrived in Portland via rail from Atlanta, where it had been fabricated. Weather and supply problems delayed the completion of the lighthouse, and it wasnt until April 10, 1905 that the third-order Fresnel lens, imported from Paris, France, was finally lit for the first time.

During the spring and summer of 1905, an iron landing pier, not included in the original plans for the lighthouse, was built adjacent to the tower to facilitate the landing of men and supplies during rough weather. Constructed using surplus funds, the pier stood eighteen feet high and measured seventy feet long and twenty feet wide. An oil house and fog bell were also added to the lighthouse during 1905, with the fog bell being placed in operation on August 28 and being struck a single blow every ten seconds when needed.

William C. Tapley was appointed the first head keeper of Ram Island Ledge Lighthouse and was assisted by two men: Edward T. Merritt and Wellington M. Latham. Tapley began his career as an assistant keeper at Saddleback Ledge in 1886, and then was in charge of the lighthouses at Goose Rocks and Deer Island Thorofare before being transferred to Ram Island Ledge.

During Tapleys time at Ram Island Ledge Lighthouse, the lobster fishermen of Casco Bay petitioned the Bureau of Lighthouses to prohibit keepers from engaging in the lobster business. The fishermen felt the keepers had an unfair advantage as they lived right on the fishing grounds and could haul their traps during brief lulls in the weather, when it wasnt possible for regular fishermen to visit their traps. Inspector J. McDonald investigated the claims and found the fishermen were making far more money than any lighthouse keeper. In response to an inquiry into the matter by the inspector, Keeper Tapley wrote: I have never owned or hauled a lobster trap, I have not time and do not care to fish. My time is occupied in and around my station, and I prefer to be a light-house keeper rather than a fisherman. The two occupations do not go well together. Officially, lighthouse keepers were permitted to haul lobster traps as long as it didnt interfere with their work at the station.

In 1922, Keeper John B. Dewyea, who replaced Tapley and had been on nearby Halfway Rock Lighthouse for nearly thirty years, piloted two men to shore who were traveling without a boat compass and had become lost in fog near the lighthouse.

At about 10:30 p.m. on August 23, 1927, a motorboat wrecked on Ram Island Ledge during a thick fog. In order to attract the attention of the keepers, the man aboard the boat poured gasoline on a mattress and set it afire. Assistant Keeper Frank William Alley noticed the signal and helped the boater into the tower where he was provided with lodging for the night.

In late 1958, an underwater power cable was laid between Portland Head and Ram Island Ledge, allowing the ledge lighthouse to be automated. The last resident Coast Guard personnel were removed from the station on January 14, 1959. The beacon was converted to solar power in 2000, and in October 2005, care of the lighthouse was licensed to the American Lighthouse Foundation. The original third-order Fresnel lens has been replaced by a modern 300mm optic, showing two white flashes every six seconds, while an automatic foghorn blasts once every ten seconds when needed.

A Notice of Availability, dated September 2008, announced that Ram Island Ledge Lighthouse was excess to the needs of the United States Coast Guard and would be made available at no cost to eligible entities defined as Federal agencies, state and local agencies, non-profit corporations, educational agencies, or community development organizations for educational, park, recreational, cultural or historic preservation purposes. After no acceptable applications were received, the lighthouse was placed on the auction site of the General Services Administration on June 30, 2010. The first bid was received a few days later, but the bidding did not heat up until the property entered the soft closure period in early September, when a new bid had to be received each day in order to extend the auction.

Wanting to keep the lighthouse in Maine hands, Bob Muller, a Brunswick businessman with a background in IT and high-tech image mapping, launched a website to attract a few thousand prospective owners, who were willing to pay $49 for a stake in the lighthouse. The bidding, however, soon eclipsed the amount of money Muller was able to pool, and it seemed the auction would come down to a battle between Portland real estate developer Arthur Girard and Dr. Jeffrey Florman, a neurosurgeon from Windham. Through their bids, these two men elevated the price of the lighthouse by over $100,000. On Friday, September 10, the two men flipped a coin to determine which of them would remain in the auction and likely become the owner of the lighthouse.

After winning the coin toss, Florman submitted a bid of $180,000 to top Girards last bid, but other parties, who had yet to bid on the property, were still lurking. On September 13, a bidder with the interesting codename of arakiran offered $185,000 for the lighthouse, and the following morning redtide submitted a bid of $190,000 just minutes before 9 a.m. Had the bid come in after 9 a.m., the auction would have been extended another day, but as no other bids were received between 9 a.m. and 3 p.m. EST on September 14, redtide won the auction. Turns out redtide was another codename for Florman, who had been submitting previous bids as MAINE.

Florman is not a lighthouse buff and does not own a boat, but rather purchased the lighthouse out of a simple desire to preserve a historic property. No commercial use of the lighthouse is planned.

For a larger map of Ram Island Ledge Lighthouse, click the lighthouse in the above map.

This light is best seen by boat, but it is also clearly visible from Portland Head Lighthouse. Portland Discovery offers a Lighthouse Lover's Tour that should give a good view of this lighthouse from the water.