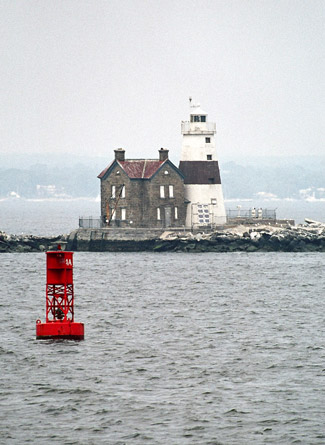 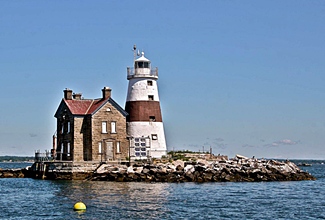 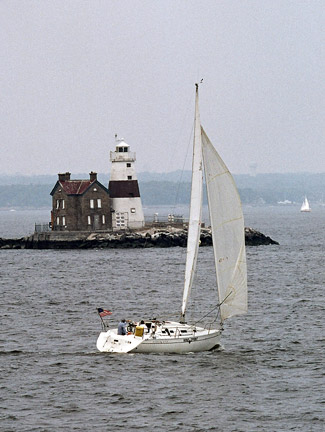 Rocky reefs, 1,650 yards northwest of Sands Point on the western end of Long Island Sound, carry a chilling legend of how they received their name. According to folklore, which has never been proven true, the British avoided public executions in Colonial times because they would inflame the revolutionary spirit of the American people. Instead, they would carry the condemned to these reefs at low tide, chain them to rings embedded in the rock, and wait for high tide to carry out the death sentence. Some say the skeletons were left to torture the minds of the newly condemned as they faced certain death. The ghosts of the victims later had their revenge when a shipload of British soldiers, sent to pursue Washington on his retreat from Manhattan to White Plains, foundered at the reef and no redcoats survived.

The legend of the executions had such hold, that when lightkeepers were assigned to Execution Rocks, they were under a unique contract. No lightkeeper was to ever feel chained to the reef. Instead of stating a set length of duty, their contract read that their length of service was for as long as they were willing. If for any reason they requested a transfer, it was instantly granted  perhaps that is why only one head keeper spent more than a decade at the station.

A more benign tale of how the place got its name comes from the early settlers of nearby Manhasset Neck (Cows Neck) who said that many ships were executed on the rocks while trying to make their way past the dangerous reef en route to Manhasset Bay.

Built in 1809, Sands Point Lighthouse is situated close to Execution Rocks, but proved ineffective at warning mariners of the offshore danger during heavy fog or stormy weather. In 1837, Congress appropriated $5,000 for a revolving or double light upon the south side of Execution Rocks opposite Sands Point. An inspector sent to examine the site reported that the allocated amount would be insufficient for a lighthouse, but suggested a light-boat could be deployed instead. This triggered some discussion of whether the appropriation applied to a lightship, but the point was moot as the funding was inadequate for a lightship as well.

A decade later, on March 3, 1847, $25,000 was appropriated to build a lighthouse directly on the rocks, as it would, in the long run, be cheaper than a lightship. The architectural design was granted to Alexander Parris, who a few years before had drawn up a similar tower for Maines wave-swept Saddleback Ledge. After reviewing the reef, Parris selected a site for the lighthouse. Local mariners argued for a different site, and the Lighthouse Board sent out an independent body to study the issue that ended up recommending yet another site for the proposed lighthouse. Parris insisted that construction at this site would cost four to five times more than at the site he had originally selected, and the lighthouse was eventually built at the site first proposed by Parris  the largest exposed rock on the reef.

The construction contract went to the lowest bidder, Thomas Butler, who proved to be less than capable. Subcontractors did the majority of the work, and the lighthouse was completed almost one year behind schedule. The light went into service in 1850 under the direction of Daniel H. Caulkins, who retained his previous position as keeper of Sands Point Lighthouse and was given two assistants to help with the additional light.

Execution Rocks Lighthouse rises fifty-eight feet above Long Island Sand, and tapers from a diameter of twenty-six feet at its base to thirteen feet at the lantern room. The original lighting apparatus consisted of fifteen lamps set in twenty-one-inch reflectors, with red lamp shades being used so the light could be distinguished from the white light of Sands Point. In 1856, a fourth-order Fresnel lens was installed in the lantern room, and the lights characteristic was changed to fixed white at the same time the light at Sands Point was changed to flashing white.

Initially, there was no formal keepers dwelling at the station, though one of Keeper Caulkins assistants did live with his wife in the base of the tower. On April 1, 1851, William Craft took over as head keeper, and both he and his assistant lived in the tower on the rock. When first built, the tower was very leaky, making for miserable living conditions, and there was some apprehension about the safety of the structure. Stones placed east of the tower to protect it from heavy gales were soon washed to the west side of the ledge. On August 18, 1856, Congress appropriated $5,250 to secure the towers foundation, and a protective work was put in place the following year.

During a heavy blow in December 1857, Keeper Joseph Brundage spied a man in a boat drifting down the sound before the wind. With the assistance of Captain John Marshall, one of the Hell Gate pilots, Keeper Brundage towed the wayward boat to the lighthouse, where the crafts occupant, an intoxicated old man, was, with difficulty, brought to himself.

Despite the tight quarters at the station, it would be seventeen years before a separate keepers dwelling was erected. Congress allocated $19,000 on March 2, 1867 for repairs and renovations at the station, and later that year work began on a two-and-a-half story, granite dwelling that was built atop a stone pier and linked to the western side of the tower. In addition to a new dwelling, the station also received a new iron lantern, iron deck-plate, and iron windows for the tower, and a third-class Daboll trumpet was installed on the second floor of the tower to replace a fog bell. The caloric engines that sounded the fog signal consumed ten pounds of coal per hour, and as it took forty-five minutes to get up heat, the keeper was given a hand trumpet to sound during that period.

The fog signal was upgraded through the installation of a first-class Daboll trumpet in 1880, and in 1891, a building was built east of the tower to house an automatic steam siren whose boilers were fed water from a new cistern installed in the base of the tower. New fog signal machinery, consisting of two, thirteen-horsepower oil engines with first-class compressed-air sirens, was installed at the station in 1904.

On January 1, 1890, a thirty-six-and-a-half-degree red sector was inserted in the stations fixed white light, eliminating the need for a light on the south end of Hart Island. In May 1892, the lights characteristic was changed to a white flash every ten seconds, and Sand Point Light was made fixed white.

By 1894, the keepers dwelling had settled, and the southwest wall had to be taken down and rebuilt atop a concrete foundation. A covered passageway linking the dwelling to the fog-signal house was built in 1898. Originally painted white, Execution Rocks Lighthouse received its distinctive brown band on May 15, 1899, and in 1907 a horizontal band was placed on the southeasterly front of the station and on the fence on the westerly front of the station. A concrete oil house was added in 1913.

Willis Green served as head keeper from 1903 to 1906, and found himself in quite the predicament in February 1905. Keeper Green was accustomed to rowing to Manhasset or Port Washington to get daily provisions for his family, but when the sound became filled with large ice floes, his trips became impossible and his stock of supplies grew steadily smaller. Green made a desperate attempt to reach shore one day and nearly lost his life when he became wedged between two ice floes. After his family had been without food for over a day, Green made a supreme effort to row ashore, and managed to do so after two hours of hard work. His friends in the village wanted to help him return to the lighthouse, but Green insisted that no one else make the risky journey. Many villagers watched anxiously as Green picked his way back to the lighthouse, and a cheer went up when he landed safely at the lighthouse.

Dense fog surrounded the station on December 8, 1918. Keeper Peter Forget had been running the fog signal since 7:00 a.m., when shortly after noon, he decided to take a lunch break. He noticed the engine that provided power to the light and foghorn was running slower than normal and decided to check it out. As he opened the door to the engine house, a wall of flames greeted him. He immediately radioed a distress signal, and New York Citys fireboat Cornelius W. Lawrence was dispatched to the station.

Before aid arrived, the keepers, armed with buckets and fire extinguishers, courageously fought the blaze. They were soon helped by Navy patrol boats, and soldiers from Fort Slocum, who had jumped into rowboats when they received the call. Just in the nick of time, the troops removed barrels of kerosene from a storage unit on the verge of being consumed by the inferno.

The lighthouse, though singed and some of its stonework badly chipped, survived the blaze, but the fog signal house and machinery were destroyed. The eaves on the north end of the dwelling were burned away, along with the gutter on the east side, and the woodwork in the lower hallway of the dwelling was scorched. An act of July 19, 1919 appropriated $10,000 for restoring and improving the light station, and work on erecting a new engine house and repairing the dwelling began in June 1920.

Fire came again in 1921, when an overheated exhaust pipe set the engine rooms roof on fire. This time, only minor damage was incurred, including smoke damage to the lens and clockworks.

A radiobeacon was placed in operation at Execution Rocks on May 1928 as an additional aid to mariners during periods of low visibility.

In May 2007, Execution Rocks Lighthouse was excessed by the Coast Guard and offered to eligible entities through the National Historic Lighthouse Preservation Act of 2000. Historically Significant Structures was the only organization to submit an application, and in January 2009, the group, led by Craig Morrison, received the deed for the lighthouse from the federal government.

Hector Barsali took advantage of the first public tour of Execution Rocks offered in July 2009 by its new owners. A resident of nearby Bayside, Barsali served as a Coast Guard keeper at Execution Rocks in 1961 and recalled that the station was staffed during his service by five men, with three on and two off. Its very nostalgic for me, remarked Barsali after examining the lighthouse. Im a little choked up.

Participants in the tour were required to wear breathing masks to protect against peeling lead paint and mold in the keepers quarters, but this minor inconvenience was well worth the opportunity to set foot in the lighthouse that hadnt been lived in since 1978.

Historically Significant Structures had raised enough money from tours and grants to have the lighthouse in good enough condition to receive overnight visitors in 2013. At that time, the accommodations were quite rustic, consisting of air mattresses, a portable toilet, and a propane grill for cooking food.

For a larger map of Execution Rocks Lighthouse, click the lighthouse in the above map.

Execution Rocks Lighthouse is best seen by boat. Historically Significant Structures offers a few trips to the lighthouse or you can contact Port Washington Water Taxi to arrange a trip to fit your schedule.

The lighthouse is owned by Historically Significant Structures. Grounds/dwelling/tower closed.