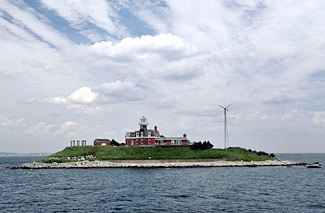 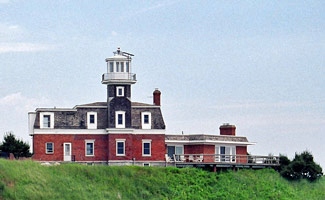 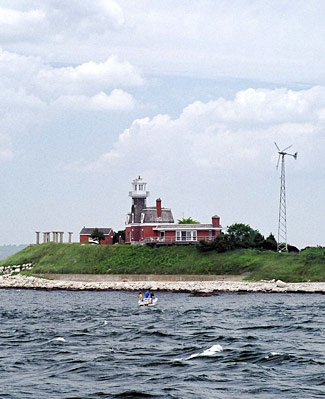 On the north side of Fishers Island are several small islands, the largest two of which are known as the Dumplings. When considering the site for a new lighthouse in 1838, Lt. George M. Bache felt that a site preferable to the North Dumpling may be found on the neighboring islet, the South Dumpling because a line drawn from the South Dumpling to the light at Stonington, passes through a clear channel, while the one drawn from the North Dumpling, in the same direction, will pass very close to the shoals to the northward. Bache also noted: two small lights, one higher than the other, ranging in the channel, and shown from the South Dumpling, will prove a better guide to vessels passing through from the eastward than a single light on the North Dumpling. Nine more years passed before Congress provided $5,000 for the lighthouse, which contrary to Lt. Baches advice, had a single light and was placed on North Dumpling.

John Winthrop, son of the governor of the Massachusetts Bay Colony, acquired Fishers Island and the surrounding islets, including the Dumplings, in 1639. North Dumpling Island remained in the Winthrop family until 1847, when it was sold to the federal government for $600 for lighthouse purposes. Construction soon began on a brick keepers dwelling with an attached twenty-five-foot tower. The first optic employed in the lantern room consisted of seven lamps set in fourteen-inch reflectors, with red shades used to produce a unique characteristic. The light was upgraded to a sixth-order Fresnel lens in 1855.

The first keeper assigned to North Dumpling Lighthouse was Riley Clark, but when the time came to activate the new lighthouse, Clark was nowhere to be found, and no one seemed to know where he lived. In the meantime, a local sea captain named Joseph Dayton was given temporary authority. The customs agent in New London supported the captain as a permanent replacement for the missing Clark, writing to the Treasury Department: The commercial community here and elsewhere has a deep interest in having a Light Keeper who is well acquainted with reefs, rocks and shoals in the neighborhood of the Light House. His arguments were unsuccessful, as in December 1848 Alfred Clark was named the official keeper, and the appointment of the still-missing Riley Clark was canceled.

When Alfred Clark began his duty, he found a fog bell that had been placed on the island as a private navigational aid by the New York and Stonington Steamboat Line. When it was foggy and one of the companys ships was scheduled to pass the island, the keeper faithfully tolled the bell. The steamboat company paid him $32 a year for this service, but when Clark found out that the keeper at Little Gull Island was receiving $43 a year for the same work, he refused to operate the fog bell any longer. The company complained to the Lighthouse Board, but they ruled that since it was a private arrangement between the two parties, the keeper had the right to do as he pleased. A few years later, the government installed its own fog bell at the lighthouse, after Congress provided $800 for its establishment on August 3, 1854.

The apparatus used to toll the fog bell would initially run only four times longer than the amount of time it took to wind it up. This inconvenience prompted the request for an assistant keeper to be assigned to North Dumpling Island, but instead the Lighthouse Board simply installed a new apparatus that could toll the bell for forty times longer than the time required to wind it up.

The Annual Report of the Lighthouse Board for 1867 described the lighthouse on North Dumpling as being very much decayed, and its lantern room as worn out and of [an] old pattern. Congress appropriated $15,000 in 1870 to rebuild the station, and the renovations, completed in 1871, included replacing the dwellings roof with a new Mansard roof, and erecting a new twenty-nine-foot tower and lantern on top of the dwelling. A barn was also built for the station at the same time, and the banks of the sluice leading into the pond that served as a basin for the keepers boat were protected by rough granite blocks. The lights characteristic was changed from fixed red to fixed white with a red sector on October 15, 1891, and on July 21, 1892, a fifth-order lens replaced the stations sixth-order lens.

One foggy evening in 1899, the wife of Keeper Joseph T. Fowler was caring for the light alone when the machinery for tolling the bell malfunctioned. After a hazardous climb to the top of the bell tower, Mrs. Fowler managed to toll the lighthouse bell by hand, which prompted the following letter: The lighthouse board has learned with pride and gratitude of your thoughtful courage. It is expected that brave and thoughtful men will be found in its service, but to find a woman able at a perilous time to assume the duties of an absent man and thus prevent peril to life and property is a matter for double congratulation.

A telephone plant was installed on North Dumpling Island by the Southern New England Company in 1902 that enabled the lighthouse keeper to report when a lightship broke adrift in the ice and other emergencies, but when the lighthouse service wouldnt provide a shelter for the equipment, the phone was removed.

During Prohibition, the isolated beaches and islands near North Dumpling were found to be ideal for transferring illegal booze, and citizens of nearby Fishers Island were known to be actively involved in bootlegging. In April 1923, the yacht Thelma-Phoebe was grounded by a storm on the south side of Fishers Island while transporting Scotch. By the time the Coast Guard arrived, the illegal cargo had already been liberated by local residents. In December of the same year, another ship wrecked in almost the same spot, and the whisky on board similarly disappeared. Keeper Henry Burkhardt at North Dumpling came under suspicion of aiding the smugglers and was accused of running extra lights around the lighthouse, which were used as signals between the mainland, boats and Fishers Island. His accuser claimed to have seen the keeper storing, delivering, and selling liquor to local residents. While the Coast Guard did see some strange lights and flares around the station, no evidence was ever found connecting the keeper to illegal activities.

Marie Leclerc lived on North Dumpling Island in the early 1940s when her father was keeper there. Her favorite memory from that period was when her father rescued a member of the DuPont family, and the family later visited the station to show their appreciation. Four adults and a little girl arrived in a Chris Craft speedboat with their chauffeur. We were some kind of impressed, recalled Marie. The chauffeur carried in all kinds of food, cigars, balloons, and buckets of fresh-cut flowers to thank the keeper for his work.

In 1959, the beacon at North Dumpling was moved from the lighthouse to a nearby skeleton tower and automated, and the lighthouse and grounds were sold to George Washburn, a New York investment manager, for $18,000. The new owner found himself in a bit of a quandary. It looked like an interesting investment, so I put in a bid, he said. Theres only one catch. Now that Ive got it, I dont know what to do with it. Washburn rarely visited the island, and his inattention combined with vandalism left the lighthouse in a sorry state.

In 1977, the property was sold for $95,000 to David Levitt, president of the Doughnut Corporation of America, who remodeled and enlarged the keepers dwelling, adding a living room and billiards room. Levitt convinced the Coast Guard to return the optic to the tower and remove the steel skeleton tower from the island, which freed up space for some outdoor sculptures named the Temple of the Four Winds, the Moon Rock, and Meditation Rock.

In 1986, the lighthouse was sold yet again, this time for $2.5 million to Dean Kamen, who had spotted the lighthouse while taking flying lessons. After battling unsuccessfully with Suffolk County authorities for permission to erect a windmill to power his electric generator, Kamen began an extended tongue-in-cheek media campaign. He declared that his island was now the sovereign North Dumpling Republic and that he was Lord Dumpling II. The new nation was to have its own currency, the Dumpling, a national anthem, and a one-boat navy. Lord Dumpling graciously signed a non-aggression pact with his friend, President George H. Bush. The eccentric Kamen, who counts the Segway Human Transporter as one of his many inventions, has been featured on several television shows, including the Today Show and Lifestyles of the Rich and Famous.

Kamen eventually did get his wind generator, and now through the installation of solar power and LED lighting, he can claim independence from another foreign power  U.S. electricity. His green power system provides enough electricity to illuminate his Stonehenge replica, located on the northwest tip of the island.

For a larger map of North Dumpling Lighthouse, click the lighthouse in the above map.


During a cruise past this lighthouse in July of 2003, we were told that the island and lighthouse are now owned by Segway inventor, Dean Kamen. After selling one of his inventions, Kamen purchased a helicopter, fulfilling a childhood dream. Kamen was informed by the wife of his helicopter flight instructor that North Dumpling Island was for sale. To get a close-up view, Kamen landed his helicopter on the island, much to the surprise of the occupants of the lighthouse.

After purchasing the lighthouse and island, Kamen decided to erect a wind turbine for power. The state of New York objected to his plan, so Kamen seceded from the U.S. He signed a fictitious nonaggression treaty with his friend and then-President George H. Bush, and even established his own currency, flag and anthem.