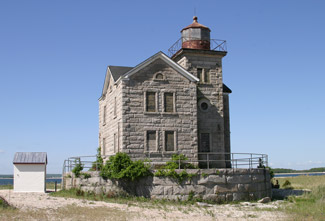 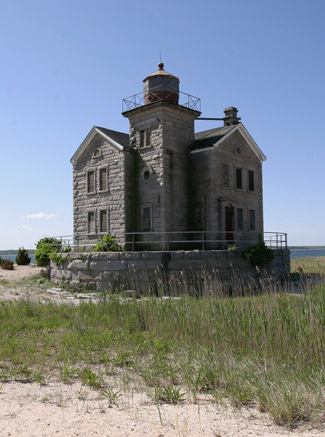 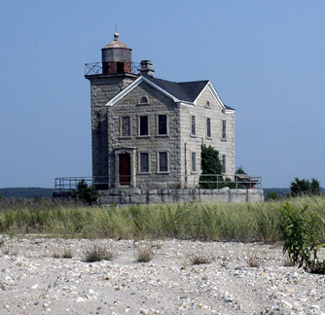 Cedar Island Lighthouse stands sentinel at the end of a lengthy sand spit that protrudes from the bluff at Cedar Point State Park and guards the entrance to Sag Harbor Bay. When originally built, the lighthouse was on Cedar Island, named for the small stand of trees on the otherwise barren island, but the Great Hurricane of 1938 filled in the 200-yard gap between the island and the shore, turning it into a peninsula now known as Cedar Point.

Cedar Island stood in the passageway between the south fork of Long Island and Shelter Island, making it hazardous for ships in the area. The lights purpose was to guide whalers and other ships into Northwest Bay and the port of Sag Harbor, which was a thriving whaling port in the early part of the nineteenth century. To mark the numerous shoals and other hidden hazards, the towns whaling fleet began to place stake lights around Sag Harbor as early as 1810, and in 1838, the federal government joined the cause, purchasing Cedar Island from the town of East Hampton for a new lighthouse.

After Congress provided $1,000 in 1837 and another $2,500 in 1838, the original Cedar Island Lighthouse was built in 1839 in the form of a one-and-a-half-story keepers dwelling with a small tower centered on its pitched roof. The beacon in the lantern room was made of nine Winslow Lewis lamps with fourteen-inch reflectors, shining at thirty-two feet above sea level and having a range of 12.5 nautical miles. In 1855, a sixth-order Fresnel lens, illuminated by an Argand lamp, replaced the lamps and reflectors.

After Captain Howland supplied the lighthouse in 1850, he wrote: With the exception of the house being leaky, it is in good order. Lantern is very leaky. It wants, no doubt, reputtying, which I think will make it tight. An attempt has been made to protect the island from washing away by a wooden fence or breakwater. I am fearful that it will not prove effectual. The island was around two acres at that time, but constant erosion reduced that by half in less than seventy years. Several tons of riprap had been put in place when the lighthouse was built, and between 1903 and 1906, 6,600 more tons of rock were added.

By 1858, the dilapidated wooden structure was struggling to support its cast-iron lantern, and Congress eventually approved $25,000 in 1867 to rebuild the station. The resulting lighthouse, built during 1868 under the direction of W. & G. Beattie of Fall River, was constructed with granite blocks atop a circular granite pier. The L-shaped dwelling with a square tower possessed the same Victorian-Gothic architectural style employed at the Roundout, Stuyvesant, and Coxsackie lighthouses, all built around the same time. The lens from the 1839 lighthouse was installed in the new tower, where it shined forty-four feet above the water. In 1882, a machine-operated fog bell was added to the station.

A Civil War veteran named Charles Mulford, who wore a peg leg after being injured in the war, was appointed keeper at Cedar Point in 1897. Mulford was famous locally for buying up every wooden leg he could find around the community. After a 1974 fire at the lighthouse, firefighters reportedly found a forgotten storeroom filled with wooden legs that had only partially survived the fire. In 1903, Keeper Mulford captured a live rabbit at his sea-girt station, and the only explanation he had as to how the animal arrived on the island was that it was being chased by foxes and must have swam from the mainland.

William H. Follett was Cedar Islands last keeper, serving from 1917 to 1934. He had previously been an assistant keeper at nearby Montauk Point, as well as Hog Island Shoal Lighthouse in Rhode Island. On July 13, 1919 the yacht Flyer exploded into flames in the water near the station. Follett managed to row out to the vessel, rescue the three badly burned men on board, and get them to a hospital, but none of them survived the ordeal. Follett lived at the station with his wife Atta, and during the summer, their grandchildren came for extended visits filled with swimming, boating, and fishing.

One morning, Atta asked two of her grandsons to catch some fish for dinner. The ambitious youngsters gathered soft shell clams for bait and after several hours had landed quite a mess of blowfish. The boys cleaned thirty of the fish for a delicious dinner. Afterwards, Keeper Follett asked his grandsons what they intended to do with the other fish they had caught. Their plan to simply throw the fish away was frowned on, and they soon set about cleaning the remaining ninety-seven fish. Whenever asked to provide fish in the future, they first asked exactly how many would be needed. The experiences the brothers shared at the lighthouse with their grandparents were later looked back on with much fondness.

To spare the high maintenance costs at the station, an automated light atop a skeletal tower replaced Cedar Island Lighthouse in 1934, and Keeper Follett was reassigned to Long Beach Bar Lighthouse. Three years later, Cedar Island Lighthouse was put up for sale by the government and purchased by Phelan Beale for $2,002. Beales plans to turn the lighthouse into a hunting lodge for his nearby game preserve were never realized. Following the death of her husband, Edith Beale, who was an aunt of Jacqueline Kennedy Onassis, sold the lighthouse to Isabel Bradley for use as a vacation house.

John Parker worked for the Bradleys in 1965, when he was seventeen. Each morning he would run the Bradleys small outboard from Sag Harbor Yacht Club out to the lighthouse to see if Mrs. Bradley wanted to go ashore for shopping or if some supplies, like water, were needed. A boat was required to access the lighthouse as the adjoining landowner prohibited the Bradleys from crossing his property. The Bradleys contested this in court, claiming they had a right-of-way to the property. After the court ruled in favor of the Bradleys, John Parker walked in front of the couples new International Scout, cutting down small trees and clearing debris, as they made their first excursion to the lighthouse by land. Suffolk County purchased the property from the Bradelys in 1967 and incorporated it into Cedar Point County Park.

In 1974, the empty structure was badly damaged in a fire. The dwellings roof was replaced after the fire, but windows were simply bricked over, and the destroyed interior was left as is. Various local groups over the years talked about restoring the lighthouse, including the Sag Harbor Whaling and Historical Museum, the Suffolk County Historical Trust, and the Cedar Island Lighthouse Fund, among others, but disputes over the environmental impact of an access road to the lighthouse frustrated early restoration efforts.

A joint effort by Suffolk County Parks Department and the Long Island Chapter of the U.S. Lighthouse Society succeeded in placing Cedar Island Lighthouse on the National Register of Historic Places in 2002 and restoring the 1902 oil house in 2004. Though just a small step, the group has demonstrated its resolve to complete the long-term preservation of Cedar Island Lighthouse.

On October 31, 2013, the four-and-a-half-ton lantern room was hoisted off the lighthouse and barged to Sag Harbor Yacht Yard, where it will be restored. This work is the first phase in a planned restoration of Cedar Island Lighthouse, which one day may become a bed and breakfast.

In 2017, the Suffolk County Legislature approved $500,000 for the renovation of the lighthouses roof, exterior, and foundation pier by Lee H. Skolnick Architecture and Design Partnership.

Located on Cedar Point, at the end of a mile-and-a-half peninsula, found in Cedar Point County Park. The park is located roughly four miles northeast of Sag Harbor.
Latitude: 41.04077, Longitude: -72.26096

For a larger map of Cedar Island Lighthouse, click the lighthouse in the above map.

After entering the park, continue on the main road until you see the snack bar on your left. From the bluff behind the snack bar, you can see Cedar Island Lighthouse at the end of the peninsula. (It's a good idea to visually "spot" the lighthouse before hitting the hiking trail -- so you know where you are going!) The trail to the lighthouse starts a few hundred yards beyond the snack bar. The best route is along the beach on the wet sand and dried shells.