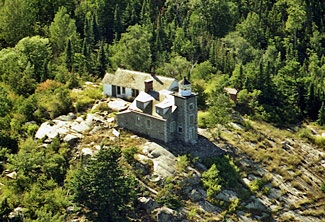 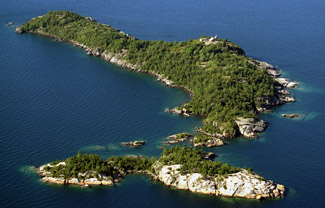 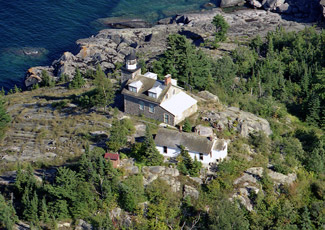 The Huron Islands are a group of eight small, rocky islands in Lake Superior, located roughly three miles offshore from the Upper Peninsula. In 1863, a committee was dispatched to the Great Lakes to determine the necessity of a few newly proposed lighthouses and the desirability of re-establishing discontinued lights. While examining these predetermined sites, the committee also noted the need for additional lights on Lake Superior to support the growing copper and iron ore trade of the Keweenaw Peninsula. One of these additional lights was recommended for the Huron Islands:

A light of good size on one of the Huron islands would render valuable service as a coast light. There is no light visible after losing Marquette until Portage river light heaves in sight. This light, however, is shut off by Huron islands, and the trend of the coast to one approaching it in this direction. The light is required as a general guide in both directions; for it is near this spot that the course changes, whether going west to Portage lake, or east to Marquette.

An example of how dangerous the islands could be was the wreck of the side-wheel steamer Arctic, which was carrying passengers and freight from Marquette to Portage Entry. Well aware of the islands, Captain Miller traveled at reduced speed in a dense fog in the early morning hours of May 29, 1860, until he and his mate felt they were beyond the islands. At this time, they altered course, only to run aground on one of the western islands. All the passengers and cattle made it safely ashore before the steamer sank, and the refugees were picked up two days later by the upbound steamer Fountain City. To this day, one of the Huron Islands is known as Cattle Island, for the cattle marooned there. The Arctics anchor is on display at a waterfront park in LAnse.

The Lighthouse Board requested funds for a lighthouse on the Huron Islands in 1865, noting that the islands were the site of numerous wrecks and a constant source of anxiety to navigators. Congress appropriated $17,000 for the lighthouse on July 28, 1866, and the westernmost island of the group, now known as Lighthouse Island, was selected as the site. As title to the island could not be perfected until September 1867, construction was postponed until the early spring of 1868.

A roadway was constructed from the islands shoreline to its 103-foot-summit by blasting away large quantities of rock and spanning chasms with wooden bridges, built using the small birch trees found on the island. The lighthouse was constructed on a leveled site atop the island using rough-cut granite blocks taken from the island, with cut limestone serving as quoins on the structures corners and as lintels above and below the doors and windows. Nearby Granite Island Lighthouse was built in parallel with Huron Island Lighthouse using the same plans and with granite taken from the Huron Islands.

Huron Island Lighthouses square tower stands nearly forty feet tall and is attached to the northern gable of the one-and-half-story keepers dwelling. A fixed, third-and-a-half-order Henry-Lepaute Fresnel lens was installed atop a cast-iron pedestal in the towers decagonal lantern to produce a white light with a focal plane of 198 feet that was first exhibited on October 20, 1868.

Abel Hall, the lights first keeper, came to the Upper Peninsula as part of the William Austin Burt and Douglas Houghton surveying party in the early 1840s and fell in love with the LAnse Bay area. The 1860 census lists Hall as a farmer with an Indian wife named Mary and four children: Wyatt, Charles, Frank, and Adelia. During most of his eleven years at Huron Island Lighthouse, Keeper Hall was assisted by his sons Charles and Frank.

Congress provided $2,000 on March 3, 1871 for building a proper road from the boat landing to the lighthouse. Part of this work included replacing the original wooden bridges with more substantial ones.

A ten-inch steam whistle was built on the northwest tip of Lighthouse Island in 1876 and sounded an eight-second blast each minute during periods of reduced visibility. A duplicate steam whistle was added for redundancy in 1881. To provide water for the whistles, a wall built using boulders and cement was placed across the mouth of a deep fissure in the rocky island in 1882 to form a basin, but during the next winter, the wall was demolished by sea and ice. A tramway for hauling supplies to the top of the cliff on which the fog signal buildings stood was also added in 1882, and in 1887, a house was built for a steam-hoisting engine used to facilitate the delivery of coal to the station.

While the lighthouse had an excellent view form its perch atop the island, the location also had its drawbacks. During the afternoon of June 27, 1890, the north corner of the dwelling was struck by lightning, which tore off the cornice and some shingles, and slightly damaged the side wall. Temporary repairs were made until a work crew, sent to the island the following month to rebuild the fog signals water supply, could provide a permanent fix.

When the tug Gillette delivered the keepers to Huron Island Lighthouse at the opening of the 1890 shipping season, they discovered that the No. 2 fog signal house had disappeared, and the No. 1 house was so baldy demoralized that it could not be of service to vesselmen for several weeks.

A brick oil house, with a roof, door, and shelving made of iron and a concrete floor, was erected on the island in 1896. In June 1898, the lighthouse tender Amaranth offloaded material and workmen on the island to construct a brick fog signal building, capable of holding two new boilers. One of the existing wooden fog signal building was disassembled and taken to Detroit while the other was converted into a storehouse.

After having served as an assistant keeper for a year at Raspberry Island Lighthouse, three years at Granite Island Lighthouse, and four years at Spectacle Reef Lighthouse, Frank Witte was finally promoted to head keeper in 1901, when he was placed in charge of Huron Island Lighthouse. After President Theodore Roosevelt designated the Huron Islands a national bird sanctuary in 1905 to protect large colonies of nesting herring gulls, Keeper Witte, known as Big Sneed, was appointed a warden to protect the birds. Several times Witte had to use a shotgun to run off Indians, who came to the islands to gather eggs.

On April 30, 1909, the schooner barge George C. Nester was in tow of the steam schooner Schoolcraft when the tow line parted during a ferocious storm. The helpless barge was driven onto the rocks of Lighthouse Island, just north of the fog signal. Keeper Witte, who suffered a broken collar bone and a sprained ankle trying to rescue the barges seven crew members, provided an account of the wreck:

It was such a storm as I have never seen equaled on the lakes. The spray dashed nearly 200 feet high.

It was nearing noon, when suddenly we heard the whistle of some vessel that seemed to be not over a hundred yards from the light.

My assistant, Caspar Cox [Kuhn], went with me in the direction of the sound and saw the barge rapidly drifting toward the worst part of the island. It seemed only an instant before she struck. Her bow was crushed in like an eggshell and then as the waves receded she swept back a moment. Then, with another wave the barge was hurled to pieces, and the sea was instantly filled with driving splinters.

I shall never forget the cries of the poor men in the crew. They called for a line, and I tried to give them help. But the line was like a feather in the gale and was blown upon the rocks time and time again. I could do nothing and the poor fellows drowned before my eyes.

I did all I could, but feel guilty of not saving one. I was only 50 feet above the sea and they were below me, clutching at the bare rocks.

Keeper Witte tried to enlist the help of the lighthouse tender Marigold that was riding out the storm in the lee of the island, but due to the high seas the tender could do nothing. Keeper Witte was taken to Marquette aboard the Marigold where the injuries he sustained from the ships wreckage hurled by the waves were treated. By June 5, 1909, Keeper Witte was back on Huron Island as on that date he found a body from the Nester floating in the lake near the north end of the island. Witte took the body to Skanee, the nearest town on the mainland, from where a description of the body was sent to the lighthouse inspector in Detroit.

In 1912, Keeper Witte was awarded a lighthouse efficiency pennant for having the model station in the district. Frank Witte retired as keeper of Huron Island Lighthouse in 1914 and became manager of a roadhouse on Detroit River owned by his good friend Wolfgang Feller.

The intensity of Huron Island Light was increased in October 1912 by changing the illuminant from oil to incandescent oil vapor. An air diaphone, sounded by oil-engine-driven compressors, replaced the steam whistle at the opening of navigation in 1928. The following year, a radiobeacon was established near the fog signal building as an additional aid for mariners navigating in thick weather.

In 1934, a frame dwelling was built near the lighthouse to provide additional space for the keepers, and generators were installed to electrify the main light and living quarters. The total cost of these improvements was $5,488. Dormers and indoor plumbing were added to the lighthouse in 1950, and in 1961, new quarters for the Coast Guard personnel were constructed near the brick fog signal building. Huron Island Lighthouse was manned through 1972, and since then an automated light has been exhibited from the station.

In 1997, Huron Island Lighthouse, which was placed on the National Register of Historic Places in 1975, was one of seventeen lighthouses excessed by the Coast Guard. Ownership of the lighthouse was transferred to the U.S. Fish and Wildlife Service, and Lighthouse Island is now part of Huron National Wildlife Refuge, which was established in 1905 as a breeding ground for birds.

In 1999, local citizens formed Huron Island Lighthouse Preservation Association to help save the lighthouse for future generations. After years of fundraising, the association succeeded in replacing the lighthouses roof during the summer of 2006.

Located on Lighthouse Island, the westernmost of the Huron Islands. The islands make up Huron Islands National Wildlife Refuge, and are located three miles off the south shore of Lake Superior and eighteen miles east of Keweenaw Peninsula.
Latitude: 46.963311, Longitude: -87.998725

For a larger map of Huron Island Lighthouse, click the lighthouse in the above map.

West Huron Island (Lighthouse Island) is open to the public during daylight hours and must be reached by private boat. The third-and-a-half-order Henry-Lepaute Fresnel lens used in the lighthouse is on display at Marquette Maritime Museum.

The lighthouse is owned by the U.S. Fish and Wildlife Service and is part of the Huron National Wildlife Refuge. Grounds open, dwelling/tower closed.