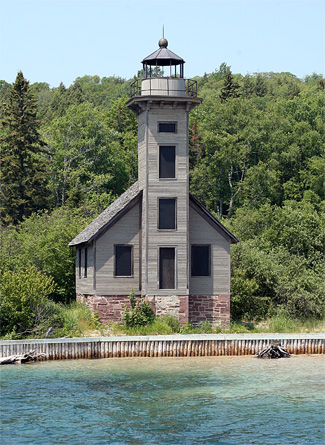 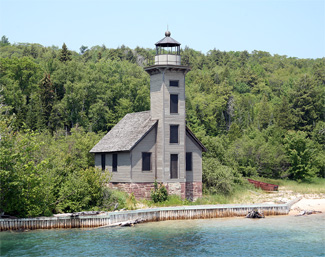 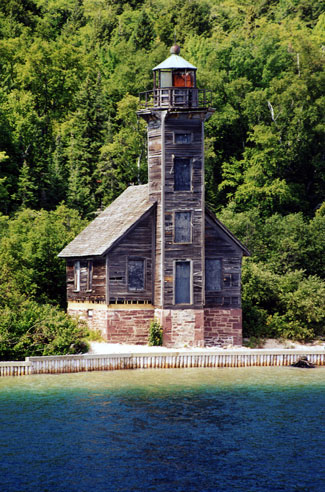 A lighthouse commenced operation on the northern tip of Grand Island in 1856, but mariners needed additional navigational aids to help them reach the safe anchorages at the southern end of the island. On February 27, 1860, Senator Zachariah Chandler presented a petition of masters, pilots, owners of vessels, and others navigating Lake Superior to Congress praying for the erection of two light-houses upon the entrance to Grand Island bay and harbor, and four months later, Congress appropriated $6,000 for the erection of one or two beacon lights.

In 1863, a committee charged with visiting sites on the Great Lakes and reporting on the necessity of new lights issued the following report on Grand Island:

There is, at present, a light on the northern extremity of Grand island, which is simply a coast light, and suited to serve the general purpose of navigating the southern shore of the lake.

The question before us now is, whether lights shall be established for local purposes, and especially for the purpose of bringing the harbor of refuge at the bottom of the bay into convenient use. It will be very easy to satisfy the board that not only one but three lights should be erected in this vicinity.

There are two harbors at the bottom of the bay, well sheltered and affording good anchorage for vessels of all size. One of them is on the south side of Grand island, and the other is opposite, on the main land.

There are fine entrances both on the east and west side [of the island], but both of these entrances must be lighted to make them secure.

The eastern entrance is bounded by the eastern lobe of Grand Island, known as the Thumb, and the mainlands Sand Point, from which shoals extend for several hundred feet. The committee recommended that a light be placed either on the extremity of Sand Point shoal, (in which case it would be a screw pile [lighthouse],) or on the southeast point of the Thumb.

The $6,000 appropriation in 1860 for beacon lights to mark the harbor was deemed insufficient, but the committee used the following statement to drive home the need for the lights: There is no other harbor of refuge on this bare, rocky, and inhospitable coast from White Fish point to Copper harbor, a distance of about one hundred and fifty miles direct, and one hundred and eighty miles by the coast, with the exception of Marquette, which harbor enjoys a natural protection from northwest and north storms only, and is open to northeast storms. To this is to be added that this reach of coast between White Fish point and Copper harbor is a lee shore to the worst storms of this tempestuous climate, throughout the greater part of its extent.

Congress provided another $10,000 for the lights on July 28, 1866, and after consulting with shipmasters acquainted with the harbor, the Lighthouse Board decided to place the light for the eastern entrance on the Thumb.

Work on Grand Island Harbor Light was to be performed in 1867 by a work party engaged at Gull Rock Lighthouse, but the drowning of William Tunbridge, the foreman in charge of the men, forced the start of the work at Grand Island to be postponed until 1868. During the summer of 1868, a wooden lighthouse, consisting of a square tower attached to the gable end of a one-and-a-half-story keepers dwelling, was built atop a stone foundation on the Thumb. The structures fixed white light had a focal plane of forty-nine feet above the lake and was first exhibited on August 15, 1868. A steamers lens was initially employed in the towers lantern room, but this was upgraded to a fifth-order lens in 1869.

On August 15, 1891, the Grand Island Harbor Lighthouse, known locally as Grand Island East Channel Light, was struck by lightning, which caused damage to the tower and dwelling. The original pier for accessing the lighthouse was replaced in 1898 by a fifty-foot-long, eight-foot-wide pier that had a depth of six feet of water at its outer end.

Storms in 1898 so eroded the shore on the Thumb that plans were made to move the lighthouse 200 feet back from the lake. These plans must have been reconsidered, as the following year an eight-by-twenty-four-foot crib was built in front of the lighthouse, and the intervening space was filled in. A second crib was placed east of the lighthouse along with roughly 100 feet of brush and stone to protect the beach.

George Prior began his lightkeeping career on Stannard Rock in 1883 as an assistant to his brother James. When James Prior was transferred to Duluth in 1888, George was promoted to head keeper and served in that capacity until 1893, when he was transferred to Grand Island Harbor Lighthouse. George and Theresa Prior had three children when they moved to Grand Island, and another two were born on the island. During storms, the Priors so feared that the lighthouse might pitch over into the lake that the whole family would stay dressed and awake all night in case they had to flee inland.

On October 24, 1903, the 252-foot wooden steamer Manhattan, while sailing from Duluth to Buffalo, sought shelter from northerly gales in Grand Island Harbor. After the weather moderated the following day, the Manhattan raised her anchor and headed into the East Channel. When abreast of the lighthouse, the steamers steering chain broke, and the vessel ran aground on a rocky reef. The force of the collision toppled an oil lamp, starting a fire that burned the Manhattan to its waterline. Keeper Prior was reportedly the first to reach the wreck and provide assistance. Known for helping any vessel in distress, Keeper Prior once saved the lives of nine people from a boat that foundered in a terrible storm.

In 1905, the Lighthouse Board announced that Grand Island Harbor Light no longer served the purpose for which it was originally built as mariners using the East Channel were unable to see the light until they were close to it and a shipwreck lay just north of the narrowest part of the channel. Since the old wooden lighthouse was also difficult and expensive to maintain, the Board requested $13,200 for a pair of range lights on the mainland that would be visible at a greater distance and more accurately mark the channel. The Board repeated its request for funds the following year, when it was also forced to rebuild 100 feet of shoreline protection in front of the lighthouse and add another 360 feet of protection to the north.

Congress provided $15,000 for range lights at Munising on March 4, 1907, and two metal towers and a keepers dwelling were erected the following year. Grand Island Harbor Lighthouse was lit for the last time on the night of October 29, 1908, and the following evening Keeper George Prior, who was transferred to the new station, exhibited the fixed-red range lights at Munising for the first time.

In 1913, the forty-four-acre lighthouse reservation was sold to twenty members of the Munising Moose Lodge, each of whom controlled one-twentieth of the abandoned lighthouse. Over the years, shares in the lighthouse were combined and exchanged hands, but little was done to preserve the structure. In the 1990s, The Munising News wrote, It is anyones guess what will bring the East Channel Lighthouse down first, the rotting timbers, or the lakes erosion. Both problems need to be addressed very soon, or there may not be a building to save. Finally, in 1999, the Alger County Historical Society formed the East Channel Lighthouse Rescue Committee to try to save the building from neglect and erosion. The committees goal wasnt to restore the lighthouse to the period when it was staffed and painted white, but rather to stabilize it and maintain its now cherished rustic appearance.

The committee raised $4,000 by selling raffle tickets for a drawing, which had a hand-made lighthouse quilt as one of its three prizes, and the American Lighthouse Foundation wrote a check for $5,000, after matching $2,500 it had received in donations for the lighthouse. During the summer of 2000, around 600 ten-foot-long cedar posts were transported to Grand Island and then driven into the sand in front of the lighthouse. Volunteers also collected over 150 tons of rocks to fill wire cages that were placed behind the posts to complete the shore protection.

Work on the lighthouse itself commenced in the summer of 2002, when the building was gently lifted off its stone foundation, one side at a time, so the rotted timber sill and floor joists could be replaced. The exterior walls were then reinforced and attached to the new structural members to strengthen the buildings core. During the summer of 2003, the lantern room was disassembled so the deck and catwalk could be rebuilt. Students at Northern Michigan University in Marquette restored the lantern room, which was placed back atop the tower in 2004, proudly showing off its new copper roof. New cedar siding was installed rough side out on three sides of the lighthouse in 2005 and aged with weathered gray stain. The structure still displays its original siding on the entire northeast side. Thanks to a generous and devoted community, East Channel Lighthouse now stands ready to face the twenty-first century.

For a larger map of Grand Island East Channel Lighthouse, click the lighthouse in the above map.

Shipwreck Tours, Riptide Ride , and Pictured Rocks Cruises offer tours that pass closely by Grand Island East Channel Lighthouse. A ferry to and tour of Grand Island are available, however, the tour does not pass by either of the lighthouses on Grand Island, which stand on private property and are not accessible.