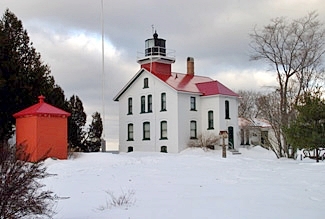 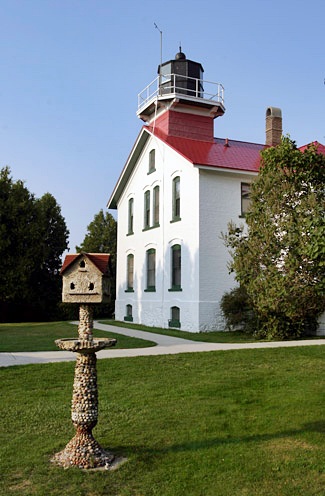 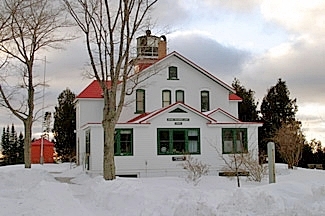 Michigans Lower Peninsula is thought by many to resemble a hand. The peninsula between Saginaw Bay and Lake Huron is often referred to as Michigans thumb, while thirty-mile-long Leelanau Peninsula, located between Lake Michigan and Grand Traverse Bay is occasionally known as the states little finger. On September 28, 1850, Congress appropriated $4,000 for a lighthouse on the northern tip of Leelanau Peninsula. President Millard Fillmore signed an executive order on June 30, 1851, reserving 58.75 acres of public land for Grand Traverse Lighthouse, which was also known early on as Cat Head Lighthouse due to its proximity to Cat Head Point.

Construction at the site began in late 1851, with materials being transported by schooner to the point and then being lightered ashore. A two-room dwelling with an attached kitchen and shed was built for the keeper, a position first held by David Moon, and a thirty-foot-tall, conical, brick tower was erected nearby. A fixed light, produced by six lamps and fourteen-inch reflectors, was first exhibited in September 1852, but in 1857, the light source was changed to a fourth-order Fresnel lens.

Keeper Moon resigned after just one year at the lighthouse and was replaced by Philo Beers, who had previously been a Deputy United States Marshal. During Moons four years as keeper, the lighthouse was visited by pirates from nearby Beaver Island. James Strang had established himself as king of a Mormon splinter group on the island, and his followers were accused of night-time raids on the Michigan mainland. The pirates made off with all of Keeper Beers nets and their contents on one occasion and valuable lighthouse supplies on another.

Shortly after being placed in service, Grand Traverse Lighthouse was found to be poorly built and poorly situated. Located near the eastern side of the tip of the peninsula, the lighthouse was useful for vessels entering and leaving Grand Traverse Bay but wasnt of much service to vessels on Lake Michigan. The original lighthouse was torn down and replaced in 1858 by a two-and-a-half-story dwelling, built using Milwaukee cream city brick and topped by a slate roof. The dwelling measured thirty by thirty-two feet, and one of its gable ends was adorned with a seven-foot-square wooden tower. A fifth-order Fresnel lens was used in the new lighthouse until 1870, when a fourth-order, Barbier and Finestre lens was installed. The Lighthouse Board called this upgrade a very necessary and decided improvement.

Philo Beers was no longer serving as keeper when the new lighthouse was built, but he and his son Henry, who would serve as keeper of the lighthouse from 1859 to 1861, used some of the material from the original keepers dwelling to build a house in nearby Northport.

In 1880, a new wood shed was built, and the dwellings cellar was drained and sealed with cement. A two-story barn was built near the lighthouse in 1891 with a pitched shingle roof. The barn received an addition in 1895, and in 1896 a brick oil house was constructed.

The Lighthouse Board noted in its annual report for 1895 that a fog signal at Grand Traverse Lighthouse was deemed necessary to navigation and requested $5,500 for its construction. Congress allocated the funds on July 1, 1898, and contracts were let for the project on January 20, 1899. A substantial structure, built of buff, pressed brick and topped by red, metal tiles, was completed in November 1899 on the shore roughly 140 feet southwest of the lighthouse. Duplicate ten-inch steam whistles, provided by George F. Motter & Sons of York, Pennsylvania under a contract with Ellicott Company of Baltimore, Maryland, were installed in the fog signal building and placed in operation on December 20, 1899. To provide a constant supply of water for the signal, a well was sunk twenty feet west of the building.

The extra workload created by the steam whistle required the assignment of an assistant keeper to the station, and in 1900, brick extensions were added to the dwelling to create two separate apartments for the keepers.

In 1933, an air diaphone, powered by air compressors driven by diesel engines, replaced the steam whistle. The most active year for the steam fog signal for which there are records was 1904, when it was in operation some 318 hours and consumed about 49 cords of wood.

The light was electrified in 1950, increasing its intensity to 15,000 candlepower. Keepers remained at Grand Traverse Lighthouse until 1972, when the lighthouse was replaced by an automated beacon mounted atop a skeletal tower.

The abandoned buildings slowly fell into disrepair until an organization, now known as Grand Traverse Lighthouse Museum, was formed in 1984 with the goal of restoring the station and opening it to the public. After raccoons, squirrels, and bats had been evicted from the lighthouse, half of the structure was opened in 1986, while the rest housed a caretaker. A fourth-order Fresnel lens, formerly used at Michigans Alpena Lighthouse, is on exhibit in the lighthouse mounted atop the original pedestal from Grand Traverse Lighthouse.

Born at Poverty Island Lighthouse, Doug McCormick moved to the lighthouse in 1923 at the age of eight, when his father, James McCormick, transferred to Grand Traverse from South Fox Island. Doug lived in the lighthouse until 1935, when he enlisted in the Coast Guard, but after his father retired in 1938, he did not see the lighthouse again until he moved to Traverse City in 1984. Doug McCormick helped with renovations at the lighthouse, and then from 1990 to 2002, he lived in his childhood home, serving as caretaker of the museum and sharing memories with visitors. During his childhood, Doug played along the shoreline during the summer and skated on the frozen waters surrounding the station in the winter. As he grew older, he helped his father polish the lens and trim the lamps wick to keep the light burning brightly.

Doug was able to track down a potbellied stove used in the lighthouse, and brought back his mothers pump organ and dining room table.

Keeper James McCormick was responsible for much of the beach stonework found on the lighthouse grounds, including a stone birdhouse, a stone crown planter, and stone steps. Bette McCormick Olli, one of John and Mary McCormicks twelve children, wrote a pamphlet on life at the lighthouse entitled, The Way It Was, which includes the following:

Ma would sometimes make rag dolls for us with button eyes and bodies filled with sand. The sand would shift and the dolls felt as though they were alive. Store bought dolls were mostly for looking at and not to be handled carelessly.

In September 2003, ownership of Grand Traverse Lighthouse was transferred from the Coast Guard to Michigan Department of Parks and Recreation.

Instituted in 2004, a keeper program now allows lighthouse lovers to stay in the assistant keepers quarters in the north side of the lighthouse for week-long stints while greeting visitors and providing historical information about the station.

Located in Leelanau State Park at the northern tip of the Leelanau Peninsula, marking the entrance to Grand Traverse Bay from Lake Michigan.
Latitude: 45.2102, Longitude: -85.54996

For a larger map of Grand Traverse Lighthouse, click the lighthouse in the above map.

Follow Highway 22 up either side of the peninsula towards Northport. From Highway 22, take Highway 201 through Northport. At the northern end of Northport, the road will become County Road 640 and then County Road 629, which will lead you to Leelanau State Park, where you will find Grand Traverse Lighthouse.

A state park entry fee is required to visit the lighthouse. Hours of operation can be found on the Grand Traverse Lighthouse website. For more information, call (231) 386-7195.

The lighthouse is owned by Michigan Department of Natural Resources and managed by Grand Traverse Lighthouse Museum. Grounds open, dwelling/tower open in season.