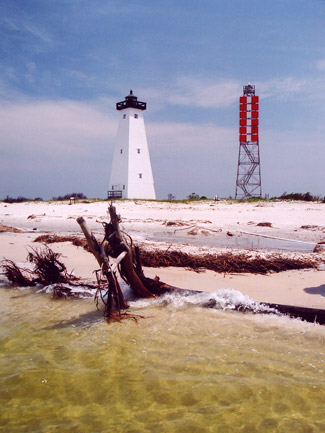 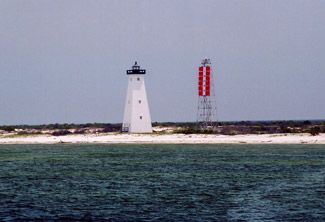 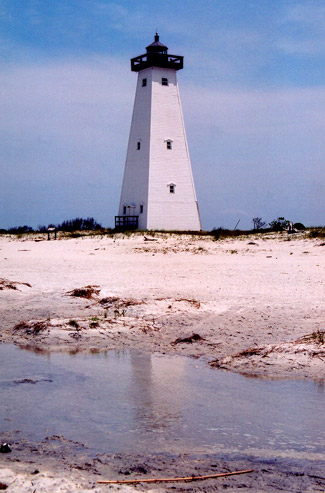 With the only deep-water harbor between Mobile Bay and the Mississippi River, Ship Island was used by early explorers as a base for further explorations along the Gulf Coast. The fact that large vessels could find anchorage there led to its name  Isle des Vasseaux or Ship Island. Even with its fine harbor, it was still several years after the United States gained control of the region that a lighthouse was finally proposed for the island. Part of Jefferson Davis platform during his successful campaign for the U.S. House of Representatives in 1844 was the establishment of lighthouses and fortifications along Mississippis coastline. In 1847, Davis was appointed to the U.S. Senate, and the following year $12,000 was allocated for a lighthouse at Ship Island.

Although funds were available in 1848, a Spanish land grant on Ship Island delayed the start of construction on the lighthouse until 1853. A forty-five-foot brick tower was completed by November of that year, and it was lit for the first time on Christmas Day by Keeper Edward Havens. The lantern room originally housed a set of eleven lamps and reflectors, but was upgraded to a fourth-order Fresnel lens in 1856. Havens served as keeper until his accidental death eighteen months later. Mary Havens succeeded her husband as keeper and served until her death sixteen months later.

After Jefferson Davis was appointed Secretary of War in 1853, he succeeded at convincing Congress and President Pierce to build a fort on Ship Island. Construction began in 1859, but due to storms and an outbreak of yellow fever, only eight feet of the outer walls were completed in two years of work. On January 13, 1861, four days after Mississippi seceded from the United States, the incomplete fort was taken over by Confederate forces, who built up the fort with timbers and sand bags.

In July 1861, Union forces aboard the USS Massachusetts approached the island. A brief exchange of cannon fire ensued, until the Massachusetts retreated. The Confederates declared the skirmish a victory, but by September of that year, they had left the island. The Fresnel lens was removed from the tower, boxed up, and taken away with them. The last remaining Confederate soldiers on the island packed the base of the tower with flammable material and set it ablaze.

A large force of Union soldiers occupied the island shortly thereafter, and work continued on the fort, which they named Fort Massachusetts after their flagship. This certainly was not the use that Jefferson Davis, now President of the Confederate States, envisioned for the fort. Restoration work soon began on the charred lighthouse. A mast from a seized Confederate schooner was used as the newel for a new circular staircase, and a captured fourth-order Fresnel lens and the old lantern room from the Bayou St. John Lighthouse, found in a Confederate warehouse on Lake Pontchartrain, were used to complete the tower. The light was reactivated on November 14, 1862 and served throughout the remainder of the Civil War.

Daniel McCall began his lighthouse career as an assistant at Ship Island in 1875. McCall had worked for a railroad in New Orleans following the Civil War and lost his right leg at the hip in a train accident. In 1877, McCall was promoted to Head Keeper and served in that capacity until 1899. With his one good leg, McCall would regularly make the trip up the circular stairway and then continue up the iron ladder into the lantern room to care for the light.

During McCalls tenure, the lights characteristic was changed from fixed white to fixed red on July 1, 1878, and in 1886 the old brick lighthouse and dwelling were condemned as unsafe. A replacement square, open-frame wooden lighthouse topped with a lantern room was built 300 feet from the brick tower, and after the lens and pedestal had been transferred from the old tower, the new light was exhibited on September 28, 1886. Three months later, the tower was enclosed, sheathed inside and weatherboarded outside. A second order oil house was added to the station in 1892.

After the original tower finally collapsed, its bricks were used in 1901 to build a small jetty between the old tower and the shore to curb erosion. In 1904, some 930 tons of rock ballast were placed along the beach to provide additional protection to the station.

On June 3, 1929, the sixty-two-foot-tall tower was struck by lightning during an electrical storm. The lighthouse was equipped with a lightning conductor, consisting of a one-and-a-half-inch-thick copper ribbon that led from the top of the tower to a cement-filled sewer pipe buried in the ground, and it is believed that this prevented extensive damage to the tower. A few weatherboards were knocked off each of the lighthouses four sides, about midway up the tower, and two panes of plate glass in the lantern room were broken. Keeper Thomas Clarisse and his wife were in the dwelling, not more than twenty feet away from the tower, and though the dwelling was not injured, its occupants were greatly startled.

The lighthouse was electrified in 1930 through the installation of a kerosene electric generator and a storage battery. The Coast Guard employed keepers at the lighthouse until 1949, when the station was automated and the keepers dwelling was dismantled and moved to Biloxi. In March 1957, the towers light was relocated to the Gulfport Channel Outer Range Rear Light.

On August 17, 1969, devastating Hurricane Camille struck the Mississippi Gulf Coast. With winds in excess of 200 miles per hour, Camille cut the island in two, creating West and East Ship Island. The hurricane damaged the lighthouse, and Duvic, whose mainland home was lost in the hurricane, decided not to repair the structure. A modern steel skeleton tower was built next to the wooden tower in 1971.

A group of citizens, known as Friends of Gulf Islands National Seashore, was formed in 1998, and one of their first projects was to rebuild the lighthouse. The U.S. Forest Service provided the massive sixty-four-foot-long and twelve-inch-wide corner beams, along with other lumber needed for the project. In February 1999, the U.S. Navy SeaBees built the framework for the replica lighthouse on a pier in Gulfport, then barged it to the island and over the next several months completed the tower on the foundation of the 1886 lighthouse. A Coast Guard helicopter lifted a lantern room on the seventy-two-foot-tall replica in February 2000. The lighthouse replica stood until 2005, when Hurricane Katrina destroyed the tower along with a few other historic lighthouses of the Gulf Coast.

Today, Ship Island can easily be visited via ferry from Gulfport. The fourth-order Fresnel lens used in Ship Island Lighthouse was given to Biloxi in 1958 and eventually placed on display at the Maritime and Seafood Industry Museum. The museum was heavily damaged by Hurricane Katrina in 2005 as was the lens. All the pieces of the lens were recovered, crated up, and shipped to St. Augustine Lighthouse, where the lens was repaired. The lens was returned to the museum in April 2010.

In 2011, a replica of Ship Island Lighthouse was built at Gulfport Marina by Simpkins & Costelli, Inc.

For a larger map of Ship Island Lighthouse, click the lighthouse in the above map.

Ship Island Excursions offers ferry service from Gulfport, Mississippi to Ship Island, where the lighthouse and replica formerly stood. Ferry service is available March through October, weather permitting. The ferry dock is located on the Mississippi Sound side of the island near Fort Massachusetts. The site of the lighthouse can be reached by walking 0.3 miles east along the beach from the dock. Tours of the fort are offered by the park service, and a boardwalk leads 1/3 of a mile across the island to the Gulf, where a swimming beach is located.

The fourth-order Fresnel lens from the lighthouse was displayed at the Maritime and Seafood Industry Museum in Biloxi, but the museum and lens were heavily damaged by Hurricane Katrina in 2005. The lens was repaired and returned to the museum in 2010.

The skeletal tower is owned by the Coast Guard. Grounds open, tower closed.


I highly recommend a stop at the Maritime and Seafood Industry Museum in Biloxi to see the fourth-order Fresnel lens from the Ship Island Lighthouse. The museum has a small theater where you can watch a video on Hurricane Camille, said to be the worst storm to strike the U.S. mainland. The video was very interesting and told of a group that held a hurricane party as the storm approached. A rescue worker advised them to evacuate, and when they insisted on remaining, he asked for contact information for their next of kin. The information was unfortunately needed, as several of the partying crowd perished in the storm. Amazingly, from what I have gathered, the Biloxi Lighthouse survived the storm quite well. The museum also has several other interesting displays including an automatic shrimp peeler.