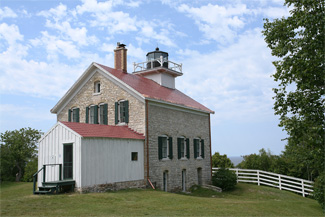 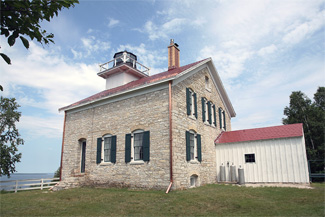 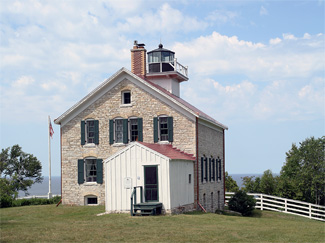 Rock Island Passage, bounded by Rock Island on the south and St. Martin Island on the north, is the widest passage connecting Green Bay and Lake Michigan. In 1832, thirty Detroit merchants, masters, and owners of vessels petitioned Congress for a light to mark the southern side of Rock Island Passage claiming, There is no point on the Northern Lakes, where in the opinion of your Memorialists, a light house is more imperiously required than this. Congress appropriated $5,000 for the lighthouse on June 30, 1834, and to this another $3,000 was added the following year. Michael Dousman signed a contract on April 2, 1836, agreeing to complete a tower and dwelling on the northern end of Rock Island within six months. The conical tower was to be built of stone or brick laid in good lime, have a height of thirty feet, and be topped by an eight-sided, cast-iron lantern resting on a soapstone deck and surrounded by an iron railing. The keepers dwelling was to be built of the same material and measure thirty-four by twenty feet, with an attached fourteen by twelve foot kitchen. Besides the main floor, the dwelling also had a cellar and two chambers in the upper half-story.

After a site was cleared atop the 137-foot bluff, rock was quarried a short distance to the south for use in the tower and dwelling. The tower, which tapered from a diameter of eighteen feet at its base to nine feet at its deck, was built thirty feet north of the dwelling. John Scott of Detroit was paid $474 to supply and install a light, based on the Winslow Patent and consisting of eleven lamps backed by fourteen-inch reflectors. On October 20, 1837, over a year after the lighthouse was to have been completed, Joseph Hobbs certified to the collector of customs at Mackinac that the material of which the lighthouse and dwelling are made, are of the best quality and that the work is done in a substantive and workmanlike manner.

David E. Corbin, a veteran of the War of 1812 and a former fur trapper, was appointed first keeper of the light on December 19, 1837. In 1840, Keeper Corbin complained that plaster was falling off the dwelling, and an inspection report two years later noted that the buildings were very badly constructed, the mortar used not having the proper mixture of lime, permitting the water to ooze through it such as to keep the tower generally very damp.

An inspector in 1845 reported that Corbin was faithfully fulfilling his duties, but that being a bachelor, he was a bit lonely with his only companions being his faithful dog and Jock, his horse. Corbin was granted a twenty-day leave of absence on the condition that he return to the station with a wife. When the inspector visited the following year, he found that Corbin had been unsuccessful in his pursuit of a mate and seemed to be doomed to solitude during another dreary winter.

The 1850 census reveals that Corbin finally succeeded in convincing a woman to come live with him on Rock Island. In fact, the lighthouse was perhaps too crowded as besides the keeper, its occupants included Catharine Storce, her three children, and a nineteen-year-old laborer named William Kingsley. Corbin fell sick in 1852 and passed away that December at the lighthouse that he had diligently kept for fifteen years. Rather than remove his body from the island for burial elsewhere, he was interred in a small cemetery just south of the lighthouse.

In 1858, a construction crew arrived on Rock Island to replace the earlier structures that were badly deteriorated. A basement was blasted out of the limestone cliff, and using local stone, a new two-story dwelling was built with a square wooden tower situated atop its northern gable. The tower was topped by a nine-sided lantern, which housed a fixed, fourth-order Fresnel lens that beamed forth its light at a focal plane of 159 feet.

William Betts, a Civil War veteran, was appointed keeper of Pottawatomie Lighthouse on March 22, 1870. Seventeen months later, the thirty-eight-year-old bachelor married sixteen-year-old Emily Rohn, daughter of Victor Rohn the keeper of nearby Pilot Island Lighthouse. An assistant keeper had been assigned to Rock Island starting in 1866, and when James Fuller resigned that position, Emily became her husbands assistant. This move let the family occupy the entire lighthouse, space they would soon need, as the first of William and Emilys nine children arrived in 1874.

Keepers Betts recorded important happenings such as storms and shipwrecks in the stations logbook. On January 20, 1876, Betts noted that two men attempting to row to the mainland from Washington Island never arrived after a terrible storm came up shortly after their departure. Betts felt the men had been carried out into Lake Michigan in the ice, and a subsequent entry made on May 3, 1876, confirms his suspicion was correct:

The two men who were lost last January have been seen several times once from Caney [Cana] Lt. House and once from Jacksonport. The men were apparently frozen stiff and sitting upright in the boat among a mass of ice  At last account they were still adrift. There is not much hope now that they will be found and buried.

The Bettses would school their children at the lighthouse during the summer, but when the station was closed in the winter, the family would migrate to nearby Washington Island, where the children could attend public school.

Pottawatomie Light was converted from lard-oil to kerosene in 1880. For safety reasons, this more volatile fuel was typically kept in an oil house a short distance from the lighthouse, but due to a lack of funds, Rock Islands brick oil house was not built until 1904.

As a result of budget cuts, several stations, including Pottawatomie, lost their assistant keepers in September of 1882. This action had a severe impact on the Bettses as it reduced their annual salary from $960 to just $560. Keeper Betts attempted to make ends meet on a salary less than what he could earn at common labor, but in 1886, after sixteen years at the lighthouse, he decided to resign his position and devote his energy to his farm on Washington Island. His logbook entry for May 11, 1886 reads, I am glad to get away from here for I am as tired of this business as I can be.

A telephone cable was laid to Pottawattomie Lighthouse in 1903. While the keepers enjoyed this modern convenience, they still had to haul some of their water by pail from Lake Michigan. In 1879, steps had been constructed leading down the bluff adjacent to the station to a new landing platform. This meant the keeper didnt have to walk over a mile to the landing at the southern end of the island for water, but procuring drinking water was still an arduous task. Finally, in 1909, a well was drilled near the lighthouse to provide a convenient water source.

On September 6, 1916, the steamer Peter Reiss, bound for Green Bay with a load of coal, ran aground on St. Martins Reef near the entrance to the bay. Keeper Edward Cornell and John Fitzgerald, his assistant, notified the Coast Guard and delivered messages to the stranded steamer. A tug and lighter were sent to remove some of the coal from the steamer so it could be freed from reef. As a result of the damage, the Peter Reiss had to spend two weeks in dry docks for repairs.

Ernest Lockhart was one of the last keeper of Pottawatomie Lighthouse, serving until 1946, when wet-cell batteries were put in place to power the light and the dwelling was closed. The batteries were replaced by solar panels in 1986, and two years later the Coast Guard installed a steel skeleton tower near the lighthouse to display the light.

Friends of Rock Island (FORI) State Park began working toward the restoration of Pottawatomie Lighthouse in 1994, and five years later, they succeeded in having a new lantern room installed atop the dwelling to replace the original one that had been removed by the Coast Guard. Tony Hodges, owner of Poverty Island, then a marine contracting company, just happened to visit Rock Island in 1997 and learn of the plan to restore the lighthouse. After contacting Tim Sweet, president of FORI, Hodges was given a contract to design and build the new lantern room.

After installing the lantern room, FORI raised funds to have a headstone, inscribed with an image of the original Pottawatomie Lighthouse, placed on Keeper David Corbins grave near the lighthouse in 2003. The following year, the lighthouse, restored to resemble the early 1900s, was dedicated on May 17 as the Pottawatomie Lighthouse Museum. In 2004, volunteer docents began living in the lighthouse for week-long stints from Memorial Day to Columbus Day while providing free tours to the public. To complete the restoration of the lighthouse, a replica fourth-order Fresnel lens was installed in the lantern room in May 2005.

In the 1880s, the Door County Advocate carried a report on an outing to visit the keeper on Rock Island by some young people from Washington Island. The party had brought baskets which were packed with the choicest viands, to which all did justice. It was one of the most agreeable days that has ever been spent on the island. Visitors to Pottawatomie Lighthouse today likewise find it an enjoyable and memorable destination for a day trip.

Located on the northwestern end of Rock Island State Park, which is off the northern tip of the Door Peninsula.
Latitude: 45.42757, Longitude: -86.82813

For a larger map of Pottawatomie (Rock Island) Lighthouse, click the lighthouse in the above map.

The lighthouse is owned by the Wisconsin Department of Natural Resources. Grounds open, dwelling/tower open in season.


Between 1910 and 1912 Chester Thordarson bought up all the land parcels on Rock Island except that reserved for the lighthouse. Born in Iceland in 1867, Thordarson immigrated to Milwaukee with his parents in 1873 and two decades later started the Thordarson Electric Company. Among Thordarsons numerous inventions was the first half-million volt transformer, which won him a gold medal at the St. Louis Worlds Fair.

With his vast fortune, Thordarson had workmen begin construction in 1928 of a stone boathouse and great hall near the southwest tip of Rock Island. Thordarsons impressive Rock Island estate included several cabins, a pagoda, and an impressive garden and was used to entertain notoriety including the mayor of Chicago, Thomas Edison, and Henry Ford. After Thordarson passed away in 1945, nature started to slowly reclaim the estate, and his heirs decided to sell the island to the State of Wisconsin in 1964. A stone cabin and the impressive boathouse and great hall are the main remnants of the estate today.