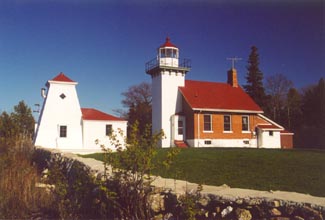 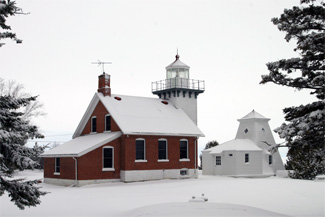 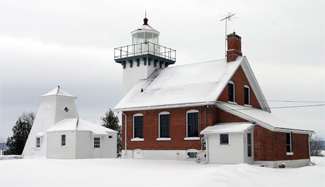 Sherwood Point Lighthouse, located near Idlewild in Door County, Wisconsin was officially established in 1883, after a two-year battle over title to the site. Situated on the west side of the north entrance to Sturgeon Bay, the point is named for Peter Sherwood, who settled there in 1836.

The Sturgeon Bay and Lake Michigan Ship Canal and Harbor Company was formed in the early 1870s to create a canal between Sturgeon Bay and Lake Michigan, in the hopes of reducing the length of the shipping route into Green Bay. As the city of Sturgeon Bay began to grow in the 1870s as both a port and commercial center, it became increasingly clear that a lighthouse was needed to illuminate the mouth of the bay, especially since the canal was nearing completion and the closest lighthouse was fourteen miles to the north. The Lighthouse Board agreed to build a lighthouse if the Canal and Harbor Company obtained title to an appropriate site. Sherwood Point, with its thirty-foot limestone bluff, was a logical location for a lighthouse and was selected as the site in 1880.

The struggle to obtain the title to the property began in 1881, when Congress approved a $12,000 project to begin construction of Sherwood Point Lighthouse. The original owner of the site, Peter Sherwood, died in 1867 and left the property to his wife, Clarissa Sherwood. Though Mr. Sherwood had sold off pieces of the land to a variety of individuals, Elias Haines was eventually named as owner of the site, though no official deed could be procured. When no sale agreement could be reached with Mr. Haines, the Sturgeon Bay and Lake Michigan Ship Canal and Harbor Company had the land condemned under legislation by the State of Wisconsin.

The Sturgeon Bay and Lake Michigan Ship Canal and Harbor Company purchased the site for $125 and quickly turned over the title to the Federal Government in hopes of expediting the construction process. Once the lighthouse authorities allowed construction to commence, the lighthouse tender Warrington arrived with the initial building materials, including bricks from Detroit, which were red instead of the usual cream-colored Milwaukee brick that had been used in other lighthouses in the area.

Construction crews soon cleared the designated land and blasted rock to create a cellar and provide material to construct a strong foundation. The light tower and the one-and-a-half-story living quarters were built next, complete with a ten-sided, cast-iron lantern room at the top of the tower.

Lighthouse keeper Henry Stanley and his wife Katherine were officially transferred to Sherwood Point on September 20, 1883. Stanley had previously served as keeper of Eagle Bluff Lighthouse for fifteen years.

The fourth-order Fresnel lens, which was manufactured in France, was official displayed by Stanley for the first time on October 10, 1883. In clear weather, the light was visible for fourteen miles. Sherwood Point displayed a fixed white light with an alternating red flash every minute. Stanley had to make sure the exact timing of the clockworks and light functioned properly, a task that would be riddled with problems during Stanleys tenure as keeper. The main issue with the light was when the clockworks malfunctioned, causing the red flash panels to stop rotating.

Stanley kept a detailed log of his work at the lighthouse, writing down everything from mechanical and timing problems with the lighting apparatus to the large amounts of visitors he received throughout the year. One such visitor, Stanleys twenty-one-year-old niece Minnie Hesh, would prove to be a great asset to the Stanleys as well as the lighthouse. Minnie came to live with her aunt and uncle in 1884 after her parents died.

Minnie helped her uncle with all aspects of running the lighthouse, and even wrote many of the log entries. In August 1889, a wedding was held near the station for Minnie and William Cochems, a Sturgeon Bay local who would later become assistant keeper to Stanley and eventually the second principal keeper at Sherwood Point.

The Lighthouse Board installed a fog signal at Sherwood Point in 1892, since the red and white lights were barely visible in thick weather. Instead of installing a siren or horn, which would have been expensive, a bell, which was struck by a mechanical hammer every twelve seconds, was installed on a small wooden tower in front of the lighthouse.

After his hardware store failed during the Panic of 1893, William Cochems was hired by Keeper Stanley as a laborer at Sherwood Point Lighthouse. In May 1895, Cochems was promoted to assistant keeper when Stanley fell ill, and he became keeper in October of the same year after Stanley passed away. Katherine Stanley was appointed assistant keeper, mostly because this was the closest option to a pension plan for her. She had spent a great deal of her life sick, and routinely spent winters with friends in Sturgeon Bay and summers at Sherwood Point up until her retirement in 1898.

The erratic behavior of the light and the day-to-day routine of the keeper proved to be the same for Cochems as it was for Stanley. William Cochems and Minnie, who replaced her aunt as assistant keeper, worked hard to maintain the buildings and grounds of the site, which now included several gardens. The Cochems also continued to battle the ongoing problems of the lantern mechanics, up until 1898 when the old lens was discarded in favor of a lens formerly used at Passage Island Lighthouse that was equipped with a modern ball bearing apparatus. The only real difference between the two keepers was that Cochems and his wife, who did not suffer the same health problems as Katherine Stanley, were able to stay at Sherwood Point year round.

William Cochems retired on July 1, 1933 at the age of sixty-seven. Minnie Hesh Cochems had died of a heart attack five years earlier at the lighthouse, after serving as assistant keeper for thirty years. William Cochems had spent his entire lightkeeping career, almost thirty-nine years, at Sherwood Point. Upon his death in 1953, he was buried next to his wife in Bayside Cemetery in Sturgeon Bay

Modern technology began to impact Sherwood Point in the early 1930s. The lighthouse was updated thanks to the installation of electricity and running water, luxuries not available to many of the lighthouses of the area. Sherwood Point also became the only lighthouse in the county to be equipped with a radio broadcasting station, which was housed in an addition made to the fog bell tower. Starting on November 23, 1937, Keeper Stram would broadcast a weather report twice daily from Sherwood Point Lightstation, WWOC. Using the radio, Stram also maintained contact with Milwaukee Breakwater Lighthouse and the lighthouse tender Hollyhock.

In 1935, a steel tower equipped with a light and a fog signal commenced operation on Peshtigo Reef, ten miles northwest of Sherwood Point. The fog signal at Peshtigo Reef Lighthouse was controlled remotely from Sherwood Point, and each week Stram had to make a trip out to check on the light.

In 1938, Stram, a dedicated and hardworking keeper just like his predecessors, was the recipient of the Efficiency Flag, the highest award bestowed upon a keeper. He also won the Commandants Efficiency Star, awarded by the U.S. Coast Guard in 1940. The Coast Guard absorbed the Lighthouse Bureau in 1939, making Stram the last civilian keeper of the site. He entered the Coast Guard in 1941 and continued as keeper until his retirement in 1945.

Sherwood Point Lighthouse was the last manned lighthouse on the Great Lakes, not becoming automated until 1983, one hundred years after its initial construction. Today, a light still shines from the lighthouse, but a lighted buoy has replaced the stations radiobeacon and fog signals. The buoy marks Sherwood Point Reef, located about a mile northwest of the station. The coastguard continues to maintain the lighthouse and grounds.

For a larger map of Sherwood Point Lighthouse, click the lighthouse in the above map.

From Highway 42 south of Sturgeon Bay, take Idlewild Road/County Road M north for just over seven miles, and then turn left onto Sherwood Point Road. Sherwood Point Lighthouse is located at the end of the road. The lighthouse is used as a vacation spot for the Coast Guard, and the grounds are only open to the public during the annual Lighthouse Festival.

A distant view of the lighthouse can be had by taking a cruise aboard the Fred A. Busse Fireboat. The boat departs daily during the summer from a pier behind the Door County Maritime Museum in Sturgeon Bay. Tickets can be purchased in the museum. The fourth-order Fresnel lens used in Sherwood Point Lighthouse was removed in 2002 and is now on display at the Door County Maritime Museum.

The lighthouse is owned by the Coast Guard. Grounds typically open during the Lighthouse Festival.