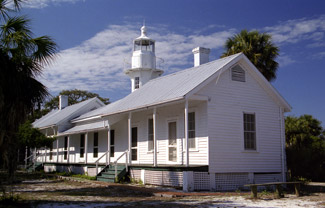 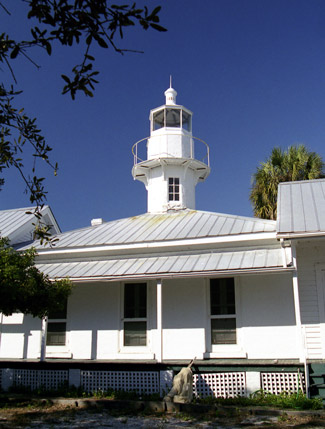 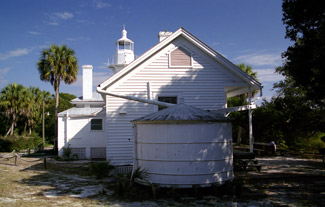 Each of the fifty states has an official state song, however most U.S. residents would be hard pressed to recognize their own states song, even if it were sung for them. Such is not the case for the state song of Florida, Old Folks at Home, written by Stephen Foster, who ironically never stepped foot in the state. The songs famous first line, Way down upon the Swanee River, refers to the Suwannee River that empties into the Gulf of Mexico along a sparsely populated section of the Floridian coast, fifty miles southwest of Gainesville. Just south of the entrance to the Suwannee River is found a group of low-lying islands known as the Cedar Keys. The individual islands have colorful names like Rattlesnake Key, Grassy Key, Deadmans Key, and Seahorse Key (named so because its contour resembles a seahorse), but the name for the collection of islands stems from the stands of Cedar trees formerly found thereon. During the Second Seminole Indian War (1835  1842), the U.S. military occupied the Cedar Keys. A supply depot and hospital were established on Atsena Otie Key, while Seahorse Key was used as a detention camp for Indians being relocated to the West. During this conflict, General Zachary Taylor requested that the Cedar Keys be reserved for military purposes. The outer key (Seahorse Key) of the group the Government should retain, he wrote, as on it will no doubt be erected, at some future time, a lighthouse for the benefit of vessels trading to the Suwanee River.

Taylor had the authority to make his prophecy come to pass as he was elected President of the United Sates in 1849, however, he died after just over a year in office. In September 1850, two months following the death of President Taylor, his prophecy was fulfilled, when Congress appropriated $8,000 for the erection of Seahorse Key Lighthouse. Taylors successor, Millard Fillmore issued an executive order on September 2, 1851, officially reserving Seahorse Key for lighthouse purposes. The following year, an additional $4,000 was earmarked for the lighthouse.

In January 1854, the Lighthouse Board approved plans submitted by George Meade for the construction of the lighthouse. Materials and a crew arrived on the island by the end of March, and William Wilson, the lighthouses first keeper, lit the wicks in the towers fourth-order Fresnel lens for the first time on August 1, 1854. The lights characteristic was fixed white, punctuated by a flash every minute.

The lighthouse consisted of a seventy-foot-square dwelling with a hipped roof, through the center of which a spiral staircase led upward to the lantern room. Perched atop The Mound, an elevated section of land that served as the islands spine, Cedar Keys Lighthouse had a focal plane of seventy-five feet, which made the light visible for fifteen miles. The mound itself rose fifty-two feet above the sea, reportedly making it the highest point on Floridas west coast.

Equipped with a lighthouse, the Cedar Keys area soon started to attract commercial enterprises. With his eye on using the areas plentiful cedar trees for the manufacturing of pencils, Eberhard Faber purchased large tracts of land around Cedar Keys in 1855. A pencil mill was established on Atsena Otie Key, which appropriately means Cedar Island in the Creek Indian language. During its peak in the 1880s, the mill employed roughly one hundred people, paying a top salary of around $3 per day.

David Levy Yulee, Floridas first senator, was instrumental in establishing a railroad line that linked Fernandina on the states east coast to Cedar Keys. Construction began in 1853 and reached Cedar Keys in 1860. The newly completed railroad was considered Floridas finest. However, service and life in general, was interrupted the following year when the Civil War broke out.

Cedar Keys Lighthouse was extinguished at the onset of the war, and in January 1862, Union forces aboard the USS Hatteras blockaded the keys, ruined the port and rail terminus at Cedar Key, and destroyed all structures of military value at Seahorse Key. Following the war, the lighthouse was returned to service on August 23, 1866, after having been overhauled and repaired. That same year, William Wilson, the first keeper of the light who had served just under a year, was buried on the island.

Cedar Keys returned to prosperity following the war, with its economy being driven by sawmills, pencil factories, and the fishing industry. However, after a couple of decades of unchecked consumption, the areas natural resources were becoming depleted. The majority of the cedar trees had been harvested, and the supply of shellfish was nearly exhausted. Up to this time, Cedar Keys had been the largest port along this section of the Floridian Coast, but around 1890 a railroad was built to Tampa, and business started to literally go south. To top it off, a hurricane struck Cedar Keys in 1896 destroying many of the mills and factories.

During this brief period of prosperity, the lighthouse was regularly overhauled and repaired. The lighthouse was whitewashed in 1880 and all of its woodwork repainted. The gallery surrounding the lighthouse, which had been damaged by lightening, was repaired in 1882, and then rebuilt in 1886. A brick oil house, measuring six by ten feet and built with eight-inch-thick walls and a slate roof, was completed in 1891. Sometime between 1903 and 1905, large additions were added to the east and west sides of the lighthouse to provide housing for a new Navy wireless telegraph station.

The Charleston earthquake was felt at the station at 9:31 p.m. on August 31, 1886. The following report, contributed by Keeper Andrew D. Hobday, appeared in the Annual Report of the Lighthouse Board for 1886.

The perceptible motion continued about two minutes. It was preceded by an unusual noise, similar to the humming of light machinery in rapid motion. There were two shocks felt, with an interval of about one minute between the shocks. The first was a jar, accompanied by a tremor of two seconds duration. The second was that of a horizontal undulatory movement in a direction from east to west, and of about two minutes duration. The shocks were moderate.

Due to the collapse of the local industry, fewer and fewer vessels called at Cedar Keys. Charles H. Gardner extinguished the light for the final time in 1915, after having served as its keeper for the previous eight years. At the time, Keeper Gardner was minding the light on Seahorse Key along with Turning Point Light, and on August 23, 1914, he had rescued an apparently insane man from a drifting boat.

In 1929, President Herbert Hoover created the Cedar Key National Wildlife Refuge by reserving three of the keys as a bird sanctuary. Seahorse Key was under the control of the U.S. Department of Agricultures Bureau of Biological Survey until by Executive Order 7484 it was made part of the refuge on November 6, 1936. In 1997, Atsena Otie Key was sold to the Suwannee River Water Management District which entered into a Memorandum of Understanding with the U.S. Fish and Wildlife Service to have the island managed as part of the Cedar Keys refuge.

On July 5, 2019, Cedar Keys Lighthouse was reactivated after having been dark for more than a century. Using a grant of approximately $50,000 from the Florida Historical Board, Artworks Florida was contracted to build a replica of the fourth-order Fresnel lens originally used in the lighthouse. Two flash panels revolve around the exterior of the lens to produce a fixed/flashing characteristic like the light had when it was an aid to navigation.

For a larger map of Cedar Keys (Seahorse Key) Lighthouse, click the lighthouse in the above map.

Seahorse Key can be reached by boat from Cedar Key. The lighthouse is open to the public during open houses typically held in July and during the third weekend in October (which coincides with the annual seafood festival in Cedar Key). Tidewater Tours offers transportation to the island during the open house and at other times. Landing on Seahorse Key is not permitted from March 1st to July 1st due to bird nesting.

The lighthouse is owned by the U.S. Fish & Wildlife Service and managed by University of Florida Marine Laboratory. Grounds/dwelling/tower open during open house.