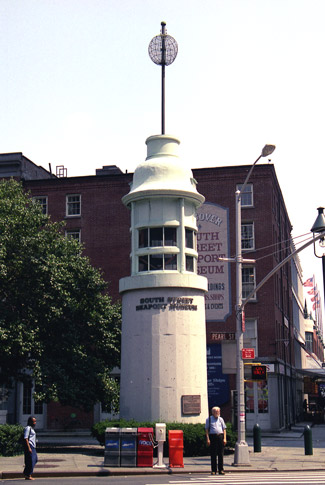 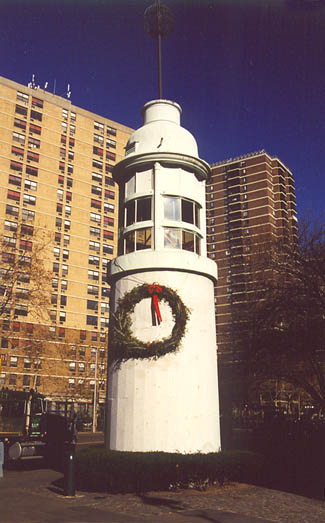 On April 15, 1913, one year after the sinking of the Titanic, the Titanic Memorial Lighthouse and Time Ball, mounted atop the Seamens Church Institute, were dedicated to honor the passengers, officers, and crew who perished in the tragedy. The dedicatory service opened with a hymn and prayer, and then Rt. Rev. David H. Greer, Bishop of New York, read the following lines of dedication:

To the glory of Almighty God, and in loving memory of those passengers, officers, and crew who lost their lives in the foundering of the steamship Titanic, on April 15, 1912, I, David Hummell Greer, Bishop of New York, and President of the Seamens Church Institute of New York, do solemnly dedicate the Titanic Memorial Lighthouse Tower. As its light by night shall guide pilgrims and seafaring men from every clime into this port, so may they follow Him who is the Light of Life across the waves of this troublesome world to everlasting life; and, looking at noon toward this place to note the time of day, may they remember that our days pass as the swift ships, and in view of the shortness and uncertainty of human life, strive to fulfill their duty well, as the beat preparation for Eternity. Amen.

The Titanic Memorial Lighthouse exhibited a fixed green light that could be seen throughout New York Harbor and down as far as Sandy Hook. Five minutes before noon each day, a time ball would be hoisted to the top of a steel rod mounted atop the lighthouse and dropped at the stroke of twelve as indicated over the wires from Washington, D.C. According to The Lookout, the magazine of the Seamens Church Institute, the Titanic Memorial Lighthouse would be a much-needed daily reminder, for in a busy, careless city the average person so soon forgets.

The Seamens Church Institute was established in 1834 and had announced plans for its new twelve-story headquarters at South Street and Coenties Slip in Lower Manhattan several years before the loss of the Titanic. The Flemish-style building was meant to reflect New Yorks Dutch origins and was to be crowned by a tower whose beacon would welcome incoming seaman. The cornerstone for the building was laid one day after the sinking of the Titanic, and a week later the institute announced the lighthouse atop their building would be a memorial to the victims of the tragedy.

In 1965, the institute put their building, which contained several transient rooms for mariners, up for sale and moved to a smaller edifice. The company contracted to demolish the old building donated the Titanic Memorial Lighthouse to the South Street Seaport Museum, and the tower was placed in its current location in 1976.

The plaque on the Titanic Memorial Lighthouse reads:

This lighthouse is a memorial to the passengers, officers and crew who died as heroes when the steamship Titanic sank after collision with an iceberg.

This lighthouse was originally erected by public subscription. In 1913, it stood above the East River on the roof of the old Seamens Church Institute at the corner of South Street and Coenties Slip. From 1913 to 1967 the time ball at the top of the lighthouse would drop down the pole to signal twelve noon to the ships in the harbor. This time ball mechanism was activated by a telegraphic signal from the National Observatory in Washington, D.C.

In July 1968 the Seamans Church Institute moved to its present quarters at 15 State Street. That year the Titanic Memorial Lighthouse was donated by the Kaiser-Nelson Steel & Salvage Corporation to the South Street Seaport Museum. It was erected on this corner at the entrance to the museum complex in May 1976 with funds provided by the Exxon Corporation.

For a larger map of Titanic Memorial Lighthouse, click the lighthouse in the above map.