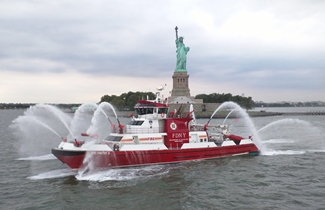 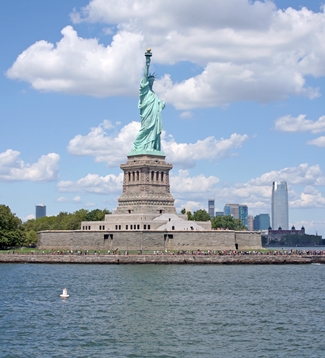 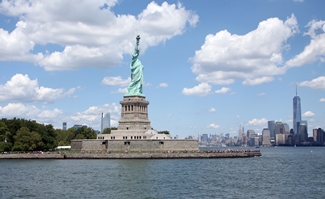 Everyone is familiar with the Statue of Liberty as a symbol of the promise of America, but few are probably aware that, for a few years early in its existence, it was also officially a lighthouse operated under the authority of the Lighthouse Board. The lighted torch in Lady Libertys right hand had, and still has, great symbolic significance, but at its beginning, it was also used as a navigational aid for ships entering New York Harbor. On November 16, 1886, President Grover Cleveland ordered that the Statue of Liberty be at once placed under the care and superintendence of the Light-House Board and that it be from henceforth maintained by said Board as a beacon. The statue stood on twelve-acre Bedloe Island, which was divided into three jurisdictions:

As the monument was readied for its public opening, a lighting apparatus had yet to be installed in the torch  it remains unclear whether Frederic Bartholdi, the statues French-born designer, had ever outlined any specific plan for how the statue would be illuminated. Electric lights, then a fairly new invention, were the popular choice. The chief engineer for the lighting project, although not an electrician himself, advocated placing electric lights around the statues feet, aiming upwards to flood the statue with light at night  an innovative concept at the time. He also proposed lights in the torch shining straight up into the clouds and around the entire horizon as well through two rows of circular windows made in the copper flame.

The dedication of the Statue of Liberty on October 28, 1886 was marked with great fireworks displays and New Yorks first ever Ticker Tape parade, but the equally anticipated debut of the statues electric lighting turned out to be an anticlimax, marked with weeks of false starts, confusion, and grappling with the new technology. The first time the statues lights were turned on, their angle was miscalculated, and instead of majestically bathing the statue in light, they cast a shadow that left the statues head and shoulders in the dark.

All through the ongoing lighting crisis, the New York World gave a daily, blow-by-blow account of the problems, sparing no ones feelings in the process. The lighting system, designed by James J. Wood of the American Electric Manufacturing Company, used arc lights powered by a dynamo. The system was widely praised for its simplicity and effectiveness. The American Electric Manufacturing Company had donated the dynamo and other lighting equipment to the statue as a patriotic gesture, since Congress had so far failed to approve any funding for the lights, but they had only agreed to operate and maintain the lights for one week.

The statue was first illuminated at 7:35 p.m. on November 1, 1886, and when one week from the dedication was up, frantic government officials pleaded for the lights to be left on for one more night so that Frederic Bartholdi, designer of the statue, could view the lighting. The sculptor was impressed and reacted favorably. On November 7, 1886, the statue went dark for two weeks. The World reported, The torch of the Goddess of Liberty is suffering from an attack of red tape. The Lighthouse Board worked behind the scenes to secure emergency funding and crew, and President Cleveland finally gave the executive order that authorized the Board to continue the lighting.

The Statue of Liberty became operational as a lighthouse on November 22, 1886. The American Electric Manufacturing Company continued to maintain the light for a short time, but shortly after Christmas, Albert E. Littlefield was named the stations keeper. Because he had specialized knowledge of electricity, Littlefield received an annual salary of $1,000, which was several hundred dollars more than most head lighthouse keepers received at the time. Littlefield, his family, and his assistant keepers and their families all lived in a three-story post hospital on the northwest corner of the island. The Statue of Libertys torch, 305 feet above sea level, contained nine electric arc lamps that could be seen twenty-four miles out to sea.

The following account of the lighting of the statue appeared in the Annual Report of the Lighthouse Board for 1892:

When the statue of Liberty Enlightening the World" was erected on Bedloes Island, New York Harbor, it was found that no provision had been made to show a light, except possibly through the windows forming the diadem.

The statue consists of an iron skeleton covered with a copper skin and stands on a granite pedestal in the center of Fort Wood.

In the daytime it is a most commanding figure, as it is of colossal size, the combined height of pedestal and statue being 305 feet.

At night it would be invisible unless illuminated by artificial means. The very name of the statue almost imperatively demanded that it should exhibit a light, and as the right hand carries a torch from which flares an immense copper flame, the most natural thing to do was to make the flame luminous.

Various methods were proposed; one was to place electric lights on the balcony surrounding the flame, which, by reflectors, would throw their light on the flame, while the direct light would be screened from the eye of the observer. This might have answered fairly well had the flame been gilded, but one serious objection was that these outside lamps would be exposed to all weathers.

On September 28, 1886, Lieut. John Millis, Corps of Engineers, U. S. Army, was directed to report to Maj. Gen. J. M. Schofield, to assist in the preparation of a suitable plan. On October 11, he submitted a project, which, in brief, was as follows: I copy from his report: The plan proposed contemplates exhibiting a powerful electric light from the torch to be visible around the entire horizon, and such an arrangement of lamps and reflectors at the salients of the fort as to throw light directly on the statue and pedestal, besides the necessary illumination of the interior of the statue and pedestal and the engine and boiler rooms.

In order that the light placed inside the torch should be seen, it was necessary to provide openings, so two rows of circular windows, like port lights of a vessel, were made in the copper flame. This plan was approved and was so promptly carried into effect that everything was in readiness for the inauguration ceremonies which took place on November 1, 1886.

The Lighthouse Board was apparently not especially pleased with the assignment  but not because of the statues imposing size; the engineering challenges of building lighthouses in inaccessible places that could withstand the worst of the elements was routine to the lighthouse establishment. The problem was that they never considered the Statue of Liberty to be important as a navigational aid. As of 1889, it wasnt even listed as one of New Yorks harbor lights. Maintenance costs for the beacon were about $10,000 a year, and came out of the Boards lighthouse budget. Congress was solicited for special funding for the statue to no avail.

In 1892, the lighting of the statue was modified as described in the following Notice to Mariners:

Notice is hereby given that, on or about October 21, 1892, the following changes will be made in the lights and illumination of the Statue of Liberty Enlightening the World, inside Fort Wood, Bedloes Island, New York Bay, New York.

In addition to the light now shown from the torch there will be a vertical beam of red and yellow light seen only by reflection from the haze or dust in the air.

The face and bust of the statue will be illuminated by a powerful search light from one of the salients of the fort.

The coronet will be decorated with red, white, and blue incandescent electric lights.

The pedestal will continue to be illuminated, as heretofore, by arc lamps within the salients, and not visible outside the fort.

To achieve the new method of lighting the flame, a glazed, horizontal belt of plate glass replaced the circular windows, and a skylight, glazed with red, white, and yellow glass, was placed in the top of the flame. A single lamp was then used in the flame with mirrors positioned to direct a portion of the light horizontally and the rest vertically. The different colors of glass in the skylight produced a light that resembled a flame.

The expense of running the lights was reduced in 1898 through the substitution of a ten-horsepower oil engine for the Armington Sims steam engine that powered the electric plant.

As late as 1901, even though the statue had been open to the public for fifteen years, visitor approaches were incomplete and three of the four entrances to the statue were boarded up. The one serviceable entrance was an unpainted wooden stairway, and the steps leading to the crown were lit dimly by kerosene lanterns. The only toilet for visitors on the entire grounds was a single, small shed that hung over the seawall. A cistern on the grounds caved in, leaving a hazardous hole. Post Commander A.C. Taylor wrote: When it is remembered that hundreds of visitors climb these dark narrow stairs daily and breathe the suffocating, nauseating air, it is remarkable that so few casualties occur  it is strange that so many people risk their lives by climbing to its head.

In late 1901, the War Department asked the Lighthouse Board to release its jurisdiction over the statue, which it gladly did. On March 1, 1902, the Statue of Liberty was discontinued as an aid to navigation, and the services of Albert E. Littlefield, the lights first and only head keeper, were no longer needed. According to the 1900 census, fifty-six-year-old Keeper Littlefield and his wife Lucy had four children, ranging in age from eighteen to eight, living with them on the island at that time. Albert was a machinist working in Maine before being placed in charge of lighting the Statute of Liberty, and when the light was discontinued he continued to work as a machinist in the Third Lighthouse District.

The War Department kept authority over the statue until 1932, when the National Park Service assumed control and over the years transformed the statue into the well-run tourist attraction that it is today.

For a larger map of Statue of Liberty Lighthouse, click the lighthouse in the above map.

boats to the Statue of Liberty National Monument depart from Battery Park in Lower Manhattan and from Liberty State Park in Jersey City. You can also view the statue for free from the Staten Island Ferry. The ferry departs from the Whitehall Terminal at Whitehall Street and South Street in Lower Manhattan and from the St. George Ferry Terminal at Richmond Terrace on Staten Island.

The "lighthouse" is owned by the National Park Service and is part of the Statue of Liberty National Monument. Grounds/tower open during tours.

Find the closest hotels to Statue of Liberty Lighthouse