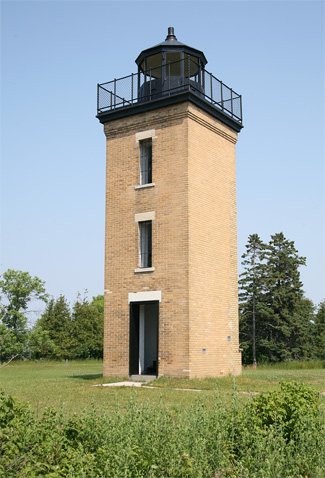 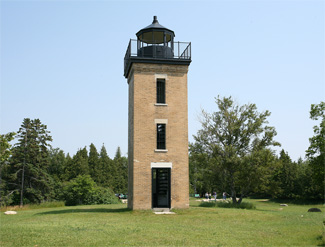 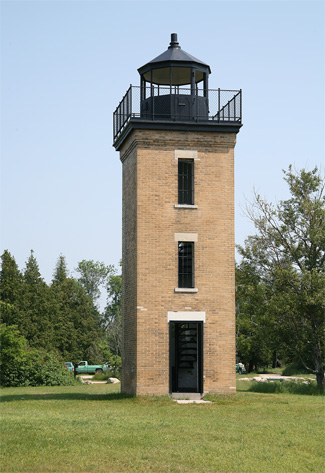 Stonington Peninsula stretches south in Lake Michigan from Michigans Upper Peninsula, helping form Little Bay de Noc on the west and Big Bay de Noc on the east. The bays are named after the Noquet, a group of Native Americans that lived in the area. Shaped like a funnel, the peninsula naturally collects monarch butterflies at its tip each fall where they rest before continuing south across Lake Michigan on their annual migration. Though it was likely their great-great-great-grandparents that made the lengthy journey down to Mexico the previous year, these butterflies instinctively know the route. A few monarchs tagged on the peninsula have been found in Mexico, helping document this amazing migration of nearly 2,000 miles.

With the growth of industry at the ports of Escanaba, Gladstone, Fayette, and Nahma in the nineteenth century, marking Stonington Peninsula with a lighthouse became a high priority. On April 21, 1856, George Washington Peck, a representative from Michigan, presented a petition to the House of Representatives from citizens of Milwaukee, praying for an appropriation for a light-house on Point Peninsula, between Big and Little Bay Du Noquet. Congress appropriated $5,000 for the lighthouse on August 18, 1856, but for some reason all but $727.94 of this amount reverted to the treasury in 1859.

The need for the lighthouse was revisited in 1864 when the Senates Committee on Commerce was instructed to inquire into the expediency of building a light-house on Point Peninsula, between Big and Little Bay du Noquet, in the State of Michigan, and of constructing a beacon light at Sand Point, on the west side of Little Bay du Noquet. The sum of $15,000 was allocated for Point Peninsula Lighthouse on July 2, 1864, and the following year a yellow brick lighthouse was built, consisting of a square, forty-foot-tall tower attached church style to a one-and-a-half-story, yellow-brick keepers dwelling.

A fourth-order Fresnel lens installed inside the towers decagonal lantern room produced a white flash every thirty seconds to guide mariners in the area, but they were warned about a dangerous shoal that extended one-and-a-half miles southward from the peninsula and of Eleven-Foot Shoal, located two-and-a-half miles southwest of the lighthouse.

After short stints of service by the first two keepers, Charles Beggs took charge of the station in 1867 and served until his death in 1887 after having suffered a profuse hemorrhage from the lungs in late 1885. An unsuccessful attempt was made to secure the position of keeper for Beggs widow Mary.

In 1868, the Lighthouse Board noted that the dwellings front wall was cracked and its cellar wet. These same issues were brought up again the following year and likely soon addressed. A bigger problem arose during the winter of 1885-86, when the stations landing dock was destroyed. The Lighthouse Board noted that new cribwork protection for landing and for protecting the boathouse would cost roughly $2,000, but only recommended the work be done if a new station was not going to be established on Eleven-Foot Shoal, allowing Point Peninsula Lighthouse to be discontinued. A sundry act passed March 2, 1889, appropriated $2,000 for the landing improvement, but in view of the probable establishment of a light on Eleven-Foot Shoal, the money was not spent, and the keeper was instead given an additional allowance to offset the lack of a landing.

After being built in Toledo, Ohio, wood-framed LV-60 was towed north and placed on Eleven-Foot Shoal on October 6, 1893. The vessel marked the shoal through the shipping season of 1925, and then was sold. The steel-hulled LV-82 was assigned to the station in 1926.

The placement of a lightship on Eleven-Foot Shoal did not lead to Point Peninsula Lighthouse being discontinued, and in 1898, the following improvements were made: a 100-foot-long trench was blasted out of the peninsula and sewer crock was laid to connect the dwellings plumbing to the beach, the old well was rebricked, and a new twenty-one-foot well was sunk. In 1901, metal handrails were added to the towers spiral staircase, and a brick outbuilding was enlarged and converted into an oil house.

After materials were landed in June 1902, the exterior of the lighthouse was resurfaced with pressed brick, and dormer windows were added to the dwelling. The old boathouse was also relocated to a site behind the lighthouse and converted into a barn.

Captain James Armstrong, the stations last keeper, was born in New York City in 1861, but his family moved to South Manitou Island on Lake Michigan when he was three. After a few years of experience as a sailor, James joined the Coast Guard at the age of twenty-one, but when his mother implored him to give up the hazardous work, he complied and accepted a position as second assistant keeper at South Manitou Lighthouse in 1885. James was promoted to first assistant in 1887, and then on October 1, 1889, he accepted a transfer to become head keeper at Point Peninsula.

When Captain Armstrong arrived on the peninsula there were no roads, so any travel from the station by land had to be made on horseback or by hiking on Indian trails. Keeper Armstrong often related that he had to use a wheelbarrow to bring his belongings to the lighthouse. Not used to the isolation, Keeper Armstrong attempted to secure a transfer, but after a few years, crude roads were established and Armstrongs wife and six children grew to like the area. As deep snow prevented students from reaching the peninsulas schoolhouse in the winter, the school session included the summer months.

On May 20, 1922, the illuminant used at Point Peninsula Lighthouse was changed from oil to acetylene, allowing the light to be unattended. The characteristic of the light was changed at this time to a one-second white flash every ten seconds. After nearly thirty-three years at Point Peninsula, Keeper Armstrong was appointed an additional keeper at nearby Escanaba Lighthouse on May 25, 1922, and then took charge of that station when its head keeper retired in 1925.

Minneapolis Shoal Lighthouse was established roughly seven miles southwest of Point Peninsula in 1936, and as most shipping now passed southward of this light, the lights at Point Peninsula and Eleven-Foot Shoal were discontinued that year.

Ownership of Point Peninsula Lighthouse and the surrounding forty-seven acres was transferred to the U.S. Forest Service on November 1, 1936, and the Civilian Conservation Corps subsequently repaired the stations buildings and built camping and picnic sites on the point. Given its isolation, the lighthouse became the target of vandals, and when the Forest Service could no longer finance repairs, it considered demolishing the structure in 1948. George A. Young, with the U.S. Forest Service, lamented the stated of the lighthouse: Each year the condition of the building becomes worse. The glass in the tower has been broken by rifle bullets. Because we have no money to maintain it, there is the possibility that the substructure of the building has become badly weakened. It would require an examination of the building to determine how much it would cost to make repairs  and we have no money for that purpose.

Fortunately, Stonington Grange, a local chapter of The National Grange of the Order of Patrons of Husbandry, stepped in to save the lighthouse. The Granges restoration efforts earned them first prize in the 1949 statewide Grange Community Service contest. During a pioneer day held on Peninsula Point in August 1949, one of the daughters of Keeper Armstrong shared some of the entries from the stations logbook that showed how hazardous the surrounding waters could be:

August 21, 1872: Schooner Pathfinder went aground on a reef off this light and was towed off by the Lighthouse Tender Haze, with no damage.

October 31, 1896: Two of the men was drowned from the 11 foot light ship about two miles west of the shoal. They was going to Escanaba with and for mail.

December 18, 1913: The old schooner Lucie Graham went on the point last night at 9 p.m. The next morning the keeper went aboard but found no one there. She went to pieces.

All the restoration work done by Stonington Grange was lost when the keepers quarters burned in 1959. The shell of the brick dwelling was later removed, leaving just the tower standing, but signs of the dwellings foundation can still be seen on the north side of the tower.

Visitors to the site can climb the tower for marvelous views of the surrounding waters and for an elevated vantage point for spotting migrating birds and butterflies.

For a larger map of Peninsula Point Lighthouse, click the lighthouse in the above map.

From Highway 2, 2.8 miles east of Rapid River, take the exit towards Stonington and travel south on County Road 513. Follow CR 513 for 17.7 miles to the tip of the peninsula, where you will find Peninsula Point Lighthouse. The last mile of the journey, which is a narrow, winding, dirt road, is not recommended for recreational vehicles or trailers over sixteen feet long or eight feet high.

The lighthouse is owned by the USDA-Forest Service and managed by Hiawatha National Forest. Grounds open, tower open.