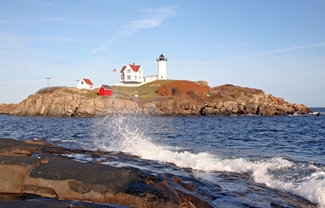 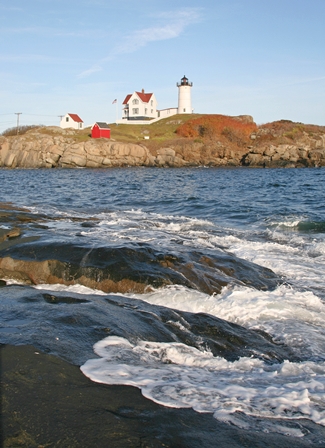 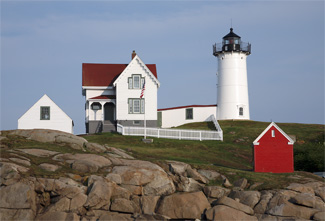 Cape Neddick Light, also known as Nubble Light and Cape Neck to locals, has always drawn hordes of tourists, and the lights early keepers were quick to cash in on the interest. Today an estimated half million people visit Sohier Park every year to gaze across the channel at the lighthouse. A digitized image of the lighthouse was even sent into space aboard Voyager II as part of the collection of materials designed to teach extraterrestrials about Earth. Nathaniel H. Otterson, the lights first keeper, blatantly courted the tourist trade with the help of his family. The Portsmouth Journal announced, Visitors are not allowed to visit the lighthouse at York Nubble between the hours of 6 P.M. and 10 A.M.; but at other times the son of the keeper will row you over and back in his boat for ten cents. Despite inflation and the dismissal of more than one keeper, the practice of ferrying sightseers continued for many years at the same ten-cent rate. In 1898, Keeper Brackett Lewis was prohibited from admitting visitors to the island on Sundays. Lewis said the restriction was because he was making too much money, but the more likely reason was that the throngs of visitors were interfering with his duties.

Keeper Otterson, who served until 1885, earned $500 annually, not counting his profits from the tourist trade. Leander White had been slated for the spot of first keeper at Cape Neddick but assigned to Whaleback Light instead. Simon Leighton was then given the nod, but an illness forced him to step aside. As keeper positions were political plums, the fact that Otterson was the cousin of New Hampshire Governor Natt Head probably clinched the position for him.

Keeper Brackett Lewis, who succeeded Otterson and served until 1904, was able to tune out the stations fog bell so well that he sometimes forgot to deactivate iteven though the 3,000-pound bell was so loud it could be heard six miles away by the keepers at Boon Island. William M. Brooks, keeper from 1904 to 1912, offered visitors fishing tackle and bait in addition to a five-cent tour of the station conducted by his wife. Success proved his undoing when his superiors wrote that there were 200 to 300 people at certain times to roam about the reservation with only the keepers wife to care for the government property.

In 1912, James Burke, with twenty-five years of lighthouse keeping experience, transferred to Cape Neddick. The Burke family kept a cow and chickens and supplemented their diet with local mussels, crab, lobster, fish, and duck. Appreciative of the keepers who kept them safe, lobstermen were known to toss a sack with lobsters onto the island while heading home. Burkes daughter Lucy later wrote that their six-room, gingerbread-trimmed home had a large parlor stove for heat, a living room, dining room, kitchen with pantry, and three bedrooms upstairs, but no bathroom. Sometimes flocks of birds would fly into the tower at night, and hundreds of dead ones would need to be raked up in the morning. After Burke retired in 1919, William Richardson took over and was subsequently fired for ferrying sightseers to the island.

Local mariners requested a lighthouse on the Nubble as early as 1807. Thirty years later, on March 3, 1837, Congress appropriated $5,000 for one, but Captain Joseph Smith, a former U.S. revenue cutter captain, knew the coast intimately and recommended against it, suggesting instead that an unlighted beacon be placed just offshore on York Ledge:

The water in every direction from this point [Cape Neddick] is bold, and there are three lights in view therefrom, furnishing a safe and easy guide to the mariner in approaching to, or departing from, the coast, in any direction; indeed an additional light here would obviously tend to embarrass rather than aid navigation generally, upon the coast.

The principal, and, indeed, the only object of a light at this place perceived by me, is to guide coasting vessels through an inshore passage between a dangerous shoal called York ledge, and Stones rock, near the main land. The ledge lies about three miles southeast from the main land, and about two miles from said rock, and between them there is a clear passage of deep water of about two miles in width. But when the fact is stated, that this passage is not generally used by coasters or other vessels, it may well be doubted whether the dangers and embarrassments to which the proposed light would subject the mariner, by leading him too near the coast, where, with the wind from the eastward, he would not at all times haul off, nor make by its guide, any accessible harbor, would be counterbalanced by the comparative small benefits to be derived from it.

Having thus stated my opinion against the expediency of a light-house upon York nubble, with the reasons for that opinion, I now most respectfully suggest for your consideration the propriety of the erection of a monument or beacon upon York ledge, as a substitute.

One of Cape Neddicks legends involves the Isidore. Before it sailed on what would be its last voyage, a sailor dreamt of seven coffins lined up on shore and heard a voice saying that one would be his. Another crewmember, Thomas King, dreamt of its wreck and hid in the brush until after she set sail. Seven bodies (including that of the prophetic seaman), washed ashore, followed by the captains leg. Some say the phantom ship with its crew can be seen sailing past the light.

The November 1842 wreck of the bark Isidore, north of the Nubble near Bald Head Cliff, pointed to the need for a lighthouse on the Nubble. Congress appropriated $5,000 on August 31, 1852 for a lighthouse on the Nubble or at nearby York Harbor, but the money was withdrawn after a coast survey found the light unnecessary. In 1874, the Lighthouse Board noted that the erection of a lighthouse at Cape Neddick would benefit the coasting trade and requested $15,000 for its construction. Plans for building a hotel on or near the island compounded the difficulties in buying the Nubble from its multiple owners and delayed its purchase (for $1,500) until February 1879.

The cast-iron sections of the forty-one-foot, conical tower erected on the Nubble were manufactured in Portland and then transported to the site aboard the USS Myrtle in April 1879. For stability and insulation, the interior of the tower was lined with red brick . A thirty-two-step cast-iron spiral stairway leads to the watchroom, from where a ships ladder provides access to the lantern room. The gallery railing sports miniature lighthouse finials, a rare detail. Cape Neddicks fourth-order fixed red light was first exhibited on July 1, 1879.

The tower was white early on, but was then painted reddish brown, a color it sported until being painted white again on September 1, 1899.

A boathouse and boat-slip were built on in the island in 1888, and ten years later, the station was connected to the village of York Beach by telephone using an appropriation for national defense. The stations bright red oil house was added in 1902. In 1928, after an explosion damaged its fourth-order Fresnel lens, a duplicate was brought from another station. The original kerosene oil vapor lamp was used until the station was electrified in 1938.

The station was originally equipped with a fog bell suspended within a skeletal, A-frame tower. In 1890, the frame was strengthened, and a striking machine, removed from Pond Island, was rebuilt and set up at Cape Neddick. At that time, the bell was changed from an inside to an outside striker, and its characteristic was altered from one blow every thirty seconds to one blow every fifteen seconds. The frame tower was replaced in 1911 by an enclosed pyramidal tower, which remained on the island until 1961.

One of the islands most famous residents was a brawny, twenty-pound tomcat called Sambo Tonkus or Mr. T. Seeing how attached the cat was to the light, his first keeper-owner left him at the station. After the cat had eaten all the mice on the island, Eugene Coleman, keeper from 1930 to 1946, was shocked to see the tom paddle to the mainland one day and return with a fat mouse. The ginger-striped cat was a favorite with visitors and was written up in local newspapers for his swimming ability.

Coast Guard Keeper Russ Ahlgren said living at Neddick with camera-happy tourists 100 yards away was like living in a fish bowl looking out at the rest of the world. Everything his family needed had to be carried across the rocks on the mainland and put into a basket that was suspended from a line that ran to the island. The keeper would then row his family over to the island and reel in the basket carrying food, drink, and personal items. There was a catchment system for water, but bottled water was used for drinking. The basket is our mainstay, Russ said. The local police or fire department will put food or whatever we need in the basket if we cant get off.

Back in 1967, coastguardsman David Winchester found a unique use for the basket or trolley that became well known through an AP photograph that was carried in newspapers all over the country. In the photograph, the Winchesters seven-year-old son Rickie was shown in his knit hat being trundled off to school in the basket over the waves, with his father behind him working the pulleys. Coast Guard superiors were horrified and quickly set the rule that no families with school age children would ever be stationed on the Nubble again.

The dangerous ledges at Cape Neddick Lighthouse posed a challenge for parents of young children. Some are known to have regularly tied their little ones to a post or the lighthouse ladder until they were old enough to safely roam the island on their own.

When the light was automated in 1987, historian William O. Thomson remarked: Its the biggest issue in our little town. I cant remember people getting so upset about anything since World War II broke out. The townsfolk banded together and ultimately adopted the station in 1998 under the Maine Lights Program. The town was deluged with applications from people wanting to become live-in caretakers, but water and sewer issues have prevented anyone from moving in.

A big draw to Cape Neddick is the annual Lighting of the Nubble, where the buildings on the island are adorned with Christmas lights starting in late November. The festive display in 2010 was interrupted by a blizzard on December 26 that caused the lines carrying power to the island to arc. The lighthouse beacon automatically switched to a backup battery system, but it went out two days later due to an issue with its bulb-exchange mechanism. The Coast Guard and the Town of York worked together to address the islands power delivery system so such an interruption to the cherished holiday lighting would be avoided in the future.

In March 2013, the power line to Cape Neddick again had issues, forcing the light to operate on battery power for a few days before going dark. On April 16, the Coast Guard visited the lighthouse to install a solar light. While this provided a more reliable power source for the lighthouse, York Parks and Recreation wanted to have the power line fixed so the annual lighting events could continue. New power lines were strung in early July, allowing the annual Christmas in July even to take place later that month.

For a larger map of Cape Neddick (Nubble) Lighthouse, click the lighthouse in the above map.

From Highway 1 near York Beach, take Highway 1 Alternate (1A) into York Beach and turn east onto Nubble Road. Follow Nubble Road to Sohier Park Road, which leads to a parking area from which you can see Cape Neddick Lighthouse.

Finestkind Scenic Cruises of Ogunquit offers cruises that pass by the lighthouse.


Cape Neddick Lighthouse can be seen in the 1949 movie "Lost Boundaries" and in the 2012 movie "Hope Springs."