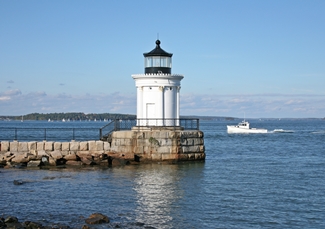 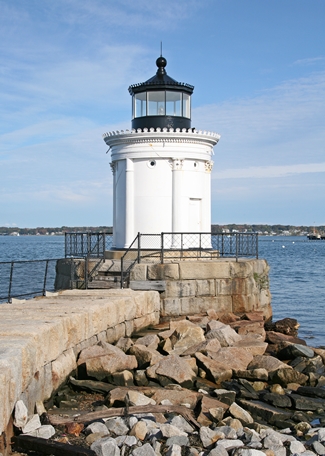 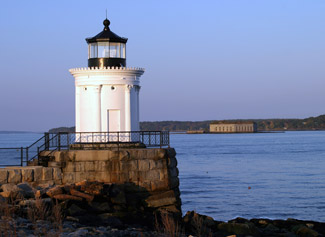 Portland Breakwater Lighthouse is a relatively minor navigational aid designed to mark the end of a breakwater and help guide vessels past the shoal-laced entrance to Portland Harbor. The breakwater was built in response to popular demand after an 1831 storm that, together with a high tide, caused widespread damage to ships, piers, and buildings in Portlands exposed harbor. After surveying the harbor, the Army Topographical Engineers submitted a report in 1833 recommending the construction of a 2,500-foot rubblestone breakwater along the southern side of the entrance to the inner harbor. Construction of the first section of the breakwater began in the summer of 1836 using a $10,000 appropriation by Congress. A local builder named Freeman Bradford was the contractor, and one-third of the rubblestone structure was in place by the end of that year. The following year, Bradford received an additional $25,000 to continue his work, and $26,366 more in 1838. By the end of 1838, the breakwater was 1,800 feet long, but it would grow no farther as the project was well over its projected cost of $44,417, and all additional funding requests were denied. Besides, the breakwater seemed to be doing its job well, keeping the heavy swells during high tides from inflicting damage on the inner harbor.

A beacon on the outer end of the breakwater was part of the original plan, but not surprisingly it was never completed when funds were not provided to extend the breakwater to its original design length. Meanwhile, local mariners complained loudly that the unlit breakwater was more of a navigational hazard than a harbor improvement.

Finally, in 1853, seventeen years after work on the breakwater started, the Lighthouse Board realized the project was not going to be completed and successfully petitioned Congress for $3,500, explaining the breakwater is very much in the way of vessels entering the harbor, and a small light is needed on the end of it. The Lighthouse Board was prompted to act by petitions from the masters of steamers running between Portland and Boston and by managers of the Board of Trade for Portland. In their petition, the managers wrote: The main entrance to our lower harbor (so termed) is one of the best on the whole Atlantic coast; but after entering the lower harbor, the breakwater upon one side of the main channel, and Hog Island ledge on the other, make it dangerous in the night to come into the inner harbor abreast our principal wharves; but with a single light on the end of the breakwater, vessels could come to anchor in the inner harbor at any time.

In 1855, an octagonal wooden tower with sloping sides was completed atop two courses of ashlar stone. A sixth-order Fresnel lens in the towers lantern room produced a fixed red light at a height of twenty-five feet above high water. The first keeper was W.A. Dyer, who was paid an annual salary of $400. Keeper Dyer resigned after two years and was replaced by William Willard, who died of a tumor in 1860 at the age of just twenty-six. Williams older brother Benjamin looked after the light next but was removed after just four months.

Although the lighthouse was close to civilization, it was not one of the more pleasant places to be stationed. Portions of the breakwater had not been finished with the smooth ashlar capstone as originally planned, and consequently the breakwater was rough in some sections. The uneven surface was difficult to traverse in the best conditions and was nearly impassable in icy conditions. During storms, waves and spray inundated the breakwater, battering the lighthouse and often soaking the keeper.

In 1865, Colonel J.D. Graham of the Army Corps of Engineers recommended that the breakwater be extended an additional 400 feet, and the following year Congress funded his $105,000 project. Grahams sudden death, however, forced the postponement of the work, and his successor, Brevet Brigadier General B.S. Alexander set aside the intended design and conducted his own survey of the harbor. Even though the estimated cost of Alexanders extension was roughly half of Grahams, government bureaucracy demanded further studies of the breakwater and the harbor. Before any work began, Alexander was replaced by Lieutenant Colonel George Thoms, who at least got permission in 1868 to cap the unfinished portions of the breakwater with stonework.

The keepers residence, located onshore, was torn down in 1871 and replaced with a new one built upon the same foundation. The extension of the breakwater finally began in 1872 and was completed in September 1873. The wooden tower was placed at the end of the extended breakwater until funding for a more permanent lighthouse could be obtained.

In 1874, Congress approved $6,000 to replace the wooden lighthouse that had become decayed and unfit for further service. The new structure used a unique design based on the Choragic Monument of Lysicrates, a structure near Athens, Greece dating from the fourth century B.C. Completed in 1875, the twenty-six-foot-tall cast iron tower is slightly shorter than its predecessor. Six cast-iron Corinthian columns were positioned at equal intervals around the towers perimeter, and Greek roof edge decorations called palmettes were used to finish the top of the gallery deck and lantern.

No longer needed, the old wooden tower was relocated to the nearby buoy depot on Little Diamond Island, where it was modified to serve as a lookout tower.

The lights characteristic was changed in 1878 from fixed red to a red flash every fifteen seconds, and then later to a fixed red light punctuated every forty seconds by a red flash. By 1886, a handrail extended along the entire 1,900-foot length of the breakwater to help steady the keepers on their journey to and from the lighthouse in inclement weather.

In 1889, plans were made to build an addition to the light tower to permit the keeper to remain near the light both day and night. The 1889 Annual Report of the Lighthouse Board describes the resulting structure: This station contained no provision for a dwelling for the keeper, and it was only accessible to him from shore by the breakwater, which is 1,900 feet long, at much discomfort, and even peril in severe storms, when the breakwater was covered with ice. An annex to the tower containing two dwelling rooms was therefore built. In 1903, an attic and two small storerooms were added to the dwelling.

Starting in 1896, a fog bell with an electric striking mechanism was placed on Staniford Ledge buoy, located 300 feet northeast of the breakwater. During the winter months, the bell was relocated to the breakwater where it would toll its warning until the harbor was once again free of ice and the bell could be returned to the buoy. The bell was permanently located at the lighthouse in 1898, and the following year a Stevens striking machine was installed, replacing the electric striker. In 1903, a bell house was built to shelter a mighty 1,000-pound bell that replaced a 400-pound bell.

Preston Marr, the last keeper of the breakwater light, was born in 1871 at Hendricks Head Lighthouse, where his father served as keeper for nearly thirty years. Preston Marr began his lightkeeping career at the Cuckolds, where his two older brothers also started their service. After eight years as an assistant to his brother Clarence, Preston was promoted to head keeper of Cuckolds Lighthouse and served in this capacity for twelve years before being transferred to the breakwater light.

Portland Breakwater Lighthouse was electrified in 1934, and then operated by remote control by the keepers at Spring Point Ledge Lighthouse. No longer needed, the dwelling connected to the tower was removed in 1935.

In 1940, the Todd-Bath Iron Shipbuilding Company built a facility along the south shore next to the breakwater and lighthouse. Due to the demands of World War II, which was raging at the time, fill was placed along both sides of the breakwater to enlarge the companys property. Only 100 feet of the breakwater remained in open water, and large cranes and dry docks towered over the small lighthouse, rendering it basically useless as a navigational aid. The light was finally discontinued in June 1942.

In 1973, Portland Breakwater Lighthouse was placed on the National Register of Historic Places. South Portland Rotary Club and Spring Point Ledge Light Trust subsequently refurbished the lighthouse, and it was relighted as a private aid to navigation in a ceremony on August 14, 2002. Today, only the ornate tower remains at the end of the short breakwater, but onshore a small park, known locally as Bug Light Park, has been built for the enjoyment of those coming to view the unique tower and watch the many vessels entering and leaving Portland Harbor.

For a larger map of Portland Breakwater Lighthouse, click the lighthouse in the above map.

From Highway 77 in South Portland, turn east onto Broadway and follow it for 1.4 miles to Pickett Street. Turn left onto Pickett Street, which will become Madison Street and lead to Bug Light Park, from where you can walk the short breakwater to the light.

The lighthouse is owned by the City of South Portland. Grounds open, tower closed.