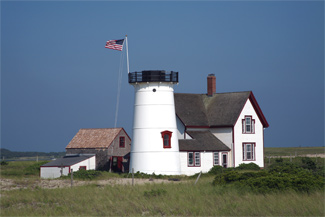 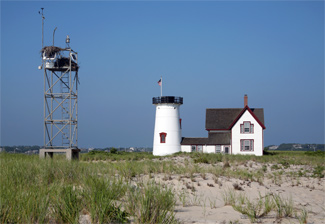 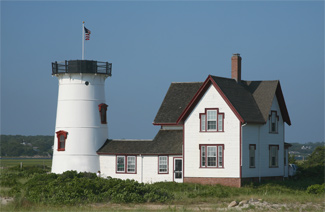 Stage Harbor Lighthouse, established in 1880, had a much briefer and perhaps a bit less interesting history than many other beacons on Cape Cod, however, the stations twentieth century keepers stand out for their exemplary service, frequent commendations, and occasional bootlegging.

In 1605 and 1606, Samuel de Champlain explored the Chatham and Stage Harbor area of Cape Cod, naming it Port Fortune. He proclaimed the area advantageous for colonization, but subsequent run-ins with the native Monomoyick tribe revised his opinion. Roughly a half-century would pass before the English would settle there, and as the areas importance grew as a fishing port, Stage Harbor took its name from the fish drying racks, or stages, used locally.

Lighthouse Board records for 1878 contain a recommendation for a fifth or sixth-order light at Stage Harbor: The establishment of a light at this place giving a good range with one of the Chatham lights, would serve as a guide into Old Stage Harbor, and would be of great value to vessels seeking refuge there at night and during bad weather. If built on the beach, the light-house, with keepers dwelling, including apparatus and land, would cost, say, $10,000. On March 3, 1879, Congress appropriated the requested amount.

The station, consisting of a wood-frame keepers dwelling and a forty-eight-foot-tall iron tower, painted red and equipped with a fifth-order Fresnel lens, was built on Harding Beach, named for Joseph Harding, a farmer who had owned the land. Though officially named Stage Harbor Lighthouse, the station has also been known as Harding Beach Lighthouse. The structures were erected in 1880 at a cost of $9,882.74, and the light was first exhibited on July 15 of that year. A brick oil house was added to the station in 1905, and in 1907, the color of the tower was changed from brown to white.

A series of outstanding keepers began with Alfred A. Howards appointment on October 16, 1906. Howard would receive several commendations while at Stage Harbor Light along with an efficiency star.

On September 19, 1912, Keeper Howard discovered a bottle containing a card on the beach near the lighthouse. The card belonged to Thomas W. Cahill and had written on it that whoever found the bottle was entitled to five dollars. Cahill, a delegate of the American Amateur Football Association, was returning from the Stockholm Olympic games aboard the Baltic when he devised the plan to throw a bottle overboard while waiting for a bar to open. The bottle had taken fifty-five days to travel roughly 1,200 miles.

Keeper Howard was first commended on October 30, 1912, for the courtesy extended Mr. A.G. Chapin and party of four others, in towing their catboat into port, and transporting the party from anchorage to the shore, upon receipt of signals from the boat that fuel was exhausted. Another commendation quickly followed on November 5, 1912, for guiding the Yacht Arcturus and its owner, who was unfamiliar with the area, into port.

On March 30, 1913, a fresh southerly breeze caused Walter C. Hardings dory to capsize. Harding, a surfman at the Monomoy Life Saving Station, wrote: Had it not been for the prompt assistance of A. A. Howard, Keeper of Hardings Beach Light, it would have ended seriously. Harding reported: through the kindness of Keeper Howard, I was taken from the bottom of my dory and carried to the lighthouse where I was furnished with dry clothing and made as comfortable as possible. For this, Howard received another commendation.

Hardings next commendation was for a far more unusual sort of rescue and came following a December 19, 1914 letter written by Captain Ephraim Smith to the Lighthouse Inspector in Boston:

I deem it my duty to report to you the valuable assistance rendered me by Alfred A. Howard, Keeper Stage Harbor Light Station, in saving my horse from drowning; also supplying my man with rubber boots and dry stockings, etc.I sent my man after seaweed on Hardings Beach, who is quite elderly and his sight not very good. In driving the horse across the marshland, the horse got mired and went down in mud and water. My man couldnt do anything to save the horse, so he ran for Mr. Howard, the light keeper, at the station; who responded to the call readily and through some very hard work got the wagon and harness clear and then got the horse out of the quicksand and mud and water to hard land all right. And as he would not take money for his very kind service, I take these means to write you for your kind consideration towards commending him for his prompt and efficient aid towards saving my pet and valuable property.

This commendation would come to Howard from Secretary of Commerce William C. Redfield.

Howard received an efficiency star (one of seven in his area) in 1914, and his salary was increased $40 annually to $600 in 1915. He transferred from Stage Harbor Lighthouse to Ipswich Lighthouse on May 1, 1916.

Mills Gunderson, who had been keeper at Boston Light Station at $804 per year, was appointed keeper following Howard, and his salary reduced to Stage Harbor Lights $600. Keeper Gunderson received a commendation in 1918 for the excellent condition of his station.

On June 15, 1919, Mills Gunderson hung himself in a shed for unknown reasons. Stanley M. Gunderson, Mills son, who had been assistant keeper since June 23, 1919, following his army discharge for physical reasons, replaced his father. Stanleys salary began at $780 annually.

Stanley received a number of pay increases over the years, finally leaving the station on June 30, 1933, at $1,380 per annum. He also was the recipient of many awards, including annual commendations beginning in 1920 for the outstanding condition of the lighthouse.

Something else also began in 1920 and ran until 1933 that provided Stanley with another means of adding to his salaryprohibition. Stanley utilized the covered walkway running from the house to the tower as a secret hiding place for booze. Once a surprise inspection turned up the loose floorboards, but to Stanleys immense relief, he was merely directed to nail them down.

When the auxiliary yawl Golliway ran aground on the flats near the station on October 12, 1929, Stanley Gundersons report of the incident carried full details on how he rushed to its aid with his own powerboat, then provided the yachts occupants food and dry clothing. Commissioner Putnam of the Lighthouse Service commended Stanley Gundersons timely assistance in this instance.

When plans were announced to replace Stage Harbor Lighthouse with an unwatched light set 308 feet from the old tower, its final keeper did not go without a fight. Stanley Gunderson penned a critical letter to the Boston Post decrying the proposed reduction of candlepower and the change to an unmanned light for creating dangerous conditions for boaters and wasting money.

The present light is easily visible 18 miles yet the lighthouse bureau decides it will be of great value to shipping by putting an unattended light of 260 candlepower [replacing 680 candlepower] supposed to show 10 miles, but which after a storm or two which crusts the lens with an accumulation of salt from the spray, will easily show 3 or 4 miles at most on a good, clear night.

Keeper Gunderson pointed out that unattended lights regularly break down and are frequently extinguished from a week to a month until a tender has an opportunity to come and relight it again. The tender with a large crew costs more to operate and one trip to this station would cost as much as it would to keep the present attended light for a period of six months, not counting the trips to put in new acetylene tanks once or twice a year.Yet to save money they put in something that is far more expensive and less reliable and call that economy and put another employee on the unemployment list. Rather a poor way to reduce unemployment and surely no help toward better times.

Despite Gundersons protests, the plan for the automated light was implemented on June 16, 1933. Starting September 16, 1933 and continuing to March 15, 1934, Gunderson was given temporary work as a laborer at Woods Hole Lighthouse Depot, a position limited to six months by regulations. This was then followed by his appointment as assistant keeper at Nantucket (Great Point) Light Station with a salary of $1,320 per annum on March 26, 1934, where he remained until he resigned from lighthouse service on March 31, 1935.

Following automation, Stage Harbors lantern room was removed and the tower capped. The government then sold the lighthouse and the three acres it sat upon to an army officer. In early 1936, it was purchased by Henry Sears Hoyt, who later discovered the parcel had been part of the 4,000 acres granted by local Native Americans to his ancestor William Nickerson, the founder of Chatham.

The lighthouse is still in the Hoyt family, who occasionally open it to the public. It remains rather primitive, without plumbing, except for a single pump, and has no electricity. A nearby skeleton tower continues to function as an active navigational aid.

For a larger map of Stage Harbor Lighthouse, click the lighthouse in the above map.

From Highway 28 in West Chatham, turn south on Barn Hill Road. After 0.4 miles, bear right onto Hardings Beach Road. Continue for 0.8 miles to the parking area at the beach. The lighthouse can be reached from the beach by following a sandy road east along the shore for just over a mile. The lighthouse can also be seen from a distance across Stage Harbor by proceeding south from the rotary in Chatham on Stage Harbor Road. Stage Harbor Road will become Champlain Road after about 1.2 miles. Continue on Champlain Road for about 0.6 miles to Sears Road. Follow Sears Road to the boat launching area at its end, from where you will see the lighthouse across the harbor.


You might be tempted to shed your shoes for the sandy hike to the lighthouse, but you might want to think twice about it. If your feet aren't pretty tough already, you might develop a good set of blisters that could impede your tramping during the remainder of your vacation. Take it from first-hand experience.