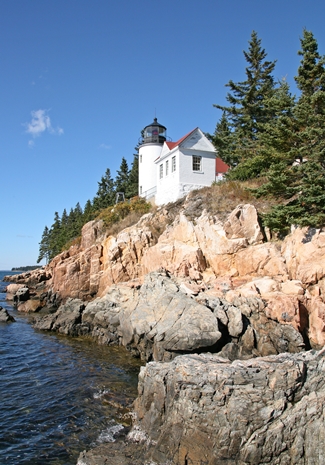 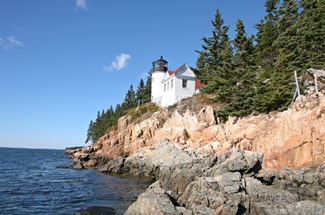 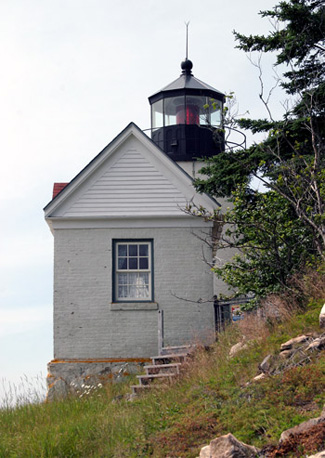 With an area of 108 square miles, Mount Desert Island is the largest island off the coast of Maine, and the second largest island on the eastern seaboard, after New Yorks Long Island. When Samuel de Champlain saw the island form the sea, he noted its summits were bare, and gave it the name île des Monts Déserts, or island of the Bare Mountains. Disturbed by the increasing development at Bar Harbor, George B. Dorr formed Hancock County Trustees of Public Reservations in 1901 to preserve lands on Mount Desert Island for the perpetual use of the public, and by 1913, the corporation had acquired 6,000 acres. Dorr offered the land to the federal government, and in 1916, President Woodrow Wilson announced the creation of Sieur de Monts National Monument. Three years later, President Wilson signed an act changing the national monument to Lafayette National Park, the first national park east of the Mississippi. Dorr, whose efforts were called the greatest of one-man shows in the history of land conservation, was appointed the parks first superintendent. In 1929, the name of the park was changed to Acadia National Park.

In 1855, W.B. Franklin, the lighthouse inspector for Maine and New Hampshire, reported: There is a very good harbor about four miles west of Mount Desert harbor, called Bass harbor. A light is necessary to assist vessels in entering it; and I recommend that $5,000 be appropriated for a light-house on Bass Harbor Head. Congress allocated $5,000 on August 18, 1856 for purchasing the necessary land and constructing Bass Harbor Head Lighthouse. Roughly three acres on the southwestern tip of Mount Desert Island were purchased for eighty dollars in June 1857, but before the Attorney General approved the title, it was too late for work to begin that year.

Construction of the lighthouse was carried out in 1858, and afterward the remaining amount of $16.65 was returned to the surplus fund. On September 1, 1858, John Thurston climbed the stairs in the tower, lighted the lamp in Bass Harbor Head Lighthouse for the first time, and the beacon began guiding mariners into Bass Harbor and Blue Hill Bay. The lighthouses white cylindrical tower is only thirty-two feet high, but its light is fifty-six feet above sea level thanks to the granite bluff on which it stands. Originally outfitted with a fifth-order Fresnel lens, the lighthouse was upgraded in 1902 to a Henry-Lepaute fourth-order lens. A red chimney was placed over the lamp inside the lens to produce a colored light that was visible for thirteen nautical miles.

The original keepers dwelling was a forty by twenty foot wooden structure connected to the tower by a covered, twenty-one-foot-long, wooden walkway. The residence had two stories with five rooms, consisting of a kitchen, living room, and dining room on the ground floor, with two bedrooms upstairs. There was an outhouse about fifty feet away from the structure. In 1893, a boathouse, which measured twelve by twenty-four feet and was equipped with a 100-foot railway, was erected. Until a road reached Bass Harbor Head, all supplies had to be brought in by boat. A hand winch was furnished in 1895 to help haul the stations launch up the steep railway to the boathouse.

A tall, pyramidal bell tower was added to the station in 1876, and then in 1897 a brick fog signal building was erected a few yards closer to the rocky cliff. A 4,000-pound fog bell was suspended outside the fog signal building. This mighty bronze bell was later replaced by an 1,800 pound version, and then in 1949, a 1,500 pound bell was mounted on a stand near the tower and electrified. A brick oil house was added in 1902, and a barn in 1905.

Modifications were made to the keepers house over the years. In 1900, it was enlarged to add an office and to make the kitchen larger. Upstairs, a third bedroom and a bathroom were added.

Water for the keeper and his family was obtained by capturing the rain from the dwellings roof and storing it in an 1,800-gallon brick cistern located in the cellar of the dwelling. The longest-serving keeper at Bass Harbor Head Lighthouse was Willis Dolliver, who was in charge of the station from 1894 until 1921. Keeper Dolliver began his lightkeeping career in 1888 as second assistant keeper on Mount Desert Rock and was seventy years old when retired from Bass Harbor Head. In 2016, ceremonies were held at Mt. Height Cemetery in Southwest Harbor to honor lighthouse keepers buried there, and one of the graves that received a special U.S Lighthouse Service marker was that of Willis Dolliver.

The lighthouse was automated in 1974 and remains an active aid to navigation. An occulting light (four seconds on and one second off) is made red by an acrylic shroud that covers the Fresnel lens. Since automation, the lighthouse has served as quarters for the Commander of the Coast Guard Group Southwest Harbor. The barn has since been converted into a garage to house the now preferred mode of transportation, but according to one coastguardsman, chew-marks left by horses are still evident in the wood inside the garage. The grounds are open to the public, although the lighthouse itself is not. The station is listed on the National Register of Historic Places.

In July 2010, President Barack Obama became the first sitting president to visit Acadia National Park. Accompanied by his wife and two daughters, President Obama spent three days in the park and paid a visit to Bass Harbor Head Lighthouse along with other popular sites.

In 2012, Bass Harbor Head Lighthouse was featured on the back of a quarter issued as part of the U.S. Mints America the Beautiful Quarters Program, which features one site in each state, plus Washington, D.C. and the five U.S. territories. The lighthouse received more notoriety in 2016 when the U.S. Postal Service issued a stamp featuring a photo of the lighthouse in observance of the National Park Services 100th anniversary.

In September 2017, the Coast Guard offered to transfer ownership of the iconic Bass Harbor Head Lighthouse and two-and-a-half acres of land to the National Park Service to become park of Acadia National Park. The lighthouse had been vacant since 2012, when the Coast Guards commander of Southwest Harbor Station stopped using the keepers dwelling as a residence. Christie Anastasia, the parks public affairs specialist, said the park is considering the possible acquisition of the lighthouse. Were really thinking about it and doing due diligence to understand the costs of taking on that facility, she added. It probably needs some work just to get it up to usability, and theres also the cost of maintaining it. Were also very aware that it is an important property to everyone on the island, so we fully intend to share more information with the public, town officials and other stakeholders when we are at the point that we can do that.

The Park Service did not take long to make a decision on assuming ownership of the lighthouse, as they announced in November 2017 that they would take possesion of the property. As lighthouses are expensive to maintain, the Park Service is looking at a few uses for the lighthouse that will generate revenue such as offering the two-bedroom lighthouse as a vacataion rental or establishing a café or coffee shop in it. Roughly 180,000 people already visit the lighthouse each year so opening a business that would cause people to stay at the site longer would mean the twenty-seven parking spaces near the lighthouse might be inadequate.

Ownership of the lighthouse property was officially transferred from the Coast Guard to the National Park Service on July 8, 2020.

For a larger map of Bass Harbor Head Lighthouse, click the lighthouse in the above map.

The lighthouse is owned by the Coast Guard, with the dwelling being used by Coast Guard personnel. Grounds open, dwelling/tower closed.