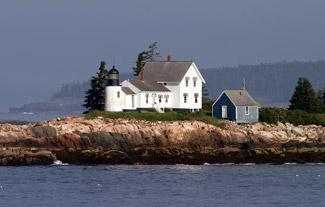 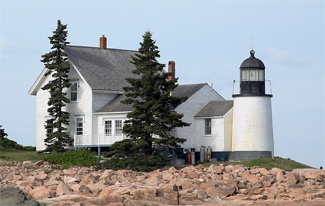 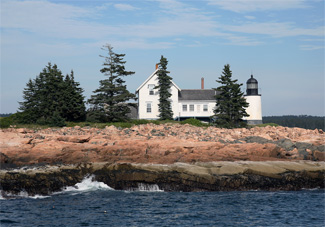 Information about lighthouses primarily comes from lighthouse keeper logs, Lighthouse Board reports, and personal accounts in various forms. Thus, it is a tragedy that the keeper logbooks, dating from 1856, went missing from Winter Harbor Lighthouse on Mark Island around 1983. Hopefully, the logs will be returned and not only because a substantial reward has been offered.

The bulk of personal information about Winter Harbor Lighthouse, also known as Mark Island Lighthouse, now comes from those who purchased the station after its 1933 retirement, which is unsurprising given that most of its private owners have been writers.

During the lighthouses seventy-six years of service as an official guide to navigation, from January 1, 1857 to August 1933, only nine keepers and their families lived on the island. Situated just a mile from shore, Winter Harbor Lighthouse was considered a good posting for families. The first keeper of the lighthouse was Frederick Gerrish, who lived in the brown, one-and-a-half story, wood-frame house with his wife Susan and their eight children until 1861, when W.N. Wasgatt took over. Another head keeper was Civil War veteran Benjamin Maddox, who lived at Mark Island with his wife Olivette from 1888 to 1896. The keeper to remain the longest at the light was Adelbert C. Leighton (1896 to 1927).

Congress appropriated $4,500 to build the light near the entrance to Frenchman Bay, across from Bar Harbor, to guide ships to safe harbor and to keep them off nearby treacherous ledges. From the nineteen-foot-tall, white, cylindrical, brick tower, a fixed white light beamed forth from a fifth-order Fresnel lens at a focal plane of thirty-seven feet above high water. For some years, the station also had a fog bell with an automatic striking mechanism.

Lighthouse Board records state that following various repairs made in 1867 through 1869, the station was considered to be in good condition, but in 1876, it was noted that the old one-and-a-half-story frame dwelling, which was decayed past repair, had been replaced by a new one-and-a-half-story frame structure built just north of the old site. Two years later, a twelve-by-twenty-foot wooden boathouse was built.

In 1880, the exterior walls of the dwelling were painted with two coats of white paint, and in 1882 the dwelling was underpinned with stone and brick. A lightning rod was installed in 1889, and in 1905 the station saw the construction of an oil house. By August 1933, its official history as a navigational guide was over, having been replaced by a lighted bell buoy set to the southeast of the lighthouse.

The last keeper of Winter Harbor Lighthouse was Captain Lester Cap Leighton. His grandson, Chan Noyes was christened on the way to the island. When Chan was one year old his mother stepped out of the stations boat at the island, slipped, and dunked them both in the water. That was my christening, Chan said.

Although Leighton lived in nearby Prospect Harbor until 1970 (when he passed away at the age of ninety-four), he never returned to Mark Island again after leaving in 1933.

Winter Island Lighthouse was auctioned off in 1934 to George Harmon of Bar Harbor for $552. In 1939, Harmon sold Mark Island for $2,000 to writer and musician Bernice Bunny Richmond and her husband Reginald Robinson, a sociologist.

As a girl, Bernice had visited the keepers at Halfway Rock in Casco Bay. That is why I wanted a lighthouse of my own, she explained. Bernice wrote two books about the years she and her husband spent on Mark Island: Winter Harbor and Our Island Lighthouse. In Winter Harbor, she described her first glimpse of the lighthouse: In each life there are but a handful of great moments and I knew this was one of mine. I could not look hard enough or deep enough. I was dreaming of something I had lived, or living something I had dreamed. No matter how often I looked at the rugged shore line and the green of the island where the oil house, the shop, and the boathouse stood, my eyes always came back to trace the outline of the tower and the house. It was the tower I loved most. It stood with its one small window gleaming faintly and its black lantern silhouetted against the green of thickly wooded Turtle Island half a mile beyond. It seemed to me to be standing like a sentinel before our home, watching everything at sea. Bernice learned how to be self-sufficient, perform repairs, raise vegetables, and row to town for supplies and mail.

Bernice also continued the tradition of keeping a log, recording storms and other occurrences, such as a visit by disembodied spirits: They seemed to be a mixed group of people who came down the walk under my window chatting casually, their feet audibly scraping the cement. They knocked at the back door in a moderate way and talked among themselves as they waited for me to come and open it. My callers werent discouraged because I wouldnt open the door and repeated the knocks several times before going away. I dont know yet where my unreal callers came from or why they gave up knocking. Bernices brother also heard voices in the lighthouse and couldnt understand why his sister would want to be there alone.

It is hard for people living on the mainland to understand the contentment found on an island, Bernice wrote. I couldnt put into words how terribly important it was to sleep on the island with sea sounds encircling me. I couldnt explain how I looked forward each morning to that first rush of salty air through my kitchen door, to the early tour I take over the vein-like paths to the gardens.

After reading Bernices books, childrens book authors Pat and René Prudhommeaux decided to rent the island, despite never having seen it. Following Bernices divorce, the Prudhommeauxs bought Mark Island for $2,000 in 1956. For the next eighteen years, they lived there full time. In 1957, under the nom de plume Joan Howard, Pat and René wrote, The Light in the Tower, a childrens book about the Christmas tree they set in the tower each year for the fishermen. After Pat passed away on the island in 1974, René moved ashore, but refused to sell the island. Alone and abandoned, the lighthouse deteriorated. Duck hunters in their boats would shoot out the tower windows for fun. Then in 1983, producer, director, and playwright Gerald Kean bought the island for $87,500, though the asking price had been $125,000.

Although Kean attempted some repairs to the best of his ability, on August 7, 1995, the deed was conveyed to security analyst turned writer and artist William C. Holden, III. Holden, a Harvard Business School graduate, worked in investments just long enough to stash away some money, and then retired at the age of forty-four. After living on a farm and raising sheep, pigs, and goats for a decade, he learned Mark Island was for sale. Holden found the lighthouse had been practically abandoned for more than ten years when he first stepped foot on the island. All the tower panes were gone, allowing water to pour in and cover the spiral staircase in rust. Windows in the attached keepers house were broken, and birds had taken up residence. When I say the deed was conveyed to me, it is because I have never felt that anyone ever owns Mark Island, Holden says. I became in my mind nothing more than a caretaker, entrusted with a gift. For me the island and lighthouse will forever belong to the old lighthouse keepers and their families, now long gone; to the Winter Harbor lobstermen who pass by each day and have always looked my way, to check to see if I might wish their assistance with anything; and most of all the island will forever belong to the townspeople of Winter Harbor and to all of the people who have been fortunate enough to walk the path from the boathouse to the keeper's house, through the field of daisies and foxglove, and experience the magic that is Mark Island and the Winter Harbor Lighthouse.

Holden spent about $650,000 to purchase and repair the property, working diligently for more than a decade. He even returned the light to the tower in 1996. An orange light had to be used to denote that it was a private light, not an official U.S. Coast Guard light. Using six, small Fresnel lens panels, a car top flashing orange light, and a twelve-volt battery, Holden rigged up a beacon in the lantern room. Although the light could only be viewed up to about two miles away, it did restore some of Winter Islands dignity.

While lying in bed at night, Holden could see the light in the tower without lifting his head and, at times, could hear the voices of ghosts coming from the kitchen below.

In 2004, the island was available again, this time for $1.25 million. For sale was the island, a dock, the brick lighthouse, and the attached three-bedroom keepers house that included a large kitchen with a cookstove, dining room with a wood stove, large living room with a kerosene stove, one-and-a-half bathrooms, and a music room with an antique organ. The priceless views of Schoodic Point, Cadillac Mountain, and the islands of Frenchmans Bay came, along with the ghosts, at no extra charge. The lighthouse sold in October 2004 to an interior designer from New York City.

Located on Mark Island in Winter Harbor and visible from the eastern section of Acadia National Park.
Latitude: 44.36143, Longitude: -68.08764

For a larger map of Winter Harbor Lighthouse, click the lighthouse in the above map.

From Highway 1 just west of West Gouldsboro, turn south on Highway 186. Follow Highway 186 for just over seven miles and then turn right on Moore Road, which leads to Acadia National Park. After 1.4 miles you will enter the park, where you will be on Schoodic Road, which is a one-way loop around the park. The lighthouse will be visible on an island offshore roughly one mile after entering the park.


For those who have always dreamed of owning a lighthouse but realize the dream isn't likely to come true, reading Our Island Lighthouse is a good way to capture the experience vicariously. Bernice Richmond (Robinson) and her husband, Reg, were living in Manhattan in 1939, when they read in a newspaper clipping of a chance to purchase an island lighthouse in their home state of Maine. The couple jumped at the opportunity and spent the next several summers at their new home in Winter Harbor.

In the book, Bernice details life on the island during the summers of 1942-1945. While Reg was still employed, Bernice would spend much of the summer alone on the island with their two cats, John and Willie. Life on the island was difficult as they had to row their boat Geranium to and from the island, and their eleven-room lighthouse was in constant need of repairs and upkeep. However, one easily gets the impression that all the work was rewarded many times over with the joy found in island explorations, lobster bakes, sunsets, and even the occasional violent storm.