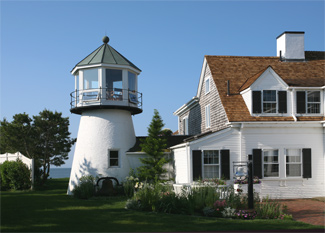 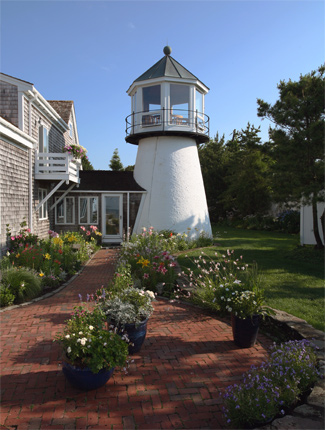 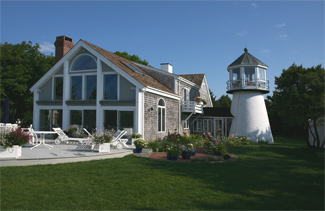 Hyannis, one of the Town of Barnstables seven villages, takes its name from a corrupted version of the name Iyanough, a friendly sachem of the Cummaquid tribe of Wampanoag Indians. Iyanough welcomed the Pilgrims when they landed in his part of Cape Cod. He provided them with dinner and entertainment and then came aboard their boat to lead them to Nauset. When they found themselves in his area again, he led them to fresh water and held a celebration of singing and dancing. The Pilgrims were impressed and described him as follows: Iyanough, a man not exceeding twenty-six years of age, but very personable, gentle, courteous, and fair conditioned, indeed not like a savage, save for his attire. His entertainment was answerable to his parts, and his cheer plentiful and various. Iyanough is President George W. Bushs tenth great grandfather.

During the 1800s, Hyannis importance as a port for fishing and trade expanded, and by the 1840s, over 200 shipmasters were living in Hyannis and Hyannisport. A local man, Daniel Snow Hallett, recognized the need for a lighthouse and decided to privately establish one. He was described as a very genial gentleman of the old school who always manifested a keen interest in the various activities of the village.

Daniel Snow Hallett moved a small, one-room shack to the spot where the Hyannis Lighthouse now stands. In the loft, he installed a light that shone through a four-paned window. His only child, Daniel Bunker Hallet, helped maintain the light. In the evenings, the boy walked two miles with his dog, Pilot, from Pickens Cove across the fields to the shack. He would sleep in the loft, keeping the whale-oil lantern trimmed and burning, then return home in the morning to eat breakfast before going to school. The shack became known as The Bug, and some say its lantern and reflector were surplus from Point Gammon Light.

The elder Hallett printed directions on how to sail into the harbor, which he sold to the captains of coasters to help finance the light. He also started a petition to Congress for the establishment of an official lighthouse.

On August 14, 1848, Congress appropriated $2,000 for a small harbor light with a fixed white light and red sector to warn vessels away from Southwest Shoal. Stephen Pleasonton, Fifth Auditor of the Treasury who was charged with overseeing the nations lighthouses, provided a description of the resulting light at Hyannis: With much difficulty a small piece of land was purchased, a small tower erected and fitted up with lamps and reflectors, for the sum appropriated. A man has been employed to attend it, who has a house of his own in the neighborhood, at the rate of fifteen dollars per month.

James Bears was appointed keeper of the new light on February 12, 1849 at an annual salary of $350. Four years later, Captain Almoran Hallet, the brother of Daniel Snow Hallet, replaced Bears as keeper.

On Sept 28, 1850, $800 was approved for a keepers house to be connected to Hyannis Harbor Lighthouse via a covered walkway. In 1856, a fifth-order Fresnel lens was installed in the lantern room, replacing a system of five lamps set in fourteen-inch reflectors, but by 1863, a single lamp set in a twenty-one-inch reflector was being used as the light source. A new cast-iron lantern was placed atop the nineteen-foot-tall conical brick tower in 1863.

Following a lengthy career as a branch pilot (helping guide boats from Maine to Virginia), Pilot John H. Lothrop became Hyannis keeper in 1871. Lothrops son, Alonzo Freeman Lothrop, helped his father at the station and took over following his fathers death in 1878, the year in which the characteristic of Hyannis Light was changed from fixed white to fixed red.

Alonzos lighthouse records for 1882 show that an impressive 6,000 tons of coal, 1,250,000 feet of lumber and 4,000 barrels of fish passed through the harbor, carried by some of the 1,400 schooners and 100 steamers that called at the port. These numbers continued to increase right up to 1899, when Alonzo resigned due to poor health.

On July 7, 1884, $350 was earmarked for a small beacon to range with the main light at Hyannis. This new structure was erected on the Old Colony Railroad wharf in 1885 and when aligned with Hyannis Lighthouse, guided boats into the harbor. As the range beacon was frequently extinguished by storms, the structure had to be almost entirely rebuilt in 1886.

Although the concept of having range lights to mark the harbor was sound, John Peak, who replaced Alonzo Lothrop as keeper, frequently found himself arguing with railroad personnel until they moved parked railway cars that blocked the front light.

Other changes to Hyannis Harbor Lighthouse included the addition of a summer kitchen and fuel-house to the dwelling in 1889 and the construction of a brick oil house in 1902. The wooden deck and brick parapet of the light tower were replaced by an iron deck and wooden parapet in 1904.

Captain John Peak served until 1915, when failing health also forced his retirement. During Peaks time at Hyannis, local kids would come to the lighthouse for sailing lessons.

Lighthouse keepers were expected to make night-time treks to the top of their lighthouse towers to check on the light, but John Peak was rumored to have ingeniously positioned a bedroom mirror so that he could view the light from his bed. Why should I get up to look when I can see it in the mirror? he asked.

Waldo Leighton succeeded Peak as keeper, arriving from Race Point Lighthouse where he had been serving for eight years. One of Leightons three sons, Harvard, thoroughly enjoyed his time at Hyannis Harbor Lighthouse, calling it a wonderful location, a nice place to live, a picturesque site overlooking the whole bay. Keeper Leighton supplemented his humble salary by serving as a caretaker for a few nearby properties, including that of the Kennedys, and by selling clams and scallops that were easily obtained near the lighthouse.

When the areas main wharf was relocated to Lewis Bay, Hyannis Harbor Lighthouse was decommissioned in 1929, and Keeper Leighton was transferred to Nobska Point Lighthouse in Woods Hole. A number of residents were sorry to see Leighton leave and turned out to wish him and his family well.

The lantern room was removed from the inactive Hyannis Harbor Lighthouse, but the front range light remained functioning as an automatic acetylene gas beacon. A.W. Fuller purchased the defunct station for around $7,000. Over the years, the property has been bought and sold several times, and the old keepers house has been markedly altered and enlarged.

The current owners, Janice Hyland and Alan Granby, transformed the dwelling into a fitting showcase for the display of their eighteenth and nineteenth century marine antiques. A new, albeit not quite traditional, lantern room was placed atop the tower in 1986 to bring the lighthouse back to a semblance of its former self. This photograph taken in 2013, shows the red stripes that have been added to the lighthouse.

Remnants of the old railway wharf that extended into Hyannis Harbor can still be seen on the beach near the lighthouse.

For a larger map of Hyannis Lighthouse, click the lighthouse in the above map.

From the intersection of Highways 132 and 28 north of Hyannis, turn south on Hyannis-Barnstable Road. In Hyannis, continue south on Ocean Street to Gosnold Street. Turn right on Gosnold Street and drive 0.4 miles to Harbor Road. Turn left on Harbor Road, where the lighthouse will be on your right near the end of the road.


The lighthouse is visible from the water aboard a Hyannisport Harbor Cruise. In addition to the lighthouse, you will also see the dwellings that make up the Kennedy compound. A good view of a replica of Nantucket's Brant Point Lighthouse is also possible on the cruise. This modern tower was built by a home owner in Hyannis Harbor.