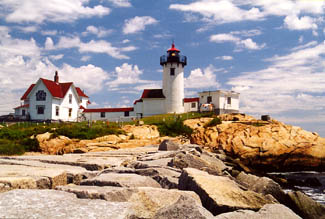 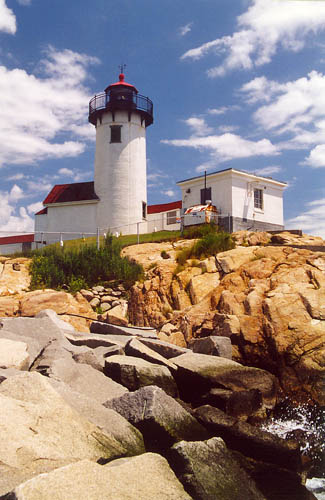 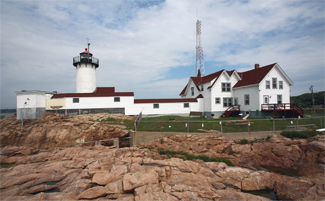 Eastern Point Lighthouse is situated at the eastern tip of Massachusetts Gloucester Harbor. Known as Americas oldest seaport, the harbor has supported fishermen, whalers, traders, and even smugglers since 1616. The Perfect Storm, which was filmed locally and featured the beautiful Eastern Point Lighthouse, illustrates a natural danger awaiting those who depend upon the sea for a living  storms. Between 1830 and 1910, 779 vessels and 5,305 persons out of Gloucester were lost at sea. The Gloucester Fishermans Memorial, located on the edge of the harbor, honors the Gloucester fishermen lost at sea, including 249 that were lost in 1879. In addition to treacherous currents and ledges, locals claimed there was yet another danger lurking in the waters  the Gloucester Sea Serpent. John Josselyn Gent recorded the first sighting of the monster in 1638 and was prevented from shooting it by an Indian who warned of bad luck should he do so. Frequent sightings continued throughout the 1800s. In 1817, hundreds claimed to have seen the shiny monster. A reward was established, and specially outfitted boats cruised the harbor in search of it. It may be that the sea serpent was in fact one of the very creatures that brought prosperity to many localsthe whale.

By the late nineteenth century, sea captains of Gloucester were amassing great wealth trading with China, Suriname, India, and Europe. While those working with Suriname raked in the highest profits, with it also came shame, as the business typically included slaves along with the rum, molasses, and dried fish.

To protect their valuable fleets of handsome schooners, residents appealed for a lighthouse. In 1821, a light was constructed on Ten Pound Island inside Gloucester Harbor, but it was not visible to ships outside the harbor. Sea-goers were known to confuse Bemo Ledge (known as False Point) with Eastern Point, and several ended up wrecked in Brace Cove.

A grove of oak trees had served as a landmark for entering the harbor before Eastern Point Lighthouse was constructed, but in 1829, the Boston Marine Society wrote a letter saying a more permanent marker was needed: it is the opinion of this Society, that the erection of a monument on Eastern Point Cape Ann, would be highly useful to navigation in Boston Baythe old landmarks of trees being nearly decayed and gone...

An unlit stone daymark was built on the point in 1829 for $1,188, after a suitable plot was purchased for $100 from George Burnham. When the monument proved insufficient, residents appealed to the government again, but President Andrew Jackson stepped in to block construction of Eastern Point Lighthouse (perhaps because Gloucester had not supported him in the 1828 presidential election). However, strong Congressional support managed to push the project through, and Jackson ultimately signed the authorization.

Construction on the light began in 1831 and cost $2,579. Samuel Friend converted the former daymarker into a lighthouse through the addition of a wrought iron lantern and a copper dome. The fixed white light in the thirty-foot tower first shone on January 1, 1832. As Eastern Points first keeper, Samuel Wonson (keeper 1832  1849) was paid $400 annually. Wonson and his wife Lydia moved into the tiny brick keepers house which had a kitchen and two rooms on the ground floor and two more small rooms above that.

While less costly than building a lighthouse from scratch, the makeshift structure had its disadvantages, for the small, six-foot-diameter lantern room did not allow a man to stand comfortably while trimming the wicks of its ten, whale-oil-fueled lamps. Engineer I.W.P. Lewis 1843 inspection found the light was decayed, leaky, without ventilation, and in need of rebuilding. While highlighting the importance of the location, he recommended the number of lamps could be reduced to just one without diminishing the lights effectiveness.

Keeper Wonson wrote about the condition of the station for Engineer Lewis report to Congress:

I was appointed keeper of this light on its first being lit, in January, 1832, upon a salary of four hundred dollars. There is about one acre and three-quarters of surface on this estate, the most of it being naked ledge. The light-house here was originally put up for a monument or beacon, and erected, I believe, in 1829. It is built of rough-split stone, laid dry, and pointed inside and out; the deck is soapstone; the tower leaks in every direction; the walls inside are covered with ice in the winter, and green mould in summer; the window casings are loose in the walls and rotten besides; the door frames and sills are also rotten; the posts of the lantern only run down one foot in the walls, and in gales of wind it is wrenched and shaken so as to break the glass; the scuttle frame is entirely rotten; the rain blows in under the deck of the lantern, and runs through the walls.

Congress listened. In 1848, the original lighthouse was torn down and rebuilt by Winslow Lewis for $2,550. The new thirty-four-foot-high lighthouse, built of brick, showed a fixed white light after its activation on November 3, 1848.

In 1857, a fourth-order Fresnel lens was installed, increasing visibility of the light from eleven to thirteen miles. A new lantern and hand-wound fog-bell mechanism were also installed that year. Due to the additional work required by the manually operated fog bell, an assistant keeper was assigned to the station.

A new bell weighing about 1,120 pounds was installed in 1868. The bell was purchased with the proceeds from selling the old bell and a condemned bell, which had long been in store in the first district. In September of that year, the fog bell tower was blown down and destroyed, and the striking apparatus much damaged. Luckily, the bell itself was unharmed, and it was hung on a temporary frame where it was rung by hand until repairs were made. A new fog-bell tower arrived at the station and was erected in July 1877. A massive 2,100 was put in use at the station in 1882, and a more powerful striking machine was added in 1886.

On April 1, 1878 the characteristic of Easter Point Light was changed from fixed white to fixed red, and the light was fondly referred to subsequently as the ruby light.

The wooden two-story, Gothic Revival keepers dwelling that was built in 1879 still stands. It was there with Keeper Charles Friend that the famous American artist Winslow Homer spent the year of 1880 painting the seascapes and views of everyday life that would become his most famous works.

Also that year, after a whistling buoy known as Mother Anns Cow was installed to provide an additional warning, summer residents complained that its shrilling disturbed their sleep. In particular, Elizabeth Stuart Phelps (a prominent local writer) called for its removal, claiming she suffered from a nervous ailment. In response, the United States Secretary of Navy ordered the buoy removed from May to October. Following Ms. Phelps wedding to the Rev. Herbert Ward, the Boston Record reported, Since her marriage, Mrs. Ward is much better, and the officer who had to remove the buoy has put it back with the assurance that next summer he will have no orders to disturb it.

Between April 28 and June 30 of 1890, a temporary light was established fifteen feet south of the lighthouse so the 1848 brick tower could be demolished and the present thirty-six-foot-tall, cylindrical brick tower built on its foundation. The old covered way that linked the dwelling to the tower was also demolished at this time, and a new bell tower was erected on a more advantageous site.

Given all the hardships facing keepers in general, those at Eastern Point Lighthouse must have felt fortunate to receive modern conveniences far earlier than those at isolated stations. Electricity arrived at the station in 1896, telephone service was hooked up the following year, and a connection to city water was made in 1901.

In January 1897, a 4,000-pound fog bell, operated by an oil-burning steam engine and said to peal like a cathedral bell, was installed. To diminish the sound on the landward side, a reflector was placed around the bell. A masonry fog-signal house was built on the point in 1907, and in 1923, the fog signal was changed from a bell struck by machinery to an electrically operated bell. A diaphragm foghorn, which sounded a group of two blasts every twenty seconds, replaced the fog bell in 1970.

The 2,250-foot-long breakwater in front of the lighthouse was built using 231,756 tons of Cape Ann granite blocks for $300,000 between 1894 and 1905 to protect the harbor. Before the breakwater was completed, nearly forty ships had crashed into it, demonstrating the need for a light to mark the outward end of the obstacle. A wooden tripod supporting a beacon was installed, and the keepers at Eastern Point Light were given the added responsibility of caring for the light, known as Gloucester Breakwater Light or Dog Bar Breakwater Light, as the breakwater was built over dangerous Dog Bar Reef. This additional duty could become quite dangerous when gale-swept waves broke over the breakwater and ice coated the granite blocks.

In 1908, a second keepers dwelling was added. After being replaced by a modern optic, the towers fourth-order Fresnel lens was placed on display at the Cape Ann Museum in Gloucester.

Assistant Keeper Frank Parsons was helping paint the lighthouse in September 1922 when he fell from staging, struck the rocks below the lighthouse, and was killed instantly. Parsons and another man were hoisting themselves and the staging to the top of the tower when Parsons lost his grip, causing his end of the staging to drop. Parsons was forty-nine and had been in the Lighthouse Service for four-and-a-half years.

When Eastern Point Lighthouse was automated in 1985, approximately twenty neighbors attended the ceremony. Carroll Wonson, a great-grandson of the lights first keeper, was given the honor of being the last person to manually turn on the light, which now exhibits a white flash every five seconds

After taking East Main Street past Niles Beach one is permitted to pass the stone pillars marked private to access the small parking area at the station, where an oceanfront path leads to Dog Bar Breakwater. Access to the lighthouse and keepers dwelling and anywhere inside the stations fence is prohibited. Nevertheless, Coast Guard personnel at the station have witnessed tourists who picnic on the lawn, peer in the windows, and even one who walked into the front door of the dwelling without knocking. Besides the lighthouse and attached keepers dwelling, also found at the station are an oil house (1894), a radio beacon (1931), and a foghorn building (1951).

For a larger map of Eastern Point Lighthouse, click the lighthouse in the above map.

A fourth-order Fresnel lens used in the lighthouse is on display at the Cape Ann Museum in Gloucester.

The light is owned by the Coast Guard. Grounds/dwelling/tower closed.


Eastern Point Lighthouse can be seen in the movie The Perfect Storm.