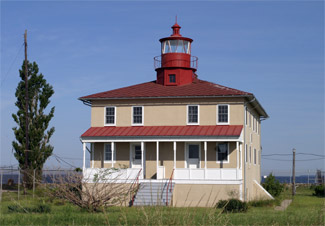 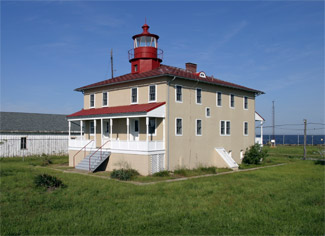 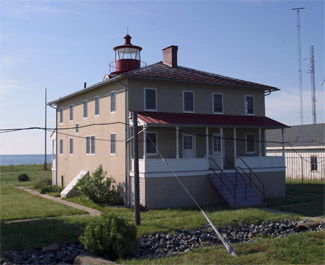 Point Lookout, located on the northern side of the mouth of the Potomac River and described by a naval officer as a bleak, barren sand beach, was first considered for a small beacon in 1825. At this time, Congress appropriated $1,800 to help mark the entrance to the river, but Jenifer Taylor, the owner of the desired parcel on the point, was not satisfied with the $500 he was offered. Commissioners of St. Marys County appealed to the sheriff, and a group of freeholders was assembled and determined that $1,150 would be a fair price for the property. To cover the increased price for the land, $4,500 was allotted on May 28, 1828 to cover the project. The contract for the lighthouse was awarded on July 22, 1830 to prolific lighthouse builder John Donahoo, who erected a white keepers house with a black tower and lantern protruding through its pitched, red-shingle roof. Jenifer Taylor had apparently offered to sell the land at a lower price, if he would have been appointed the first keeper, but this role was awarded to James Davis, who first exhibited the fixed white light from the towers eleven lamps, backed by sixteen-inch reflectors, on September 30, 1830. Just over two months into his tenure, Davis died, leaving the keepers duties to his daughter, Ann Davis. Despite being admonished early on that she could not sell liquor on lighthouse grounds, Ann proved to be a capable stewardess of the light and kept it until her death in 1847. Her successor, William Wood, was somewhat derelict in his duties. During his watch, a cat fell into a barrel of lamp oil, contaminating fifty-six gallons of the valuable fuel. Wood was also responsible for breaking two dozen glass lamp chimneys that were stored in the basement. Because of these indiscretions, Woods wages were garnished in 1849. Another female keeper, Pamelia Edwards, served as keeper from 1855 to 1869, which time frame spanned the turbulent Civil War years.

Before the war, the station received a number of upgrades. In 1855, the Lighthouse Board reported that the keepers dwelling was thoroughly repaired, but a new fence around the station was required as the posts and rails of the existing fence were almost all decayed. An 1858 inspection noted that the bricks of the house had been painted yellow and that the tower was now white, while the shingle roof remained red. A fourth-order Fresnel lens with an arc of 300 degrees was placed in the lantern room in 1857.

Point Lookout was a rather pleasant place before the War Between the States. The point had been part of St. Michaels Manor, owned by the first governor of Maryland while it was still a British colony, and later enjoyed the status of a summer resort, possessing beach cottages and a wharf. The addition of the lighthouse had only added to the charm of the region, but the war would leave permanent, gruesome marks on the landscape.

The U.S. Government leased land on the point and built Hammond General Hospital in 1862 to care for wounded Union soldiers. The following year, small numbers of Confederate prisoners, primarily residents of southern Maryland charged with aiding the South, began to be assigned to the confines of the hospital. After the Battle of Gettysburg, though, the North built prison camps on the point to hold a greater influx of detainees. Point Lookout was strategically proximate to many major engagements, yet it was also set apart making it hard for prisoners to escape. Called Camp Hoffman, the prison had a capacity of 10,000, and forts were built to protect it from Confederate attack. The earthworks of one of the forts, named after President Lincoln, can still be seen on the point.

The prison held about 4,000 Confederates in 1863, but by the following year this number had ballooned to over 20,000, well beyond its capacity. The prison grounds were filthy. It was unsafe to drink from the wells, and during the winter, many perished in their tents from exposure.

About 4,000 soldiers died at the camp, and their remains were interred near the lighthouse grounds. When threatened by erosion, the graves were relocated to a spot alongside Route 5, just north of Point Lookout State Park. The trauma and death associated with the prison camp may be responsible for the large number of strange, paranormal events that have been reported by visitors to the lighthouse. Point Lookout is, in fact, the only light station on the Chesapeake that has been subject to the services of paranormal psychologists. These investigators were able to record twenty-four distinct voices engaged in speaking and singing in various parts of the lighthouse. One voice remarked, fire if they get too close to you, which is thought to be the words of a Union guard in the prison camp. A happier ghost is believed to be that of former keeper Ann Davis, who said the words my home. The figure of Ann Davis has also reportedly been seen standing at the head of the lighthouses stairs clothed in a blue skirt and a white blouse.

After the war, one of the first reported upgrades to the station was the construction of a fog bell tower in 1872 to help mark the entrance to the Potomac River. In May 1883, the roof of the keepers dwelling was removed and an extra story added. This addition, along with two porches attached to the front and back of the house, provided much needed living space. Also in 1883, the station was made into a buoy depot, receiving coal and buoy sheds and a wharf. Being taller than the bell tower, these new structures interfered with sound propagation, and a new bell tower was built at the end of the coal-shed in 1888. This bell tower can now be seen on the grounds of the Chesapeake Bay Maritime Museum in St. Michaels, Maryland.

In 1888, Point Lookout was subjected to a problem shared by other lighthouses on Chesapeake Bay  erosion. The Lighthouse Board reported, water had encroached so far upon the river frontas to cover one end of the foundation of one of the buildings of the depot. An emergency breakwater was quickly thrown together with hundreds of barrels of broken cement. The Board requested $500 for a permanent bulwark made out of large timbers and stone, and this was built the next year. In 1895, an iron oil house capable of holding 1,000 gallons of mineral oil was added.

Major changes were made to the lighthouse in time for the celebration of its centennial year in 1930. The dwelling was enlarged to its current size and remodeled to provide two separate apartments, each with six rooms and a bath. Modern amenities such as hot and cold running water and an up-to-date sanitary system were also added. A wind-electric generating plant was built on the stations ground, the first such installation by the Lighthouse Service in the United States  windmills had been installed previously in U.S. territories for the lights at KaLae, Hawaii and Arecibo, Puerto Rico. The electricity generated by the windmill was stored in an array of sixteen batteries and provided light for the lighthouse beacon and the two apartments.

Two oil engine generators were installed in 1934 to replace the windmill, which was inadequate at supplying the current demand of the station. With this increase in supply of electricity, a new electric T-200 tyfon fog signal took the place of the weight-operated fog bell.

George M. Willis, Sr. served as keeper of Point Lookout Lighthouse from 1917 to 1939 and was commended several times for assisting people in distress. In 1919, Keeper Willis saved three people from drowning and recovered the body of another person who drowned. Four years later, he helped the occupants of a house near the station that had burned down, and in 1925, he provided assistance to those aboard a disabled plane that landed near the lighthouse and put them up at the lighthouse overnight.

Harold King, the Commissioner of Lighthouses, visited Point Lookout on May 6, 1939 and, after noting that both Keeper Willis and his assistant were unable to fully perform their duties, recommended that they be retired. The assistant keeper was so hard of hearing that he had difficulty using the radiotelephone, and Willis had suffered an accident the previous year that left him permanently lame. Keeper Willis retired at the end of June 1939, and Robert Fulcher took charge of the station.

The station was transferred to the Coast Guard in 1939, although civilian keepers continued to exercise stewardship over the light for some time. Chief Petty Officer George Gatton was in charge of Point Lookout Lighthouse in February 1957, when three Navy Skyraider attack planes from Atlantic City Naval Air Station mistakenly fired on Holland Island Bar Lighthouse, which was four miles east of their intended target, a partially sunken ship known as the Hannibal. Keeper Gatton served as a source for reporters covering the incident, which occurred twelve miles east of Point Lookout, and said that the lighthouse was hit by three or four unarmed rockets that tore eighteen-inch holes in the screwpile lighthouse and damaged three of its support beams. Four coastguardsmen were at the offshore lighthouse at the time, but the only injuries were a few minor scratches to two of the men.

As early as 1951, the U.S. Navy started buying up the land around the lighthouse, and shortly after Point Lookout Lighthouse was replaced by an offshore steel tower in 1965, the station was turned over to the Navy. The State of Maryland leased the lighthouse for some time, though this arrangement was canceled in 1980 when the Navy refused to fix a problem with the water system. The Navy was uninterested in maintaining the lighthouse, and the structures only upkeep after 1980 was a superficial cleaning made by volunteers of Point Lookout State Park prior to an annual open house. At other times, the lighthouse, contained within a fenced establishment that was part of the naval air stations radio tracking system, was off-limits.

In 2002, the Navy did contract for a thorough restoration of the lighthouses exterior, and the structure was painted using the color scheme it had in 1927. In a land swap deal, the lighthouse was turned over to the State of Maryland in 2006, and six months later, Laura Berg, who had lived in the lighthouse from 1980 to 1981, co-founded the Point Lookout Lighthouse Preservation Society to raise funds for restoring the lighthouse and making it accessible to the public. Occasional daytime open houses are now available as well as nighttime Paranormal Investigations.

For a larger map of Point Lookout Lighthouse, click the lighthouse in the above map.

From Solomons, MD, take Route 4 south and cross over the Solomons Island Bridge. After the bridge, the first traffic light will be Route 235. Turn left onto Route 235 and follow it south to a town called Ridge. At the blinking red light in Ridge, turn left onto Route 5. Follow Route 5 for just under seven miles to its end at Point Lookout State Park. A per-person fee is required to enter the park. The lighthouse is at the very end of the road.

The lighthouse is open the first Saturday of the month between 10 a.m. and 2 p.m. from April through November. Call Point Lookout State Park at (301) 872-5688 or visit the Point Lookout Lighthouse Preservation Society website for more information and for a schedule of Paranormal Investigation Nights.

The lighthouse is owned by the State of Maryland. Grounds open, dwelling/tower open during open houses and paranormal investigations.