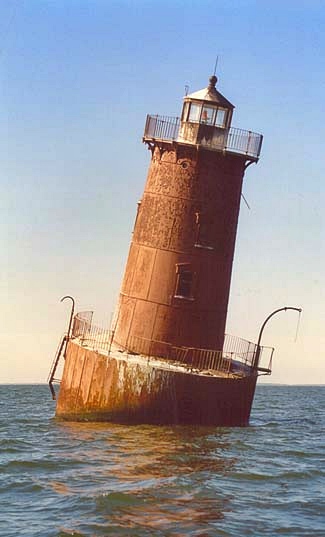 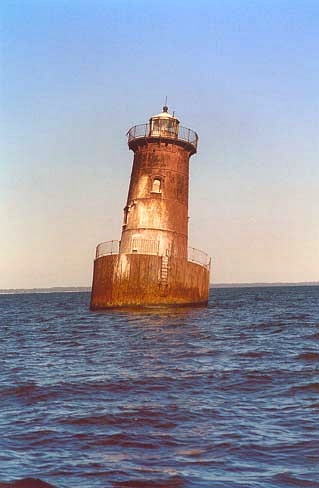 Sharps Island Lighthouse, a sharply tilted caisson structure that sits in ten feet of water warning seafarers of the shoals off Poplar Island and Black Walnut Point, is the third lighthouse with that name to serve the Eastern Chesapeake Bay area near the entrance to the Choptank River. The first lighthouse was actually situated on Sharps Island, which at one time comprised about 900 acres and was home to a thriving agricultural community. In the seventeenth century, the isle had three owners: William Claiborne, John Bateman and Peter Sharp, a Quaker physician whose name was applied to the island.

By the time the Lighthouse Service made plans for a navigational beacon on Sharps Island, the fate of the rapidly shrinking island was a foregone conclusion. That is why in 1837 Congress appropriated the relatively small sum of $5,000 to build an integrated and portable station, with the lantern built on top of the wooden keepers quarters. In 1848, the lighthouse was moved farther inland as the island continued to lose the battle with erosion. An 1850 inspection report noted that the plastering in the two-story dwelling was much cracked, but that this condition was not of much consequence as the structure was unoccupied save for the keepers son, who slept there at night to take care of the lights.

This early navigational aid exhibited a fixed light from ten lamps, set in fourteen-inch reflectors, until a fifth-order Fresnel lens was installed in the lantern room in 1855. In 1864, the Lighthouse Board noted: The light-house at Sharp's island, in Chesapeake bay, is in imminent danger of being destroyed by the washing away of the bank on which it stands. The district engineer is of opinion that it cannot possibly remain during the coming winter. He has therefore made arrangements to have a temporary light shown, on the destruction of the light-house.

The Lighthouse Board requested funds for a new lighthouse, but these were not granted until April 7, 1866, when Congress appropriated $15,000 for the task. Fortunately, the demise of the old lighthouse did not happen as soon as predicted. The unusual absence of storm-tides and heavy northwest gales during the past year accounts for the unexpected preservation of the present structure, the Board noted in 1865. The sea, however, is gradually but surely undermining the bluff, and has already reached one corner of the building, leaving no doubt as to the result.

The illuminating apparatus and all furniture were removed from the lighthouse in late October 1865, and no light was exhibited from the island between the first and fifteenth of November while a wooden tripod was erected for displaying a light from a steamers lens.

Miller R. Creighton, a wealthy Baltimore boot and shoe manufacturer, purchased Sharps Island in 1895 with two business partners and soon started construction of a hotel, even though the island was losing several feet of its surface area each year to the encroaching Chesapeake. The three-story hotel, adorned with six gables, overlooked a long boardwalk that led to a steamboat landing on the bay. By 1900, the steamboat pier was gone, and soon the hotel, like the islands old lighthouse, became a victim of the islands eroding shore.

While the temporary beacon shone from Sharps Island, the Lighthouse Board constructed a screwpile structure at a site four miles off Tilghman Island to replace the original Sharps Island Lighthouse. The screwpile lighthouse was completed in 1866, and during its first winter, it was severely tried by ice that was of unusual weight and strength, but managed to survive without any discoverable damage. In 1879, two of the lighthouses diagonal cast-iron braces were carried away by heavy drift ice, so a detached ice-breaker was placed about 200 feet south of the lighthouse, along the axis of the current. The ice-breaker consisted of three wrought-iron screw-piles, eight inches in diameter and nearly twenty-four feet in length, which were firmly braced and surrounded by two hundred cubic yards of riprap.

This defensive work, however, proved no match for the heavy, moving ice fields of February 10, 1881, which wrenched the lighthouse from its foundation and carried it away. The Board reported that despite the tragedy, there was no loss of life; the keepers remained on the wreck until it grounded; their conduct is highly commended. The two keepers stayed in the toppled lighthouse for sixteen-and-a-half-hours until it grounded on an island five miles away. Only then, when they were certain the structure would not drift off, did they row to shore. At low tide, the keepers returned to the lighthouse and removed the lens, oil, and even the stations library, which was much damaged by water.

Less than a month after the destruction of the second lighthouse, Congress provided a hefty $35,000 to build a cast-iron, concrete-filled caisson upon which a brick-lined, iron tower would be situated. The Board recognized that another screwpile was liable to be again destroyed by the heavy runs of ice so prevalent in Chesapeake Bay in severe winters, but were confident that the solidity and great weight of [a caisson structure would] be effective.

With loaded scows in tow, the lighthouse tender Tulip arrived at the site for the third Sharps Island Lighthouse on August 28, 1882, and over the next two days a work party constructed a platform for supporting the construction effort. The lower section of the caisson was launched from Oxford, Maryland on September 13 and towed to the site and sunk. The caisson, which had a diameter and height of thirty feet, was filled with concrete by November 2, after which work was suspended until the ironwork for the superstructure was received the following month. The thirty-seven-foot iron tower, which contained the keepers quarters and was topped by a ten-sided lantern room, was in place by the end of December, and after much finishing work, a fixed light produced by a Fresnel lens of French manufacture was displayed for the first time on February 1, 1882. When the keepers took up residence, the installation of the stations water tank and some other minor work still needed to be done.

In addition to its light, the tower also had a fog bell to help guide mariners. When it was found that spray from the waves below interfered with the operation of the fog bell, a small room was built on the stations lower gallery in 1890 to house the bells striking apparatus.

Jesse Marcellus W. Shockley had, by far, the longest stint as head keeper of Sharps Island Lighthouse, serving from 1904 into the 1930s. On more than one occasion, Keeper Shockley was commenced for assisting people in distress. In 1921, he towed the hydroplane Lady Baltimore, which was adrift about a mile off the station with two people aboard, to Cooks Point, and in 1928, he helped four men, whose motorboat broke down near the lighthouse. Sharps Island Lighthouse lost its last resident keepers in 1951, following automation of its light.

Although the sturdy caisson withstood the ice pressure far better than its screwpile predecessor, in the 1970s especially heavy winter ice gave Sharps Island Lighthouse its characteristic tilt. The list of about fifteen to twenty degrees appears quite precarious, but the structure is, to date, fundamentally sound. The inclination, however, was severe enough to require the removal of the Fresnel lens, which was replaced with a 250 millimeter plastic beacon. This new apparatus was placed on a leveling plate fastened to the lens pedestal, where it gives off a flashing white signal with a red sector used to mark dangerous shoals.

The Maryland Historical Trust conducted a detailed study of the tower and found that the iron plates of the caisson were cracked and corroding. This condition is due both to water leaking into the interface of the iron and concrete segments of the caisson, causing freezing and thawing damage, as well as a lack of paint to protect the structure. Water damage is not limited to the caisson only. A combination of an open door, unglazed windows and an uncovered coal chute have led to the rotting away of the first levels wooden floor and spalling of the towers brick masonry lining.

A wooden staircase leads from the first level and ascends along the curved walls to the upper floors that have unfortunately not escaped exposure and corrosion damage either. Poor ventilation, demonstrated by the seven porthole windows in the watchroom being glazed with unventilated acrylic, and exposure to the elements have contributed to the current condition.

In 1996, Lt. Edward Westfall, head of lighthouses for the Coast Guards Fifth District, pondered the wisdom of spending $8,000 on a paint job for the structure. Before we do that, we want to make sure were spending the money wisely, he said. We get into the question of should we maintain something that isnt being used. The Coast Guard contemplated demolition of the light, partly because of the precarious lean of the fifty-four-foot tower. While Lt. Westfall believed there is no immediate danger of the tower tumbling, another Coast Guard official expressed concern that it could possibly fall while personnel were inside.

Leading lighthouse expert F. Ross Holland remarked, Im not sure it would be a great loss if it were taken down. Its a nice old lighthouse, but there is nothing special about it or its history. Besides, he noted, there is another coffee-pot-shaped lighthouse nearby at Bloody Point. If one is to be taken away, Holland reasoned, there would still be one in existence. His comments could be construed as anathema to the sentiments of many lighthouse enthusiasts, who believe that all lighthouses are worth preserving. Plus, Bloody Point Bar Lighthouse was heavily damaged by fire in 1960, making it a non-ideal representative for this style of lighthouse.

To date, the light has neither been demolished nor fallen on its own. In 2006, the General Services Administration (GSA) posted a notice that Sharps Island Lighthouse was in excess to the needs of the Federal Government. This notice made the light available to federal or state agencies, non-profits, and historical preservation and educational institutions, but when no qualified owner was found, the GSA disposed of it via an online auction in 2008. Quite surprisingly, the winning bid, submitted on September 23, was $80,000, a significant amount considering that just a day before Borden Flats Lighthouse, which is in much better condition, sold for $55,000. The GSA noted in its Invitation for Bids that the lighthouse was physically inaccessible, the iron plates in the caisson were cracked and corroding, and the wooden floor on the first level was unstable. The new owner, who has been identified as AFB, Inc. of Bear, Delaware, has certainly assumed a huge undertaking but will hopefully be up to the task.

For a larger map of Sharps Island Lighthouse, click the lighthouse in the above map.

This lighthouse is best viewed from the water. We took a trip aboard Miss Kim with Captain Wade Murphy from Dogwood Harbor on Tilghman Island. Captain Murphy was very knowledgeable about crabbing and oyster dredging in the Chesapeake Bay and also owns the oldest Skipjack on the Chesapeake Bay, the Rebecca T. Ruark.


Captain Murphy was featured in a show on The Food Network shown during the spring of 2001. The show featured seafood of the Chesapeake Bay, and had a segment with Captain Murphy aboard the Miss Kim instructing the reporter on crabbing techniques.