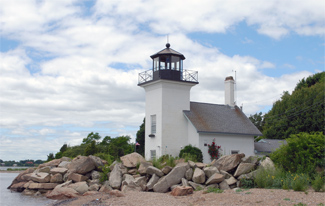 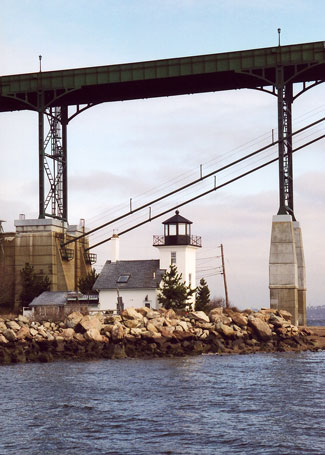 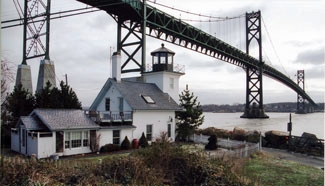 Bristol Ferry Lighthouse is located in Bristol Township under the Mount Hope Bridge, which spans the narrow passage linking Narragansett Bay and Mount Hope Bay. The diminutive lighthouse has been retired since 1927, when the overarching bridge made its light redundant. The structure is similar in design to other lighthouses such as Rhode Islands Nayatt Point Lighthouse as well as Sand Point Lighthouse in Escanaba, Michigan. The passage in front of the lighthouse was notorious among mariners, who pleaded for the establishment of at least one lighthouse there. William Brown, master of the steamboat Bay State argued eloquently in an 1853 letter to the Lighthouse Board: There is probably no locality in the country, certainly none within my knowledge, where a light-house is so much needed. Those of us who have to pass through this strait on dark and stormy nights, or else are brought to a stand in the attempt to grope our way through, realize that, as it is now, we are subjected frequently to a responsibility more weighty than to be placed on any one.

Captain Brown went on to explain that although his employer, the Bay State Steamboat Company, had established a lighted wooden tower on the point of Bristol Neck in 1846, this private light did not have the necessary elevation or brightness to help one safely navigate the channel. The Bay State Steamboat Company was chartered in 1846 and operated steamboat service from Fall River to New York City.

A ferry, known as the Bristol Ferry, commenced operation between Bristol and Portsmouth around 1680 and afforded the most direct route between Newport and Boston by way of Providence. The ferry ceased operating in 1865, when a railroad line opened between Fall River and Newport, but the name Bristol Ferry remained associated with the narrow passage linking Narragansett Bay and Mount Hope Bay.

The strait at Bristol Ferry was nearly 3,000 feet wide, but coming through from Narragansett Bay was especially treacherous due to Hog Island Shoal protruding into the passage on one side and Musselbed Shoals extending from the opposites shore. (Both of these hazards would eventually have lighthouses placed on them.) Congress responded to Captain Browns impassioned plea and approved $1,500 on August 3, 1854 for a lighthouse at Bristol Ferry.

The lighthouse consisted of a keepers house with an attached twenty-eight-foot-tall tower, both made of brick. The tower was topped with a wooden deck and lantern. The front door of the house was on the west side and opened to a narrow hall with stairs leading to the second floor. To the right was a six-foot-square room in the base of the tower. To the left was a sitting room that led to the dining room, and then to the kitchen. There were three bedrooms upstairs.

When the station opened on October 4, 1855, its beacon was a sixth-order lens that exhibited the light from an oil lamp through an arc of 220°. On the day of the inaugural lighting, E.B. Hunt with the Lighthouse Engineer Office in Newport notified the Lighthouse Board of the new lighthouse: The beacon-light at this place has been hitherto maintained on a wooden frame-work. No keepers house had been provided. I have to report the completion of the new house and tower, in a very satisfactory manner, and that the light is this night first exhibited on the new tower, at a distance of 53 feet N. ¼ W. of its old place, 4 ½ feet higher, and 30 feet above low water.

The first keeper of Bristol Ferry Lighthouse was George Pearse, who had sold the property for the lighthouse to the government for $100. He apparently didnt fancy his new occupation, as two months later Henry Diman became keeper. Diman had a short tenure at the lighthouse as well, dying less than a year after taking the position. His widow, Elizabeth, assumed responsibility for the light, but the only female keeper to work at Bristol Ferry Lighthouse served an even shorter time than her late husband, dying within six months.

In 1888, a copper ribbon lightning rod was placed atop the tower, and a new woodshed was built. A fifth-order Fresnel lens, which produced an omnidirectional fixed white light, was installed in the tower in 1902. When the original wooden tower and lantern were found to be rotten and not worth repairing, a cast-iron lantern was brought from the retired Rondout Lighthouse on the Hudson River in 1918. The brick tower was raised six feet when the new lantern room was added.

Edward Sherman had the longest stint as keeper of Bristol Ferry Lighthouse, serving from 1886 until his passing in 1916 at the age of seventy-four. At the time of his death, he was the oldest lighthouse keeper on Narragansett Bay. In March 1895, Keeper Sherman discovered a body floating in the water near the lighthouse. A newspaper account of the discovery speculated that the body was one of two men who went out gunning on Thanksgiving Day and hadnt been heard from since.

Bristol Ferry Lighthouse sat in a small depression that caused it to flood during storms almost every year. After a northeast storm buffeted the area on December 13 and 14 of 1917, Keeper Arthur Baldwin wrote in his logbook: NE to SSE gale. Heavy seas and high tide flooded station throughout the ground floor, 2-3 inches in depth, washed bulkheads and walks away. After that incident, inspectors from the Lighthouse Service visited the station and recommended that the floors be raised a foot and drainage in the area be improved. A month later, before any of the improvements could be made, the station was again flooded. Baldwin noted in his logbook: Station surrounded by water from rain flowing into the pond, causing a backup to surround the station. Cistern filled with water which made it unfit for use. Funds were allocated to relieve the situation, but it is unknown whether the floors were ever raised.

In 1927, while the Mount Hope River Bridge was being built above it, Bristol Ferry Light was retired. A steel tower temporarily took over navigational warning duties for the next few years, but was also retired after the bridge was finished. In 1929, the lighthouse, minus its lantern room, was put up for public auction by the Lighthouse Service, and sold to a local resident named Anna Santulli for a high bid of $2,050. This sum was much less than the propertys assessed value of $3,900, but the Lighthouse Service had heavily advertised the auction, and apparently felt that further advertising was not likely to bring any significantly higher bidding.

After the lighthouse had fallen into disrepair following years of neglect, new owners Robert and Carol Lundin refurbished the historic building during the early 1990s and installed a new mahogany lantern on the tower. The lighthouse was put up for sale with an asking price of $469,000 in 1999 and sold the following year. Bristol Ferry Lighthouse, which is listed in the National Register of Historic Places, remains a private residence today and is not open to the public. The lighthouse was sold in 2022 for $805,000.

Located under the northern end of the Mount Hope Bridge, on a point where Mount Hope Bay and Narragansett Bay meet.
Latitude: 41.64288, Longitude: -71.26028

For a larger map of Bristol Ferry Lighthouse, click the lighthouse in the above map.

From the northern end of the Mount Hope Bridge, take Old Ferry Road down to the foot of the bridge where you will see the lighthouse, now a private residence.