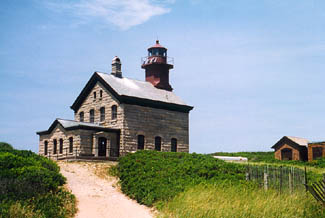 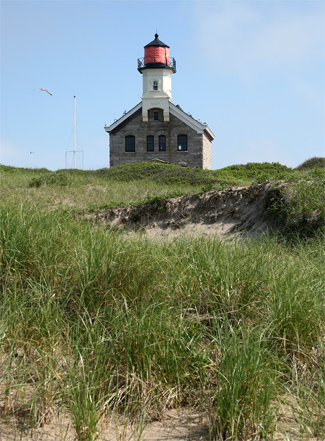 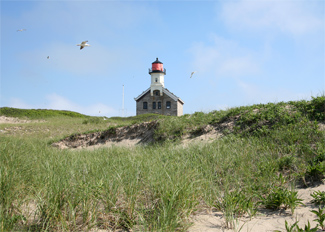 In the days of sail, long before mariners possessed the arrays of electronic navigational gear that are taken for granted today, the unseen hazards marked by lighthouses were considerably more dangerous to vessels. The sea, in those days, was by far the most efficient method of transporting people and goods, dangerous as it could be. Six-mile-long Block Island was an exceptionally treacherous place for mariners. In a twenty-year stretch during the early 1800s, thirty-four schooners, fifteen sloops, eight brigs, and two larger ships all ran aground on the rocks surrounding the island. Vessels transiting the passage between Point Judith and Block Island, the northern gateway to Long Island Sound, had to be mindful of a one-and-a-half-mile-long reef that extended from Sandy Point, the northern tip of Block Island. Navigational aids were established on each side of the passage to assist mariners. While the aid at Point Judith Point, first established in 1810, sat atop a relatively stable headland, the site on the northern tip of Block Island has historically been beset with problems.

Four lighthouses have been constructed on the northern extremity of Block Island. Congress provided $5,500 on March 2, 1829 for a lighthouse on the northwest point of the island, and later that year, the first Block Island North Lighthouse commenced operation. Unfortunately, the extremely unstable sand and gravel on the point were prone to rapid erosion, and the lighthouse was swept out to sea after just a few years. Congress allocated $5,000 on March 3, 1837 for rebuilding and changing the location of the light on Block Island, and a rectangular, granite keepers dwelling, with a light tower rising from each end of its pitched roof, was built about a quarter mile inland from the site of the first light. The design of this lighthouse was similar to the first, except the new one was built of stone rather than brick. The lighthouses two lights were aligned on a north-south axis, and mariners were warned that they might appear as one light until you are within two and three miles of them, depending on the angle of approach.

During an inspection of the lighthouse in July 1850, it was noted that seven lamps were being exhibited from each lantern room and that the lamps had each consumed just over thirty-five gallons of oil during the previous years. This equates to about a cup-and-a-half of oil being burned per lamp each night. Edward Mott was the keeper at this time, and he was apparently doing a good job as the inspector noted, Things are in a far better state than they were last year under the former keeper.

Lieutenant E.B. Hunt of the Corps of Engineers visited Block Island in October 1855 to investigate the judiciousness of spending $2,000 that had been appropriated for a beacon or spindle to mark the reef extending from Block Island. Hunt concluded that it was unwise to attempt the erection of any fixed structure on the reef, and instead recommended that a movable beacon be erected on the point north of the present lighthouse, and that a new lighthouse be built on lofty Clay Head, one-and-a-half miles southeast of the existing lighthouse, where a light could be more readily seen by mariners.

Hunts recommendations were not followed, and a new lighthouse was built on the northern end of Block Island in 1857. This structure took the form of a fifty-foot-tall granite tower with a keepers dwelling situated nearby. In 1865, piers were built to arrest the encroachment of the sea that was endangering the lighthouse, but still Congress was forced to appropriate $15,000 on July 28, 1866 so a fourth lighthouse could be constructed on a more eligible site. The foundations of the 1837 and 1857 lighthouses can reportedly still be seen out on the point.

The fourth and current lighthouse went into service on September 15, 1867. The two-story dwelling was built using Connecticut granite with a lantern-topped iron tower protruding from the northern end of the pitched, slated-covered roof. A fourth-order Fresnel was employed in the lantern room to produce a white light that was visible for up to thirteen-and-a-half miles.

Even though the lighthouse is several hundred feet from the tip of Sandy Point, it is still only two feet above mean high water. The building somewhat resembles a church or schoolhouse, showing Victorian and Gothic Revival architectural influences and is similar in design to several other lighthouses built on Long Island Sound around the same time, such as Morgan Point, Great Captain Island, Plum Island, Sheffield Island, and Old Field Point. Hiram D. Ball, who had been appointed keeper of the old lighthouse by President Abraham Lincoln six years earlier, took control of the new lighthouse and served there for twenty-four more years.

Being transferred to Block Island North was a relief to some keepers weary of the constant isolation of lighthouse life. While still in a remote location, at least fishermen came to the point frequently, people visited the lighthouse, and the keeper actually got a chance to get to know some of the islands year-round residents. When Elam Littlefield was transferred from the extremely isolated Whale Rock Lighthouse to Block Island North in 1891, he surely felt some of that relief, but unfortunately, it was to be short-lived.

When Eugene Rose, an island fisherman and carpenter, decided to put up a fishing shanty on the point near the lighthouse, Littlefield informed him that he was on government property and would have to remove the shack. A feud broke out between the two men that lasted for five years. Rose wrote to the Lighthouse Service accusing Littlefield of all sorts of corrupt and criminal acts, but when asked to provide proof, could not do so. The Lighthouse Service finally gave Rose a temporary license to put his shack on government property at an annual cost of $10, which he never paid. At times, Littlefield must have longed for the peace and quiet of Whale Rock.

The intensity of the light was increased on February 12, 1907 by changing the illuminant from oil to incandescent oil vapor.

Block Island North Lighthouse was automated in 1956 and deactivated in 1973, being replaced be a nearby light on a steel tower. The U.S. Fish and Wildlife Service acquired the station and surrounding land in 1973 for use as a wildlife refuge, but the lighthouse was left vacant and soon fell victim to vandals. The Town of New Shoreham established the North Light Commission with the aim of preserving the vandalized, rundown, and boarded-up lighthouse, and in 1983, an agreement was reached with the Fish and Wildlife Service wherein the lighthouse and surrounding two acres were given to the town for one dollar. In 1989, the light was reactivated, with a modern plastic lens serving as a beacon, and four years later, a small museum was opened on the first floor of the dwelling featuring the fourth-order Fresnel lens formerly used in the lantern room. Also on display were a workbench, chart box, and lunch pail used by Keeper Hiram Ball in the 1860s.

A 2001 inspection revealed that the iron tower was badly corroded, especially where it met the granite dwelling. To help offset the cost of repairs, the town was awarded $400,000 from the federal Transportation Enhancement Program in June 2002, and to this sum was added $100,000 from a State Preservation Grant in December 2006.

As the entire tower had to be removed, a temporary light was established on a short tower just north of the lighthouse. Some of the original corroded cast-iron elements were melted down and recast as new components, so that the lighthouses original DNA could be retained. The restored lantern room was painted black and the supporting tower white, replacing the non-historic brown daymark that they had sported for several years. After repairs were complete, the Coast Guard notified the public during a four-week advertisement period in September 2010 that the temporary light would be extinguished. When no objections were received, Block Island North Light was established as a private aid to navigation during a relighting ceremony held under a full moon on October 23, 2010. As part of the extensive restoration, the historic fourth-order Fresnel lens was restored to its proper place in the lantern room.

For a larger map of Block Island North Lighthouse, click the lighthouse in the above map.

Block Island is accessible via plane, ferry, or private boat. Ferry service is available from Point Judith, RI, Newport, RI, New London, CT, and Montauk, NY. Bikes, mopeds, and cars can be rented at the ferry landing. Note that companies like Old Harbor Bike Shop do rent cars even though it isn't obvious by their name. If you arrive by ferry from RI or CT, you will disembark at Old Harbor. Some rental companies are located in New Harbor and will pick you up at the ferry landing, but it might be more convenient to choose a company in Old Harbor.

Once on the island, Block Island North Lighthouse can be reached from the ferry landing in Old Harbor by going north on Water Street, left on Dodge Street, and then right at the 4-way Stop onto Corn Neck Road. Corn Neck Road will take you four miles to the northern end of the island, where you need to park and then walk northeast along the shore for about a half mile to the lighthouse. The lighthouse is home to a museum that is open weekends from Memorial Day to Columbus Day, 10 a.m. to 5 p.m., and daily from late June to mid-September. Call (401) 466-3213 for more information and to confirm hours.

The lighthouse is owned by the Town of New Shoreham and managed by the Block Island North Light Association. Grounds open, lighthouse open in season, tower closed.


This is an incredibly beautiful lighthouse and well worth the long walk through sand to reach it. Truth be told, I didn't complete the long walk myself, but fully appreciate why one would want to. :-)