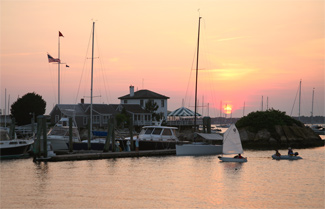 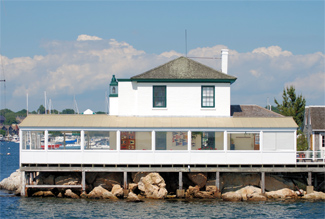 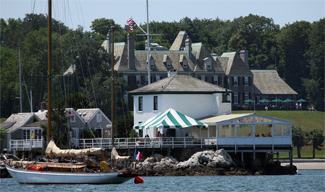 Ida Lewis Rock Lighthouse was originally known as Lime Rock Lighthouse, due to its location atop Lime Rock, about 300 yards offshore from the southern side of Newport Harbor. The first tower on the site was built of stone by Captain Dutton in 1854 and was serviced by Hosea Lewis, who rowed to the rock each day. As accessing the rock could be a nearly impossible task during winter storms, a one-room shack was constructed near the tower to serve as shelter for the keeper when he was unable to return to shore. In 1855, the Lighthouse Board recommended that a permanent keepers dwelling be added to the station, and that a ferry rope or foot-bridge be built between the rock and shore. A two-story Greek Revival-inspired dwelling was erected on Lime Rock the following year using granite and brick, and a brick tower was built into one corner of the structure for displaying the light form a sixth-order Fresnel lens. The stations present name comes from its famous female keeper, Idawalley (Ida) Zoradia Lewis, who was the daughter of Hosea Lewis, the lights first keeper. In 1857, Hosea Lewis had a crippling stroke, leaving the responsibility of minding the light to his wife Zoradia. Since Zoradia was busy taking care of her husband as well as an invalid daughter named Harriet, sixteen-year-old Ida eventually took over all duties at the station, becoming keeper in everything but name. Hosea and Zoradia had six children, including one from Hoseas first wife who had died. Ida was the third oldest child, but one of her older brothers had died and the other had left home by the time Keeper Lewis suffered his stroke.

Besides taking care of the demanding keepers chores, Ida Lewis ferried her younger siblings to shore each day so they could attend school, and she was also responsible for rescuing dozens of people from the frigid and dangerous waters near Lime Rock. Her first rescue was in 1858, when four boys sailing near Lime Rock capsized their small boat. Ida quickly set off in her rowboat and pulled them out of the water, one at a time, over her boats stern. Ida was soon a skilled rower. In fact, her brother Rudolph used to brag, Ida knows how to handle a boat, she can hold one to windward in a gale better than any man I ever saw wet an oar. Yes and do it too, when the sea is breaking over her!

Several of those she rescued were soldiers from Fort Adams attempting to return to base after a long evening of liquid refreshment in Newport. On March 29, 1869, Idas mother saw a boat capsize in the harbor and called for Ida to rush to its aid. Ida, who was suffering from a cold, sprang from her feet, leaving a cozy fire, and rushed from the dwelling without grabbing a coat. Two soldiers had started from Newport to Fort Adams under the guidance of a small boy, when their craft was swamped in the harbor. The boy perished soon after the vessel capsized, but the soldiers clung to the upset boat until they were rescued by Ida. Harpers Weekly featured an article on this heroic rescue, and Ida soon became nationally famous. The grateful soldiers sent her a gold watch, and the townspeople of Newport gave her a boat, christened Rescue, the following Independence Day, which was declared Ida Lewis Day.

An article in the New York Tribune of April 15, 1869 dubbed Ida the Grace Darling of America, an appellation that remained with her throughout her life. Grace Darling was a famous English heroine who helped her father rescue nine people from a shipwreck in the North Sea. Susan B. Anthony, who dedicated her life to woman suffrage, twice praised the contemporary Ida in her journal.

Ida received a silver medal from the Life Saving Benevolent Association in 1869, and was visited by President Ulysses S. Grant in 1875. In 1880, she became the first female to receive the gold medal for heroism from the Carnegie Foundation. In 1881, she was awarded a gold medal from the United States Lifesaving Service for saving two soldiers from Fort Adams. The two men had been walking across the frozen harbor back to Fort Adams from town when they broke through the ice. Hearing their calls for help, Ida ran across the ice and pulled them to safety with a clothesline.

When Ida was asked where she found the strength to accomplish her rescues she answered I dont know, I aint particularly strong. The Lord Almighty gives it to me when I need it, thats all. He can do anything you know.

Hosea Lewis died in 1872, and even though Ida had been keeper for years, it was the custom to appoint the keepers widow as a replacement, and Idas mother was officially given the position. In 1879, with the help of Senator Ambrose Burnside, Ida Lewis was appointed official keeper at Lime Rock Lighthouse when her mother retired. Ida didnt enjoy her celebrity status, which attracted as many as 3,000 visitors to the rock in just one month. Besides medals and a gold watch, Ida was also the recipient of a flag, a sewing machine, a silver teapot, and numerous marriage proposals. Ida married Captain William Wilson in 1870, but they separated after a short time.

Ida Lewis remained keeper until 1911, when her brother Rudolph found the seventy-two-year-old Ida lying on the floor in her bedroom. A doctor was summoned to the station from Newport, but Ida passed away two days later. In publishing a notice of Idas death, the Lighthouse Service noted that she had saved at least thirteen people from drowning and that she was perhaps the most widely known lighthouse keeper in the United States. Rudolph had assisted his sister with station duties for a number of years and remained at Lime Rock until Evard Jansen, the new keeper, arrived.

Jansen, who had previously been keeper of the North Hook Beacon at Sandy Hook, New Jersey, arrived in Newport with his wife, who shortly thereafter gave birth to a baby girl. Lighthouse people to the core, they named the new arrival Ida Lewis Jansen. A headline in the New York Times announced the First Baby of Lime Rock.

Keeper Jansen also had the opportunity to save a few lives while on duty at Lime Rock. In 1918, he rescued two men from a boat during a storm and took them and their provisions to their barges. Jansen remained keeper until the station was deactivated in July 1927, at which time he transferred to Gull Rocks Lighthouse.

The Lighthouse Service had a long-standing rule against naming a lighthouse after anything other than its geographical location, but in 1925 Commissioner of Lighthouses George R. Putnam officially changed the name of Lime Rock Lighthouse to Ida Lewis Rock Lighthouse.

In 1927, the light was transferred to a thirty-foot steel tower placed in front of the dwelling and automated. The following year, the 100-foot long, 80-foot wide Ida Lewis Rock was sold at auction for $7,200, and the buildings and grounds were transformed into the Ida Lewis Yacht Club. Around this time, a boardwalk was built connecting the mainland to the rock. The light atop the steel tower was switched off for good in 1963. In tribute to Americas best-known lighthouse keeper, the lighthouse that bears her name is lighted as a private aid to navigation during the summer months each year.

The original sixth-order Fresnel lens, which had been placed in storage at the Staten Island Lighthouse Depot, returned to the Yacht Club in 1932 and was displayed there for a while before being given to the Newport Historical Society. In 1995, the Coast Guard named the first of its new keeper class of coastal buoy tenders in honor of Ida Lewis. Appropriately, the Ida Lewis buoy tender is homeported in Newport. A documentary film entitled Americas Forgotten Heroine: Ida Lewis, Keeper of the Light, was released in 2014 and can be purchased on amazon.com.

For a larger map of Ida Lewis Rock Lighthouse, click the lighthouse in the above map.

The lighthouse is now part of the private Ida Lewis Yacht Club, but it can be viewed from a pier adjacent to the yacht club. To reach the pier, take Thames Street south out of Newport, and then turn right onto Wellington Avenue. The pier will be on your right. A boat ride is necessary to get a good view of the actual light, located on the west side of the structure. Rhode Island Bay Cruises offers a 10 Lighthouses of Narragansett Bay cruise that passes by the Ida Lewis Rock Lighthouse. Save the Bay offers lighthouse cruises that pass the lighthouse.

Ida Lewis' gravesite is located in the Common Ground Cemetery in Newport on Farewell Street between the Newport Bridge and the causeway that leads to Goat Island. To find the gravesite, go to the southwest corner of the burial grounds. There you will see street signs in the cemetery. Ida Lewis' tombstone is located near the intersection of Clarke and Holmes.

The lighthouse is owned by the Ida Lewis Yacht Club. Grounds/dwelling closed.