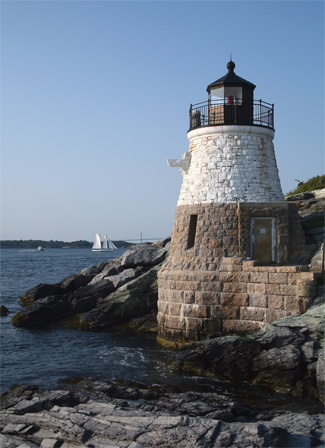 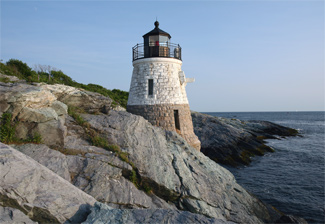 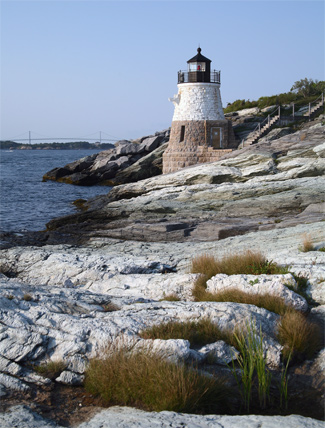 Applications have been made at various times in the past, and renewed this year, for a light-house and fog-signal on Castle Hill, to guide vessels, especially in thick and foggy weather, into Newport Harbor and Narragansett Bay. After a careful examination of the locality, and a full consideration of the whole subject, it is recommended that an efficient fog-signal be authorized for this point, which it is believed will, with the existing lights and other aids to navigation in the immediate vicinity, subserve the desired purpose.

In 1870, the Lighthouse Board estimated the lighthouse would cost $18,000, but then the following year, it cancelled its request and instead recommended that a steam fog signal be built at Beaver Tail Lighthouse, situated about two miles west of Castle Hill.

The Lighthouse Board changed its mind once again, and in 1875, Congress approved $10,000 for a fog signal at Castle Hill. A site was chosen, but the owners of the land had, within the past year, erected summer cottages nearby and refused to sell, fearing that a fog signal would depreciate the value of their property. Condemnation proceedings were considered but not pursued as the likely valuation of the land would have exceeded the amount of the appropriation. After two years of attempting to acquire the property and unsuccessfully looking for alternative sites, the Lighthouse Board considered placing a whistle buoy off the point instead, but the position was so sheltered that the effectiveness of such a buoy was in doubt, and it was never installed.

In the late 1880s, the Lighthouse Board resumed its attempts to build a signal at Castle Hill, and this time they were able to obtain separate sites for the lighthouse and keepers dwelling from the famous naturalist, oceanographer, and zoologist Alexander Agassiz, who sold the land for one dollar. Construction, however, was delayed when Agassiz refused to grant contractor William T. Wilbur a right-of-way through his property. Since the construction site was on a steep rock face, it was basically inaccessible by water.

Agassiz detailed his objections in a letter to the Third Light House District. It is impossible for me to make any further concessions in the matter of the light house. What with one thing and another I stand an excellent show of having my place ruined and nobody to foot the bill. I must protect myself of all hazards. I have signed a deed to the U.S. on the only terms which I will agree to and if the Government cannot carry out its part of the programme I shall take the necessary steps to re-enter the land. I dont feel called upon in any way either to be guided by the interest of navigation or of the public to ruin a place upon which I have spent a great deal of money, the more so as I feel and have always felt that had the Light House Board met my objections there would have been no need of a light on Castle Hill and the transfer of the Brentons Reef Light Ship to a straight range with Rose Island would have given all the possible safety needed for so short a run. It took almost two years of negotiations before Agassiz finally relented and deeded a 1.98-acre right of way.

This was not the last time the Lighthouse Board heard from Professor Agassiz. The new light station commenced operation on May 1, 1890, but the fog bell was discontinued on November 39, 1891, after Agassiz complained about the terrible noise. Just over four years later, on February 27, 1896, a 1,286-pound fog bell was placed in operation at the station, and shortly after that a mighty 2,400-pound was mounted on the tower. When the signal resumed operation, so did Agassizs protests. The Light House Board has not treated me fairly in the matter of the Bell at Castle Hill and had not kept their agreement with me, Agassiz complained. The matter was finally resolved in 1898 when a screen was erected to deflect the sound seaward.

The handsome Castle Hill Lighthouse is built right into a cliff face, and almost appears as a natural feature of the landscape. It is believed the design was by the influential architect Henry Hobson Richardson, who was also responsible for Bostons Trinity Church and Buffalos New York State Asylum. The granite tower stands thirty-four feet tall and originally exhibited a flashing red light from a fifth-order Fresnel lens. The keepers house had six rooms and an attached kitchen, and was set back about a quarter mile from the tower in Castle Hill Cove. Some sources claim the dwelling was destroyed in the hurricane of September 1938, but it is actually still in place, though slightly modified.

The first keeper at Castle Hill was a Connecticut native named Frank W. Parmele, who was transferred from Saybrook Breakwater Lighthouse. Parmele took a drop in wages with the move, going from $540 to $520 per year, but presumably that was offset by the huge convenience of being on duty at a land-based station. George L. Hoxsie replaced Parmele as keeper of the light in 1911 and served at the station for over thirty years. In 1916, Keeper Hoxsie was recognized for rescuing a disabled launch owned by Newports harbormaster, and in 1922 Hoxsie was awarded the efficiency flag for having the best-kept station in the district.

On May 5, 1945, just two days before Germany surrendered to the Allies, Manuel Soares Macedo, keeper of Castle Hill Lighthouse, witnessed the sinking of the 396-foot-long SS Black Point after it was struck by a torpedo. Twelve men perished in the explosion and sinking, but their deaths were revenged when depth charges crippled and destroyed U-boat 853 before it fled the area. The Black Point was the last U-boat victim of World War II for the United States. The propellers from U-853 were on display at Castle Hill for many years, but are now located at the Newport Naval Station.

The original beacon employed at Castle Hill was a kerosene-powered fifth-order Fresnel lens, and in 1899, a set of new model fifth-order lamps were given to the keeper. That same year, the upper half of the granite lighthouse was painted white to make it more obvious to mariners in the daytime. A modern 300-mm plastic lens replaced the Fresnel lens when the station was automated in 1957.

Castle Hill Lighthouse is a solidly built structure, and has needed little more than routine care and maintenance over the years. The original wooden stairs were replaced by concrete steps in 1992. Castle Hill Light remains an important active aid to navigation, showing a flashing red light every thirty seconds, and has been used countless times as a beginning and ending point for the famous yacht races taking place in Newport.

Although the lighthouse itself is not open to the public, the grounds are easily accessible by footpaths in the area. If you can afford it, you can stay nearby at Castle Hill Inn, which was formerly the cottage/laboratory of Alexander Agassiz. The lighthouse is listed in the National Register of Historic Places, and a fog bell reportedly used at the station can be seen at the coast guard station in nearby Castle Hill Cove.

For a larger map of Castle Hill Lighthouse, click the lighthouse in the above map.


While in Newport, do take some time to visit some of the numerous historic mansions. Even if you don't have time for a tour, a drive down Bellevue Avenue is quite amazing. During one trip, we were in Newport during the Christmas Holiday and took a tour of The Breakers, which was decorated for the season. The Vanderbilts surely had some nice residences. Visit The Preservation Society of Newport County for information on touring the mansions.

Castle Hill Lighthouse can be seen in the quirky movie "Moonrise Kingdom."