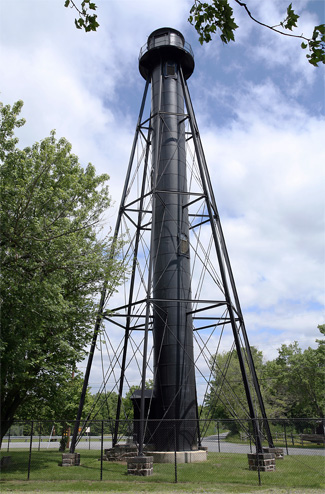 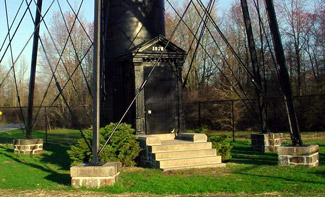 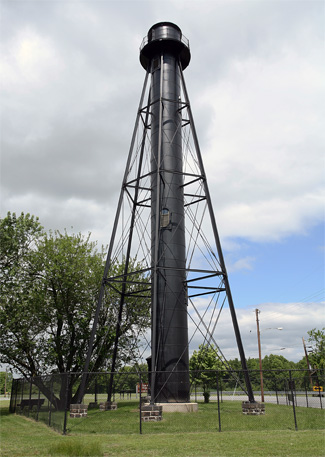 Soon after the 1638 landing of Finnish colonists near the present site of Wilmington, Delaware, small groups of settlers crossed over to the east bank of Delaware River, where the land was thought to be more fertile, and established farms. One group selected land near the sweeping turn in Delaware River, and this area remains known to this day as Finns Point.

By an act of Congress in 1875, $55,000 was set apart for two pairs of range lights to help vessels transition from Delaware Bay into Delaware River. Port Penn Range, located in Delaware, would guide traffic along the shipping channel from Ship John Shoal to Reedy Island, while Finns Point Range would help vessels continue upriver, passing between Reedy Island and Baker Shoal.

Lieutenant Colonel William F. Raynolds of the U.S. Army Corps of Engineers oversaw construction of the front and rear range lights at Finns Point. The front light was located near the banks of Delaware River and was displayed from a frame dwelling of the following description: one and one half stories high with shingle roof, double weather-boarded on outside and lathed and plastered inside. It rests on stone walls founded on wooden piles. The first story is divided into three rooms, with hall and stairways to the second floor and cellar, and shed over back door; porch and bay-window in front; the second story is divided similarly to the first; with step-ladder to lantern on the third floor; a gallery supported by brackets surrounds the lantern on front and sides.

The illuminating apparatus for the front light was a fourth-order range lens manufactured by Barbier & Fenestre in Paris, which focused the light from a fourth-order Funk Heap lamp with one wick. In 1882, a wooden screen painted white, with open spaces so as to show horizontal stripes was placed atop the front lighthouses red lantern room to make the structure more conspicuous during the day. This daymark was removed in 1897.

The front light was originally fixed white, but on October 31, 1894, its characteristic was changed to two seconds of light followed by one second of darkness. This was accomplished by an eclipser, powered by a weight suspended from the lantern room, which raised and lowered a cylindrical shade around the light. The keeper was required to wind the weight every six-and-a-half hours to keep the eclipser functioning.

Three acres of land, located roughly one-and-a-half miles inland from the front light, were purchased from Joshua and Mary Dickinson on April 20, 1876 as the site for the rear range light. To provide a focal plane higher than that of the front light, the project plans called for a tall, wrought iron tower to be used for displaying the rear light. The Kellogg Bridge Company of Buffalo, New York was contracted to manufacture the components of this wrought iron tower, which were then transported to Salem, New Jersey by railcar. From Salem, teams of mules pulled large wagons loaded with pieces of the iron tower to the construction site.

The tower was described in the Description of Lighthouse Sites of the Fourth Lighthouse District as: 94 feet 8 and one half inches high from base to the focal plane. It is of wrought-iron, braced and supported by beams and tie-rods; the shell of the tower is of one quarter inch sheets of iron, riveted together, with the necessary openings for windows; it is 8 feet in diameter; and lined on the inside with vertical tongue-and-grooved boards; it encloses a cast-iron spiral stairway leading to lantern and watch-room. The posts supporting the tower are of 9-inch I beams, braced together with 5-inch I beams and rods from one and a half to one inch in diameter. The posts have an inclination of 1 horizontal to 6 vertical; they are held to masonry piers 6 feet deep by bolts, two at each post, attached to a wrought-iron plate under the piers. The tower is entered through a cast-iron vestibule one story in height.

The supporting posts have a hexagonal foot print, and the number of stairs to the top of the tower is 130: 119 steps in the spiral staircase and 11 steps up a ladder to the lantern room. Each evening, the keeper would climb the tower and light the lamp that stood behind a twenty-four-inch, fourth-order range lens also manufactured by Barbier & Fenestre. In addition to displaying the fixed white rear light for Finns Point Range, the tower began exhibiting a second light in a different direction on October 1, 1884. Produced by a lens lantern panel and visible over a 30° arc, this light indicated the turning point for vessels transitioning from New Castle Range to Deepwater Point Range  two range lights located just up the river. A ruby-colored pane placed in front of this secondary light, made it appear red to mariners. The red sector was discontinued in 1927.

A frame keepers dwelling was built just west of the tower, along with a wood-framed privy and an oil house. The first keeper of Finns Point Rear Range Light was Edward Dickinson who started serving on December 8, 1876 even though the light was not lit until April 2, 1877. Over the next thirty years, Dickinson never received a raise; his salary was held constant at $500 per annum. Dickinson served until his death on December 21, 1907, and the following day his wife took over as acting keeper until Charles W. Norton transferred from Finns Point Front Range on January 22, 1908.

The final keeper of the rear range light was Milton Duffield, who served from 1916 to June 10, 1933, when the lights were discontinued. At the request of river pilots, the lights were re-established the following season, but automated beacons were installed so no new keepers were hired.

The area surrounding the front range light was prone to flooding during storms, and according to the Lighthouse Boards annual report in 1878, the river formed an eddy immediately in front of the dwelling in which all the filth of this section of the river collected. To make matters even worse for William S. White, the first keeper of the front light, there was an ugly swamp hole reeking with miasma behind the dwelling. The front dwelling was raised nearly three feet in 1879, and the surrounding land was drained and graded.

A stone sea wall, twelve feet high and 476 feet long, was built near the front dwelling in 1900, but by 1938 the site was often inundated at high tide. Rather than maintain a dated structure in these marshy conditions, a skeleton tower was built atop a concrete base just offshore from the former lighthouse in about three feet of water. Powered by batteries, the beacon on the new tower was activated on June 9, 1938, and the following year the dwelling, that had formerly housed the front light, was razed.

In 1950, the Army Corps of Engineers dredged the Delaware River channel serviced by Finns Point Range to a width of 180 feet and a depth of 40 feet. The range lights were deemed unnecessary as Reedy Island Range to the south could now cover this wider section of the channel, and Finns Point Range Lights were deactivated for good on March 22, 1950.

The tall rear range tower and its accompanying dwelling sat abandoned for years and were often the target of vandalism. Graffiti adorned the bottom portion of the tower, and more than once, arson fires were set in the dwelling. In 1977, the old dwelling, now unsafe, was razed, but not everyone was ready to see the entire Finns Point station lost. Betty Husarik formed a Save the Lighthouse Committee in the 1970s, and soon locals showed interest in moving the lighthouse to a nearby park for its centennial. The project faltered, but the group did succeed in placing the tower on the National Register of Historic Sites in 1978.

In 1981, the committee, armed with the signatures of 1,100 people desirous that the tower be preserved, set off for Washington D.C. by bus to pay Congressman William Hughes a visit. This drive resulted in a contract for $33,600 being signed between the U.S. Fish and Wildlife Service, on whose land the tower now stood, and the K&K Painting Company of Baltimore to have the tower repaired, sandblasted, and painted. An open house was held at the tower on October 14, 1984 to honor the determined effort shown by the Save the Lighthouse Committee and others in restoring the tower.

Today, there are informational signs displayed at the site. The tower was opened to tours one day a month, but this ended in 2006 due to budget cutbacks. The only other surviving structure from Finns Point Range is a brick oil house with a terra cotta shingle roof at the front light. The site of the front light is only accessible by boat, but one can drive down the road from the rear tower to Fort Mott State Park to view the area of Delaware River formerly served by Finns Point Range Lights. In 2004, a recreation of the keepers dwelling was completed near the lighthouse to serve as an office for Supawna Meadows Wildlife Refuge.

After the lighthouse had been closed to the public for several years, the Fish and Wildlife service had the tower refurbished and painted, allowing open houses to resume in 2013.

For a larger map of Finns Point Range Lighthouse, click the lighthouse in the above map.

From Highway 49 south of Pennsville, take Fort Mott Road south for 1.7 miles to Lighthouse Road, where you will see the light. The lighthouse is open the third Sunday of the month, March - May, and September - November. Call (609) 463-0994 to confirm.

The lighthouse is owned by the U.S. Fish and Wildlife Service and is part of Supawna Meadows National Wildlife Refuge. Grounds open, tower open.