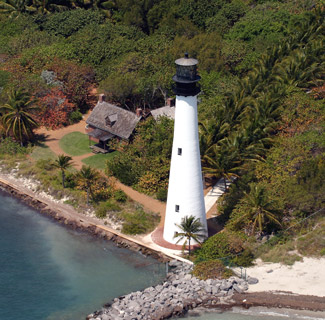 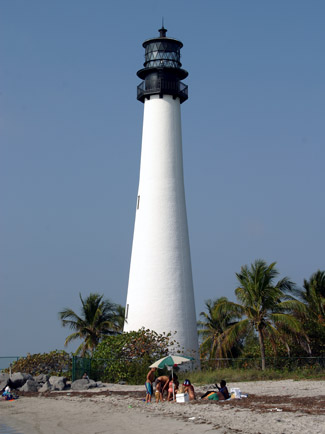 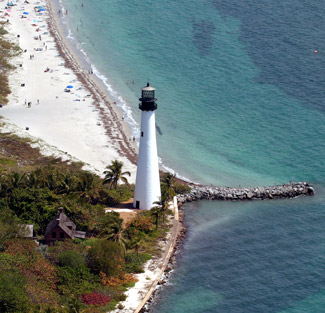 Looking at the peaceful sunbathers and picnickers relaxing on the white sands surrounding Cape Florida Lighthouse, one would have a hard time picturing this as the site of violence, treachery, and bloodshed galore. However, the eighteenth century found the beaches of Key Biscayne the happy hunting grounds of marauding pirates, wreckers, and bands of Indians. One especially notorious pirate, Black Caesar, terrorized this coast until he was caught and hanged in 1718. Over these precarious shores the rays from the fifteen lamps in Cape Florida Lighthouse first shone on December 17, 1825, but not without difficulties that foreshadowed the drama to come. Three years earlier, in May 1822, Congress had appropriated $8,000 to build a lighthouse on Cape Florida as soon as the needed land had been ceded to the federal government. To this amount was added another $2,790.85 in the spring of 1824. That July the contract for Cape Florida Lighthouse and two other lighthouses in Key West and Dry Tortugas was awarded to Samuel B. Lincoln of Boston. With his plans and materials, Lincoln set sail in August from Boston bound for Florida, but neither he nor any of his crew was ever seen again. It is assumed his ship sank, leaving no survivors.

Noah Humphreys took over the project, and by the end of 1825 the sixty-five-foot brick tower with wood stairs was completed at Cape Florida, and John Dubose was appointed to serve as its first keeper. Dubose moved his wife, five children, and two former slaves who had belonged to his wifes brother to Key Biscayne, where they became the first American family to take up permanent residence. The stations isolation was stressed in a letter from Keeper Dubose to Stephen Pleasonton, pleading for a boat. ...the situation of this light is far different from that of any other on the American coast, he wrote. There is no one so far removed from a settlers part of the country and where a Keeper has to send so far for his supplies... The lighthouse would not be immune to the desperate conflicts and battles that were forming the area as part of the Second Seminole War.

On July 23, 1836, a band of Seminole Indians attacked the tower. Keeper Dubose was in Key West visiting his family, who, along with others, had removed there earlier in the year when hostilities with the Indians became particularly threatening. Only Assistant Keeper John W.B. Thompson and Aaron Carter, a Negro handyman, were at the lighthouse when the Seminole arrived in a wave of bullets. Thompson and Carter barricaded themselves inside the tower and then retreated to the top after the Indians set fire to the door which spread thanks to oil that was leaking from storage tanks perforated by the gunfire. Prudently, they brought with them muskets and a keg of powder, but their weapons did little to shield them from the intense heat of the burning stairs and the flying glass from the rupturing panes in the lantern room.

As the flames increased, the two men were forced outside onto the two-foot-wide balcony. Carter was killed in the fight and Thompson, already shot in the foot from the initial onslaught, was wounded again. In this desperate situation and with his clothes on fire, Thompson threw the keg of powder down into the flames, hoping to end his misery. The explosion, however, did not kill him, but it did destroy what was left of the burning staircase, which lessened the waves of heat rolling over the semiconscious Thompson, who had collapsed on the balcony.

This blast did more than remove the burning staircase; assuming Thompson was dead, the Indians turned their attention to pillaging the keepers house and then left, while a Navy vessel, hearing the explosion, came to shore to investigate. By the next day, the crew had discovered the burned lighthouse and the wounded assistant keeper, stranded high above the ground. The resourceful captain managed to rescue Thompson by firing twine from his musket, which Thompson caught and used to pull a heavier rope up the tower. Using the rope as a kind of pulley, two seamen were able to hoist themselves up the tower and help Thompson descend. Click here to read Thompsons account of the attack.

The threat of further Indian hostilities prevented the re-establishment of the light for more than ten years. Although Congress appropriated $10,000 in 1837 to rebuild Cape Florida Lighthouse, when the workmen and supervisor arrived on site, they found that hostile Indians were in entire possession of the adjacent country and a navy captain had recently been murdered. As a result, the lighthouse remained out of service until 1847, when it was rebuiltthis time with iron stairswith a $13,000 appropriation made by Congress on August 10, 1846.

The excitement on the Cape was far from over. In 1851, Lieutenant George G. Meade was sent to investigate lighthouses along Floridas reefs and give recommendations for improvements. Later, Lt. Meade would rise to fame as General Meade, commander of the victorious Army of the Potomac at Gettysburg, but not before Cape Florida Lighthouse rose to ninety-five feet and was equipped with a new second-order Fresnel lens in 1855 as a result of Meades recommendation. Congress appropriated $15,000 on August 3, 1854 for the work of elevating the tower and fitting it with the most approved lighting apparatus.

On January 19, 1861, Florida seceded from the Union, and one night in August of that year, the lamp was removed from the tower and the prisms of the lens were smashed by a trio of southern sympathizers, so the lighthouse could not be used to help the Union sailors controlling the surrounding waters.

After the Civil War, Cape Florida Lighthouse was repaired and placed back in service on April 15, 1866, but again, its fate was far from certain. It was again extinguished on June 15, 1878, this time because the offshore Fowey Rocks Lighthouse had replaced it. By the 1920s, the nearby coastline had eroded so much that the lighthouse, originally 100 feet from shore, now stood only ten feet from the water. Tropical storms had also destroyed the keepers house and cookhouse. Rejected twice as a historic landmark by the Federal Government, the lighthouse was finally purchased, along with the tip of Key Biscayne, by the State of Florida in 1966. In January 1967, the park, which would be named Bill Baggs Cape Florida State Park in honor of the news editor who had spearheaded the campaign to save the lighthouse, was opened.

One hundred years after Cape Florida Lighthouse had been extinguished, it was re-lit on July 4, 1978. The rest of the station was also brought back to life, as the keepers dwelling, outhouse, cookhouse, and cistern were all rebuilt. It appeared to be a happy ending for the beleaguered lighthouse, but in August 1992, Hurricane Andrew caused major damage to the tower. Once again the tower was extinguished and needed extensive repairs; the state again came to the rescue, restoring it in time for Miamis Centennial Celebration in 1996.

Just to the side of the booth where you pay your entrance fee to Bill Baggs State Park, stands a ventilator that probably once sat atop the lighthouse. After you park and walk to the entrance gate to the light station, you will see an old lantern room, probably designed by George Meade, that used to adorn the tower. Inside the lighthouse property, you will find a replica of the keepers cottage burned by the Seminole, which contains displays depicting early life on the island. With the only visitors to the lighthouse now being tourists and state employees, perhaps Cape Florida Lighthouse faces a more placid future.

For a larger map of Cape Florida Lighthouse, click the lighthouse in the above map.

The lighthouse is owned by the State of Florida. Grounds/tower/dwelling open during tours.


The spiral staircase inside the lighthouse is quite unique. Unlike the staircases found in most other lighthouses, this one is not attached to the exterior walls for a good portion of the climb. This makes for an interesting trek as the staircase tends to move a little. However, the fresh breeze and beautiful view that await you at the tower's top are well worth any queasy feelings you might experience during the ascent.

Cape Florida Lighthouse has appeared in at least four movies including Clambake with Elvis Presley.