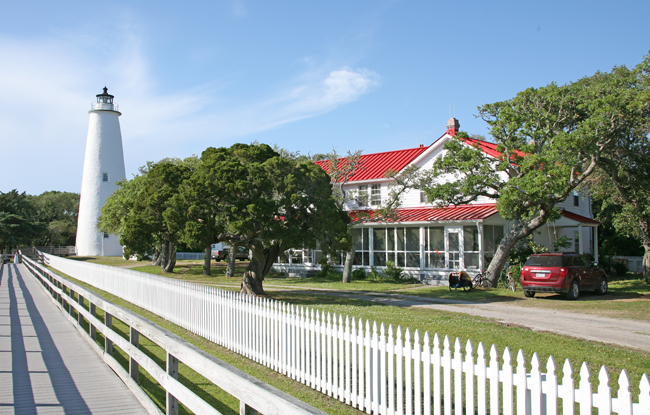 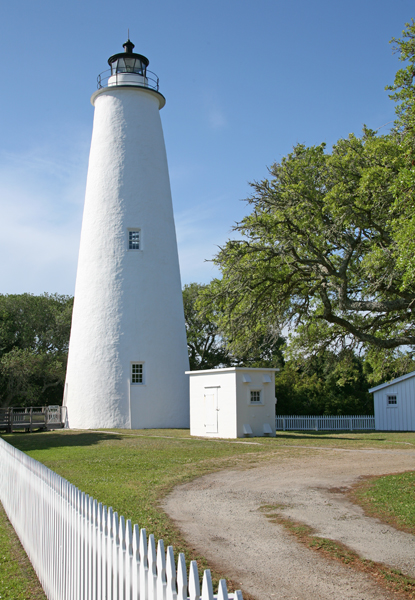 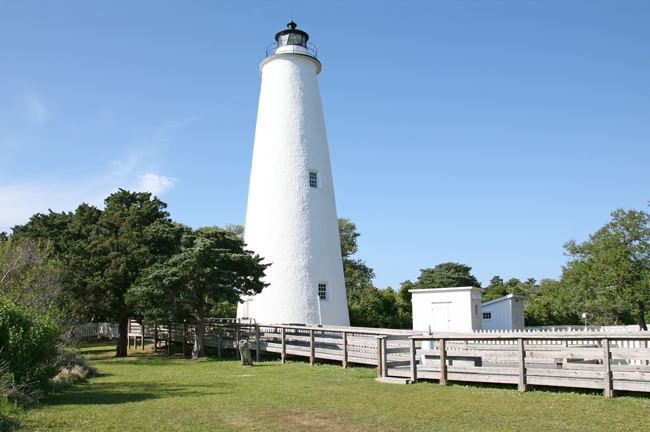 Ocracoke Lighthouses modest height (seventy-five feet), subdued color scheme (solid white), and tranquil setting (a small island on the east side of Ocracoke Inlet) belie the dramatic history of its surrounding area. The calm waterway that today carries pleasure boats and small fishing craft witnessed its share of treachery, heroism, and adventure long before the lighthouse stood sentinel over the inlet.

Ocracoke hardly had an auspicious beginning; it was put on the map after an English sailing ship was wrecked on the shoal-ridden inlet in 1585. But its eventual useful role as a waterway access to various inland ports pales in comparison to the high drama played out in its waters. True, the gifted and dashing Sir Walter Raleigh landed on Ocracoke at least once during his explorations of the new world, but the real excitement came from another reckless Englishman  Edward Teach, better known as Blackbeard, the most ruthless and dreaded of pirates.

By 1718, Blackbeard had come to regard Ocracoke as his favorite anchorage. He even reportedly had a house on the island, which he intended to use as a sort of pirate haven. The coastal citizens, understandably unenthusiastic about the prospect, bypassed their useless Governor Eden and appealed instead to Governor Spotswood of Virginia. Help came in the doughty figure of Lieutenant Robert Maynard of the Royal Navy, who brought with him two small sloops. An intriguing, though probably unreliable, legend claims that Blackbeard, knowing the sloops were nearby and eager to engage them in battle, spent the night before the fight impatiently crying out O crow, cock! O crow, cock!, which is how the inlet got its name.

Though accounts vary as to how the battle started, all agree on its outcome. One of Maynards sloops ran aground, and Blackbeard gained on the Ranger, the sloop Maynard was aboard. Under heavy fire and unable to either return fire or escape, Maynard ordered his troops below deck. In a move worthy of a TV movie of the week, Blackbeard personally led the charge aboard what appeared to be a foundering and deserted ship, only to meet Maynard and his pistol face to face. Blackbeard attacked, but not before being grazed by the pistol and suffering a deep wound to his neck. The fight raged, with Blackbeard suffering more than thirty major wounds. Finally, Maynard prevailed, and as Blackbeard fell dead at his feet, the Royal Navy Lieutenant cut off the pirates head and fixed it on the bowsprit. Blackbeards headless body was flung overboard, where it reportedly swam around the Ranger three times before sinking to its doom.

After the pirating subsided, trade increased. As inland ports such as New Bern, Elizabeth City, and Edenton grew, the need for a lighthouse to help mariners navigate the passage between Ocracoke and Portsmouth Islands that led to these towns grew accordingly. In 1798, a wooden pyramid-shaped tower was completed on Shell Castle Island, situated in the middle of the passage. However, the light was inadequate, and the sand bars changed so much that by 1818 the lighthouse was a mile away from the inlet. In a rather dramatic ending, both the lighthouse and the keepers cottage were consumed in 1818 by a fire started by a lightning strike.

On May 7, 1822, Congress set aside $20,000 for a lighthouse on Ocracoke Island, and the federal government shortly thereafter purchased two acres and commissioned Noah Porter of Massachusetts to build a tower and keepers cottage. The lighthouse was to be coated with an unlikely formula of lime, salt, ground rice, whiting, and clear glue, which was mixed with boiling water and applied to the bricks while hot. Porter completed the project the next year, for $11,359, considerably less than the sum the government had budgeted. Such happy efficiency turned out to be indicative of the useful, relatively uneventful life of Ocracoke Lighthouse.

In 1849, the lighthouse was equipped with a new lantern room and lighting apparatus, which consisted of ten brass lamps and twenty-one-inch reflectors instead of the fifteen that had been used before. The apparatus revolved every two minutes to produce a flashing light. The characteristic of the light was changed to fixed white in 1854 through the installation of a fourth-order Fresnel lens.

The lighthouse survived the Civil War with minimal damage; Confederate troops dismantled the fourth-order Fresnel lens in 1862, but Union forces re-installed it the following year. The light was electrified in the early 1900s and today casts a stationary beam visible for fourteen miles.

The original keeper's dwelling consisted of a one-story, three-room structure with a gable roof. In 1897, the roof was removed and a second story added, providing an additional three comfortable rooms. Another addition was built in 1929 to create a double dwelling. An oil house, constructed of reinforced concrete and equipped with iron doors and ventilators, was added to the station in 1914.

Because the lighthouse and keepers cottage are built on relatively high ground, they have served as a refuge for local residents during hurricanes. One example of this occurred in October 1913, when a hurricane struck the Outer Banks. Wesley Austin had just taken charge of the light, after having served as first assistant at Currituck Beach Lighthouse since 1893. Keeper Austin was commended by the Lighthouse Service for saving government property and giving shelter to island residents during the storm.

Wesley and Isabelle Austin had eight children. Ruby, the seventh child, was born at Currituck Beach Lighthouse in 1906 and was still living near Ocracoke Lighthouse in 1997, when she was interviewed about her father. She clearly remembered the storm of 1913: "The waves were terrible. The boats washed up on the island over the fences around the lighthouse." Keeper Wesley had a palsy condition that made his hands shake. "Papa drank 'postum,' you know what postum is?," Ruby asked her interviewer. "It's coffee. And he never lost a drop." The palsy condition also didn't prevent Keeper Wesely from performing his lighthouse duties, for he was awarded the efficiency flag for having the best-kept station in the district in 1922.

When water began flooding her home during a hurricane in 1944, Daisy Gaskill put her one-year-old son in a skiff and rowed to Ocracoke Lighthouse to seek protection behind its five-foot-thick brick walls. During her many years on the island, Daisy never once left for a storm.

Ocracoke Lighthouse was switched off in November 2009 and remained dark until March 3, 2010 while new glass was installed in the lantern room, metalwork was repaired, and lightning protection was installed. This was the first major work performed on the lighthouse after it had been transferred from the Coast Guard to the National Park Service in 1999.

As one of the oldest operating lighthouses in the country, Ocracoke Lighthouse is of historical interest, and the grounds around it and the keepers cottage are open to the public. Although the days of piracy, exploration, and heavy trade in Ocracoke Inlet are over, the islanders distinctive accent, known as the Ocracoke Brogue, is one of the most well-preserved of early-American speech, and gives visitors a taste of how the language of Sir Walter Raleigh and Blackbeard would have sounded.

For a larger map of Ocracoke Lighthouse, click the lighthouse in the above map.

Ocracoke Island can be reached by a free ferry from Cape Hatteras or via a longer ferry ride from either Cedar Island or Swan Quarter. Click here for ferry schedules. From either ferry landing, take Highway 12 into the village of Ocracoke and turn south on Lighthouse Road. The lighthouse will be on your right after several blocks.

The base of the tower is typically open to the public during the summer on weekdays from 1 to 3, while the keeper's dwelling is used by the National Park Service for housing. There is a boardwalk that runs along one side of the lighthouse property from which good views are possible.

The lighthouse is owned by the National Park Service. Grounds open, dwelling/tower closed.