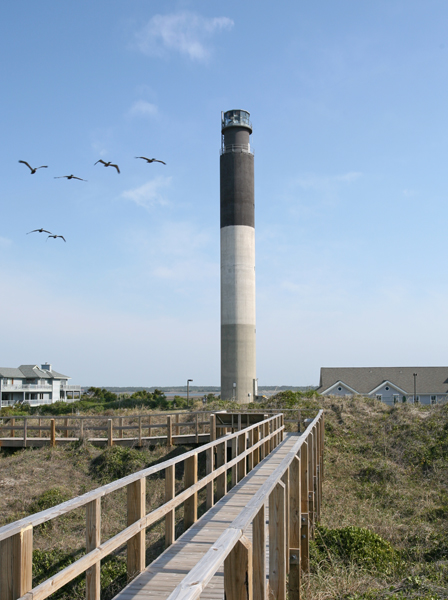 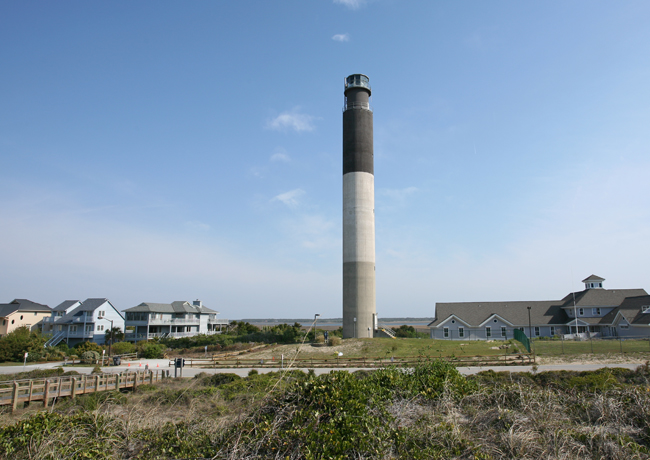 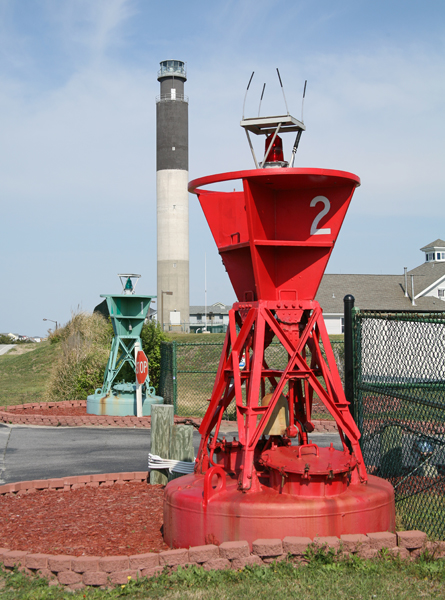 Oak Island Lighthouse is an intriguing mixture of old and new, tradition and innovation. The present structure, completed in 1958, is one of the most recent lighthouses built on American shores. Although the current lighthouse is young, attempts to illuminate this particular stretch of water have been made for over two hundred years. These efforts have been thwarted by hurricanes, war, and changing shipping channels.

In 1761, a hurricane carved out an inlet, roughly eight miles upstream from the mouth of Cape Fear River, that soon became a popular alternate route to Wilmington, North Carolinas largest port. Because of the increased traffic in this aptly named New Inlet, a lighthouse was built in 1816 on Federal Point, near the site of todays Fort Fisher. This forty-foot, brick tower was destroyed by fire in 1836, prompting the construction of a replacement tower the following year. After Confederates destroyed the 1837 tower during the Civil War, a lighthouse consisting of a two-story frame dwelling topped by a lantern and resting on nine iron piles was built near Federal Point in 1866. This screwpile lighthouse served until New Inlet was closed in 1879. Bald Head Lighthouse was discontinued in 1866, upon the establishment of the new Federal Point Lighthouse, but was relighted in 1879, and a beacon light was placed on the nearby beach to form a range for entering the river.

Two brick towers, space 130 yards apart, were constructed on Oak Island in 1849 at a cost of $8,985 as an additional guide for mariners entering the mouth of Cape Fear River. Each of the towers was equipped with ten lamps and reflectors that were placed in operation on September 10, 1849. The antiquated lighting systems were replaced by fifth-order Fresnel lenses in 1855. Because of their proximity to Fort Caswell, the lights were often referred to as the Caswell Lights. During an inspection in 1851, it was noted that John G. Brickman, keeper of the range lights, could not read or write and had to get a friend at Fort Caswell to make his quarterly reports.

After the brick towers were destroyed during the Civil War, a keepers dwelling surmounted by a lantern and a skeletal tower mounted on a rail tramway were built in 1866 to serve as a new set of range lights for crossing the rivers bar. By 1872, the front range light was threatened by erosion, and the Lighthouse Board requested $4,000 to build a new pair of towers, while retaining the existing dwelling for the keeper. The requested sum was granted on June 23, 1874, but just when the work was getting underway, the Board suspended the project until it could be determined if changes occurring in the river channels would be permanent. Oak Island Channel, marked by Oak Island Range, had started to shoal, prompting mariners to use Bald Head Channel for entering the river.

Finally, in 1879, the new range lights were constructed as described in the Annual Report of the Lighthouse Board for that year:

These beacons have been rebuilt from the appropriation of $4,000, made by Congress for that purpose, on a range-line a little west of the former one. The front beacon is a skeleton frame structure, with wooden lantern set upon a wooden tramway 60 feet long. The light is 22 feet above high water. The rear beacon is a skeleton frame with inclosed watch-room, the lantern from the old light being used for the new beacon. The foundation is brickwork upon a timber grillage, below the level of standing water. The focal plane is 30 feet above high-water mark, and the beacons are 900 feet apart. The range is effective for vessels crossing the bar; but its efficiency would be increased by raising the rear beacon 10 feet higher, that it may be seen at a greater distance at sea.

A ten-foot brick base was built under the rear light in 1882, and a new boathouse was provided. In 1885, the front range light was moved 450 eastward and placed on a new tramway to mark the main entrance to the river.

Unfortunately, like their predecessors, the 1879 range lights had a short life. Changes in the channel at the entrance to Cape Fear River rendered the lights useless, and the station was discontinued on July 31, 1894. The illuminating apparatus and other valuable material were taken to Charleston and stored until needed elsewhere. The foundation of the 1879 rear light can still be seen today.

In 1903, the Lighthouse Board built the 150-foot-tall Cape Fear Lighthouse a few miles east of Bald Head Lighthouse. Outfitted with a first-order Fresnel lens, the lighthouse produced a powerful flashing light to warn mariners away from the dangerous Frying Pan Shoals. Cape Fear Lighthouse served as the areas coastal light until 1958, when an even more powerful light was installed atop a new tower constructed on Oak Island.

As the last lighthouse built in North Carolina, Oak Island Lighthouse is as durable as they come. Twenty-four concrete-filled pilings were driven sixty-seven feet into the ground to provide a solid foundation, and an octagonal concrete base, measuring thirty feet wide and three feet deep, was used to cap the pilings. The tower itself stands 158 feet tall and is made of solid, eight-inch-thick, reinforced concrete. During construction of the tower, a temporary concrete mixing plant was set up at the site and operated continuously for six days. The concrete was poured into a movable form that was slowly raised by jacks at the rate of one foot per hour. When the project was submitted for bids, a tapering tower built of experimental aluminum-alloy panels was one of two potential designs, but the concrete tower with a constant diameter of seventeen feet won out.

The three bands of color that give the tower its distinctive daymark also speak of modern innovation and durability. For the first forty feet of the tower, workers poured natural gray cement. In forming the next fifty feet they used a mixture of white Portland cement and white quartz aggregate, and for the final fifty feet they mixed black coloring with the cement. The result is a monolithic tower with three bands that never need repainting.

Unlike traditional lighthouses, Oak Island Lighthouse has no spiral staircase. Instead, its keeper had to climb a series of ships ladders with a total of 134 steps. Tools are hauled to the top in a metal box attached to a long pulley. The aluminum lantern room, which now houses four 1000-watt aerobeam lights, weighs 1,740 pounds and had to be installed by a Marine Corps helicopter. With its 2.5 million candlepower lights flashing intermittently and visible twenty-four miles out to sea, Oak Island Light is one of the most powerful lighthouses in existence.

On May 15, 1958, eighty-five-year-old Captain Charles N. Swan, who was born at Amelia Island Lighthouse, served aboard Frying Pan Shoals Lightship, and was keeper of Cape Fear Lighthouse on Bald Head Island from 1903 to 1933, threw the switch to activate Oak Island Lighthouse. Twenty minutes after its activation, the light went out, but a fuse was quickly replaced, and the beacon was back in operation before darkness fell.

In the 1930s, the U.S. Coast Guard took ownership of the land on which Oak Island Lighthouse is located and used a portion of the property for a Coast Guard station. In 2004, both Oak Island Lighthouse and the land immediately surrounding the tower were deeded to the town of Caswell Beach. Friends of Oak Island Lighthouse, a non-profit organization, has been formed to preserve and maintain the lighthouse and grounds. In 2016, Caswell Beach commissioners voted unanimously to loan $50,000 to Friends of the Oak Island Lighthouse so cracks in the lighthouse could be repaired. While the tower is still structurally sound, water is seeping through the cracks and over time will corrode the steel rebar that holds the cement together. The Friends have saved about $50,000 over the years for the repairs that are expected to cost around $90,000.

The Coast Guard still is in charge of maintaining the lights, but the public is able to climb the lighthouse through tours arranged through Friends of Oak Island Lighthouse. If that sounds like too much work, the town has constructed a boardwalk and an observation deck just across the street that provide a great view of the lighthouse.

Located adjacent to the grounds of the Oak Island Coast Guard Station between Caswell Beach and Fort Caswell.
Latitude: 33.89279, Longitude: -78.03505

For a larger map of Oak Island Lighthouse, click the lighthouse in the above map.

From downtown Wilmington, take Highway 74 west over the Cape Fear River, and then turn south on Highway 133 and follow it south for 27 miles to Oak Island. When the highway ends turn left on Caswell Beach Road and continue east along the shore for 2.5 miles to Oak Island Lighthouse.

The tower is open for climbs to the second floor level on Wednesdays and Saturdays between 10 a.m. and 2 p.m. from Memorial Day through Labor Day. Arrangements to climb to the top of the lighthouse can be made by clicking here.

The lighthouse is owned by the Town of Caswell Beach. Grounds open, tower open during tours.


Whenever I see a picture of the Oak Island Lighthouse, it reminds me of a pencil - tip buried in the ground and eraser up top.