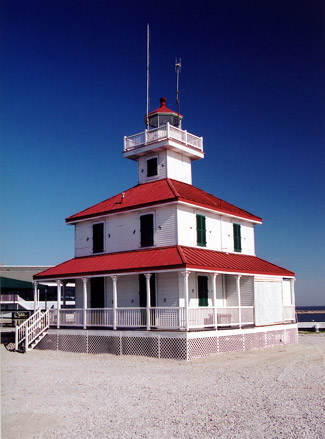 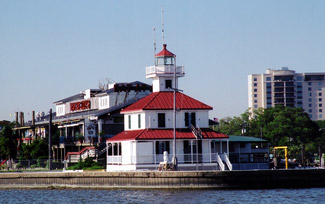 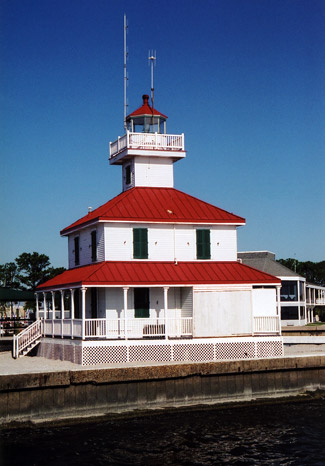 The City of New Orleans lies between the winding Mississippi River to the south and the shores of Lake Pontchartrain to the north. In the 1830s, a team of Irish and German immigrants constructed a canal from Lake Pontchartrain to the citys interior. The canal was filled in years ago, but indications of its existence can still be seen along its route that followed present-day West End Boulevard to the Pontchartrain Expressway (I-10) and terminated in a turning basin near the site of the Superdome. This canal wasnt the first to penetrate the city, just the most recent. Hence, it was given the descriptive appellation New Canal. Before the canal was completed, Congress had authorized funds for the establishment of a light at the entrance to New Canal. The lighthouse was an octagonal, wooden tower resting on pilings driven into the lake bottom and was built by Francis D. Gott under a contract for $4,500 that was signed on July 31, 1838. Nine oil lamps set in fourteen-inch reflectors were used in the towers lantern room to produce a fixed white light at a focal plane of thirty feet. This first New Canal Lighthouse was completed by February 1839, but after just four years, the towers lower timbers had rotted, causing it to lean. In 1853, Danville Leadbetter, the lighthouse inspector for the Gulf of Mexico, wrote that the three lighthouses on Lake Pontchartrain, including New Canal Lighthouse, were wholly worthless and were being repaired only in the hope of making them serve till new ones can be built. The towers underpinnings were strengthened that year and its copper deck repaired in the hope of making the tower last a few more years.

On August 3, 1854, Congress appropriated $6,000 for a new light-house at New Canal, in place of the present structure, which will not admit of being repaired. The second New Canal Lighthouse, a square, one-story structure supported by iron pilings, was completed in 1855. The towers four-sided roof sloped upwards to the lantern room, which held a fifth-order Fresnel lens.

During the Civil War, the Confederates kept the light active until New Orleans fell to Union forces in April 1862. After damage to the lighthouse was repaired, the light was relit the following year with its pre-war keeper, William A. Waldo, being reappointed.

In 1869, a substantial breakwater was built on the east side of the lighthouse, and a slate roof replaced the old wooden shingles to protect the building from the sparks of passing steamers and its own stovepipe.

Around 1880, a substantial yacht club was built northwest of the tower, partially obscuring the light. The Lighthouse Board talked of discontinuing the light, but decided rather to build a new taller lighthouse. The light was discontinued on February 25, 1890, and a temporary lens lantern was displayed from a pole. The old lighthouse was sold at public auction on February 26 and removed from the site a few days later. The new white, two-story lighthouse was built on an iron-pile foundation and was surmounted by a black fifth-order lantern room. The focal plane of the light, activated on June 2, 1890, was now forty-nine feet, sixteen feet higher than before.

On July 7, 1898, a 1,200-pound bell, suspended in a tower and struck by machinery, commenced operation at the station. Fog was common on Lake Pontchartrain during certain periods of the year and greatly slowed navigation. As the lakes shoreline was quite regular, it was believed that a fog bell would allow vessels to keep on their way in foggy conditions. A covered way connecting the bell tower to the lighthouse was built in 1901, and an oil house was added to the station in 1909.

New Canal Lighthouse just might hold the record for having the most female keepers. At least five women served at the station, most of whom took over when their husbands died while serving as keeper. Elizabeth Beattie became keeper in 1847 after her husband Thomas, who was the first keeper of New Canal Lighthouse, passed away. Keeper Caroline Riddle received commendations for securing the lens and hanging a lantern in the tower during a powerful hurricane in September 1915. As the storm struck, the barometric pressure fell to a U.S. record low of 28.11 inches, while Lake Pontchartrain rose above its levees, flooding parts of New Orleans.

Keeper Margaret Norvell is remembered for her valiant rescues. On one occasion, she used the stations rowboat to save a Navy pilot, who had crashed his biplane into the lake. In 1925, she helped evacuate passengers from the ferryboat Southland that caught fire and sank near the lighthouse. Margaret Norvell retired on April 30, 1932 after nearly forty-one years of service as a keeper. She was appointed assistant keeper of Head of Passes Lighthouse upon the death of her husband in 1891, and later served at Port Pontchartrain Lighthouse before being transferred to New Canal Lighthouse.

New Canal Lighthouse originally stood approximately 1,000 feet offshore, but landfill projects in the early 1900s slowly brought the shore to the lighthouse, creating what is now Lakefront Park. The lighthouse served as a Coast Guard Station with a search and rescue detachment from the early 1960s until a new facility was completed in Bucktown in 2001.

On August 29, 2005, Hurricane Katrina ravaged the City of New Orleans. The storm, which is the costliest natural disaster in the history of the country, destroyed several lighthouses and inflicted significant damage to others. New Canal Lighthouse, sitting as it does on the shores of Lake Pontchartrain, was inundated by the storm surge accompanying the hurricane. This photograph submitted by Dave Lockhart and the one at right provided by Anne Rheams show the extent of the damage to the lighthouse. Though heavily damaged, the lighthouse remained upright and mostly intact until a cold front the following November caused the unstable lighthouse to keel over and lose its lantern room.

The Lake Pontchartrain Basin Foundation (known now as Pontchartrain Conservancy) had been seeking ownership of New Canal Lighthouse since the Coast Guard left the lighthouse in 2001. Just before Katrina, LPBF was participating in the National Historic Lighthouse Preservation Program with a goal to turn the lighthouse into an education center for the public. Undaunted by the damage inflicted by Katrina, LPBF signed a lease with the Coast Guard in September 2006 to restore the lighthouse. Site cleanup and stabilization, which together cost around $75,000, had to be completed before any restoration could begin.

During the fall of 2007, the remains of New Canal Lighthouse were dismantled, and any historic materials that were salvageable were retained. In July 2011, a $439,000 construction contract was signed by Certified Construction Professionals and Chris Holmes, Board Chairman for the Lake Pontchartrain Basin Foundation. Prom Dagoglou of Certified Construction Professionals grew up where he could see the lighthouse and says the rebuilding of the lighthouse is something were going to be putting our heart and souls in.

A groundbreaking ceremony was held at the lighthouse on February 27, 2012, and later that day a truck unloaded pilings to raise the lighthouse nineteen feet above the ground to prevent damage from future storm surges. On August 21, 2012, the lantern room was hoisted atop the rebuilt New Canal Lighthouse. A relighting ceremony scheduled for August 29 had to be postponed as Hurricane Isaac struck New Orleans that day on the seventh anniversary of Hurricane Katrina. The ceremony, which featured a fundraising run, was eventually held on September 26, 2012. Tom Benson, owner of the Saints and FOX 8, had the honor of flipping the switch. This has meant so much to our city, said Benson. Its like our city. Its been here forever. Thats why we wanted to light it up again.

Mark Hatcher provided this photograph of the restored lighthouse.

Located on Lake Pontchartrain at a former Coast Guard station near the western end of Lakeshore Drive.
Latitude: 30.02698, Longitude: -90.11324

For a larger map of New Canal Lighthouse, click the lighthouse in the above map.

Near the intersection of the west end of Interstate 610 and Interstate 10, take West End Boulevard north towards Lake Pontchartrain. As you near the lake, West End Boulevard will become Lakeshore Drive. Continue on Lakeshore Drive and when it makes a sharp right, you will see the New Canal Lighthouse. A good view of the lighthouse is also possible from the end of the breakwater, which forms the nearby marina. Tours of the lighthouse are available between 10 a.m. and 4 p.m., Tuesday through Saturday. Group tours are available by appointment, and the facility can be rented as an outdoor venue.


I was a bit surprised when I ran across this photograph that shows a snowman being built at the lighthouse. It apparently doesn't snow that often in New Orleans as there were just seventeen "snow events" between 1853 and 2008.