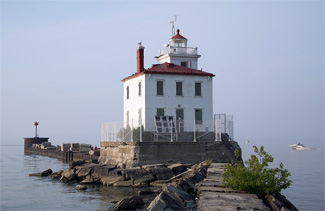 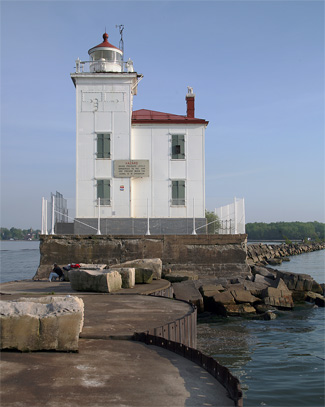 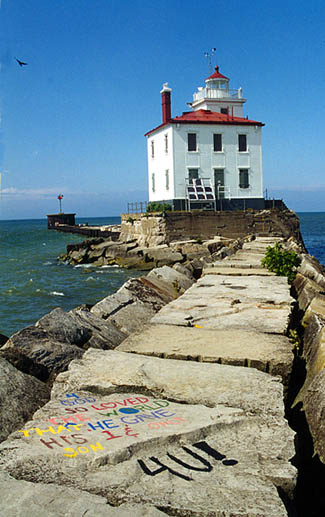 This charming forty-two-foot tower, with its attached two-story keepers cottage, sits near the end of the west breakwater that shields the man-made harbor of Fairport. The harbor, in turn, protects the mouth of the Grand River, which has served as one of the regions most important commercial hubs. In 1896, a project for improving Fairport Harbor was adopted that called for the construction of two converging breakwaters. A 1,000-foot extension of the west breakwater was completed in 1910, and a fixed red lens lantern was exhibited from its outer pierhead until a twenty-five-foot, steel, skeletal tower topped by an automatic acetylene light was placed thereon in 1911. The following year, a light was established atop a sixty-five-foot, steel, skeletal tower on the end of the west pier to range with the west breakwater pierhead light. With the establishment of this range, the rear range on the east pier was discontinued. This historic postcard shows the 1875 east pier light and the 1911 west pier light. The piers still exist today, protected within the confines of the breakwaters, and are marked by modern beacons.

The 1911 west breakwater light was meant to be temporary, and starting in 1911 funds were requested for a major light and compressed-air fog signal on the breakwater that would replace Fairport Harbor Lighthouse, located on a hill overlooking the harbor. Congress finally appropriated $42,000 in 1917 for the project, but due to war conditions and increased prices, the amount was insufficient to complete the work. Plans for the lighthouse were completed in 1919, and in 1920 a concrete foundation was prepared at the breakwater and construction of the outer shell of the lighthouse commenced at the Buffalo Lighthouse Depot.

A 1921 edition of the Lighthouse Service Bulletin described the interesting method of economically building a new lighthouse structure ashore for an exposed location.

The shell of the building, composed of steel studding, floor beams, rafters, side and roof plating, and cast-iron cornices, sills, and lintels, was fabricated, erected, riveted, and bolted permanently together at the Buffalo Lighthouse Depot by the district construction force. As there completed, without interior mason work, finish, or the lantern, it was 28 feet square, two stories and attic high, with a tower rising 38 1/2 feet high in one corner, and weighed about 65 tons. It was then moved upon the deck of a small wooden freight steamer, secured by steel cables and transported without incident a distance of 147 miles up the lake to Fairport Harbor, Ohio, where it was moved from the steamer to a harbor pier. It was then blocked up to the requisite elevation, moved upon a large derrick scow, and transferred to and permanently anchored in place on the breakwater pierhead at the harbor entrance.

Congress finally provided an extra $15,000 on May 28, 1924 that allowed work on the lighthouse to continue. Illuminated by electricity supplied by small oil engine generators, the stations fourth-order Fresnel lens commenced operation on June 9, 1925, with a characteristic of an occulting white every five seconds in this manner: light three seconds, eclipse two seconds. The diaphone fog signal sounded a group of three blasts every thirty seconds.

In 1935, a 500-foot-long, cellular sheet steel pile extension to the west breakwater was completed, and a light was placed at its outer end. A submarine electric cable was extended to the lighthouse in 1940. In case of a commercial power outage, a diesel generator installed in the lighthouse in 1939 could be used. A marker radiobeacon was established at Fairport West Breakwater Lighthouse in 1948.

Although the breakwater lighthouse is a picturesque and unassuming structure, its inception was a source of deep consternation for the inhabitants of Fairport. Some of the funds for completing the breakwater lighthouse were to be used to demolish the existing lighthouse, which prompted the citizens of Fairport to rally in defense of their beloved landmark. The public outcry eventually reached the Secretary of Commerce, who agreed to let the old stone lighthouse remain standing.

Frank LaRose served for a decade at the breakwater lighthouse starting in 1927. During his service, watches were arranged so that two of the three men assigned to the station were always at the lighthouse. In case of an emergency, the keeper ashore could be summoned by three long blasts followed by two short blasts on the fog horn. On bright days, the keepers would hang cloth shades around the Fresnel lens, as the lens could focus the suns rays and scorch the paint in the lantern room. During the winter, the keepers would don ice shoes, metal soles that they would strap over their regular shoes, when they walked out to the lighthouse. Still, the sight of a large wave bearing down on the breakwater was cause for alarm.

John Brophy became head keeper of Fairport Harbor Breakwater Lighthouse in 1937, after having spent five years in charge of Ashtabula Lighthouse. When just a lad of sixteen, Brophy joined the crew of the whaling schooner Ellen A. Swift out of New Bedford, Massachusetts in 1910. During his first voyage, the vessel took twenty-seven whales and then reduced the blubber to oil on the trip back to New Bedford. Brophy continued the life of a seaman on the Great Lakes before joining the Coast Guard in 1917. When asked by a reporter what his hobbies were, Brophy replied, Home, and my children. John and Sarah Brophy had two children, Julian and Shirley.

Fairport Harbor Breakwater Lighthouse is now automated, and its Fresnel lens has been replaced with a modern optic. While the breakwater light can be seen from the old lighthouse, visitors wishing to get a better look at the light can walk out on the breakwater.

In 2005, Fairport Harbor West Breakwater Lighthouse, deemed excess by the Coast Guard, was offered at no cost to eligible entities, including federal, state, and local agencies, non-profit corporations, and educational organizations under the provisions of the National Historic Lighthouse Preservation Act of 2000. Even though the application period was extended, no qualified owner was found, so the General Services Administration put the lighthouse on the auction block. The auction began on September 28, 2009 and closed a month later on October 29, after ten bids were received from six different parties. The winning bid of $77,000 was submitted by samsloan, a code name for eighty-seven-year-old Mentor Construction magnate Jerome Osborne, who had a reputation for purchasing and restoring historic properties in the area.

In July 2010, the General Services Administration declared Osbornes purchase to be in default because he did not obtain a lease to use the federal breakwater adjoining the lighthouse. Osborne lost his $10,000 deposit, and another auction for the lighthouse opened on August 16, 2010. Four bidders participated in the second auction, which concluded on October 1 with a winning bid of $85,200 submitted by Scott Monroe of Seabrook, Texas.

In early November 2010, the General Services Administration declared that Scott Monroe was in default on the lighthouse and would lose his $12,000 deposit. Financial difficulties apparently forced Monroe to reevaluate his successful bid. A third auction for the lighthouse opened on June 1, 2011, with the caveat that the lighthouse might be awarded to the second-highest bidder, if the winning bidder defaulted. According to the Notice of Availability, the winner had to obtain a lease for that portion of the breakwater beneath the lighthouse from the U.S. Army Corps of Engineers, and an administrative fee of $2,500 would be charged for the initial lease.

An opening bid of $32,000 was placed on June 17, 2011 and topped later that day by a bid of $36,000. Six bidders participated in the auction, which closed on July 17 with a winning bid of $72,010. The third time at auction wasnt the charm for the lighthouse, as less than three weeks later, it was announced that the winning bidder had backed out and would forfeit the $15,000 security deposit. Instead, the lighthouse was awarded to the second-highest bidder, Sheila Consaul, who promptly signed the paperwork to complete the sale.

Consaul, a marketing executive from Reston, Virginia, announced plans to use the structure as a personal summer home, complete with three bedrooms. Im calling it the ultimate lake house, said Consaul. Ive looked at a lot of lighthouses, but this was my favorite. Consaul visited the lighthouse twice during the fall of 2011 and found during one of the trips that vandals had broken out eight windows in the upper story.

The biggest challenge will be providing running water, which is a bit ironic considering that its on Lake Erie, Consaul said. What I hope to do is have built a self-contained and environmentally friendly water and waste water system. Consaul started restoration work in the spring of 2012 and hoped to have it completed by the end of 2013. As the power cable to shore has been severed, Consaul plans to use solar or wind power likely in combination with a backup generator. The restoration effort can be followed at fairportharborwestlighthouse.com.

For a larger map of Fairport Harbor West Breakwater Lighthouse, click the lighthouse in the above map.

To walk the breakwater to the light, take the Grand River Heisley Exit from Interstate 90 and follow Highway 44 (Heisley Road) north to Headlands Beach State Park, which is located on the west side of the mouth of the Grand River. The park can also be reached by taking Highway 44 from Highway 2. At the northern end of the park, there is a trail that leads to the breakwater. The Fairport Breakwater Lighthouse can also be seen from the Fairport Harbor Lighthouse.