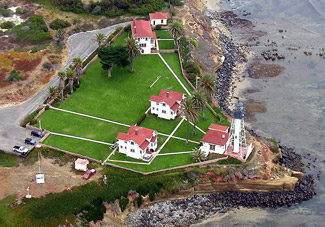 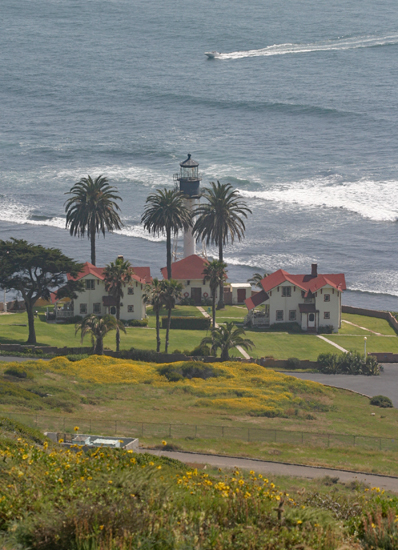 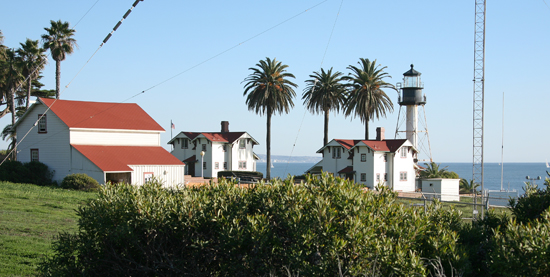 Even before construction of Old Point Loma Lighthouse, officials were concerned that fog might shroud its light on the lofty hill. Their concerns were soon validated, and after thirty-six years of operation, the old lighthouse was abandoned in favor of a light at a lower elevation. Pelican Point, a low-lying, level area at the southern extreme of Point Loma, was selected as the site for the replacement light. Brick and lumber were delivered to the point in September 1889, and by the following spring, two Victorian cottages, each flanked by its own cistern and privy, along with a concrete foundation for the lighthouse were completed. The tubular lighthouse tower, manufactured by Phoenix Iron Company of Trenton, New Jersey, rolled into San Diego aboard two flatcars of the Southern California Railroad on July 5, 1890. The tower was off-loaded at Old Town, and strong wagons were employed to transport it to the point. During the month of August, the spiral staircase, central tube, and supporting framework were assembled to support the two-story lantern room. The seventy-foot-tall, pyramidal tower, built more for function than aesthetics, is the only one of its kind on the west coast.

A Fresnel lens, equipped with beautiful ruby panels to match the characteristic of the old lighthouse, was ordered from France, however, Henri Le Paute, the lens maker, was so proud of his creation that he wished to enter it in the Paris Exhibition of 1889. After the lens won a gold medal, Le Paute requested permission to exhibit it at Chicagos Colombian Exposition in 1893. The Lighthouse Service agreed to let the lens remain on the exhibition circuit, and a replacement lens was procured. Frank A. Burke, Superintendent of Lighthouse Repairs, arrived in San Diego in October 1890 and soon made an unpleasant discovery. As recorded in a report to the Lighthouse Board date October 20, 1890, the lens furnished for the new tower was found to be too large for the space provided for it, therefore it was necessary to procure another.

The steamer Corona arrived in San Diego on February 3, 1891 with the new lens, described by the local paper as a $4,000 affair from France. The lens may have originally been intended for the Anclote Key Lighthouse in Florida, as the plate on the pedestal in New Point Loma Lighthouse bears the following inscription: ANCLOTE KEYS FLORIDA Henry Le Paute Engineer PARIS 1887. After it was assembled in the lantern room, the lens was illuminated for the first time on March 23, 1891. The community helped celebrate the inaugural lighting with a sailing party to the point and a moonlight picnic. The third-order lens has twelve bulls-eyes, and a red pane of glass was placed in front of every other one to produce the desired characteristic. After winning another prize in Chicago, the lens originally manufactured for New Point Loma Lighthouse was placed in Chicago Harbor Lighthouse, where it was used until the early 1960s.

The first principal keeper at New Point Loma Lighthouse was Robert Israel, who had served for twenty-one years just up the hill at Old Point Loma Lighthouse, however, after less than one year at the new lighthouse, Israel quit over a quarrel with authorities. Israel was still bitter over an incident that occurred three years earlier. One of Israels sons and the son of the assistant keeper had lost the stations only boat, and to cover the loss, the district inspector had deducted $50 from the keepers paychecks. Israels repeated request for reimbursement was denied, and he retaliated by being cantankerous and shirking some of his duties. An inspection of the station, conducted late in 1891, found that the lens was not clean and the grounds were in disorder. Israel resigned in January 1892 and was replaced by George P. Brennan, who transferred to the station from Point Arena.

Brennan and his wife Mary brought six children with them to their new home on Point Loma. The oldest children, Richard, George and twins Joe and Nellie, would ride to the nearest school in a buggy pulled by Ping, their swayed-back horse. Mary Eva Addis, a classmate, recalled, The Brennans came with bloody noses, and maybe only one would get there. Theyd have awful fights. They were Irish you know  They had awful tempers, but I loved everyone of them.

Joe Brennan remembers that fresh water was often a problem at the station. We had what they called the watershed out in back of the buildings and it was all right in wet years, but the years werent always wet. The watershed was a big patch of cement about the size of a couple of tennis courts, on the side of the hill, with a cistern at its lower corner. It was supposed to catch enough rain-water to supply the two keepers families, but it was seldom enough. During the dry years  we used to load water from a well in Roseville, half a dozen barrels of it at a time, and bring it out in a wagon. The catch-water basin had an area of eight feet square and was completed in October 1891, just months before the Brennans arrived.

The color of the lighthouse tower was changed in 1894 from brown to white. Two years later, Keeper Brennan was authorized to move the barn from the windward side of the dwellings to avoid the nuisance caused by the wind carrying the foul odors into the living apartments. The stations water supply issues were resolved in 1906, when pipes were run to the distributing system of Fort Rosecrans.

Captain Richard A. Weiss was appointed head keeper of the lighthouse in 1904 and that year, while reading through the stations records, he learned that a meteor had fallen on the point in 1875. After a search, Weiss located the meteor. While it was too large to extract from the ground in one piece, several chunks of the meteor that had broken off during impact were recovered.

Following an appropriation of $17,500 on August 23, 1912, a square building with a double-hipped roof was built just north of the tower to house a powerful compressed-air fog signal that was placed in operation on March 1, 1913. A new dwelling was also built southeast of the twin Victorians of hollow terracotta blocks for the head keeper, and the new second assistant keeper, assigned to help with the increased workload at the station, took over one of the Victorians. Lacking a proper fog signal, keeper Israel is said to have used his trusty shotgun as his own personal fog signal. When a low bank of fog covered the waters, Israel would keep an eye out for the masts of a sailing vessel protruding above the fog and fire warning shots if the vessel drew too close to the point.

Just a year before the fog signal was added, an incandescent oil-vapor light replaced the kerosene burner. Around this time, the red panes of glass were removed from the lens, and the lights characteristic became flashing white. The light was converted to electricity in 1933.

James Milford Johnson transferred to the station in 1931 and was certainly happy to be closer to civilization after his assignment at the Farallon Islands. Johnson would witness several changes at the station during his twenty-one years on the point. When the Coast Guard assumed control of all U.S. lighthouses in 1939, Johnson became a Boatswains Mate, the Coast Guard rank commensurate with his pay level in the Lighthouse Service. During World War II, a black out order was imposed on the station. Not only was the light in the tower extinguished, but the keepers also had to place black tar paper on their windows if they wanted to turn on their lights. To make the station less visible during the day, the station was painted olive drab  the dwellings, the lighthouse, the outbuildings, even the sidewalks.

A sense of normalcy returned to the point following the war. Assistant keeper Johnson was offered the head keeper position in 1952, when Head Keeper Dudley retired. Johnson, however, did not want to move into the head keepers dwelling, a move that was considered mandatory, so he reluctantly took an early retirement instead.

The lighthouse was fully automated in 1973. From that time, the Fresnel lens would rotate twenty-four hours a day, until rust and warping brought it to a halt in 1997. Repairs would have been too costly, so a replacement beacon was used instead, and a zippered canvas was placed over the antique lens. In 2002, the lens was dismantled, removed from the tower, and placed in storage. After being restored, the lens was placed on display in 2004 in the replica assistant keepers dwelling constructed adjacent to Old Point Loma Lighthouse.

In February 2013, an LED light array was installed atop the lighthouse. This new light is more energy efficient than its predecessor and will also turn on automatically at dusk and off at dawn instead of being illuminated around the clock. The daily cost for operating the light is expected to fall from $4.60 to just 48 cents, but its range will be fourteen miles instead of twenty-four.

In June 2017, Neil Gardis of Ohana Industries, Ltd. was awarded a contract to restore New Point Loma Lighthouse. The Coast Guard anticipated the work would include abrasive blast cleaning of the tower and replacement of those cast-iron components showing the greatest degradation. After multi-level scaffolding was put in place around the tower in September 2017 so restoration could begin, it was soon discovered that roughly 20,000 pounds of cast-iron had to be recast and replaced. Using the original architectural drawings for the lighthouse, castings were made in Jacksonville, Florida and shipped to San Diego. The six-month project ended up taking two-and-a-half years and cost $2.1 million.

On March 4, 2020, the Coast Guard installed a VLB-44 LED array inside the lantern room where the third-order Fresnel lens was formerly housed, and the next day, this new light was placed in operation. During the work, the Vega beacon, which was formerly attached to a railing atop the tower, was mounted on a platform behind the lighthouse.

Today, the keepers quarters continue to house Coast Guard officers, who are fortunate to enjoy the prime oceanfront property. The lighthouse can be seen from a lookout point near Old Point Loma Lighthouse in Cabrillo National Monument, or you can take a road down to the tide pools at the base of the point for a closer view of the station from the road.

For a larger map of Point Loma (New) Lighthouse, click the lighthouse in the above map.

From I-5 South or I-8 West, take the exit for Rosecrans Street, also known as Highway 209. Stay on Rosecrans for 2.9 miles to reach Point Loma, and then turn right onto Canon Street. Follow Canon Street 1.3 miles until it ends, and then take a left onto Catalina Boulevard and follow it for 3 miles to Cabrillo National Monument, which is open daily from 9 a.m. to 5 p.m. except on Thanksgiving and Christmas. There will be signs along the route.

The lighthouse is owned by the Coast Guard. Grounds/tower/dwellings closed.


The westernmost keeper's house at the New Point Loma Lighthouse was used in the filming of the movie Top Gun. It served as home of Mike Metcalf (Viper), the commanding office of Top Gun. The house and surrounding area are seen when Maverick (Tom Cruise) goes to the officer's house to discuss his options, after the crash that killed Goose. If you are looking for other sites in San Diego that appeared in the movie, stop in for some food at the Kansas City Barbeque, near Seaport Village. The restaurant was where Goose and Maverick jammed to "Great Balls of Fire".


This lighthouse is difficult to photograph up close unless you obtain permission to go on the property or charter a boat to view it from the water.