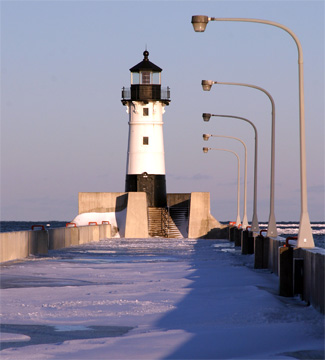 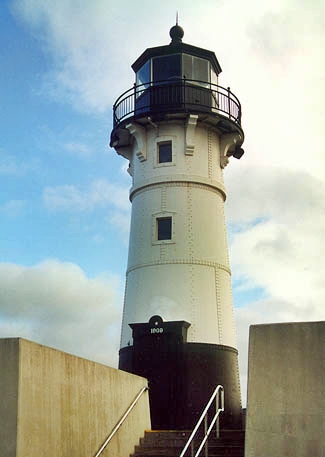 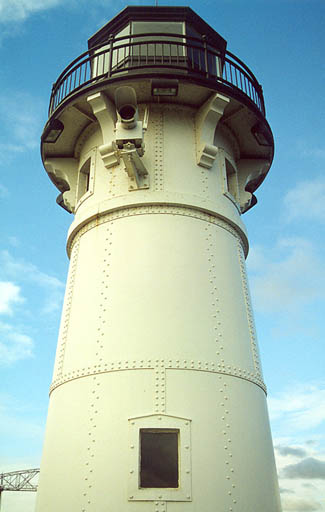 An act of June 3, 1896, unified the harbors of Duluth, Minnesota and Superior, Wisconsin and provided over $3 million for improvements. Part of this money was used to widen the Duluth Canal and replace the existing piers with substantial structures of timber and monolithic concrete. Butler Ryan Company of St. Paul was contracted for the construction of the substructure and superstructure for the new north pier, and work started in April 1898. The south pier was completed in 1900 and marked the following year by a pair of range lights, while the north pier was completed in 1901 and was not lit. The piers each have a length of about 1,700 feet and project roughly 1,150 feet beyond the shoreline. The foundation cribs extend twenty-two feet below low-water, and the concrete superstructures rise to a height of ten to eighteen feet above low-water. The lake entrance, between the piers, is 300 feet wide.

In 1908, the Lighthouse Board acknowledged the need to mark the north pier:

The approach to Duluth Harbor is one of the worst and most dangerous on the whole chain of lakes. The entrance piers are only 300 feet in width, and the north pier is so close to the shore that a vessel making a mistake in judging the width would be immediately on the rocks. The Lake Carriers Association considers this a matter of such importance that it has made arrangements for the exhibition of private lights for the balance of the season of navigation in 1908.

The local officers of the Eleventh district, after careful investigation, state that navigation will be very decidedly facilitated by the establishment of a light on the north pier, and the Board therefore recommends that such light be established, at a cost of $4,000.

In its annual report for 1908, the Lake Carriers Association noted that it had paid to have lights on the north pier until the close of shipping that year:

The City of Duluth has maintained lights on the north entrance at Duluth for a number of years for the benefit of passenger traffic, and at the close of the passenger season these lights have been discontinued. Notwithstanding that repeated efforts have been made to have this pier properly lighted by the Lighthouse Department until the close of navigation, nothing has been accomplished in this respect. The lights were discontinued by the city as usual this year, on September 15th, but by special arrangement made by your President, through the Board of Public Works and the U. S. Engineer at Duluth, a cluster of 6 lights, carried by three of the iron lamp posts, was maintained at the outer end of the north pier until the close of navigation.

The expense of continuing these lights from the close of the passenger season until the close of navigation was borne by the Lake Carriers Association. Major Keller, Lighthouse Engineer of the Eleventh District, in his report, has recommended an appropriation of $4,000 for a permanent lighthouse on the end of the north pier, with a suitable flash light, to be about fifty feet above the lake level. The amount has been included by the Lighthouse Board in its estimates, and we have every reason now to believe that this appropriation will be granted, which will add much to the safety and comfort of our masters in entering Duluth Harbor.

Congress appropriated $4,000 on March 4, 1909 to light the north pier, and after plans and specifications were prepared for a metal tower, the lowest bid for furnishing and delivering the metalwork was accepted. A conical tower consisting of latticed steel columns covered with a 5/16 steel shell was erected on the outer end of the north pier and lit for the first time on April 7, 1910. The lighthouse stands thirty-seven feet tall and tapers from ten feet six inches at its base to eight feet at the base of the octagonal lantern room.

A fifth-order, Henry-Lepaute Fresnel lens was mounted on a pedestal in the lantern room, and a motor connected to the citys electric lighting system was used to drive a clockwork that produced the lights characteristic of fixed white two seconds, eclipse two seconds. Three keepers were assigned to care for the range lights on the south pier along with the pierhead light on the north pier. The head keeper lived in a frame building that had been built in 1873, when the first light on the piers was established, and the two assistants rented houses in the city until a redbrick duplex was built across from the old keepers dwelling in 1912/1913.

A radiobeacon was established at Duluth Canal on August 24, 1927. The beacon originally transmitted during four half-hour periods at six-hour intervals for general navigation purposes.

The Duluth Canal piers are a dangerous location during a storm. On the night of April 30, 1967, Nathan and Arthur Halverson, sixteen-year-old twins, and Eric Halverson, their seventeen-year-old brother, were challenging ten to fifteen-waves on the north pier, when witnesses observed a huge wave sweep one of them away. Boatswains Mate First Class Edgar Culbertson, Boatswains Mate Second Class Richard R. Callahan, and Fireman Ronald C. Prei from the local Coast Guard base braved the storm and ventured out on the pier to rescue the two boys reportedly stranded at the pierhead light. The men tethered themselves together, with a spacing of twenty-five feet, and by the light of hand lanterns, proceeded to the end of the pier.

After finding no trace of the boys at the lighthouse, the coastguardsmen headed back. While making their way along the pier, a twenty-foot wave swept Culbertson off his feet and carried him over the breakwater wall and into the turbulent Lake Superior waters. Despite a valiant effort by his crewmates, Culbertson perished. The tether linking the men together had broken Callahans wrists, which made it impossible for him to help pull Culbertson to safety. Culbertson was posthumously awarded the Coast Guard Medal, and a plaque on the north pier commemorates his sacrifice. The three Halverson brothers all perished that night as well.

In 2014, an LED beacon replaced the active Fresnel lens in the lantern room of the north pier lighthouse. The change reduced the range of the light from about fourteen nautical miles to ten-and-a-half nautical miles, but the historic lens will no longer be subjected to temperature fluctuations and ultraviolet rays that can cause the lens to deteriorate. The lens is now on display at the Lake Superior Marine Museum. The lighthouse was added to the National Register of Historic Places in 2016.

For a larger map of Duluth Harbor North Breakwater Lighthouse, click the lighthouse in the above map.

From Interstate 35 in Duluth, take Exit 256-B and proceed to Lake Avenue. Turn south onto Lake Avenue and continue straight onto Canal Park Drive which will lead you to a parking area near the canal. You can walk out on the northern breakwater and view the light at the end of the southern breakwater.