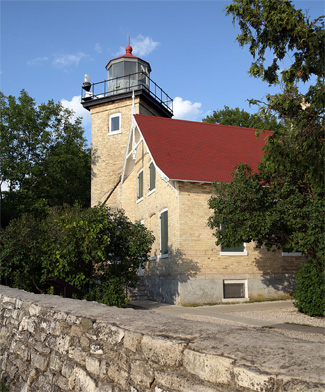 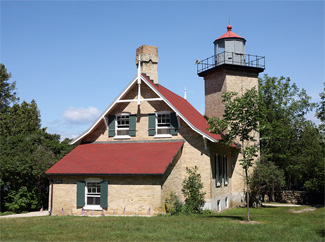 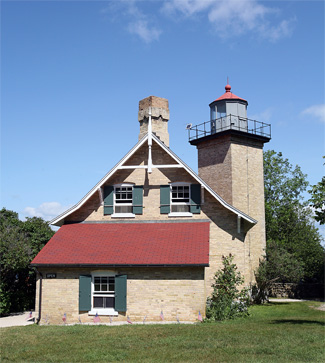 After the conclusion of the Civil War, the Lighthouse Board sent a committee to the western Great Lakes in 1865 to examine the navigational needs of the area. One of the resulting recommendations was a lighthouse on Eagle Bluff that would help commercial ships pass through Strawberry Channel, situated on the eastern side of Green Bay between the Strawberry Islands and Door County Peninsula. Congress appropriated $12,000 for the project on July 28, 1866, and that October President Andrew Johnson set aside twelve acres of public land for the project. Work on the lighthouse was to begin in 1867, but at the last moment the work crew was diverted to Sand Point Lighthouse in Escanaba. Construction at Eagle Bluff would not commence until just after the opening of navigation in 1868, when supplies were landed at Lighthouse Bay and then carted a short distance north along a path that had been cleared to the chosen cliff-top site. After clearing roughly an acre of land, the work crew from Detroit blasted a five-foot-deep hole to create a basement for the lighthouse and a second hole, ten feet to the south, to serve as a cistern.

Using cream-colored Milwaukee brick, masons constructed a two-story dwelling, measuring twenty-six feet by thirty-feet, atop the basement with an attached wing that served as the kitchen. The tower, which is nine-feet-four-inches square and has walls thirteen inches thick, was built at an angle into the northwest corner of the lighthouse and contains a spiral, cast-iron stairway to facilitate access to the three floors of the lighthouse and the ten-sided lantern room. Detroit Locomotive Works, which by this time had ceased making locomotives, built the lantern and shipped it to the site in pieces, which were assembled atop the tower along with the square, cast-iron lantern deck.

A third-and-a-half-order Fresnel lens, built in France by the Henry-Lepaute Company, was installed in the lantern room, and on October 13, 1868, just six months after work had begun on the lighthouse, Henry Stanley exhibited the light for the first time. Visible for sixteen miles in clear weather, the 860 candlepower light was fixed-white and was shown at a focal plane of seventy-six feet.

Keeper Stanley was born in Norway in 1823, immigrated to the United States in 1844, and then hurried to California five years later after hearing of the discovery of gold. Unsuccessful at prospecting, he returned to New York where he met his wife Katherine Hesh. The couple soon moved west where Henry sailed the Great Lakes and became part owner of several ships, but when the opportunity to become a keeper at Eagle Bluff arose, Henry gave up sailing and moved his wife and two children, ten-year-old John and eight-year-old Elizabeth, to the lighthouse.

Keeper Stanley maintained detailed logs about life at Eagle Bluff. While life at the lighthouse seemed to be quite happy for the Stanleys, with frequent guests and even the arrival of a piano, the couple would tragically lose both of their children while there. Mention of Johns death is not included in the surviving logs, which date from 1872, so it is assumed he passed away between 1870 and the fall of 1872. Mrs. Stanley became quite ill in 1880 and was away from the lighthouse for over five months to receive medical attention in Fort Howard, now part of Green Bay. It is assumed her doctor was Frank L. Lewis, as the following year Dr. Lewis would wed Elizabeth Stanley.

Just over three months after the wedding, Mrs. Stanley was summoned to Fort Howard as Elizabeth had become seriously ill. Keeper Stanley entered the following in the log for November 14, 1881, I received a Telegraph Dispatch from Fort Howard that Mrs. F. L. Lewis was Dead. She died the 13th day of November 1881. Mrs. Stanley arrived at her daughters home just three hours before Elizabeth passed away, and so great was the shock of her daughters death that Mrs. Stanley fell violently ill and was unable to return to the lighthouse for over six months.

Keeper Stanley noted several improvements that occurred during his tenure at Eagle Bluff Lighthouse. In 1877, the rock wall located just west of the lighthouse was built along with a woodshed for the station. In March 1882, the district lampist removed the lard oil lamp from within the lens and installed a new kerosene-burning lamp. A detached oil house was typically provided to store the volatile mineral oil, but due to a lack of funds, the kerosene was stored at the base of the tower for several years. Luckily, no accident or fire ever occurred. Stanley ended his career as keeper at Eagle Bluff on September 30, 1883 and was transferred to become keeper of the newly constructed Sherwood Point Lighthouse.

On September 20, 1883, William Duclon officially took charge of Eagle Bluff Lighthouse after having served at Waugoshance Lighthouse and Beaver Island Lighthouse. He was accompanied to the station by his wife Julia and seven sons, who shared a large bedroom on the top floor of the lighthouse. Keeper Duclon did an excellent job maintaining the light and grounds at Eagle Bluff, but did not keep a very meticulous log. The Duclon boys were at home near the water, and during the early spring of 1887, they helped their father catch more than 2,000 pounds of lake trout through the ice near Eagle Bluff. Several of the sons would become successful fishermen.

Many progressive changes occurred during Duclons tenure as keeper. Vessels became larger as steam replaced sails, passage through Sturgeon Bay Canal became free, and fewer and fewer ships used the channel near the lighthouse. In 1893, a barn (painted buff and white with a red roof) and a walkway were added to the site. A local driller was also hired to drill a seventy-foot well at Eagle Bluff, meaning the family no longer had to carry water up from the bay. A flagstaff was erected at the site in 1895, while work crews made minor repairs to the station. Telephone lines were also strung to the lighthouse sometime during Duclons tenure as keeper.

A Lighthouse Board crew constructed a brick oil house in 1890, seventeen years after the light began to burn mineral oil. An incandescent oil vapor lamp was installed in April 1917, but a year later the third-and-a-half-order Fresnel lens was replaced by a fifth-order lens as the increased brilliancy of the oil vapor light made the larger lens unnecessary.

Keeper Duclon made his last log entry on December 15, 1918, marking the end of thirty-five years at Eagle Bluff and forty-five years as a lighthouse keeper. He settled with his family in Fish Creek and died in Green Bay on September 2, 1926. Six of his sons served as his pallbearers, and he was buried next to his wife in the Blossomberg Cemetery, a few miles south of the lighthouse.

The Lighthouse Board transferred Peter Coughlin to Eagle Bluff from Green Island in February 1919, when he was sixty-two years old. He kept a much more detailed log and entered information about the weather and activity at Eagle Bluff Lighthouse almost every day. Coughlin repainted every building on the property, even the ice house previously added by Duclon.

Life was relatively calm for the Coughlins, though they both were absent from the station at times due to illness. Mrs. Coughlin passed away in Detroit in April 1926, just days before the Coughlins were going to return to Eagle Bluff. The light was converted to an unmanned acetylene light later that year, with Keeper Coughlin making his final log entry on September 15, 1926: Green Is light not vis. Rain and fog N wind. Coughlin moved to Minnesota for four years before returning to Green Bay, where he was struck by an automobile and died shortly thereafter in 1934.

Maintenance of the acetylene gas light at Eagle Bluff became the responsibility of the Cana Island keepers, who were also responsible for the unmanned Baileys Harbor Range Lights. The site remained vacant until 1930 when the Fruit Growers Union Cooperative leased the dwelling to use as an office.

The Wisconsin State Conservation Commission was in charge of Peninsula State Park that surrounded the Eagle Bluff Lighthouse. In the 1930s, the Commission successfully acquired 10.98 acres of the Eagle Bluff property to be included as part of the state park. The remaining 1.02 acres of the property was leased to the State of Wisconsin while the Federal Government maintained ownership of the light and buildings. The Lighthouse Service could access the tower and lantern at any time, and the State of Wisconsin was responsible for establishing a custodian for the property.

After the property had been transferred to the state, park employees lived in the lighthouse during the summer months, but despite the terms of the lease, the lighthouse was vacant in the 1950s and subjected to vandalism. Restoration efforts began in 1961 by the revitalized Door County Historical Society, under the leadership of Bert Sanderson and Conrad Stram, after the Coast Guard gave the society permission to work on the lighthouse and operate the site as a museum. Several Duclon family members donated personal items and furniture, including a piano that had been used in the lighthouse and, according to family tradition, transported to neighboring communities as part of a Duclon family band.

The Coast Guard replaced the acetylene gas system with a battery-powered electric light and later a solar-powered beacon mounted on the railing outside the lantern room, which still houses the fifth-order Fresnel lens. The Door County Historical Society opened Eagle Bluff Lighthouse in 1963, and it remains a popular destination for visitors. The lighthouse itself was transferred to the State of Wisconsin in 2003.

For a larger map of Eagle Bluff Lighthouse, click the lighthouse in the above map.

From Highway 42 just east of Fish Creek, turn north into Peninsula State Park. When paying your entrance fee, ask for a park map with directions to the lighthouse. Follow Shore Road north about 3.5 miles to Eagle Bluff Lighthouse. Guided tours are offered daily between 10 a.m. and 4 p.m. from early June to mid-October. Call (920) 421-3636 for exact times.

The lighthouse is owned by the Wisconsin Department of Natural Resources. Grounds open, dwelling/tower open in season.