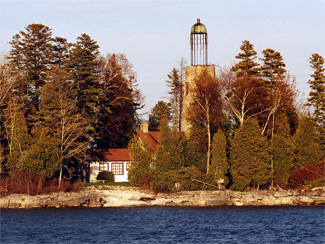 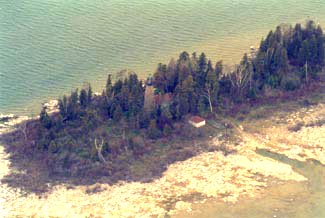 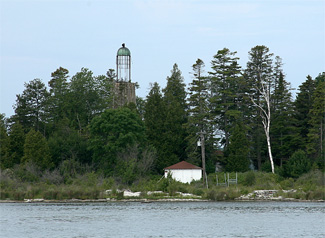 In October 1848, Captain Justice Bailey was sailing along the western coast of Lake Michigan, when he encountered an unexpected violent storm. Rather than battle the elements, Captain Bailey decided to seek refuge in a nearby U-shaped inlet, even though his charts lacked detailed information on it. The next day, after the storm had abated, Captain Bailey went ashore and discovered an outcropping of limestone and an abundance of timber. Knowing his employer might be interested in these resources, Captain Bailey took aboard samples of the stone along with pine, maple, and beech specimens. After pulling up anchor, Captain Bailey left the small harbor to which his name would henceforth be applied.

Upon returning to Milwaukee, Captain Bailey shared his findings with his boss, Alanson Sweet, who had started as a stone mason, but was now involved in a variety of activities including politics, shipping, and construction. Sweet must have been impressed with the prospects Baileys Harbor presented as the following year he purchased 125 acres around the bay and not long thereafter dispatched men to establish a small settlement and build a pier, sawmill, and quarry. Using his political connections, Sweet succeeded in having Door County created, with Baileys Harbor serving as the county seat.

All that prevented Baileys Harbor from being an important harbor was a lighthouse to guide vessels past the reefs hiding at either side of the bays opening to Lake Michigan. Congress not only agreed to build a lighthouse at Baileys Harbor but also awarded the contract to Sweet. A small island, situated along the eastern shore of the harbor and now known as Lighthouse Island, was purchased from Alexander Mitchell in November 1851 for $100 to serve as the site for the lighthouse.

Construction of Baileys Harbor Lighthouse began in 1852. With lake levels being extremely low that year, the work crew was able to transport the building materials directly to the island using horse-drawn wagons. Limestone from Sweets own quarry was used to construct the tower and attached one-and-a-half-story keepers dwelling. The tower, which measures fifty-two feet from the ground to its focal plane, has walls that taper from a thickness of three feet at the base to two feet at the lantern. Both the tower and dwelling were stuccoed and white-washed.

The third to be built in Door County, after the ones at Plum Island and Rock Island, Baileys Harbor Lighthouse was originally equipped with a fixed, sixth-order Fresnel lens but was upgraded with a fifth-order lens in 1858. The towers most notable characteristic is its birdcage lantern, one of four lighthouses in the United States still equipped with this antiquated style of lantern.

David Ward was appointed the first keeper of Baileys Harbor Light on February 10, 1853, and the lighthouse went into operation at the opening of navigation later that year. Ward was replaced in September 1854 by Michael Green, who served as keeper for only six months, before passing away in March 1855. Greens successor, Newton Bacon, kept the light for nearly seven years before being replaced by William Mitchell.

In August 1863, the Lighthouse Board appointed William Darling keeper and transferred Mitchell to another lighthouse. Born in 1820, Darling had served in the Mexican-American War and enlisted in the Sixth Regiment Wisconsin Infantry, part of Wisconsins noted Iron Brigade, during the Civil War. Darling had his foot amputated as a result of an injury suffered at the Battle of Antietam. After being honorably discharged in January 1863, Darling briefly served as a postmaster before accepting the higher-paying position of keeper of Baileys Harbor Light.

Surrounded by hazardous shallows and reefs at the southeast side of the bay, Baileys Harbor Lighthouse served to mark the entrance to the harbor but provided little guidance to vessels seeking safe anchorage. During the increased shipping activity following the Civil War, the harbor developed a negative reputation as a result of the grounding of many vessels while trying to enter the harbor. A pair of lights at the head of the bay was desperately needed to keep ships in the proper channel and away from the dangerous reefs.

In 1866, an inspector for the eleventh Lighthouse district announced that Baileys Harbor Lighthouse was in very defective condition and required rebuilding. An appropriation of $15,000, three times the original cost of the lighthouse, was granted on March 2, 1867, and the Lighthouse Board published the following on Baileys Harbor later that year:

An appropriation is now available for rebuilding this station. The necessary materials will be landed at the site before the close of navigation this fall, and the work commenced early in the spring and finished during the season.

This is the only harbor of refuge on the western shore of Lake Michigan, between Milwaukee and Port du Mort. It affords an excellent shelter and good anchorage in northerly and easterly winds. The present light-house marks it, and at the same time serves a valuable purpose as a coast light for vessels keeping the western shore while running down the lake. But the numerous shoals at the entrance make it a difficult task to enter the harbor, even in day-time, and almost impossible at night. Several vessels have been wrecked in attempting it, and the harbor is consequently in bad repute.

Just as work was set to begin on Baileys Harbor Lighthouse, the Lighthouse Board reconsidered its plan. Realizing that the stations location within the bay prevented it from serving as either an effective coast light or as a guide to vessels seeking the safety of the harbor, the Board proposed that a new station be constructed on exposed Cana Island, three miles northeast of the harbor, and that a pair of range lights be established to light the way into the harbor. Congress granted an additional $6,000 to cover the cost of the range lights on July 20, 1868, and thirty-two acres of land at the head of the harbor were purchased from the State of Wisconsin later that year to serve as home to the beacons.

On December 1, 1869, the final day of navigation for the season, Keeper Darling extinguished the light in Baileys Harbor Lighthouse for the last time. The range lights in the harbor and the lighthouse on Cana Island were completed during 1869 and would take over the function of marking Bailey Harbor and lighting the coast starting in early 1870.

Baileys Harbor Lighthouse and the attached dwelling remain standing today thanks largely to the workmanship of Alanson Sweet, though the lantern is in an advanced state of decay. Today, the island is privately owned, and the dwelling serves as a summer cottage.

For a larger map of Baileys Harbor Lighthouse, click the lighthouse in the above map.

From Highway 57 just north of Baileys Harbor, turn east on Ridges Road and follow it as it wraps around to the far side of the harbor, passing Baileys Harbor Yacht Club. Where the road makes a sharp left turn, go straight on the dirt road and you will see the island and lighthouse off to your right.