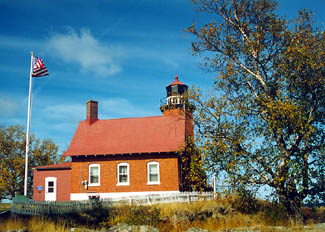 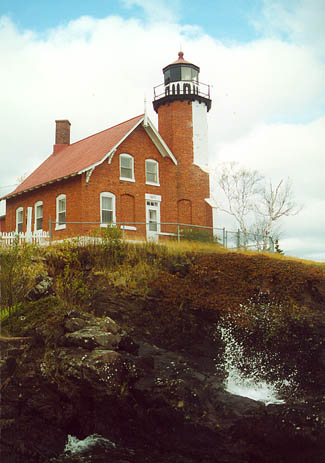 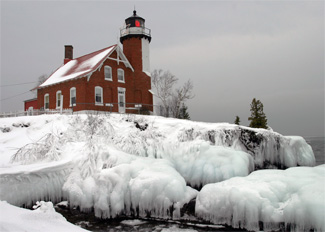 On March 3, 1849, Congress appropriated $4,000 for a lighthouse at Eagle Harbor but also requested that the Secretary of the Navy appoint a commander to determine the necessity of the light along with two others for which funds had been provided. Commander Bigelow reported in favor of a light at Eagle Harbor, and during 1850, a one-and-a-half-story, stone dwelling, topped by a short wooden tower and an octagonal iron lantern, was built on the western side of the entrance to the harbor. The keepers dwelling measured thirty-six by thirty-four feet and featured five rooms. Eight lamps, set in fourteen-inch reflectors were used in the lantern room to produce a fixed white light at a focal plane of forty-seven feet above Lake Superior. John Griswold served as keeper of the light from the time it was first exhibited in 1851 until he became keeper of the newly built Eagle River Lighthouse in 1859.

In 1857, a fourth-order, L. Sautter Fresnel lens was installed in the lantern room. While the lens was fixed, two panels, mounted on a frame, revolved around the lens to produce a flash every two minutes.

The stone dwelling was ill-suited for the freeze-and-thaw cycles of such a northern clime, and in 1868, the Lighthouse Board requested $14,000 for a new lighthouse after providing the following details on the current structure:

The light-house buildings at this place are in very bad condition, and have been so for several years. The dwelling is built of rubble stone, laid together in the rudest manner. It is surmounted by an octagonal wooden tower, with a lantern of the oldest pattern, having small panes of glass, and heavy sash bars, which obstruct the light. It is recommended that this station be rebuilt

Congress appropriated $14,000 for repairs and renovation of Eagle Harbor light-station on July 15, 1870, and over the next year, a one-and-a-half-story, seven-room dwelling was constructed with a tower rising from its northeast corner. Built of red brick, the tower is ten feet square at its base, but midway up, its corners are beveled to create an octagonal form. The lighting apparatus from the old lighthouse was transferred to the new decagonal lantern room, where it was mounted atop a cast-iron pedestal.

More than one veteran of the Civil War served as keeper of Eagle Harbor Lighthouse, starting with Peter C. Bird, who took charge of the light in 1865. Bird was born in Romulus, Michigan in 1841 and marched off to fight in the Civil War in 1862. During the Battle of Gettysburg, he was wounded in the thigh and, according to family lore, lay on the battlefield for four days before he was discovered and carried off under cover of darkness by his brother Robert. This heroic act is depicted in the massive painting at the Gettysburg Cyclorama, where Robert, with his arm in a sling, is seen helping Peter, whose right leg is bandaged just above the knee. After recovering from his wound, Peter married Mary Jane Morris before moving to Eagle Harbor and caring for the light there for nine years. Peter and Mary Bird witnessed the construction of the new lighthouse and had their first three children at Eagle Harbor, before Peter returned to Romulus and took up farming.

Stephen Cocking, who was appointed keeper at Eagle Harbor in 1877, was born in England in 1836 and came to American when he was eleven. At the age of sixteen, he moved to Eagle River and worked in the South Cliff Mine for three years and then with the Copper Fall Mining Company for six years. Cocking enlisted in the twenty-third Michigan Volunteer Infantry Regiment in August 1862, but after the Civil War, he returned to Keweenaw Peninsula and served eight years at Gull Rock Lighthouse before being transferred to Eagle Harbor. Keeper Cocking passed away at the lighthouse of pneumonia in 1889.

In 1890, the Lighthouse Board noted that a steam fog signal would be a valuable addition at Eagle Harbor, but it wouldnt be until March 2, 1895 that Congress provided $5,000 for its construction. The following description of the work carried out on the fog signal in 1895 appeared in the annual report of the Lighthouse Board:

Bids were accepted for furnishing the material for a fog signal, and the material was furnished. The construction of the fog signal by hired labor was begun in September, excavations were made, concrete footings were put in, and foundation walls were built. The building was framed, exterior walls and roof were covered with plank, the cornice was ironed, the interior walls were sheathed, and the filling of the walls with sawdust and mortar was done. The iron roof was put on and the grading was done around the building. A water-supply crib 12 by 24 feet was framed, the ironing of the entire building was finished, tank erected, workbench and tool closet built, concrete floor laid, interior painting completed, boilers and appurtenances set up and tested to 80 pounds pressure, water-supply pipes placed, and pipe fitting done for pumps and Crosby signals. The water-supply and landing crib was sunk in place, ballasted, and built to 3 feet 9 inches above lake level, a house was built over the supply well, and a trestle walk to the engine house was constructed. The building was completed in November. The Crosby automatic signals were erected, the plank walks around the signal house were completed, and the entire station was completed according to plans. On November 30, 1895, the fog signal at this station was established.

The ten-inch steam whistle was in operation for roughly 300 hours each year and consumed around 26 tons of coal, but in 1907, the fog signal blasted for a record 544 hours, while being fed 43 tons of coal. A thirty-foot-long, rubblestone seawall was built in front of the fog signal building in 1903, and in 1905, a three-foot-square brick chimney replaced the iron smokestacks formerly used. An air diaphone was installed in the fog signal building in 1928, and the following year a radiobeacon was established at the station as an additional aid to mariners navigating in thick weather.

At the opening of navigation in 1894, the period of the flash that accompanied Eagle Harbors fixed white light was reduced from two minutes to one minute. As Eagle Harbor Light was of great importance to steamers sailing between Duluth and Sault Ste. Marie, the Lighthouse Board contemplated upgrading it to a second-order light in 1897, but this was never carried out. The intensity of the light was increased roughly eight-fold on June 20, 1913, by changing the illuminant from oil to incandescent oil vapor. In 1924, ruby glass was placed over one of the flash panels, changing the lights characteristic to a fixed white light with alternating red and white flashes. The lighthouse itself was made more visible to mariners during daylight hours, when the side of the redbrick tower facing the lake was painted white on April 13, 1925. The Coast Guard replaced the fourth-order Fresnel lens in 1962 with a pair of DCB-224 aerobeacons that produce alternating red and white flashes.

The two wooden residences near the lighthouse were originally built at a nearby Coast Guard station but were floated across the bay when that station closed to provide additional housing for the lighthouse keepers. An assistant keeper was assigned to Eagle Harbor in 1895, when the fog signal was built, and a second assistant was added in 1913.

In 1967, Albert Stridfelt retired as the last civilian lighthouse keeper in Michigan, after nearly thirty years of service. His lightkeeping career started with short stints at Rock of Ages Lighthouse and Harbor Beach Lighthouse, before he was assigned to Eagle Rock Lighthouse in 1940. Stridfelt replaced Edward Byttyla as head keeper of the light in 1962.

Eagle Harbor Lighthouse was de-staffed on January 8, 1982, when Jerry McKinney, who had been serving there for less than a year, was transferred. This change left Two Harbors Lighthouse in Minnesota as the only staffed lighthouse on Lake Superior. The Keweenaw County Historical Society was granted temporary stewardship of the lighthouse property in 1982 and then full ownership in 1999, after the Coast Guard excessed the station. The society maintains four museums at the light station: a keepers museum in the lighthouse, a maritime museum in the fog signal building, a fishing museum in the white keepers dwelling, and a Keweenaw history museum in the stations garage. The brown light keepers cottage near the lighthouse is available for week-long rentals.

Located on the western entrance to the harbor in Eagle Harbor, on the northern shore of the Keweenaw Peninsula.
Latitude: 47.4598, Longitude: -88.15913

For a larger map of Eagle Harbor Lighthouse, click the lighthouse in the above map.

Keweenaw Historical Society runs a museum in the lighthouse that is open daily from mid-June to early October.