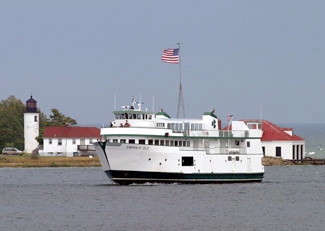 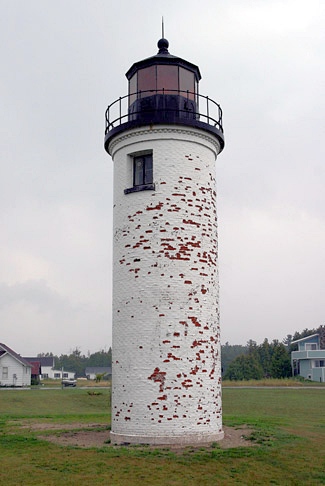 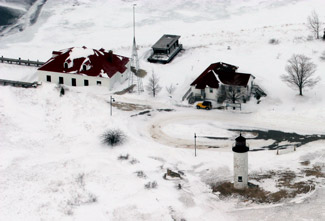 Beaver Island, named for its once prevalent beavers, is the largest island in Lake Michigan and one of fourteen islands that make up the Beaver Island Archipelago. It was to this island that four-year-old Elizabeth Whitney was brought by her parents in 1848, the same year that James Strang arrived with his followers. Strang claimed that Joseph Smith, founder of the Mormon religion, had appointed him as his successor, just a few days before Smith was assassinated. After settling in Wisconsin for a brief period, Strang moved his followers to Beaver Island, where in 1850 he was crowned king of his people. Tensions between the Strangites and the non-believing gentiles on the island steadily grew until most of the latter, including the Whitneys, abandoned their property and fled for their lives in 1852. The Whitneys settled in Charlevoix, but following a skirmish with several Strangites who had come seeking one of their members, the family relocated to Traverse City.

Strang was elected to the Michigan Legislature in 1853 and was still serving as a representative when he was shot on Beaver Island on July 16, 1856 by two of his followers. Strang was taken back to Voree, Wisconsin, where he passed away a few weeks later in the company of his estranged first wife. Just four days before Strangs passing, a drunken mob of gentiles arrived at Beaver Island and evicted all Strangites. Left leaderless, the Strangites slowly dwindled in number, but evidence of their time on the island remains. The northern end of Beaver Island is part of St. James Township, named after James Strang; the main road leading south from the harbor is known as The Kings Highway; and the Old Mormon Print Shop, which printed the first newspaper in Northern Michigan, is now home to a museum run by the Beaver Island Historical Society.

In 1857, Elizabeth Whitney, who preferred to remain in Traverse City where she could attend school, reluctantly returned to Beaver Island with her family. As their ship entered the islands main harbor, Elizabeth noted something new on the point, a lighthouse. Congress had appropriated $6,000 on August 3, 1854 for a lighthouse to mark the fine harbor, and the brick structure was erected in 1856 and equipped with a sixth-order Fresnel lens that beamed forth a fixed white light. Soon after her return to the island, Elizabeth Whitney visited the lighthouse and met Keeper Lyman Granger and his wife. Before becoming the first keeper at Beaver Harbor Lighthouse, Keeper Granger had served at Bois Blanc Lighthouse.

Peter McKinley, a nephew of President William McKinley, was put in charge of the light in 1859 and served for a decade. Shortly after his appointment, Keeper McKinley became ill, but his two young daughters, Effie and Mary, helped him fulfill his responsibilities. The Lighthouse Board reported the following in 1867 regarding Beaver Island Harbor Lighthouse:

This excellent harbor of refuge, accessible with all winds and affording shelter to large fleets of vessels during the gales of spring and fall, is but indifferently lighted. A steamers lens, exhibited from a low tower with a lantern of old and inferior pattern, affords but a very dim light. The tower walls (of brick) are badly cracked, and the tower, which is joined to the dwelling by a passage way, does not rise above the roof of the latter. It is proposed to improve this station by building a new and higher tower, repairing the dwelling, putting a new roof upon it, and supplying a more effective lens.

After $5,000 was provided by Congress on July 20, 1868, a new cylindrical brick tower was built in 1870 and equipped with an iron stairway and a new lantern room, which housed a fourth-order Fresnel lens. The characteristic of the new light was fixed red instead of fixed white.

In 1860, Elizabeth Whitney married Clement Van Riper, who had moved to the island from Detroit for his health. The couple lived on the point near the lighthouse where Clement had erected a large cooper shop. When Keeper McKinley resigned in August 1869, Clement was appointed in his place. The following spring, workmen arrived to build the new tower, repair the old dwelling, and add a new brick kitchen. By this time, Elizabeths parents had moved into the abandoned James Strang home, which her father had helped build when first on the island.

As her husbands health was poor, Elizabeth often cared for the light. On stormy nights I watched the light that no accident might happen, she wrote. We burned the lard oil, which needed great care, especially in cold weather, when the oil would congeal and fail to flow fast enough to the wicks. In long nights the lamps had to be trimmed twice each night, and sometimes oftener.

Elizabeths three brothers were seamen on Lake Michigan, and it gave her great pleasure to think that their eyes might catch the bright rays of her light shining out over the waste of waters on a dark stormy night. On one such dark night, Clement and Elizabeth heard the flapping sails of a vessel in distress. After a protracted struggle, the Thomas Howland reached the harbor but was leaking so badly that she soon sank. Keeper Van Riper and the first officer of the ship lost their lives trying to rescue those aboard the Thomas Howland. Only those who have passed through the same know what a sorrow it is to lose your loved one by drowning and not be able to recover the remains, wrote Elizabeth. It is a sorrow that never ends through life.

Life to me then seemed darker than the midnight storm that raged for three days upon the deep, dark waters, Elizabeth recalled. I was weak from sorrow, but realized that though the life that was dearest to me had gone, yet there were others out on the dark and treacherous waters who needed to catch the rays of the shining light from my light-house tower. Nothing could rouse me but that thought, then all my life and energy was given to the work which now seemed was given me to do. A few weeks after her husbands passing, Elizabeth received her official appointment as keeper of the light. Elizabeth would later lose two brothers and three nephews to the sea. Through all the heartache, her motto remained:

There are many that have left us,
Never more will they return;
Left our hearts with sorrows aching,
Still our lamps must brightly burn.
Elizabeth married Daniel Williams in 1875 but continued to serve as keeper of Beaver Harbor Lighthouse until 1884, when she was transferred to the mainland to serve as the first keeper of Little Traverse Lighthouse. While at her new home, she penned her best-selling book A Child of the Sea and Life among the Mormons, in which she described her departure from Beaver Island to become keeper at Little Traverse Lighthouse. As we steamed so fast away, we looked back to watch its white shores with beautiful green trees in the background and the pretty white tower and dwelling of our light-house, which soon could be seen no more only in sad, sweet memories.

In June 1890, the steam-barge Ruby arrived at Beaver Harbor Lighthouse, and workers filled in the cellar under the dwelling, converted a shed into a summer kitchen, and built a new shed along with a seven-foot-square wooden oil house. In 1895, the dwellings cellar was re-excavated, and a five-inch-thick concrete floor was laid.

Ernst E. Winter, the lights last keeper, had the longest stint as keeper, serving from 1899 until 1927. The 1930 Census lists his age as seventy-two and his occupation as Custodian of the lighthouse.

During the winter of 1941  1942, the keepers brick dwelling was torn down. In 1942, the name of the light was officially changed to St. James, and spar buoys were placed to mark the entrance to the harbor. St. James Light was electrified in 1949. In 2000, St. James Township was granted a renewable ten-year lease for the brick tower, which still contains its fourth-order Fresnel lens. Under the provisions of the National Historic Lighthouse Preservation Act of 2000, Beaver Island Harbor Lighthouse was offered for free to eligible government entities and non-profit organizations, and the lighthouse was officially awarded to St. James Township in 2005.

For a larger map of Beaver Island Harbor (St. James) Lighthouse, click the lighthouse in the above map.

The lighthouse is owned by St. James Township. Tower closed.


Before taking the ferry out to Beaver Island, I would recommend reading Elizabeth Williams' A Child of the Sea and Life among the Mormons. The book, which can be read online here, provides a good summary of the history of Beaver Island and Elizabeth's time as keeper of Beaver Island Harbor Lighthouse.